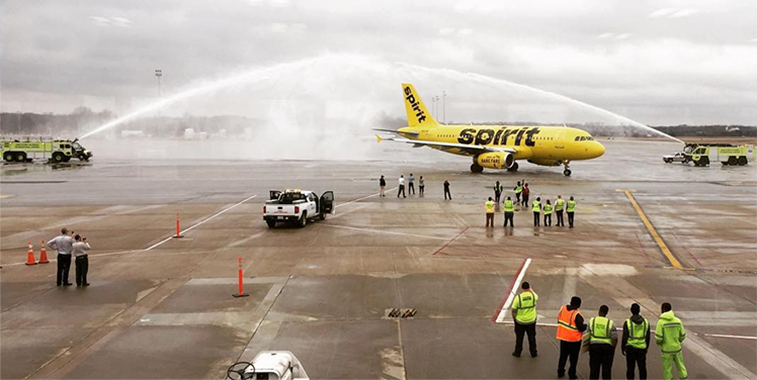 Spirit Airlines started flights from Fort Lauderdale to Columbus on 15 February, with the latter airport greeting the service with a water arch salute. Columbus is one of six new routes that will start from Fort Lauderdale this year courtesy of Spirit, while Akron-Canton will unfortunately be dropped from the route map in 2018. Overall Spirit carried 6.31 million passengers on Fort Lauderdale services in 2017, up by over 10% versus the year before.

Spirit Airlines is one of the leading carriers at Fort Lauderdale, handling some 6.31 million passengers at the Floridian airport last year. The city is the largest airport for Spirit in terms of seats (3.95 million one-way seats in 2017), with its offering being 85% larger than the carrier’s second-busiest airport Las Vegas (2.13 million). Currently Spirit is Fort Lauderdale’s third-largest operator, sitting behind JetBlue Airways (8.11 million passengers in 2017) and Southwest Airlines (6.40 million). In 2016, Spirit was Fort Lauderdale’s second-biggest operator, with Southwest third. So while Spirit managed to grow its passenger count by 10% last year (more detail below), Southwest increased its traffic throughput by nearly 26% according to data published by the airport, having handled just 5.10 million passengers in 2016. JetBlue also grew faster than Spirit from Fort Lauderdale last year, seeing its traveller count climb by over 11%. Despite Spirit now sitting third in the airport’s carrier rankings, it is well ahead of fourth-placed carrier Delta Air Lines, with the SkyTeam member having flown 3.32 million passengers from the Floridian city in 2017, an increase of only 0.3% over its 2016 figure.

Now over the six million threshold

Last year Spirit greeted just over 6.31 million passengers at Fort Lauderdale in 2017, an increase of over 10% versus the result of 5.73 million passengers in 2016. The airline’s passenger numbers from Fort Lauderdale have certainly accelerated in recent years, with the average rate of growth from 2014 to 2017 being 10%. This compares to an average of only 0.5% from 2008 to 2013. 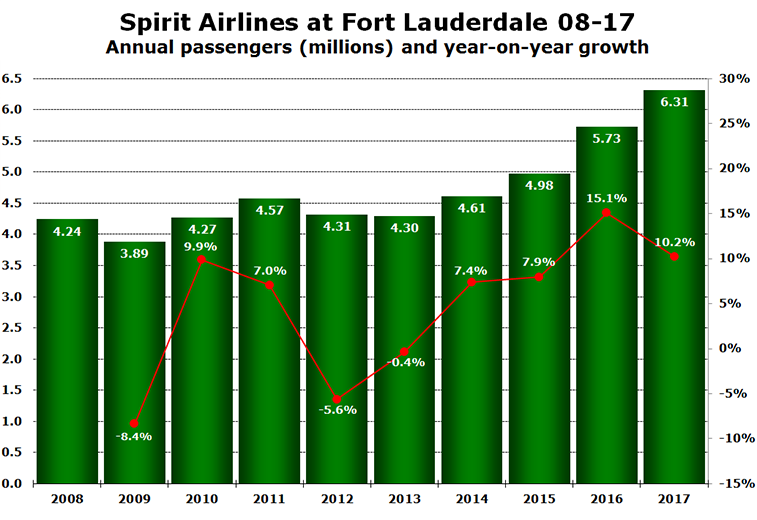 While the full picture of the traffic data is not clear for 2017, anna.aero can confirm from data retrieved from the Bureau of Transportation Statistics (BTS), that around 75% of the 5.73 million passengers in 2016 flew on domestic services. This market saw its share grow by 1.6 percentage points when compared to the traffic results of 2015. Nonetheless, the domestic market’s share of traffic has been situated between 70% and 75% during the time period analysed, meaning that Spirit is trying to grow its domestic and international markets from Fort Lauderdale at a balanced rate.

When referencing OAG schedules, it appears that Spirit has added an extra seven weekly departures to Atlanta from Fort Lauderdale this summer. With that, it means the connection to the world’s busiest airport is now the carrier’s leading service from its Florida base, pushing New York LaGuardia into second position. Along with Atlanta, a further two routes in the top 12 (highlighted in green) have seen increases in weekly frequencies this summer, while New York Newark and Detroit (highlighted in red) have seen reductions versus last year’s schedule. Along with these two destinations, the only other route that Spirit operates from Fort Lauderdale which has seen a capacity reduction during the past year is Plattsburgh in New York state (49th largest route), with it seeing its weekly frequency reduce from three in S17 to two this coming summer. 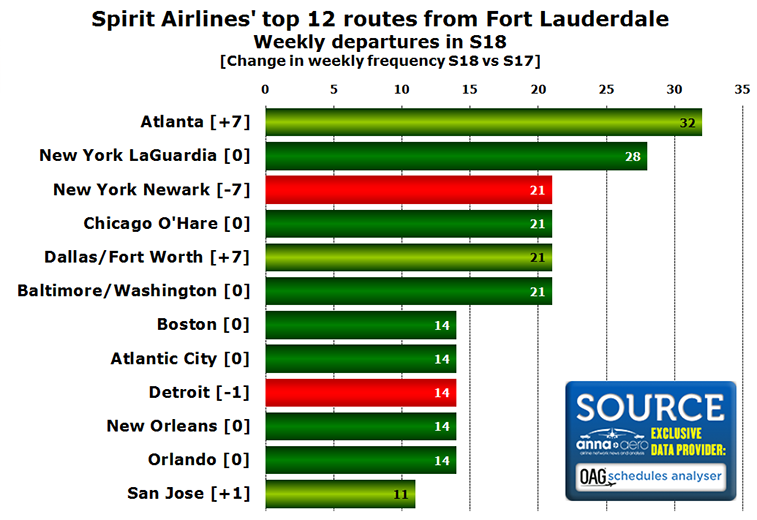 At the peak of this summer, the airline will be offering 53 routes from Fort Lauderdale, with 39 of these seeing at least a daily rotation.The total number of destinations this summer is a net increase of five from the 48 it operated in S17. In 2018 the airline has opened, or will soon open, the following routes from its leading base: Columbus (launched 15 February); Richmond (launching 15 March); Guayaquil (22 March); Cap-Haïtien (12 April); Seattle-Tacoma (12 April); and St. Croix (24 May). Unfortunately one route appears to be leaving the airline’s schedules at Fort Lauderdale, with the last flight to Akron-Canton expected to be flown on 11 April according to OAG data and the carrier’s booking engine.

Overall Spirit will operate 466 weekly departures from Fort Lauderdale this summer, an increase of 58 rotations versus the 408 it offered during the same week of July in 2017. Of the 58 additional departures, plus the nine rotations freed-up by the cuts to Newark, Detroit and Plattsburgh (meaning a total of 67 departures), only 34 (51%) are being utilised to new destinations, with the remaining 33 being used to operate additional frequencies to existing destinations on the network. In total 12 existing routes from Fort Lauderdale have seen extra weekly flights being added this coming summer, with the average increase being 2.9.

Spirit will be offering around 67 departures and arrivals a day from Fort Lauderdale this summer. When referring to the carrier’s schedules, there are a few aircraft that appear to perform overnight flying into the base. When looking at 20 July as an example, on that particular day there are eight arrivals before the first departure at 06:00. Analysing the origins of the arrivals before 06:00, they are from airports including Los Angeles, Guayaquil, Lima and Panama City, with these being some of the longest sectors being offered by the carrier from Fort Lauderdale. 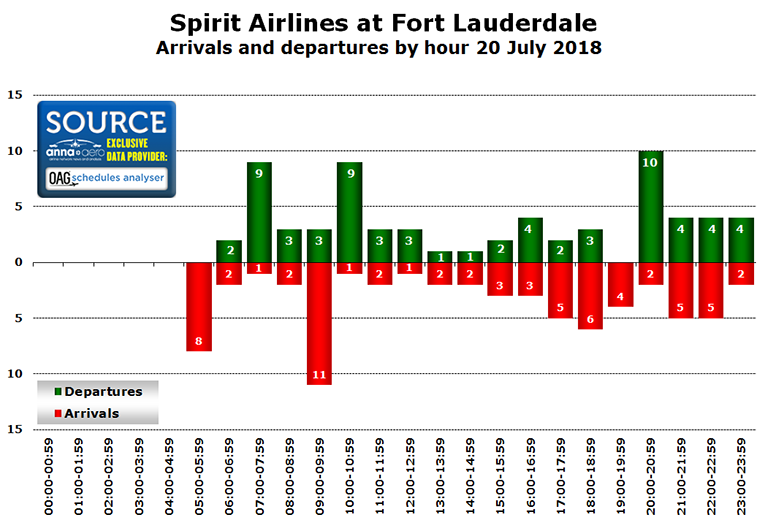 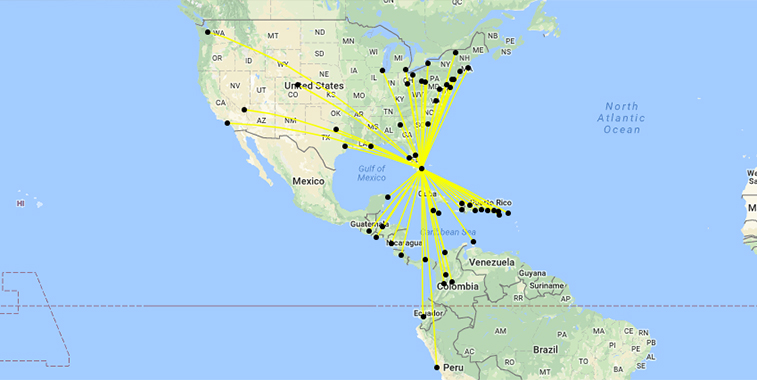 Spirit Airlines’ S18 route map from Fort Lauderdale consists of 53 destinations, an increase of five versus the 48 routes flown in S17. New airports on the menu this summer from Spirit’s leading base include Columbus, Guayaquil, Richmond, Seattle-Tacoma, St. Croix and Cap-Haïtien in Haiti. Unfortunatley the good news also comes with a route casualty, as the last flight to Akron-Canton is poised to operate on 11 April.