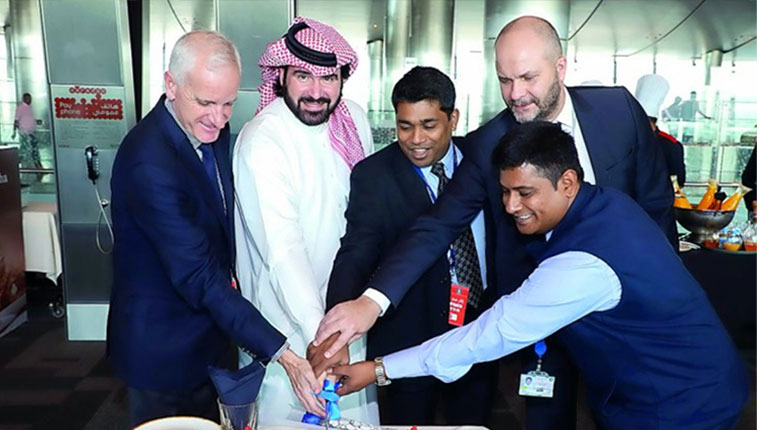 Doha Airport has certainly seen some schedule turmoil over the last 12 months, thanks to flying restrictions imposed on the country by some its neighbours like Bahrain, Egypt, Saudi Arabia and the UAE. However one bright spot for the Middle Eastern hub was the start of its partnership with Indian LCC IndiGo, which began flights to Qatar in May last year from Delhi and Mumbai, and now offers services from six airports in India to Doha.

Doha Airport, or Hamad International as its is also known, has already welcomed 120 million passengers since the beginning of its operations on 27 May 2014 until the end of 2017. Apparently, the Qatar Airways hub has also successfully recovered its passenger numbers with an average monthly increase of 3.8% in the second half of the year, after the initial drop in volume in June 2017 due to the restrictions imposed on the country by some its neighbours. With no published figures on the airport’s traffic we only have their word for it, so our data elves have analysed the airport’s capacity information instead.

Until last year, Doha was maintaining a robust double-digit annual growth profile, with the average capacity growth being 15% per annum between 2009 and 2016. However, the closure of airspace and services from airports and airlines in Bahrain, Egypt, Saudi Arabia and the UAE last June curtailed any hopes of this continuing in 2017, and also during this year. While annual one-way seats should have edged close to 30 million last year, instead they fell by nearly 4%, despite Qatar Airways’ best efforts to re-work its schedule, bringing forward capacity enhancements and route launches to help fill the deficit. 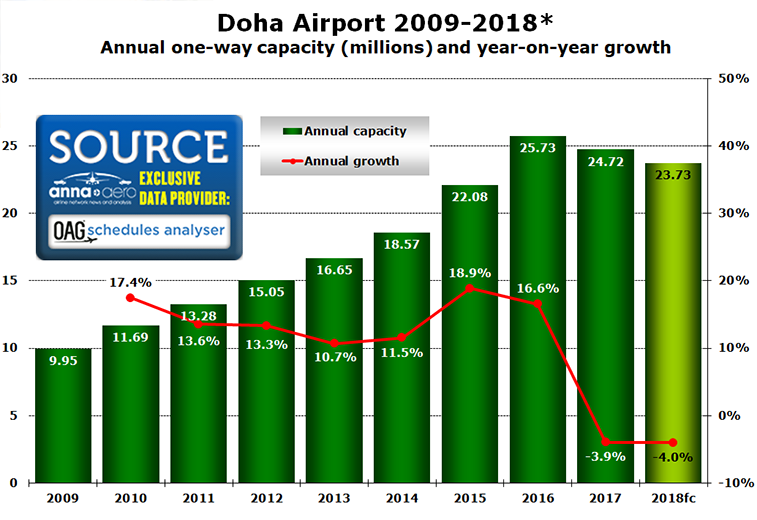 As suggested earlier, the airport is somewhat secretive over its traffic figures, unlike its fellow MEB3 hubs in Dubai and Abu Dhabi. The only traffic figures published on the airport’s website date back to Q1 2015, which indicated that Doha processed 7,360,308 passengers in those three months. OAG capacity for that period shows a two-way seat count of 10.3 million, giving the airport an overall load factor of 71.4%. Applying this load factor to the total two-way capacity for all of 2015 would imply an annual passenger throughput of 31.53 million in that year. Using the same methodology for 2016 and 2017 would indicate an annual traffic of around 36.74 million in the former period and 35.3 million last year, however the annual traffic reality for the latter is probably significantly lower. At present, according to data filed with OAG, the forecast for 2018 illustrates that the airport’s capacity will be down again, however its seems more likely that this year’s schedules at Doha are yet to be fully loaded, particularly in November and December.

Capacity come back on the cards in late 2018

The impact of the restrictions is perhaps more clearly identified in the following seasonality analysis. 2016 (light green line) shows a steady improvement in monthly capacity at the airport, driven in no small part by the route launches of #1 tenant Qatar Airways, which launched among others, new routes to Birmingham, Boston, Sydney and Zurich during the year. The result was a peak monthly capacity count in December of 2.32 million one-way seats. 2017 (medium green line) started well for the airport with an average increase in monthly capacity between January and May of 10%. It wasn’t until June of that year, which still managed to yield a 3% increase versus the same month in 2016, when the numbers began to take a downturn. During July to December 2017 the monthly one-way seat count dropped, on average, by 16%. 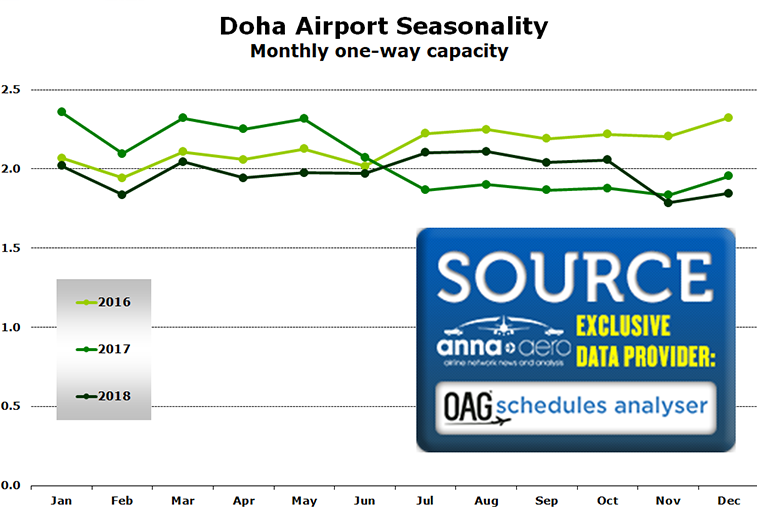 Looking at this year’s capacity (dark green line), the reverse pattern is happening, with monthly one-way seats being on average 12% lower than the same months of 2017 between January and June. In 2018, July appears to be a landmark month for the airport, as total number of seats starts to deliver year-on-year growth again. At this early stage, November and December data this year are still showing negative figures, but are expected to produce annual growth once the schedules of all the airport’s operating airlines submit their respective flying programmes.

Unsurprisingly, Qatar Airways is the largest carrier of the 25 airlines currently serving its base. Its weekly one-way seat tally is down by 5% versus the same week last year, as a result of the operational restrictions it continues to face. However, this capacity decline is not the big news, its more about the airlines no longer in the top 12 listing. Prior to the restrictions, this graph would have boasted Emirates (second; 18,120 weekly seats), flydubai (third; 9,576 seats), Gulf Air (fifth; 5,926 seats), Air Arabia (sixth; 4,704 seats), Etihad Airways (seventh; 4,404 seats), EGYPTAIR (ninth; 2,780 seats) and Saudi Arabian Airlines (10th; 2,773 seats). 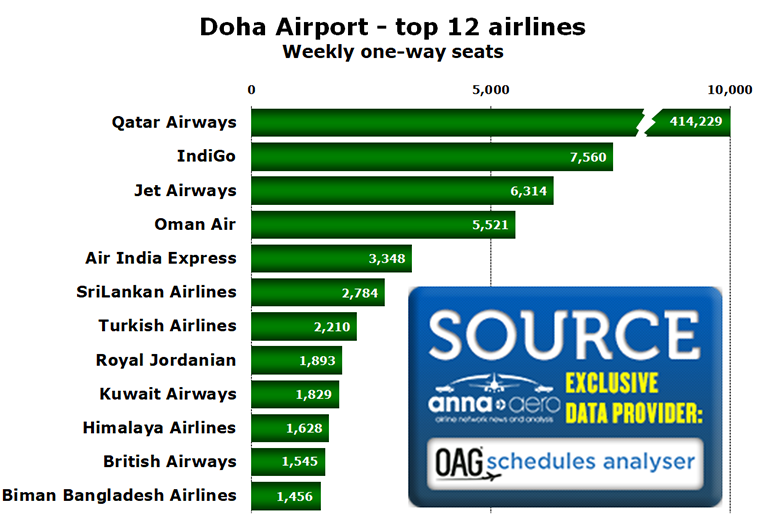 This airline exodus at Doha has provided opportunities for other carriers to exploit, none more so than Indian LCC IndiGo which has leapt from nowhere to become the airport’s second biggest airline. This rapid rise has come courtesy of six new services over the past 12 months, all of which are operated daily – Delhi and Mumbai (both launched 5 May 2017); Chennai and Kozhikode (20 July 2017); and Hyderabad and Kochi (21 December). IndiGo’s expansion at Doha has seen #3 carrier Jet Airways contract at the airport, as it offers 18% less seats this March than it did a year ago. Other airlines in this year’s top 12 have also attempted to take advantage of the current situation, with Royal Jordanian providing 105% more seats than last March, with Kuwait Airways (+72%), Turkish Airlines (+55%) and Biman Bangladesh Airlines (52%) also growing.

Similar to the airline rankings above, Doha’s top 12 route story is also one of massive upheaval. Last year Kuwait City was the airport’s fifth most important route when considering weekly one-way seats, however the political situation has changed its relevance markedly. It is now the #1 city pair, replacing Dubai which has disappeared altogether from Doha’s schedules, despite the UAE city offering close to 50,000 weekly seats in March 2017. In a comparable situation, Muscat has jumped from eighth to third. 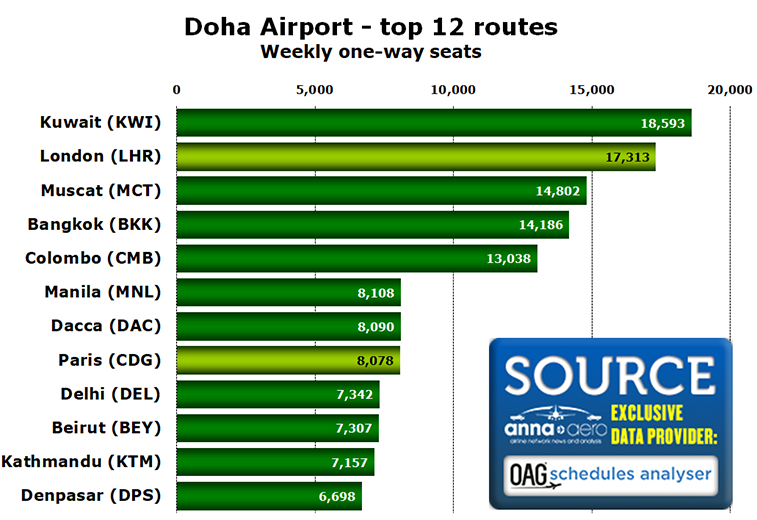 Looking ahead to the remainder of 2018, the airport is expecting to see new services to Thessaloniki (launches 27 March), Hatay (4 April), Cardiff (1 May), Mykonos (30 May) and Las Vegas (27 June), all courtesy of home carrier Qatar Airways. Other destinations on the to-do list, which have been mooted by the oneworld carrier, but are yet to have an official start date put next to them, include Abidjan, Accra, Chittagong, Lisbon, Malaga, Mombasa and San Francisco. The number of Middle East destinations offered from Doha Airport in March 2017 was 28, a year on this has fallen to just 12 as a result of the restrictions imposed upon Qatar by some of its neighbours.