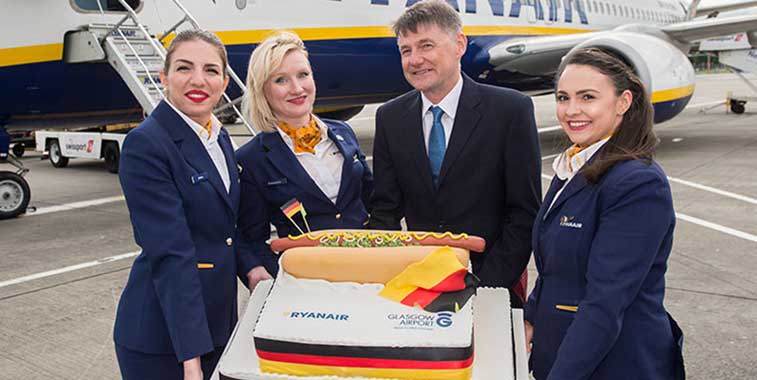 The capacity available on services between the UK and Germany increased by 17% from 2008 to 2017. The country pair has now seen six consecutive year-on-year increases in seat numbers. Ryanair introduced a number of UK links from its new Frankfurt base last year, including this service to Glasgow which began on 5 September. The Irish ULCC was the fourth largest capacity provider in the UK-Germany market in 2017. As a result of Ryanair’s recent announcement on the closure of its Glasgow base this city pair will be withdrawn in W18/19, however Lufthansa is starting the route in S18.

Seat numbers in the UK-Germany market received a 3.4% boost in 2017, increasing to 19.36 million from 18.72 million in 2016. Compared to other European country pairs anna.aero has analysed recently, capacity between the UK and Germany lags behind the 32 million seats offered in the Germany-Spain market in 2017. However, the UK-Germany segment leads other recently analysed European markets including Italy-Spain, France-Italy and France-Germany which saw 15.92 million, 13.07 million and 10.55 million seats available respectively last year.

Seat capacity between the UK and Germany increased by 17% from 2008 to 2017, matching the percentage growth experienced in the France-Italy market and eclipsing the 1.2% reduction witnessed between France and Germany. However, the UK-Germany market could not match the percentage growth experienced in the Germany-Spain and Italy-Spain segments where seat numbers increased by 28% and 30% over the same period. Since 2008 there have only been two year-on-year capacity cuts between the UK and Germany, with the most severe taking place in 2009 when seat numbers were reduced by 5.1% as the global economic downturn took hold. The following year saw capacity rebound, before another marginal cut took place in 2011. Since then there have been six consecutive years of seat increases in this country pair market. From 2014 to 2017 capacity rose from 17.00 million to 19.36 million seats, an increase of 14%. 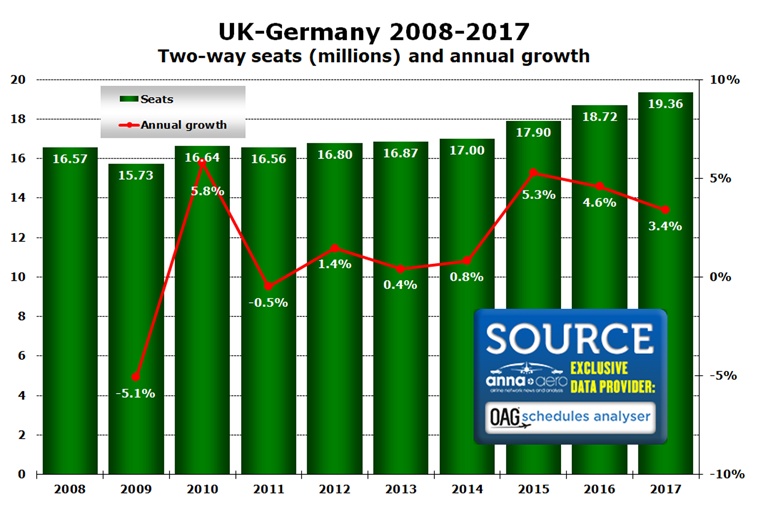 The average capacity on flights between the UK and Germany has been gradually increasing over the past 10 years. In 2008 it was 125 seats per flight, but by 2017 this had increased to 144 seats per departure. Services operated by narrow-body aircraft accounted for 88% of all departing seats in the market in 2017, with regional types providing a further 11%. A minimal number of seats were flown on wide-body types, with British Airways (BA) using 767-300s on some of it London Heathrow to Frankfurt sectors. OAG data shows that BA will operate 767-300s on six of its 45 flights scheduled for this airport pair during the week commencing 6 March.

The top 12 airports in this country pair based on departing seats in 2017 feature seven facilities in Germany and five in the UK. This analysis classifies four airports as the main hubs in this market: Frankfurt and Munich in Germany and Heathrow and London Gatwick in the UK. These hubs occupy three of the top four positions in the airport league table. The seven largest airport pairs by capacity between the UK and Germany in 2017 serve at least one of the four hubs. The largest routes involved links between the three biggest hubs in the market: Heathrow-Frankfurt supported over one million one-way seats, followed by Heathrow-Munich with more than 800,000. 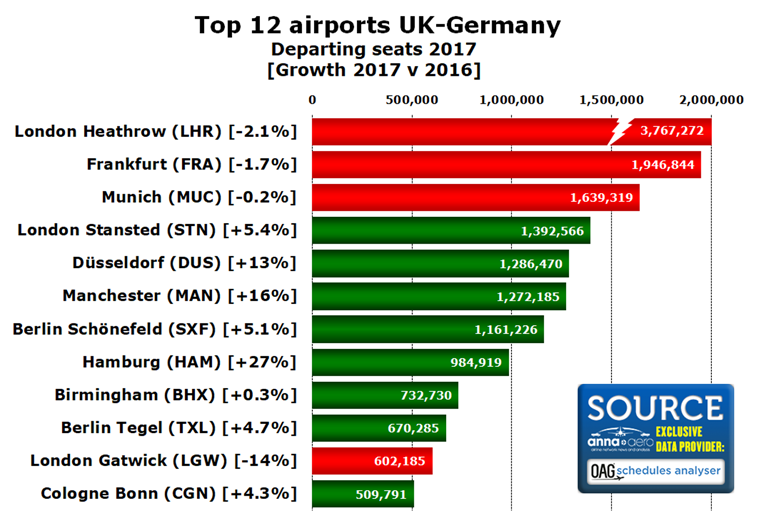 Heathrow was the single largest departure point in the UK-Germany market last year, accounting for 19% of all seats. The highest-ranked non-hub was London Stansted which finished fourth. Three of the top 12 airports served London, with their combined capacity accounting for 30% of all departing seats in 2017. Eight of the top-ranked airports experienced an increase in departing seats in this country pair last year. The largest year-on-year increases were seen at Hamburg (27% growth), Manchester (16%) and Düsseldorf (13%). A significant portion of the capacity growth at Hamburg was due to Ryanair operating services to Stansted and Manchester for a full year, having only commenced these routes at the tail end of 2016, during the W16/17 schedule. Three of the top 12 airports (highlighted in red) experienced a contraction in capacity between the UK and Germany in 2017. The largest cuts came at Gatwick, where Norwegian’s decision to discontinue its link to Berlin Schönefeld at the end of W16/17 resulted in a 14% reduction in capacity to Germany over the course of the year.

Non-hub airports have consistently processed more departing seats between the UK and Germany than the four main hubs combined over the past 10 years, indicating strong demand for point-to point connections in this market. In 2008, non-hubs accounted for 61% of departing seats. This representation fell to 53% in 2012 before rebounding to 59% in 2017. From 2008 to 2017, the seats departing from non-hubs increased from 10.15 million to 11.40 million, a growth rate of 12%. Over the same period, the capacity available for the four main hubs increased by 24% from 6.42 million seats to 7.96 million. 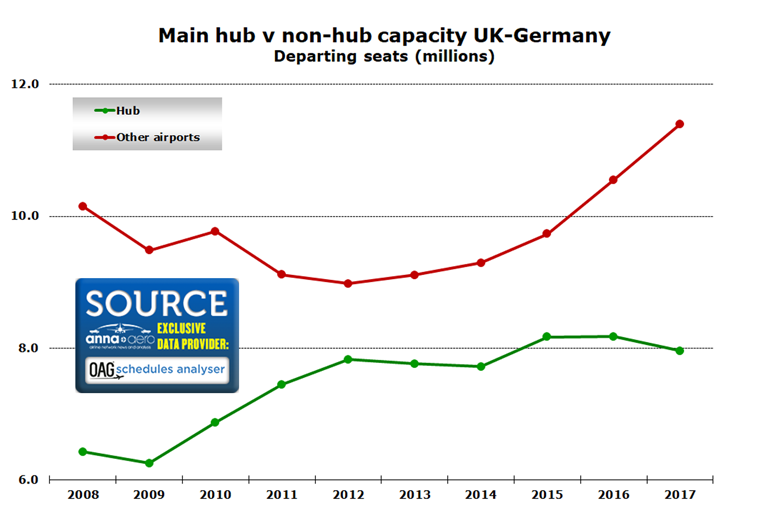 Lufthansa provided the most capacity in the UK-Germany market last year, closely followed by BA. The two flag carriers accounted for 44% of all seats in this segment in 2017. The vast majority of capacity between the UK and Germany was provided by just six airlines, with Eurowings, Ryanair, easyJet and Flybe joining the two national carriers at the top of the rankings. Between them these six operators accounted for 98% of the seats available in the market in 2017. In total, six of the top 12 airlines were British, three were German and three were foreign carriers operating services under seventh freedom rights. The largest of these was Ryanair, which offered 3.16 million seats between the two countries on direct services outside of its home market. 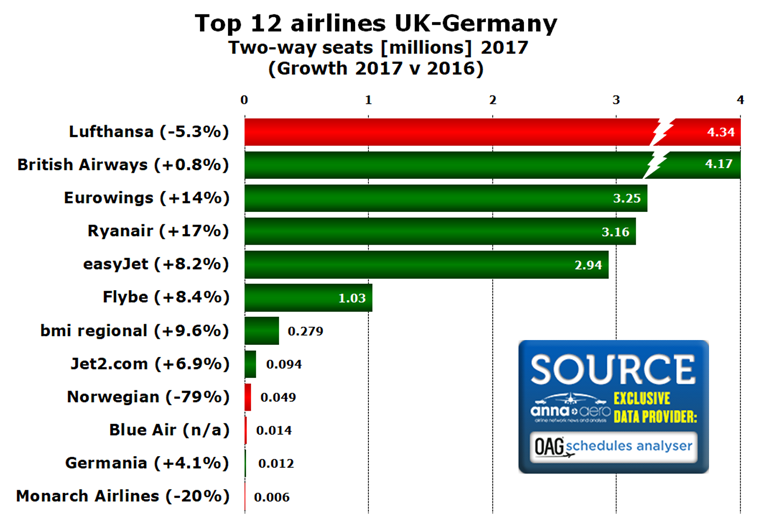 Eight of the top 12 carriers grew their capacity in the UK-Germany country pair in 2017. The largest year-on-year increases were introduced by budget carriers Ryanair (17% growth) and Eurowings (14%). The Irish ULCC added capacity to some existing routes but also introduced additional connections including links from its new Frankfurt base to Glasgow, Manchester and Stansted. Eurowings also added new routes including services from Munich to Edinburgh and Stansted. Four of the top-ranked carriers (highlighted in red) witnessed a drop in seat numbers, with the largest reduction coming from Norwegian. The Scandinavian LCC is one of several carriers that have left the market having ended services in this country pair in 2017, with Blue Air also terminating its short-lived link between Liverpool and Hamburg last year. Monarch Airlines will not return in 2018 after ceasing operations last October.

anna.aero’s New Routes Database records a further five new services that will launch in the UK-Germany market in 2018. Only one of these is scheduled to serve a main hub, with Lufthansa planning to launch a link from Frankfurt to Glasgow at the beginning of S18. The other routes include a Ryanair service between Edinburgh and Hamburg beginning 25 March, and seasonal, weekly Eurowings flights linking Berlin Tegel and Stuttgart to Newquay, and from Hamburg to Jersey. 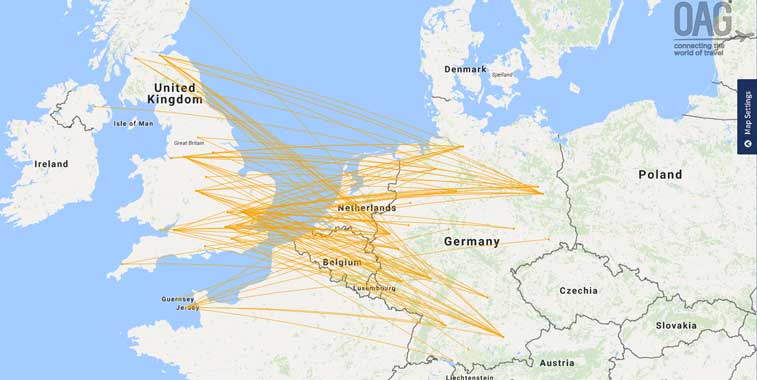 The route map for services between the UK and Germany in 2017 shows a concentration of links around the main hubs, but non-hubs actually provided 59% of the departing seats in this market. anna.aero’s New Routes Database shows that a number of niche point-to-point services will be served in S18 including weekly Eurowings links to Newquay from Stuttgart and Berlin Tegel.