Chinese carrier long-haul seat capacity up 233% between 2010 and 2017; anna.aero reveals top 40 global cities without a route to China 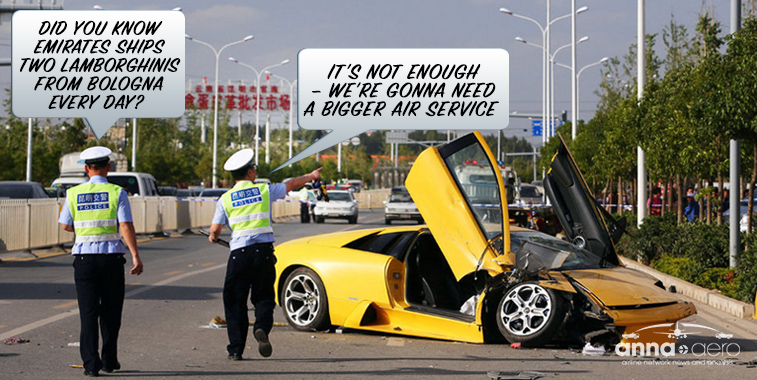 While Venice appears to be the leading unserved market in Europe without a direct link to China (118,000 indirect passengers in 2017), anna.aero feels that Bologna is a more viable option for a service (73,600). Given that it has more of a business-orientated market, and that it sits between Venice and Florence (85,700), Bologna’s catchment potential of indirect traffic to China sits roughly around 277,000 annual passengers (380 PDEW).

With Routes Asia just around the corner, taking place 18-20 March in Brisbane, many airports attending the event will be heading to the conference with a priority of meeting Chinese airlines, with hopes being to further strengthen their chances of gaining a direct link to China. With that in mind, this week anna.aero has decided to see what the short-term future has in store for Chinese carriers in terms of long-haul fleet developments. Not only this, but we have also analysed to see where these airlines could send this fresh wide-body capacity by revealing the top cities in the world that do not yet have that Chinese route, and could easily support a service. Before getting into the details of these cities, we have first looked at where Chinese airlines have placed their long-haul capacity since 2010, and how individual airlines have evolved. It should be noted that anna.aero has classed long-haul capacity as routes that are longer than 4,500 kilometres for this analysis. This investigation also excludes Taipei Taoyuan and Hong Kong due to their country classifications in OAG data. 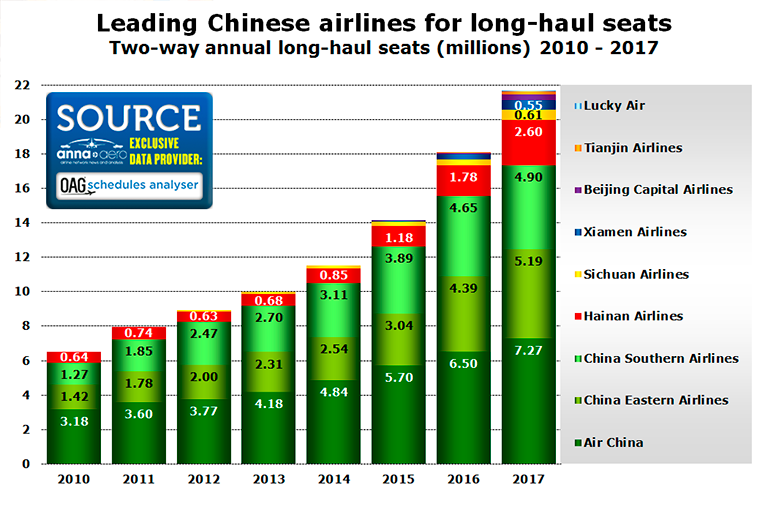 Since 2010, a number of Chinese airlines have entered the long-haul market, including Sichuan Airlines, Xiamen Airlines, Beijing Capital Airlines, Tianjin Airlines and Lucky Air. Of the four carriers in 2017 which also operated long-haul routes back in 2010, the fastest-growing of the original quartet is Hainan Airlines. Its seat offering on long-haul services from China in 2017 is now three times bigger than it was in 2010. What is impressive is that all four airlines have doubled the number of annual long-haul seats in the period analysed.

Beijing has remained the outright leading airport for Chinese airline long-haul seat capacity over the past eight years, with home-based carriers combined offering 8.16 million seats from China’s busiest airport last year. Despite the slot restrictions at the nation’s premier gateway, the number of long-haul seats offered by Chinese carriers from the capital managed to grow by close to 13% between 2016 and 2017. However, with slots becoming increasingly limited until the opening of the city’s new airport, this is a trend which is likely to slow down, as it has done over the past three years. The stalling in growth is backed up by the numbers – between 2015 and 2016, Beijing’s Chinese carrier long-haul capacity grew 16%, and by 21% in the 12 months before that. 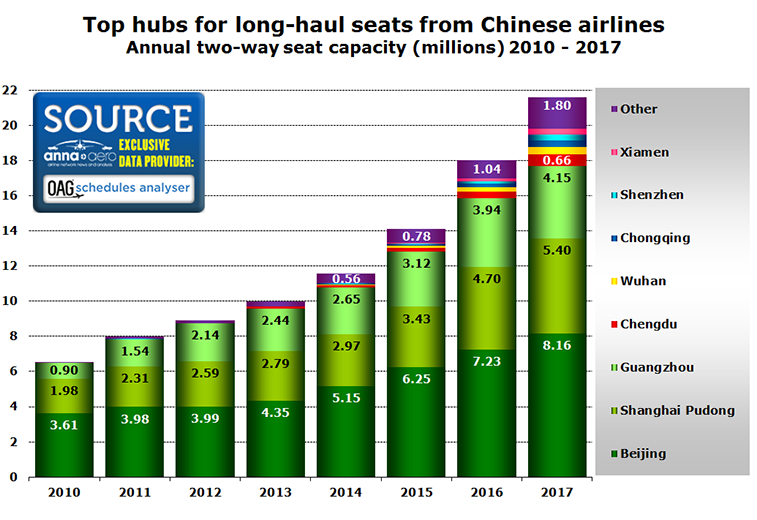 Some 22 cities in China supported long-haul services in 2017 with home-based airlines, with the growth of long-haul regional flying impacting on the market share of China’s leading airports. For example, in 2010 Beijing held a 55% share of long-haul capacity from home grown airlines. This is a figure which reduced to 38% in 2017. Therefore, while Beijing’s popularity in terms of seat growth has certainly been positive in recent years, the rise of secondary Chinese cities has impacted on the capital’s market performance.

Having established how airlines have grown in recent times, plus where they have placed capacity, it is now time to discover where they should be putting fresh capacity in the coming years. In this part of the investigation to determine leasing unserved cities, anna.aero has not included destinations with confirmed non-stop Chinese service starting this year, but do not yet have one, were also excluded, such as Atlanta (Delta Air Lines resuming flights to Shanghai Pudong in July).

The leading city in the world without a direct service to China presently is Sao Paulo, with an estimated 132,000 people travelling between the Brazilian city and China in 2017 (roughly 181 PDEW). Not too far behind Sao Paulo is Lagos in Africa, with close to 127,000 travellers choosing to venture between Nigeria’s largest port city and Asia’s biggest country last year. In Europe, the top unserved market is Venice (estimated 117,700 indirect passengers in 2017), with Amman the #1 unserved market in the Middle East (89,800) and Orlando the leading market for North America (71,400). Of the top 40 unserved long-haul markets from China last year, 13 are in Europe (highlighted in blue), 10 in North America (orange), eight in Africa (red), five in the Middle East (purple), with the remaining four being in South America (dark green). 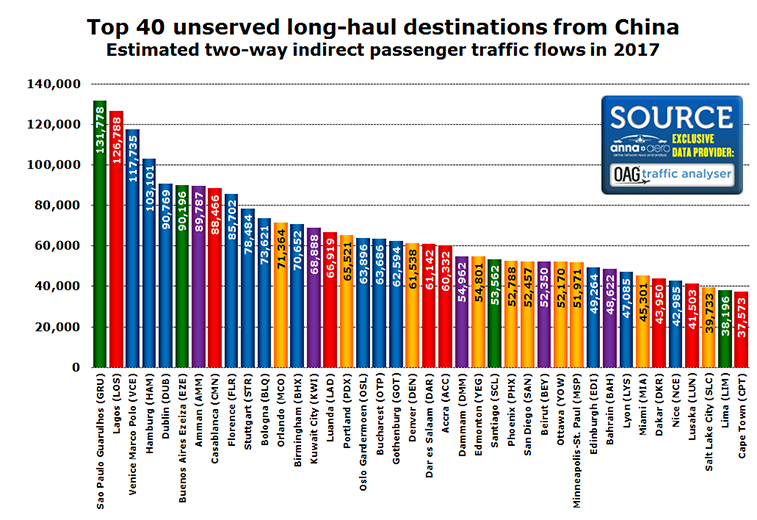 Airports around the world which just missed out on a place in the top 40 include Winnipeg (37,200), Panama City (36,000), Conakry (34,200), Tunis (32,000), Nadi (31,600) and Wellington (31,000). It should be pointed out that the latter two are currently the leading unserved markets in the South Pacific region for a direct Chinese service. One airport which unfortunately is not viable for a non-stop Chinese route is Florence (ninth biggest unserved market) due to its runway limitations, but this will be a great benefit to Bologna (11th) as it could easily attract some of this demand due to its proximity to the former destination (only 35 minutes on a high-speed train). Another benefit for Bologna is its closeness to Venice, meaning it is at the centre of a catchment of roughly 277,000 annual Chinese passengers, which could put its potential far above that of Sao Paulo. The Brazilian city is also a hard market to reach non-stop due to its distance from China, with the sector length from Sao Paulo to Shanghai for example being 18,553 kilometres. That is why it is currently served one-stop via Madrid on Air China.

Airlines to be targeting for that lucrative route

Now that anna.aero has confirmed which cities are high in the rankings for Chinese demand, now it is time to discover which airlines should be targeted in order to fill that demand with spare capacity. Here are some wide-body fleet developments for Chinese carriers over the next few years, with the information sourced from Airbus, Boeing and ch-aviation.

While these developments only include wide-body aircraft, a number of these airlines have orders for 737 MAXs and A321neos, with these aircraft types having the capabilities of serving routes over 4,500 kilometres. Given the top unserved long-haul destinations in the top 40, none of these are realistic markets for these aircraft, although some routes to the Middle East could be reached from destinations in West China. Overall, at least in the next five years, a further 120 wide-body aircraft should be joining various Chinese carriers, meaning capacity is there to be taken by potential future airports that have China right at the top of their network development wish list. 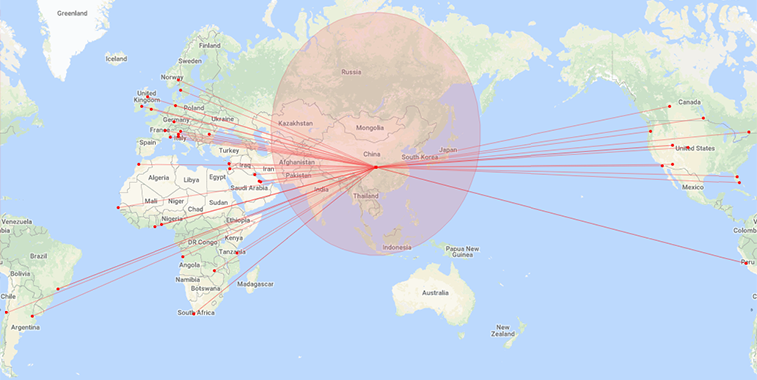 This map illustrated the top 40 unserved long-haul cities from China in 2017, with the large red circle highlighting the 4,500-kilometre range, a figure which anna.aero classifies as the point of a sector becoming a long-haul distance. With these being the top cities, it is just a question of which one will be the next to get that lucrative route to China. With Cape Town securing non-stop service to Hong Kong on Cathay Pacific Airways, this potential route may have moved in Chinese airlines’ thoughts. But with a number of prospective European airports in a cluster around Northern Italy, could one of them be next?