Dallas-Taipei is “Skyscanner Unserved Route of the Week” with 65,000 searches; China Airlines’ next US route? 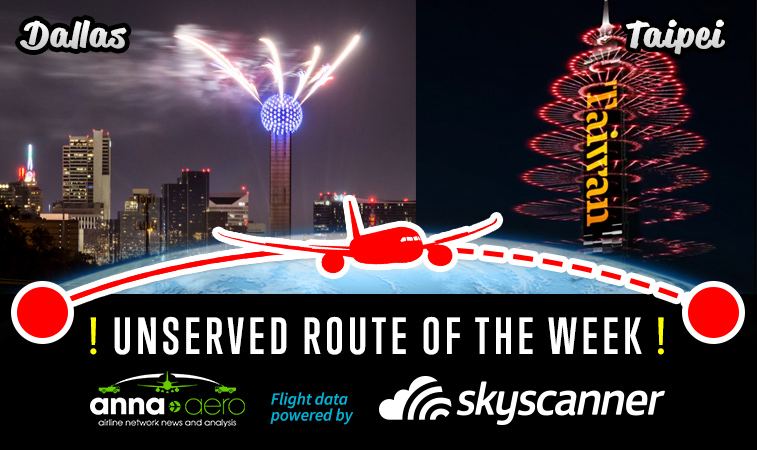 We are pretty sure that there would be fireworks at both ends of this potential route between Dallas and Taipei if a carrier like China Airlines or American Airlines decides to start a service in the near future. With Skyscanner’s search data now adding to the demographic and commercial links between the two cities, we are sure that either carrier could make a success of the currently unserved route.

With nearly 65,000 searches in the last year, a potential city pair from Dallas to Taipei has been identified as this week’s “Skyscanner-anna.aero Unserved Route of the Week” – a powerful analysis based on aspirational data captured from the Skyscanner.net flight comparison site used by +60 million unique visitors per month. “Geographically, Taoyuan is one of the best connecting locations for Southeast Asia traffic to the US, likewise, DFW is Asia’s best gateway to Mexico and Latin America,” informs Su Yang, Senior Airline Business Development Manager, Dallas/Fort Worth Airport. “21% of Southeast Asia to US passengers are connecting via Taoyuan.” 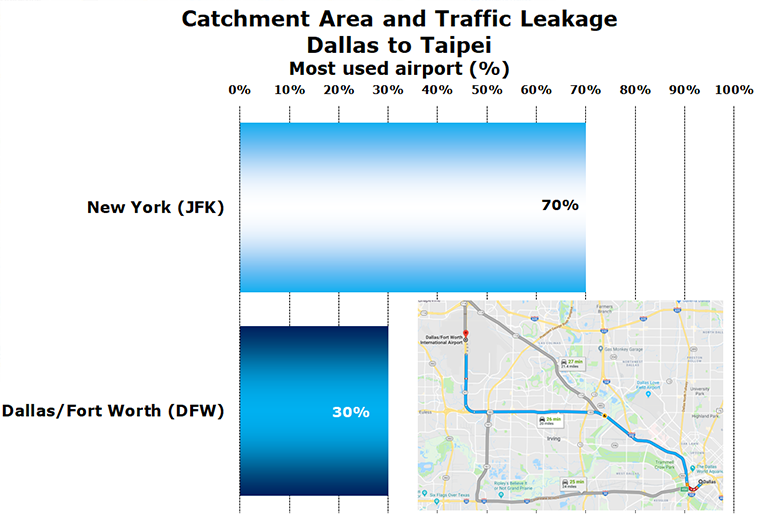 Matt Williamson Skyscanner’s Commercial Executive says: “Dallas serves 30% of the catchment (100 km around the airport) going to Taipei. With a better service, such as a non-stop operation, the traffic could grow by 237%.”

Skyscanner demand on this week’s unserved route shows a preference towards the Taipei end of the city pair, with a 61/39 split, so on this basis we looked at potential carriers at the Taiwanese origin first. Taipei is served by two airports, with Songshan predominantly a domestic facility (46% share of weekly seats), with regional departures to China (27%), Japan (23%) and South Korea (4%) taking up the residual capacity. On this basis, a route from Taipei’s primary intercontinental hub at Taoyuan has only been considered. According to OAG schedules for the week commencing 2 March, the largest carrier at Taoyuan is China Airlines (26% share of weekly seats). The airline’s route network from its home hub presently consists of four US destinations – namely Los Angeles (served double-daily), San Francisco (10), New York JFK (four) and Honolulu (two). Clearly the US market is at the forefront of the airline’s recent network development thinking, as Taoyuan’s #1 carrier is launching a daily 777-300 service from the airport to Ontario in California on 25 March. Bearing this in mind, a prospective sixth transpacific service to Dallas/Fort Worth (DFW) could be relatively high on China Airlines’ network growth agenda for S19 onwards.

Behind China Airlines at Taoyuan is its arch rival EVA Air (23% share of weekly seats). The #2 carrier presently offers nearly 125,000 weekly seats to a non-stop network of 45 destinations. EVA Air’s US route map has more depth than its nemesis, with six points served, including three duplicate sectors to Los Angeles (flown three times daily), San Francisco (18) and New York JFK (11), as well as operations to Houston Intercontinental, Seattle-Tacoma (both daily) and Chicago O’Hare. One potential stumbling block on a new link between DFW and Taoyuan is the lack of alliance synergies, which will provide valuable feeder traffic at both ends of the route. With China Airlines in SkyTeam, EVA Air in Star Alliance and American Airlines in oneworld, there does appear to be an alliance mismatch. That said, EVA Air flies into Seattle-Tacoma, which is a hub for the non-aligned Alaska Airlines and SkyTeam’s Delta Air Lines, so a service into DFW should not be ruled out on the grounds of this alliance issue.

Dallas is served by two airports, however with Love Field being a completely domestic facility, a route from the Texan city’s primary intercontinental hub at DFW has only been considered. Considering the US end of the route, DFW’s leading capacity provider of its current 23 serving airlines is American, which offers 86% of the airport’s weekly seats. The #1 carrier currently has a robust schedule to Northeast Asia, operating 42 weekly rotations to Tokyo Narita (14), Beijing, Hong Kong, Seoul Incheon and Shanghai (all daily). The oneworld airline is planning to have busy summer at DFW in terms of network development, with nine domestic routes in the offing, as well as a new European sector to Reykjavik/Keflavik, which begins in June. With all this extra domestic feed coming into what is already American’s biggest operation (nearly 650,000 weekly seats versus its #2 airport Charlotte Douglas’ 490,000 seats), the airport needs fresh long-haul connections to help the hub to continue its development. Perhaps with this compelling Skyscanner data, Taipei will become the next Asian spoke in DFW’s hub. 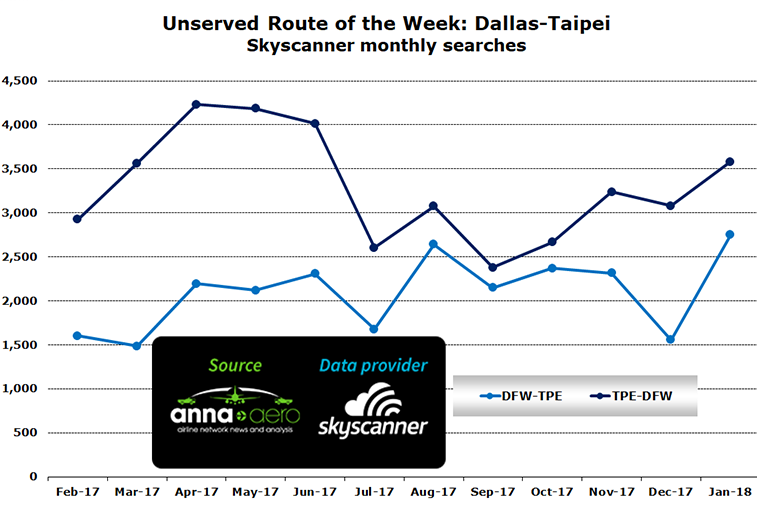 When looking at the previous year of search data (graph above), the busiest month (from Dallas) is January 2018, with 2,750 searches, while the quietest month was March 2017 (1,500 searches). Given the anticipated booking profile of the route – long-haul business – just over 50% of travellers on this potential sector will want to book between seven to four months before departure, so this would seem to indicate that the busiest months for traffic will be between May and August, but contradicting that is the over-lapping seasonal low being between July and October. Using the same methodology for the Taipei end of the sector, the peak months for traffic will be between August and November, with the low months being between January and April. “There are 42 Texas-based companies with 102 subsidiaries in Taiwan,” informs Yang. “On the flip side, there are 25 Taiwanese companies with 44 subsidiaries in Texas.”

According to OAG Traffic Analyser, because there is no direct service, the top three connecting options chosen by those passengers who did book travel between Dallas and Taipei in the last 12 months (year ending January 2018) indicates that the majority of connecting travellers used San Francisco (25%), Hong Kong (20%) and Narita (19.7%). A total of 19 different airports were used as a transfer point between the two cities during the period analysed.

Indeed, an O&D market that is not served by a non-stop flight will typically display a low purchase rate and low traffic. In this instance Skyscanner’s Travel Insight indicates a monthly average purchase rate of 7.2% for the Dallas to Taipei route (see graph below). Therefore, if there was a Dallas to Taipei route, and if bookings performed in line with the “Skyscanner market average” for direct services at both airports (11%), the airline operating this route could immediately expect an improved purchase rate of 53%, without any increased marketing spend. However, with nearly 65,000 annual searches in the last year, and with the sector being operated by an appropriately-sized aircraft for the type of route, a three or four times weekly service should be immediately viable for the airline choosing to start this potential city pair.

“27% of Taipei/Hong Kong/Southeast Asia to US traffic originates or terminates in the DFW catchment area, yet despite this fact, there is only 11% of Taipei/Hong Kong/Southeast Asia capacity allocated to our catchment. DFW has full potential to gain additional capacity to the region, supported by the fast-growing Asian population, strong DFW economic growth and ties with Asia,” concludes Yang. 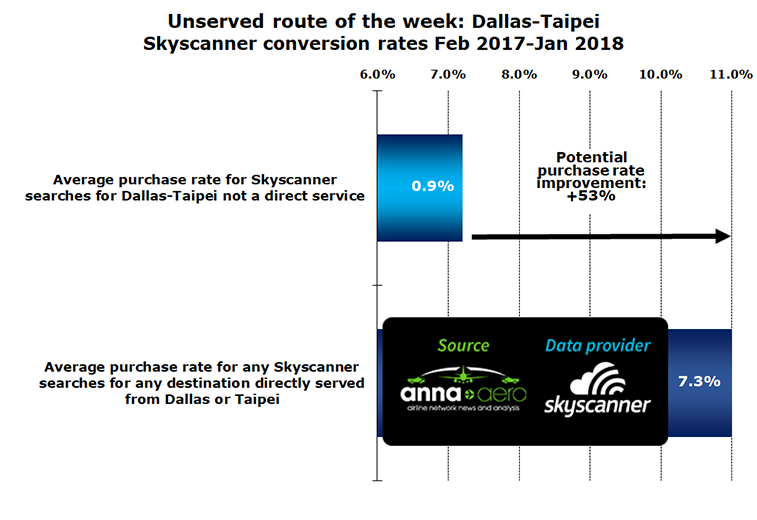