Turkish market grows 11% in 2017, bouncing above the records of 2015; Istanbul accounts for 50% of traffic; Antalya leads net passenger growth 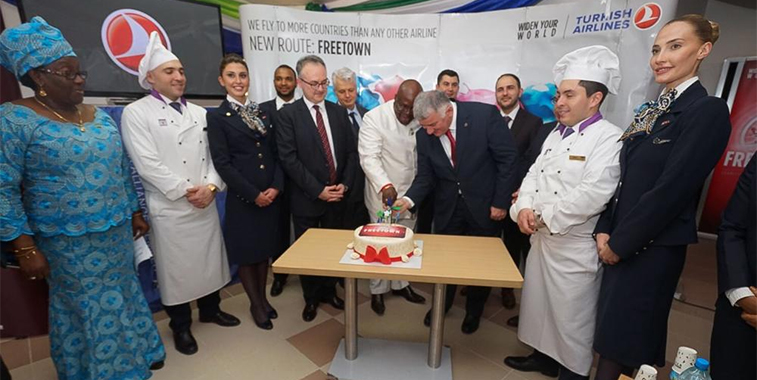 Turkish Airlines launched flights to Freetown on 24 February from Istanbul Atatürk. The latter airport processed just under 63.73 million passengers in 2017, a rise of 6.0% versus 2016. Atatürk, along with Istanbul Sabiha Gökçen, were responsible for handling just under 50% of all Turkish passengers last year, with the city’s market share rising from 42% in 2010. While their combined market share only rose by 7.4 percentage points during this period, the traffic passing through the two airports increased by 120%, from 43.28 million in 2010 to 95.11 million last year.

Turkey is a favourite among anna.aero’s number crunchers, not only because of its luscious beaches and dynamic culture (one of our data elves has been there six times), but also because of how phenomenally fast the market has grown in recent times. Between 2000 and 2017 the market has developed by a whopping 450%, rising from 34.97 million passengers in 2000 to over 190 million last year. To put the growth of Turkey’s aviation scene into perspective, the nation now welcomes more passengers in the Q1 period of a year (35.42 million passengers in Q1 2017) than it did in the whole of 2000. This is a trend which appears to be continuing in 2018. In January, Turkey’s leading airports processed 14.74 million passengers, up by nearly 29% versus the 11.47 million they handled in January 2017. If this rate of growth is maintained throughout this year, Turkey could expect to handle well over 230 million passengers in 2018, although this target is ambitious. Along with this growth aspiration, Turkey will see the opening of a brand new airport in October in Istanbul which is still on target for completion according to Yusuf Akçayoğlu, CEO of İGA Airports Construction, who recently sat down with anna.aero Publisher Paul Hogan.

Last year, Turkey’s leading airports processed 192.34 million passengers, a record year for the market and an increase of close to 11% versus 2016. This growth rate translates to a net increase of 18.60 million passengers in 2017. While 2016 was indeed a difficult one for the Turkish market due to uncertainty caused by external factors, it has been brought back on track over the past 12 months, with the number of passengers processed last year being 6.2% above the levels experienced in 2015. 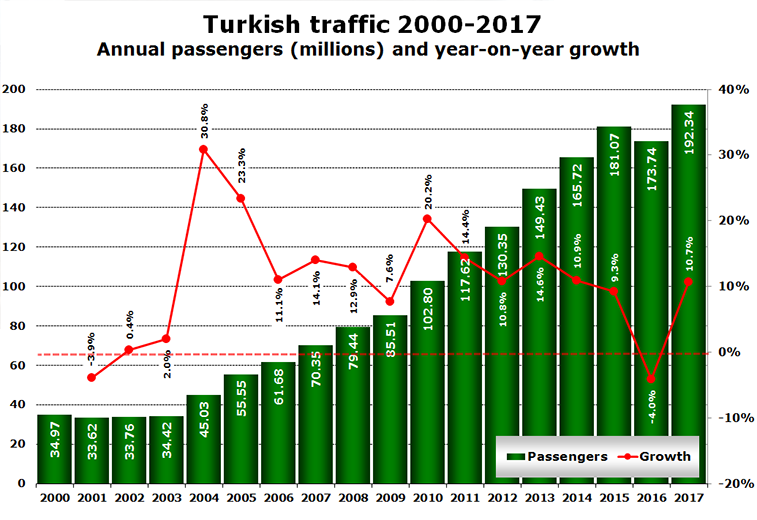 The Turkish market has only witnessed two years of traffic decline since the turn of the millennium, with passenger numbers falling 3.9% between 2000 and 2001, and by 4.0% in 2016. Despite the drop in traffic in 2016, the fall was as a result of declining numbers in the international market. Between 2015 and 2016, international passengers fell by over 15% from 84.03 million to 71.24 million, the lowest result for international passengers since 2013 (73.28 million). By comparison, domestic traffic rose during this 12-month period by 5.6%, from 97.04 million to 102.50 million. This was also the point which saw domestic passenger traffic pass the 100 million passenger barrier for the very first time.

It would appear that the growth of the Turkish market is well-rounded among all airports, evidenced by how Istanbul’s market share (including Atatürk and Sabiha Gökçen) has gone from 42% in 2010 to just under 50% last year. While the city’s market share grew by 7.4 percentage points, the traffic passing through Istanbul’s two airports increased by 120%, from 43.28 million in 2010 to 95.11 million last year. With this, it does appear that traffic is growing evenly throughout Turkey. 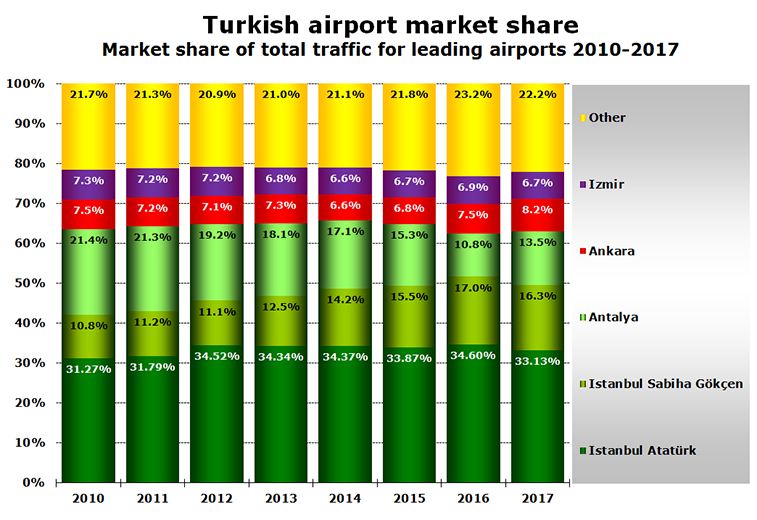 One airport which is certainly experiencing the resurgence of last year is Antalya, a market heavily reliant on leisure traffic. Its traffic grew by over 38% in 2017 to 25.93 million. This comes off the back of 2016 where traffic fell 32% from a total of 27.72 million in 2015. The return to normality at Antalya has meant that its market share grew by 2.7 percentage points last year, however its total market share of between 13%-14% is still down from the 21% it achieved in 2010 and 2011. Of Turkey’s leading airports, the only one to post a record market share in 2017 was Ankara, with its share of 8.2% being a 0.7 percentage point improvement on its achievement of commanding 7.5% of the Turkish market in 2016 and 2010.

With it handling 7.19 million additional passengers in 2017, Antalya was, not surprisingly, Turkey’s leading airport for net traffic growth last year, with it being followed by Atatürk (3.61 million), Ankara (2.80 million), Sabiha Gökçen (1.81 million) and Izmir (0.87 million). Overall there were 38 airports in Turkey last year which reported a rise in traffic figures, with the top 20 for net growth being displayed in the graph below. What is clearly evident from the graph is that the leading airports were the driver for Turkey’s return to record-breaking levels of passengers. 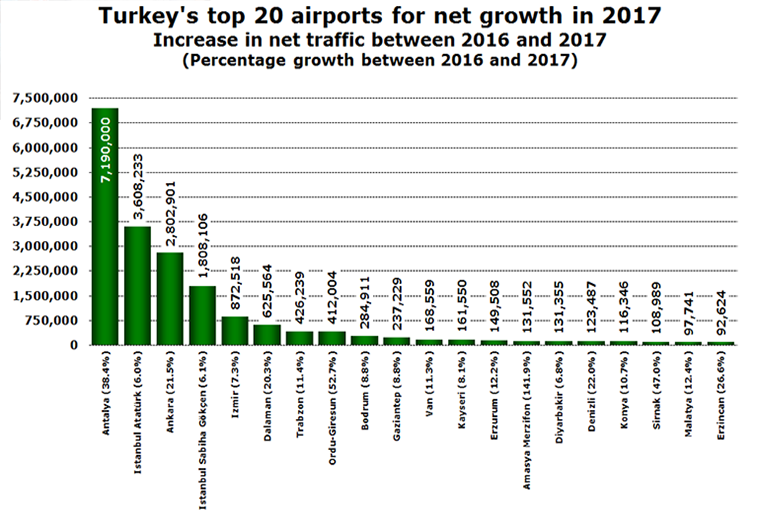 In terms of overall growth, the best airport in Turkey last year was Amasya Merzifon (14th for net growth in 2017), an airport situated in north-central Turkey and serving a town with a population of 70,000 people. Last year it handled 224,256 passengers, up 142% versus the 92,704 passengers it greeted in 2016. The reason for this growth is due to the airport not having scheduled flights during the summer of S16 according to OAG schedules. Second to Amasya Merzifon for percentage growth was Ordu-Giresun (eighth for net growth in 2017). The latter airport saw 412,004 additional passengers in 2017, a 53% increase versus 2016’s traffic level.

Given its flag carrier status, and its drive to be one of the world’s leading hub airlines, it is of no surprise to see Turkish Airlines as being the nation’s largest carrier. Based on OAG schedules, the airline reported 60.75 million departing seats from Turkey in 2017, up 3.6% over 2016. Pegasus Airlines, which is roughly 42% the size of Turkey’s leading carrier, is the nation’s second biggest airline. However it reported a 5.9% rise in departing seats. 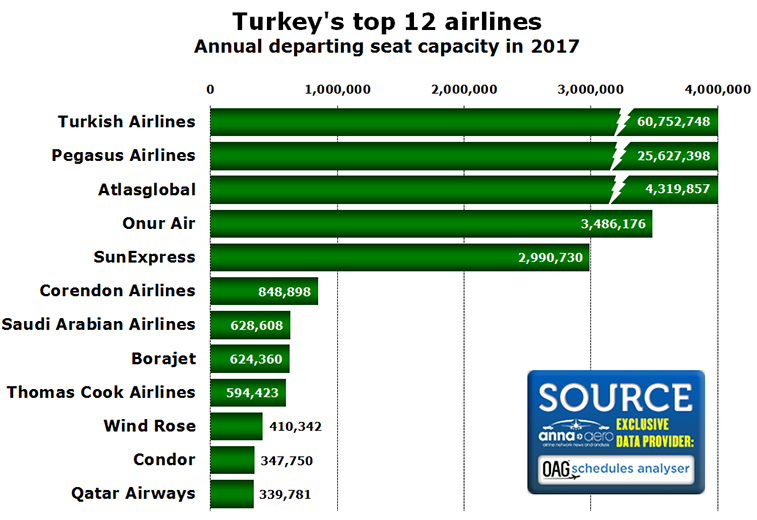 A new carrier to the top 12 for 2017 is Qatar Airways, with the MEB3 member increasing its seat capacity to Turkey by 0.7% last year. While this is not the greatest level of growth, the carrier’s figure is likely to be more substantial in 2018, given in part to Qatar Airways’ decision to launch flights to Adana last November. Another factor which has allowed the oneworld member to climb into the top 12 is due to Lufthansa, now Turkey’s 14th largest airline (12th in 2016), posting a 2.4% cut in departing seats last year. Another carrier which has slipped in the rankings is Onur Air, with the Turkish carrier dropping from third to fourth between 2016 and 2017, a result of a 19% cut in capacity. This has allowed Atlasglobal to overtake it to become Turkey’s third biggest airline, having reported a 19% growth in seats last year. 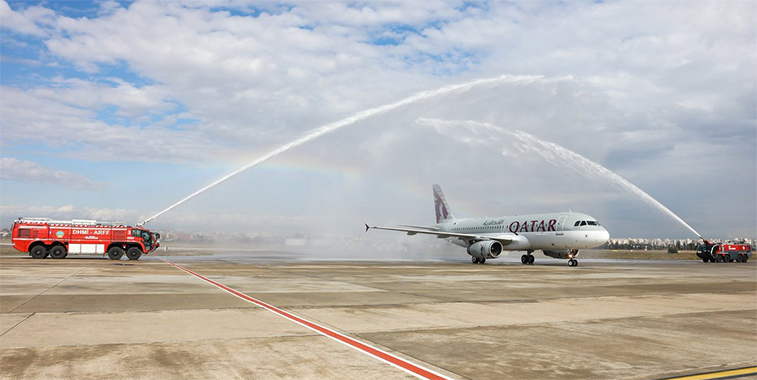 Qatar Airways commenced flights to Adana in November, with the Turkish airport greeting its arrival with a water arch salute. Qatar Airways is Turkey’s 12th largest airline, with it increasing its seat offering to Turkey by 0.7% last year, a figure that is likely to increase in 2018 thanks in part to the addition of Adana to its destination map. Adana is Turkey’s sixth largest airport, handling 5.61 million passengers in 2017. While it is one of the nation’s biggest facilities, its traffic only increased by 0.3% last year, meaning it does not rank among the top 20 airports for net growth.