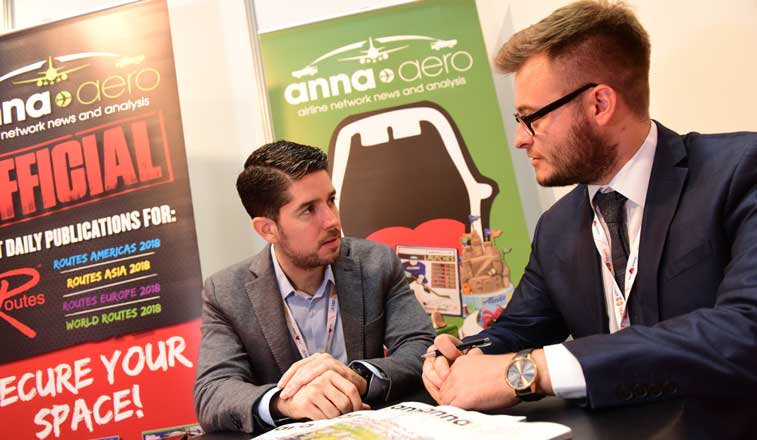 VivaAerobus increased it passenger numbers by 28% in 2017. The Mexican LCC, which launched in 2006, more than doubled its traffic from 2013 to 2017. The carrier’s CEO, Juan Carlos Zuazua Cosío, met with anna.aero’s Assitant Editor Jonathan Ford at World Routes in Bareclona last year, where he explained that the airline has the lowest cost base among its competitors and expects its strong growth to continue for the next few years.

VivaAerobus only began operations in 2006 but it is now the fourth largest Mexican airline based on departing scheduled seats in 2017, if Aeromexico and Aeromexico Connect are considered as one entity. Following the same approach, VivaAerobus was the fourth largest provider of domestic seats in its home market, and the fifth biggest operator when it comes to international capacity. According to ch-aviation, the Mexican LCC currently operates a fleet of 23 A320 family aircraft, including two A320neos. The airline also has a further 25 aircraft on order.

Big boost in passenger numbers since 2015

There are some differences between the available data when it comes to identifying passenger figures for VivaAerobus over the past few years. The airline’s Q4 report for 2017 suggests that it carried 6.4 million customers in 2016 and 8.2 million in 2017. However, traffic statistics from the carrier itself were only available going back several years, so this analysis was obliged to use data from Mexico’s Directorate General of Civil Aeronautics (Direccion General de Aeronáutica Civil, DGAC) to provide a longer-term, uniform trend. The DGAC statistics record the carrier’s combined 2017 scheduled and non-scheduled traffic at 7.74 million passengers. One trend is clear regardless of the data source, VivaAerobus experienced strong growth last year. The DGAC figures show that the airline increased its passenger numbers by 28% from 2016 to 2017. Over the past 10 years the LCC has consistently witnessed year-on-year increases in passenger numbers. From 2013 to 2017, the Mexican carrier more than doubled its traffic, going from 3.79 million to 7.74 million. 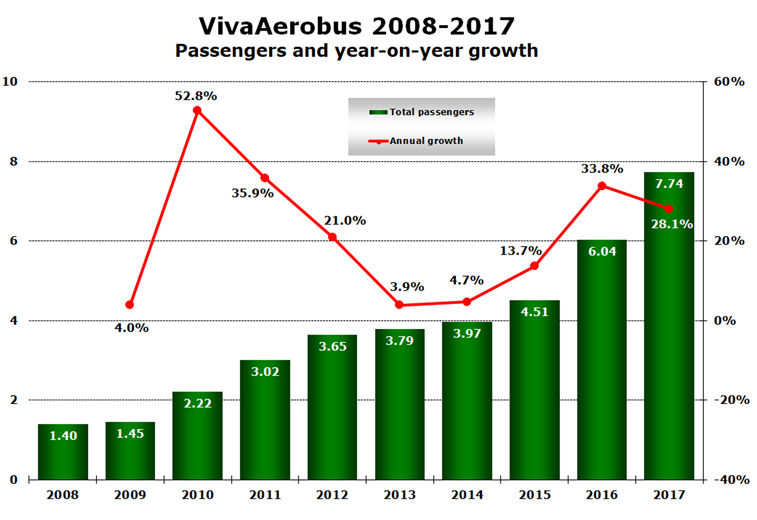 Domestic flights dominate the VivaAerobus schedules. In 2008 domestic passengers accounted for 96% of the airline’s traffic and this had increased to 99% by 2017. From 2008 to 2017 domestic passenger numbers grew from 1.3 million to 7.7 million, representing an increase of 474%. Over the same period international traffic grew from 63,000 to 86,000 passengers, an increase of 37%. International passengers rose as high as 150,000 in 2015 before falling back to last year’s figure. This was due to increases and then cuts on services to the US.

The top 12 airports in the VivaAerobus network are all domestic. Mexico City and Monterrey are its largest hubs based on last year’s capacity data. Between them the two airports accounted for 40% of the airline’s departing seats in 2017. During the week commencing 6 March the LCC will operate 220 flights from Mexico City and 170 from Monterrey, equivalent to about 31 and 24 daily departures respectively. Monterrey was the airline’s largest departure point for international services followed by Guadalajara. The highest ranking non-Mexican airport in the VivaAerobus route network in 2017 was Houston Intercontinental, which saw 34,000 departing seats on services to the airline’s home market. 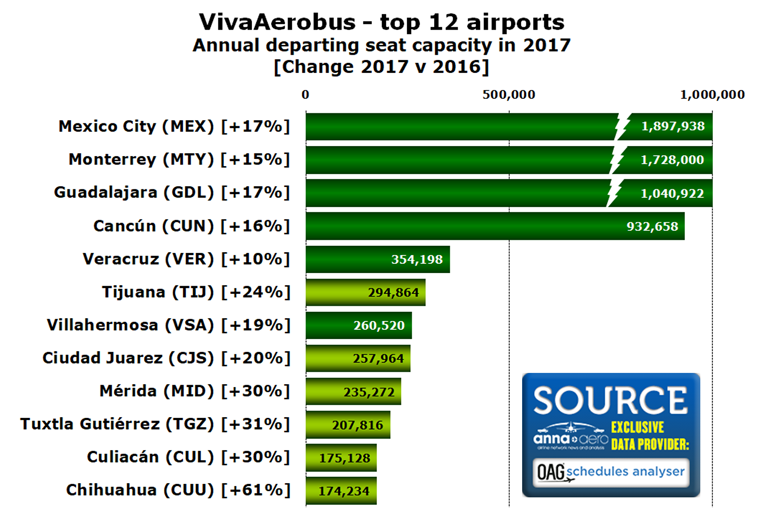 All of the top 12 airports experienced strong percentage growth in departing seats from VivaAerobus last year, with six facilities (highlighted in light green) witnessing a capacity increase of 20% or more. The largest single increase came at Chihuahua, where seat numbers rose by 61% as a result of additional capacity on existing links to Guadalajara, Mexico City and Monterrey.  The Guadalajara and Mexico City connections only started operating mid-way through 2016 so the increase in capacity on those services was due to 2017 being the first full year of operation from Chihuahua.

It is unsurprising that all of the top 12 routes flown by VivaAerobus last year were domestic, given the dominance of internal services in the airline’s network. The LCC’s largest route linked its two biggest hubs with more than 360,000 one-way seats available from Mexico City to Monterrey in 2017. OAG schedules indicate that VivaAerobus will provide up to 42 flights on this airport pair during the week commencing 6 March, an average of six daily services. The majority of the airline’s top-ranked routes experienced an increase in capacity in 2017, with the strongest growth occurring on the Tijuana-Guadalajara link. This airport pair saw a 40% jump in seat numbers from 2016 to 2017. Only one of the top 12 routes (highlighted in red) experienced a reduction in capacity last year, with seat numbers on the Mexico City-Tijuana connection falling by 11%. 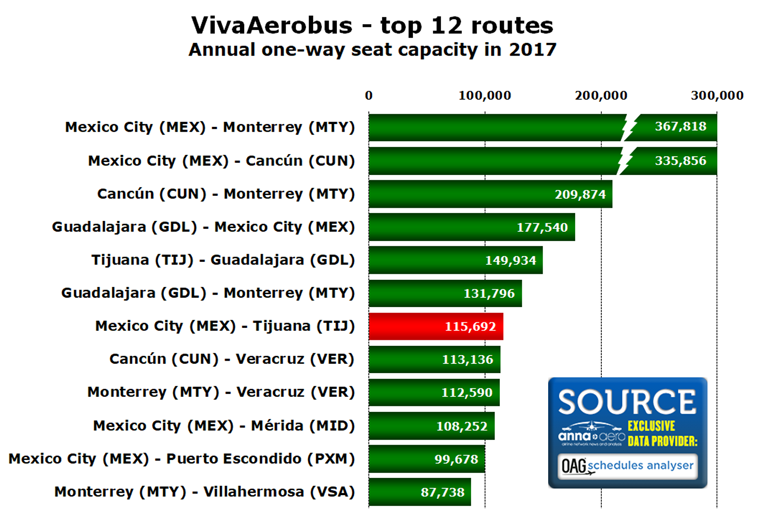 The US was the only international market served by VivaAerobus last year. Capacity on services to Mexico’s near neighbour increased by 12% from 2016 to 2017. The US link with the most capacity in 2017 was the airline’s route from Monterrey to Houston Intercontinental, which supported nearly 30,000 one-way seats, despite witnessing an 11% cut compared to 2016. Several new US connections were introduced in late 2017 including links from Guadalajara to Los Angeles and from Mexico City to Las Vegas. The carrier is currently operating daily flights on both new sectors. 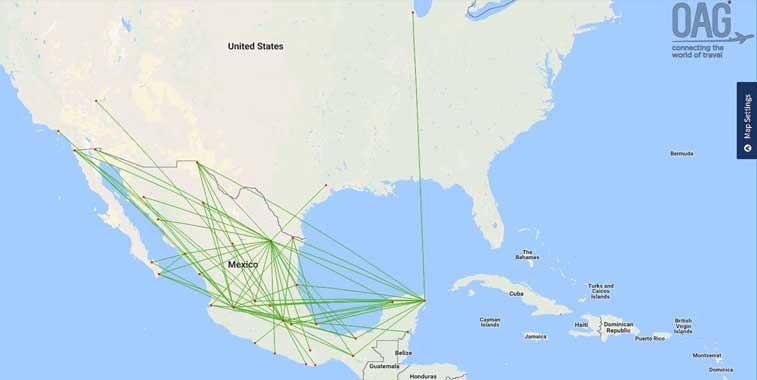 The VivaAerobus route map emphasises the carrier’s focus on domestic links. In 2017 it offered nearly nine million two-way seats on domestic links, which accounted for 99% of its total capacity. International seats rose as high as 260,000 in 2015 but this has since declined.