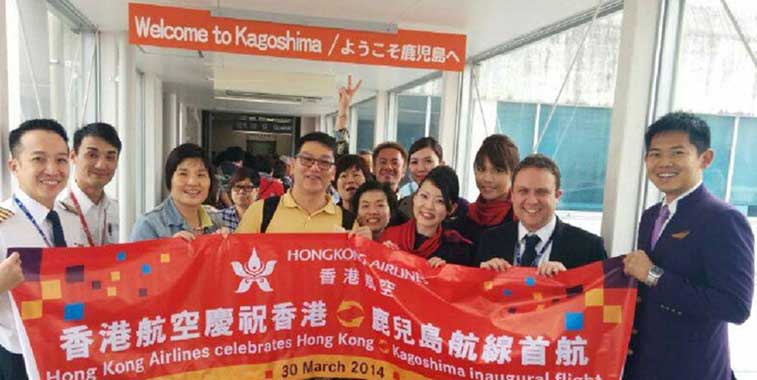 Kagoshima Airport saw capacity grow by 4.1% in 2017 with seat numbers rebounding last year following a marginal reduction in 2016. The airport increased its available departing seats by 29% from 2008 to 2017, with about 4.2 million available last year. Kagoshima’s largest international route is to Hong Kong. The airport welcomed the launch of services on this sector by Hong Kong Airlines back in March 2014. HK Express also began serving this route in 2016.

Kagoshima Airport was the ninth largest in Japan in 2017, based on departing seat capacity. It was the ninth biggest departure point for domestic services, but only the 15th largest for international seats. The airport is located on Kyushu, Japan’s third largest Island, which has been in the news recently due to volcanic eruptions.

Seat numbers bounce back in 2017

The departing seats available from Kagoshima grew from about 3.3 million in 2008, to 4.2 million in 2017, representing an increase of 29%. However, the path to progress has been far from smooth, with the airport experiencing three consecutive years of capacity cuts from 2010 to 2012. This period saw seats numbers drop from 3.49 million in 2009 to 2.47 million in 2012, a reduction of 29%. The single biggest cut in seats came in 2011, with capacity down by 23% compared to the previous year. Japan Airlines (JAL) was the biggest contributor to this reduction in capacity. In 2010, the combined capacity on offer from JAL and JAL Express was in excess of 1.3 million departing seats. In 2011 this had fallen to 541,000 seats, representing a reduction of 58%. It is worth noting that 2011 was the year in which Japan suffered a major earthquake followed by a tsunami, external factors which may have reduced domestic demand and influenced some of the carrier’s cuts, alongside other potential strategic factors. In 2012 there was a further, smaller reduction in departing seats from Kagoshima. The airport bounced back in 2013 with capacity increasing by more than one-quarter, a year in which All Nippon Airways (ANA) witnessed strong growth from the facility. Two further years of robust growth were followed by a dip in 2016, before the capacity trend became positive once again in 2017 with a 4.1% rise. 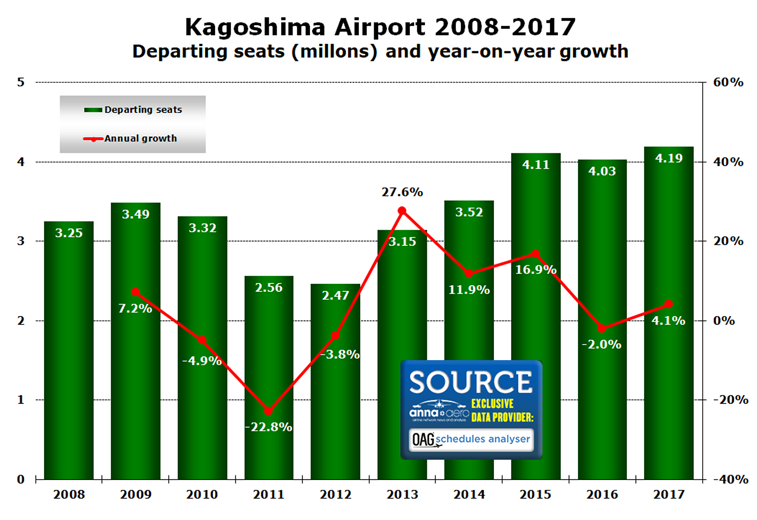 The vast majority of seats available from Kagoshima are operated on domestic services. In 2017, 96% of the airport’s capacity served other Japanese destinations, down from 98% in 2008. However, in the past few years, international seats have seen stronger percentage growth, albeit from a smaller base. In 2008 Kagoshima offered 3.2 million seats on departing domestic flights and by 2017 it was providing 4.0 million on internal services, representing an increase of 26%. In contrast international capacity increased from just 59,000 seats in 2008 to 181,000 in 2017, a growth rate of 208%.

Indigenous airlines topped the table for departing capacity from Kagoshima last year, with ANA leading the way with just over one million seats on offer. It was closely followed by national flag carrier JAL, with Japan Air Commuter (an affiliate of JAL, but with a separate IATA code) coming in third. These three airlines accounted for two-thirds of Kagoshima’s departing seats in 2017. In fact, the top seven airlines, and eight of the top 12 serving the airport, were Japanese. The remainder included two carriers from Hong Kong, one from China and one from South Korea. Five of Kagoshima’s top 12 airlines (Solaseed Air, Skymark Airlines, Jetstar Japan, Peach Aviation and HK Express) can be classified as LCCs. 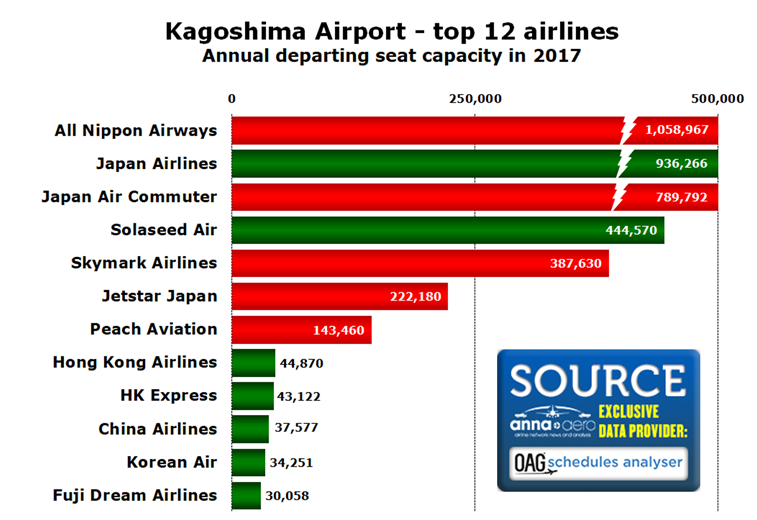 Seven of the top 12 airlines at Kagoshima offered additional capacity from the airport in 2017 compared to the previous year. The largest seat increases came from LCCs HK Express (148% growth) and Solaseed Air (38%). HK Express was a new entrant to the top airline table, having only started serving Kagoshima in July 2016, so its large percentage growth can be explained by the fact that 2017 was its first full year of operation on the route. Solaseed Air added capacity on its domestic links to Tokyo Haneda and Okinawa. Five of the top 12 airlines (highlighted in red) cut the number of departing seats on offer from Kagoshima in 2017. These cuts were mostly marginal, with the largest applied by ANA, which reduced seat numbers by 5.0%, while Peach saw a 3.7% drop in capacity.

The 11 largest routes from Kagoshima in 2017 were domestic links. Tokyo and Osaka are the biggest city destinations, with flights on offer to two airports in each metropolis. In total there were 1.9 million seats available on services to the Japanese capital in 2017, which represented 45% of Kagoshima’s total departing capacity. Haneda was the top destination airport, accounting for 43% of the departing capacity. OAG schedules show that four airlines will operate 161 flights from Kagoshima to Haneda during the week commencing 13 March. JAL offers eight daily flights while ANA, Solaseed Air and Skymark will operate six, five and four daily rotations respectively. Nine of the top 12 destinations experienced a year-on-year capacity increase in 2017. The strongest growth came on services to Hong Kong (58% increase), the only international link to feature amongst the top-ranked routes. This was down to a combination of Hong Kong Airlines adding extra seats and HK Express operating the route for a full year for the first time. Three of the top 12 links (highlighted in red) witnessed cuts in capacity in 2017. These were marginal reductions with Osaka Kansai suffering the biggest decline with a 3.7% drop in seats. 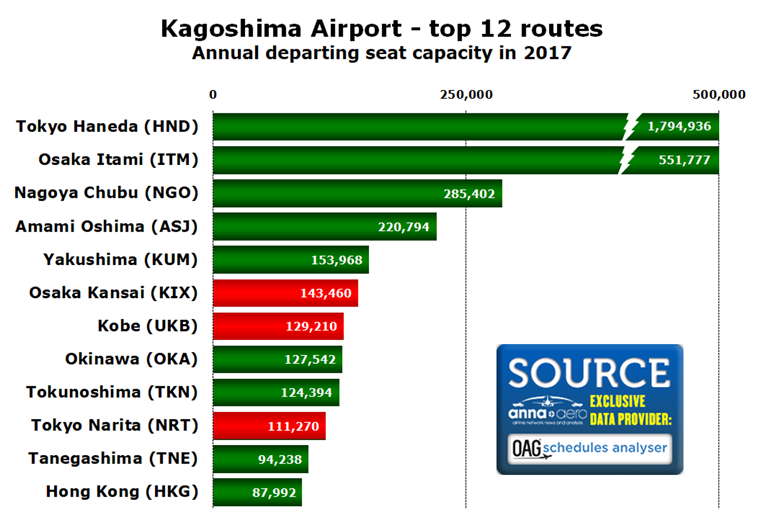 Four international markets were served from Kagoshima in 2017. Hong Kong was the largest followed by South Korea, Taiwan and China. Only four international airports saw regular services to and from Kagoshima last year. These were in descending capacity order: Hong Kong, Seoul Incheon, Taipei Taoyuan and Shanghai Pudong. Only the latter witnessed a year-on-year capacity contraction when compared to 2016 levels.

According to anna.aero’s New Routes Database, one new service has already been introduced at Kagoshima in 2018, with South Korean carrier Jeju Air introducing flights from Seoul Incheon. The LCC became the third operator to serve the airport pair, joining incumbents Korean Air and Eastar Jet on the route from 6 January. 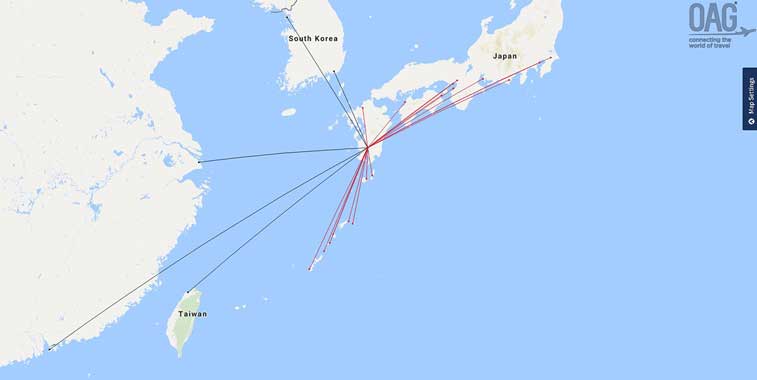 Kagoshima Airport’s departure board is dominated by domestic destinations. About 96% of the departing capacity in 2017 was operated on domestic services. The airport’s route map for 2017 demonstrates the concentration of internal Japanese sectors (highlighted in red). Only four international destinations saw regular flights throughout the year: Hong Kong, Seoul Incheon, Taipei Taoyuan and Shanghai Pudong. Busan is also on the map, but it was only served during October.