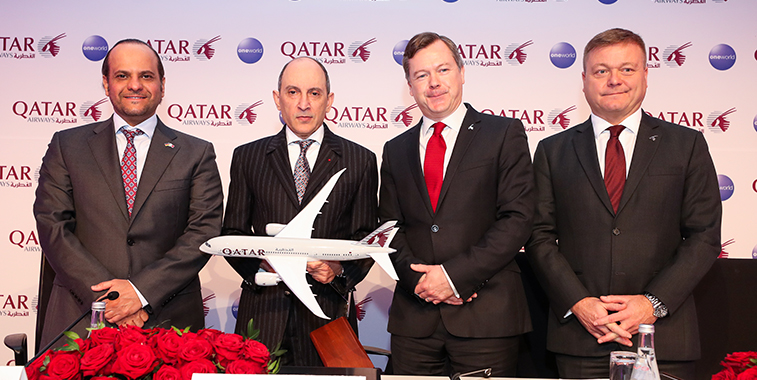 Qatar Airways held a press conference at ITB in Berlin on 7 March where it confirmed that it will return to London Gatwick on 22 May with a twice-daily service from Doha. Those that took part in the press briefing were: Sheikh Saoud Bin Abdulrahman Al Thani, Ambassador of the State of Qatar in Germany; Akbar Al Baker, Group CEO, Qatar Airways; Jonathan Harding, SVP Europe, Qatar Airways; and Frédéric Gossot, Country Manager for Germany, Austria & Switzerland, Qatar Airways. The news means that for S18 Qatar Airways will serve six UK destinations.

Qatar Airways has confirmed that on 22 May it will return to London Gatwick with a route from Doha, ending a seven-year hiatus on the 5,208-kilometre sector. Last time around, the MEB3 member operated the route daily using A330-200s, with the service departing Doha at 07:35, landing into Gatwick at 13:00. Return services then left London’s second-busiest hub at 14:35, arriving back in Qatar at 23:20.

This time, the oneworld member will offer a twice-daily 787-8-operated service, with the carrier providing 02:25 and 09:00 departures from Doha, with these flights landing into Gatwick at 07:25 and 14:00 respectively. Return services will then leave at 09:00 and 15:30 from Gatwick, getting back into Doha at 17:40 and 00:10 (+1 day). On top of this, between 15 June and 29 September, a third daily rotation will be added from Gatwick on Fridays and Saturdays. The third-daily operation will leave Doha at 15:40, arriving into Gatwick at 20:00. The evening flight will then depart the UK at 21:30, landing at Hamad International Airport at 06:10 (+1 day). With this new service from Gatwick, it means that Qatar Airways will be offering eight daily departures from the UK capital this summer (nine on Fridays and Saturdays), with the new route complementing the MEB3 carrier’s existing six times daily operation at London Heathrow.

Despite Qatar Airways planning to offer three additional daily flights into the UK this summer, its seat capacity will still be 132% smaller than that being offered by MEB3 rival Emirates. The latter is scheduled to offer 6.22 million UK seats in 2018 from Dubai, thanks in part to its new daily 777-300-operated service to London Stansted starting in June, its third UK capital airport. However, while its operation is smaller than its Dubai-based rival, Qatar Airways’ seat capacity from the UK is now expected to grow by 9.8% this year thanks to its new Gatwick service, while Emirates’ will grow by just 2.2%, even including the Stansted operation. The result means Qatar Airways will grow over four times faster than Emirates in the UK this year. 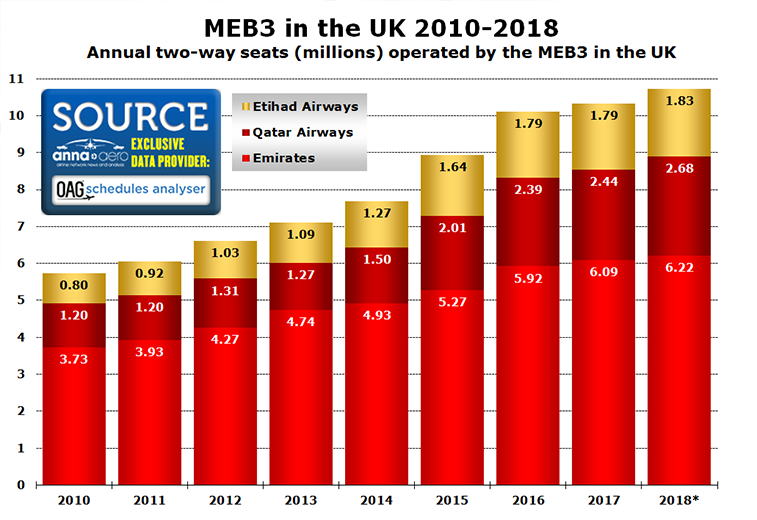 Bangkok, Colombo and Perth likely to be popular

In terms of Gatwick demand, based again on MIDT data, 57,900 passengers travelled between the UK capital airport and Bangkok in 2017, with 37,400 flying to/from Colombo and 25,570 going to/from Perth. Given that it operates three daily A380s into Gatwick from Dubai, it is of course no surprise to see that Emirates is the lead airline for connecting traffic, with its having a 73% share of Bangkok passengers, 90% share of Colombo and 93% share of Perth. Second to Emirates on the Bangkok route is Cathay Pacific Airways (7.4% share), and it is also second on the route to Perth (5.6%). Interestingly one carrier which will feel an impact from this new Qatar Airways route is Ukraine International Airlines, as it currently has a 6.4% share of Bangkok traffic, and it is the third most popular airline on the link to Colombo, having a 4.7% share. The second leading carrier on the Colombo route is Turkish Airlines, with the Star Alliance member capturing 5.0% of the Sri Lankan market from Gatwick in 2017. 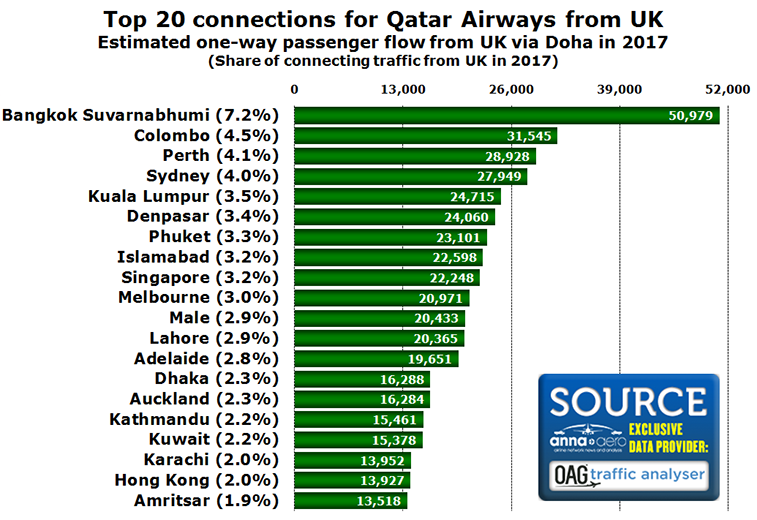 With Qatar Airways now planning to serve six UK airports this summer, it is still flying to one less destination than Emirates, with the latter being present at Heathrow, Gatwick, Stansted, Manchester, Birmingham, Glasgow and Newcastle. Etihad Airways still appears to be comfortable with three UK airports, namely Heathrow, Manchester and Edinburgh. So with expansion high on the agenda for Qatar Airways, where could it go next in the UK? Given that Stansted is the busiest UK airport without a Qatar Airways operation, it may have been a possibility which has been clouded by Emirates’ decision to serve the London airport this year. Bristol would also have been a likely contender, as it is the busiest UK airport outside of the capital without an MEB3 service. However its proximity to Cardiff may delay its network development opportunities. 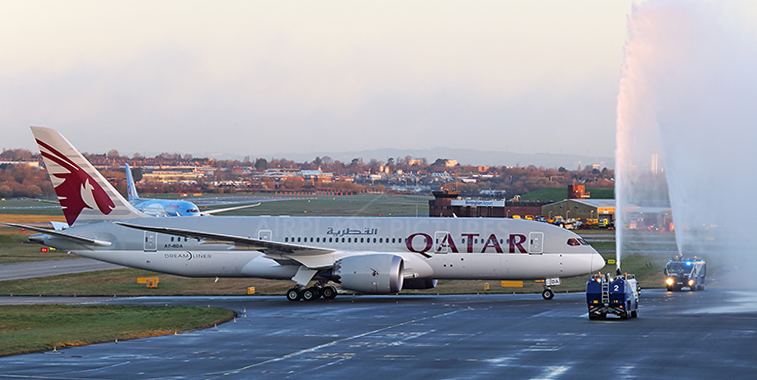 The last route that Qatar Airways launched to the UK was Birmingham in March 2016, with the inaugural flight being greeted with a water arch salute on arrival. Next UK destinations on the cards for Qatar Airways are Cardiff (1 May) and London Gatwick (22 May). In terms of connecting traffic with the airline, the top destinations are Bangkok, Colombo and Perth, with these three accounting for 16% of all connecting traffic from the UK last year based on MIDT data.