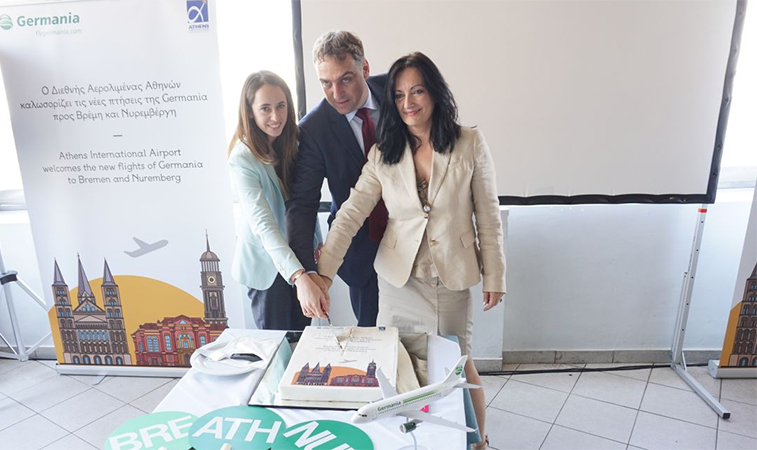 Last summer Germania commenced flights to Athens from Bremen and Nuremberg. Seen cutting the cake at the launch of the routes are: Niki Karagoule-Karageorgou, CEO of SkyExpress (codeshare partner of Germania); Karsten Balke, CEO of Germania; and Ioanna Papadopoulou, Communications & Marketing Director, Athens Airport. Based on the airline’s current schedules for S18, there are still at least five aircraft that need to be allocated to bases for this year’s summer season, with these being one A321 and four A319s.

Nuremberg and Düsseldorf most invested in

Both Nuremberg and Düsseldorf appear to have four based Germania aircraft this summer according to OAG schedules. Each airport appears to have three A319s and one A321 stationed, with both offering a total of 24 routes. However, a benefit that Nuremberg has over Düsseldorf is that it receives a higher average weekly frequency on its services. Along with these bases in Germany, the carrier also appears to have between one and two aircraft stationed in Palma de Mallorca.

Berlin Tegel has seen a major boost in capacity by Germania for S18, with the airline stationing aircraft at the airport to help replace part of the void left by airberlin, with it working closely with tour operators on these services. The last base to open before Tegel was Nuremberg, with this being launched in October 2016. Based on published schedules at the moment, Germania will need at least 31 aircraft this summer to fulfill its planned operation (including Germania Flug, its Swiss unit).

By the peak of S18, Germania‘s fleet will increase to 36 aircraft according to a statement sent out earlier this month by the carrier, although it is unclear whether this also incorporates Germania Flug, which presently has three aircraft. Either way, there are at least five aircraft to be placed at airports for S18, meaning either new bases will be opened, or capacity could still be added to any of those airports listed above. Given that part of its latest expansion was to fill some of the lost capacity at Tegel due to airberlin’s demise, this is likely going to be the case for the extra capacity in S18. Based on the information stated by the carrier, it will hope to operate seven 737-700s, 23 A319s, and six A321s this summer. Including Germania Flug and the aircraft stationed at Palma de Mallorca, with these operations requiring four A319s and one A321 according to ch-aviation, at least one A321 and four A319s are still to be allocated to airports for the upcoming summer, based on the carrier’s aspirations set out in its recent press release.

Using S18 schedules, Germania is steadily branching away from its home market, with a number of routes being flown this summer which do not involve airports in Germany. According to the carrier’s booking engine, the airline will fly scheduled services from Toulouse this summer to Agadir, Dubrovnik and Funchal. From Pristina it will connect to Copenhagen and Paris CDG, while from Beirut it will fly to Stockholm Arlanda. 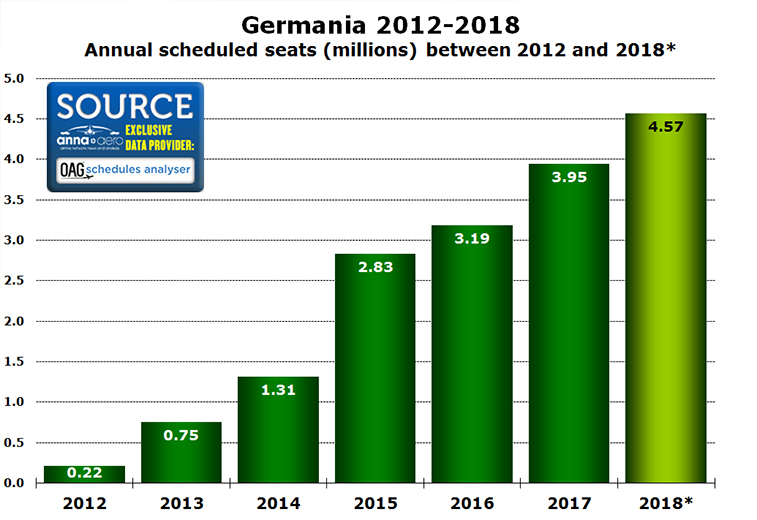 Although this data is for scheduled services, it should be noted that it also has flights scheduled which are not bookable on the carrier’s website. For instance, Germania has a weekly (Saturdays) service scheduled between Palma de Mallorca and Innsbruck this summer, offering a 06:05 departure from the Balearic airport, however this service is not bookable on the carrier’s website. Overall based on current scheduled data, Germania’s 2018 operation should be 16% larger in 2018 than it was last year.

This summer (March-October) Germania is planing to operate 3.78 million seats, up 21% versus the 3.12 million it offered last summer. While this is very respectable, in its recent release, Germania stated that it was to grow by 39% this summer versus S17. In order to achieve this, anna.aero has calculated that Germania still needs to allocate just over half a million seats for S18, taking its total for the summer to just under 4.34 million seats. 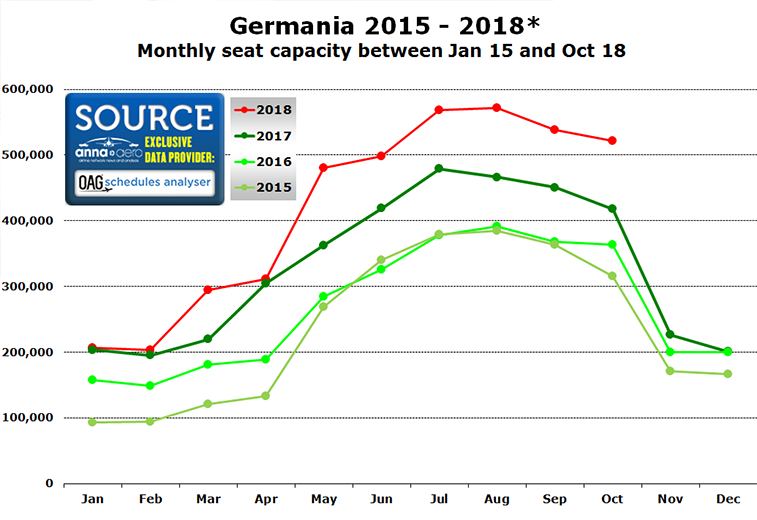 Germania is a very seasonal airline, with its peak summer month (August) seeing nearly three times as many seats as its low month (February). If we take Germania’s monthly seat capacity for 2017 and place it into anna.aero’s Seasonal Variation in Demand Calculator (SVID), it does not fare so well, generating a score of 13.51 – a ‘Poor’ rating. However, the vast expansion of the airline over the past 12 months appears to have improved the robustness of the carrier’s annual performance, with its 2017 result an improvement from its score of 14.06 in 2016, also a ‘Poor’ rating. 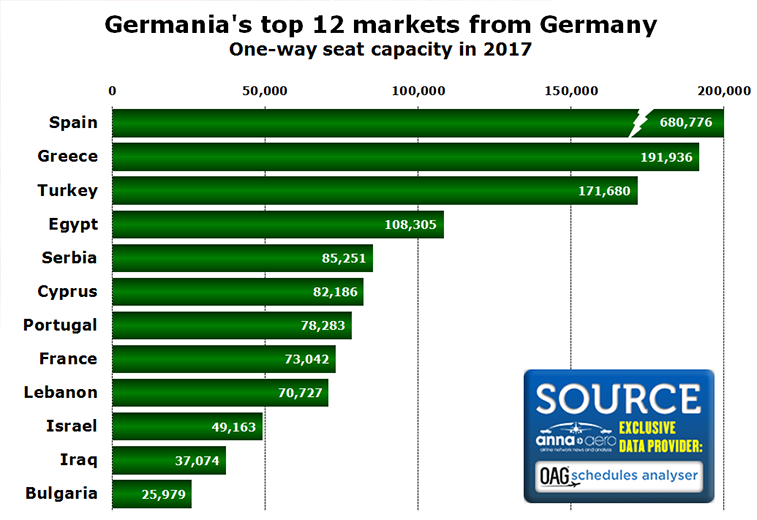 Greece has overtaken Turkey in the past year to become Germania’s second largest market, growing by 83% between 2016 and 2017. Although it has dropped to third, Turkey still posted a respectable increase in seat capacity of 9.8% last year. With many countries that Germania flies to this summer reporting robust growth, exceptions being Iraq (down 1.6%) and Bulgaria (-21%), its will certainly be interesting to see where Germania decides to fly the additional 500,000 seats that it still needs to allocate for this summer. 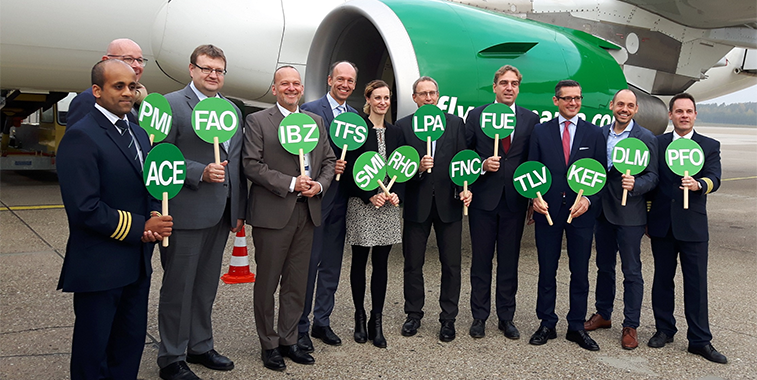 One airport which has certainly benefited from Germania’s recent expansion is Nuremberg, with it now being the home of four based Germania aircraft. With 24 routes being flown in S18, it is now one of the airline’s busiest bases, and with 500,000 more seats still to be filled for this summer, could the airport get more from the airline?