International airline growth picking up at Brisbane Airport; Malaysia Airlines set to return in June; airport traffic has doubled since 2000 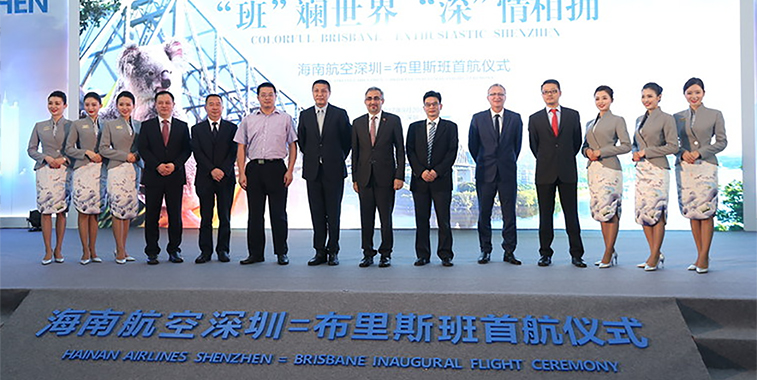 Brisbane Airport welcomed the arrival of Hainan Airlines in 2017 and its new service from Shenzhen. Hainan Airlines was one of three new carriers to begin service to Brisbane last year, with the others being Air China with a route from Beijing, and Malindo Air with a connection from Kuala Lumpur via Denpasar. The next international airline to be joining Brisbane’s carrier roll call is Malaysia Airlines, with it adding flights from Kuala Lumpur starting in June.

Brisbane Airport will greet hundreds of airline and airport network planners this coming weekend as it gears up to host Routes Asia 2018, where anna.aero will once again be producing its glamorous Show Dailies. The airport has been doing very well on the international front in recent years, with passenger numbers on overseas airlines growing on average by 4.2% year-on-year since 2010. This is double the 2.1% increase that was recorded by domestic airlines during the same period.

Based on data published by the Bureau of Infrastructure, Transport and Regional Economics, passengers travelling on international airlines from Brisbane increased by 5.1% in 2017, up from a growth rate of 4.0% in 2016. This compares to just a 1.0% increase in passengers flying with domestic and regional operators last year, with this figure down from a growth rate of 1.6% in 2016. 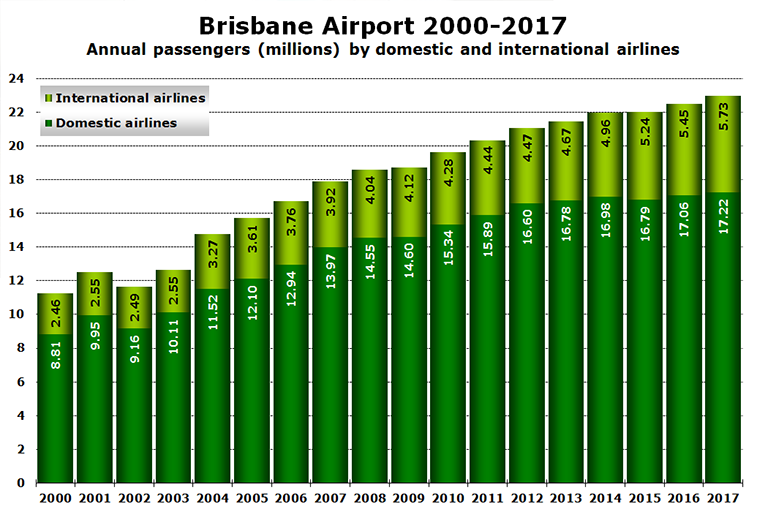 Passengers choosing to fly on domestic and international carriers from Brisbane have shown great improvement since 2000, with domestic airline passenger numbers growing by 95% since the turn of the millennium, and international airline traffic seeing a 133% surge. The development of Brisbane in recent years has meant that throughput has grown 104% over the past 18 years, with Brisbane now handling 23 million passengers per annum.

Even with the development of growing international airlines serving Brisbane, home-grown operators are still flying high, with the airport’s top four carriers being Qantas, Virgin Australia Airlines, Jetstar Airways and Tigerair Australia. The combined quartet handled just under 84% of all seats last year. Qantas is #1 with a 35% share of annual departing seats, with Virgin Australia a close second with a 32% stake. Jetstar occupies 11%, with Tigerair Australia handling 5.0%. Emirates, the carrier of choice for anna.aero’s data elves who will be heading to Brisbane later this week, is currently Brisbane’s leading international carrier, with it having a 3.4% slice of the Queensland airport’s market. Its market share may fall slightly in 2018, as the carrier has taken the position to end its routes between Australia and New Zealand’s largest city. 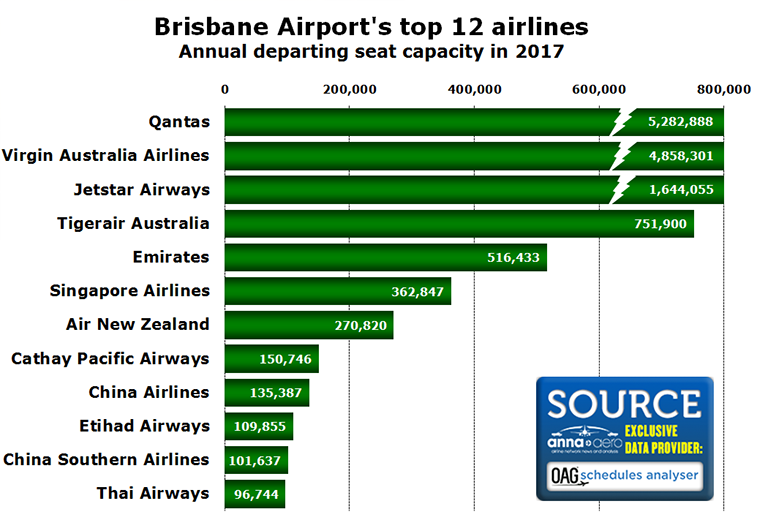 Sydney and Melbourne steal the show

Given the high share of traffic flown by domestic airlines, it is not surprising to see that the top destinations from Brisbane are dominated by Australian cities, with only two of the leading 12 (highlighted in light green) being international routes. Sydney and Melbourne led the way in 2017, with these two routes accounting for 34% of departing seat capacity last year, the same market share the duo held from Brisbane in 2016. 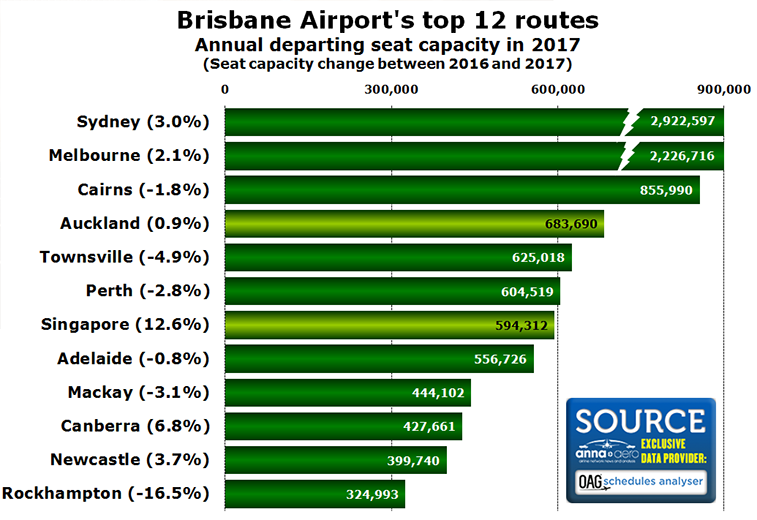 A new runway is currently under construction at Brisbane, with work expected to be completed in 2020. The runway is currently the largest aviation infrastructure project under construction in Australia, with the runway poised to be 3,300 metres long and 60 metres wide, with a further 12 kilometres of taxiway accompanying the new infrastructure. To accommodate the new strip, some 300 hectares of ground has been landscaped, plus 11 million cubic metres of sand has been pumped (dredged and hydraulically placed) onto the site, a phase of the project which was completed in 2014. Once finished, Brisbane should be able to handle up to 1,000 flights per day, with the airport hoping to be handling 50 million passengers per annum by 2035 based on the airport’s 2014 master plan. In order to achieve this aim, Brisbane needs to average an annual increase in traffic of 11%. The airport has forecast that international traffic will account for 11-12 million passengers a year by this point. 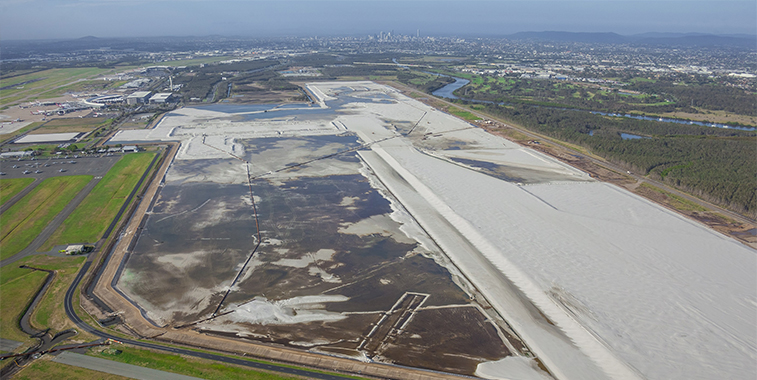 Brisbane Airport’s second runway is due for completion in 2020, with this being the view of the site facing towards the city. The runway sits to the north of the current runway and terminals. When completed, the added infrastructure will allow Brisbane to grow traffic towards its target of 50 million annual passenger by 2035.