Loganair to start Carlisle flights; will offer around 53,000 seats this year on 52 weekly flights to Belfast City, Dublin and London Southend 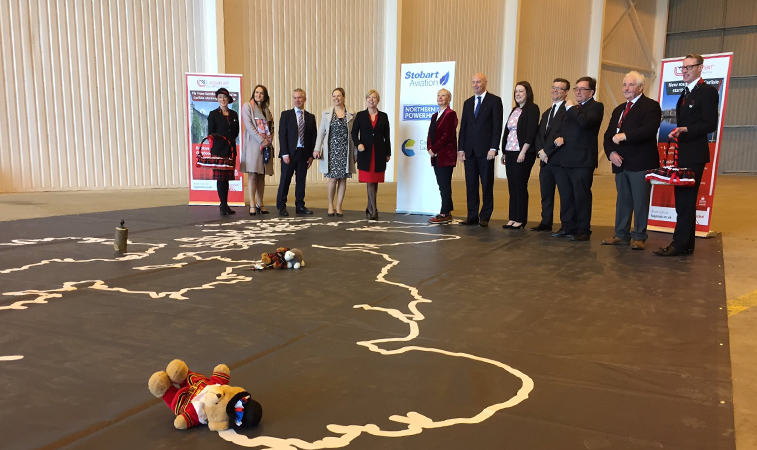 Loganair announced on 12 March that it is to begin operations from Carlisle starting 4 June, opening routes to Belfast City, Dublin and London Southend. Among those taking part in the announcement press conference at the Northern UK airport were: Kay Ryan, Commercial Director, Loganair (fifth left); Kate Willard, Head of Corporate Projects, Stobart Group (seventh right); and John Stevenson, MP for Carlisle (sixth right). The carrier will station one 34-seater Saab 340 at the airport based on published schedules, allowing it to operate 52 weekly flights.

Carlisle Airport welcomed the news that Loganair will start flights from the airport starting 4 June, opening routes to Belfast City, Dublin and London Southend. Jonathan Hinkles, MD Loganair, said of the new venture: “We’re delighted to become the first operator at the new Carlisle Lake District Airport, and will be opening up Loganair’s services to a whole new range of customers.” Also commenting on the news, Cumbria Local Enterprise Partnership (LEP) Director Graham Haywood said: “Carlisle Airport will have a huge impact on Cumbria’s visitor economy and is also a key strategic business asset for the county. Cumbria LEP is investing £4.95 million (€5.57 million) to help make improvements to the airport’s runway and the terminal. Increasing the numbers of high-spending international visitors is a key target within Cumbria LEP’s Rural and Visitor Economy Growth Plan and will help widen the county’s international connectivity. Developing the airport’s passenger offer will provide smoother, quicker access to local tourism attractions and help to increase international tourism visits.”

Based on initial schedules, Loganair will operate 52 weekly flights from Carlisle using a 34-seat Saab 340. It means that by the end of 2018, if schedules are not altered for the winter season and all goes well, the carrier will offer 53,040 seats from Carlisle (give or take a few hundred seats for Christmas Day and any cancellations). The table below shows the S18 timetable for the aircraft at Carlisle.

Based on the timetable, the only free time for the aircraft is Saturday afternoon, with the unit not operating any flights after 14:50. This could be scheduled to allow for aircraft checks, charters, or it could position between Carlisle and Glasgow to allow for an aircraft swap. Overall Southend will see 13 weekly departures, Dublin will be flown daily and Belfast City six times weekly (no Saturday service).

Loganair has designed the schedule to allow for a day return to London, with the morning flight departing Carlisle at 06:50, getting into Southend at 08:15, a flight time of one hour and 25 minutes. The main competition on the London route is the railway, so in order to get a better understanding of how Loganair’s route fairs against rail, anna.aero has done a cost/time saving analysis based on data sourced from the airline and National Rail in the UK on 12 March. Of course it should be noted though that these costs fluctuate between time of booking, demand and date of travel.

Based on the data sources, it looks at these early stages of the route promotion that air has the upper hand to London, with it offering a journey time (including rail fare from Southend to London Liverpool Street) of four hours and 58 minutes, around one hour and 45 minutes faster than the direct rail route from Carlisle to London Euston. Not only is time being saved (although there are later trains from Euston to Carlisle if more time is required in London) but current costs also allows for passenger to save £44.71 by flying and getting a train from Southend into the capital. However, it should be noted that Carlisle Airport is located some 12 kilometres outside the centre of Carlisle, so transport costs to/from the airport at this part of the journey should also be considered. Loganair is also only offering two daily departures, whereas the rail option sees at least two trains an hour.

Of course the market is not 100% outbound demand from Carlisle, with it too supporting a healthy influx of visitors. The airport sits at the top of Cumbria, home to the Lake District National Park. In 2016, Cumbria and the Lake District greeted just over 45 million visitors, made up of 38.8 million day trippers and 6.3 million overnight visitors according to Cumbria Tourism. Combined these visitors produced 59.4 million tourist days and brought in £2.72 billion (€3.06 billion) to the region’s economy, providing employment for 36,240 full-time equivalent posts. As many tourism jobs are actually part-time, or seasonal, the total number of people in tourism jobs is estimated at 62,316, around 20% of the county’s total employment. Between 2015 and 2016, tourist days increased by 4%, tourist numbers saw a 5.2% upswing and tourism revenue grew by 4.1%.

Carlisle is not the only airport in North England to have had a recent taste of Loganair, with Durham Tees Valley having been the location for services to Aberdeen and Norwich, routes launched on 16 October. However, the services did not appear to work for the airline, with flights to Norwich ending after a couple of weeks after the inauguration, while the Aberdeen leg will disappear from 16 March. Given that this has freed-up an aircraft, maybe this allowed for Loganair to shift the unit over the Pennines to Carlisle to start operations from there.