Nordic countries see a 32% rise in seat capacity between 2010 and 2017; Faroe Islands demand picking up pace 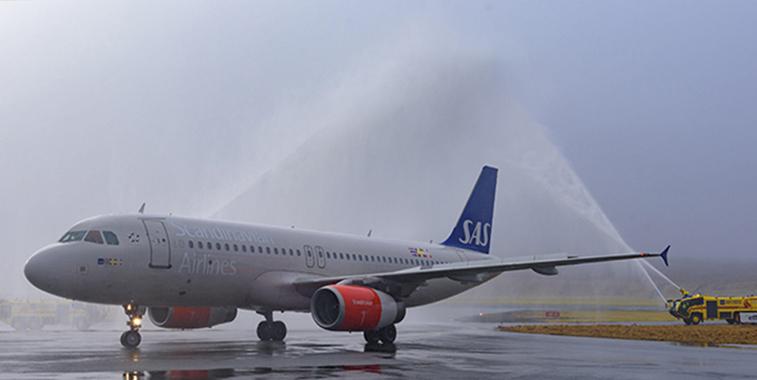 SAS commenced daily flights between Copenhagen and Faroe Islands last March, with the inaugural service seen being greeted with a water arch salute. The Faroe Islands were the best Nordic country for capacity growth in 2017, with departing seat numbers rising by 33%, with Iceland falling to second place (32% growth in 2017). Last year was historic for the Faroe Islands’ Vagar Airport, with it handling over 300,000 passengers for the first time, reaching this feat within the first 10 months of 2017. It is an increase of 43,620 passengers versus the first 10 months of 2016.

The Nordic countries are made-up of Denmark, Finland, Iceland, Norway and Sweden, plus Greenland and Faroe Islands which are constituent countries within the Kingdom of Denmark. Based on 2017 estimates, the nations have a joint population size of 27 million people. To put this in perspective, the total population of the Nordics is roughly one third the size of Germany. The aviation market is very dynamic, ranging from regional operators such as Widerøe to leading LCCs including Norwegian and WOW air. With this broad spectrum of operators, anna.aero has decided to see how the aviation scene has changed during the past few years, particularly as the likes of LCCs have evolved.

Seat capacity up 32% in eight years

The number of departing seats from Nordic countries has risen 32% between 2010 and 2017, with this translating to an average year-on-year increase in seats of 4.0%. Coincidentally, this is the same result achieved between 2016 and 2017 (up 4.0%; 4.33 million additional departing seats). The best country for growth last year was the Faroe Islands, with it seeing a 33% rise in seat capacity between 2016 and 2017. Last year was a record-breaking one for the Faroe Islands, with Vagar Airport handling 300,469 passengers during the first 10 months of last year, an increase of some 43,620 passengers (17% increase) when compared to the first ten months of 2016. This result has knocked Iceland into second place (having been the fastest growing market between 2015 and 2016 – up 36%), with the latter market reporting a 32% rise in seats last year. Overall Nordic countries combined offered 112.87 million departing seats in 2017. 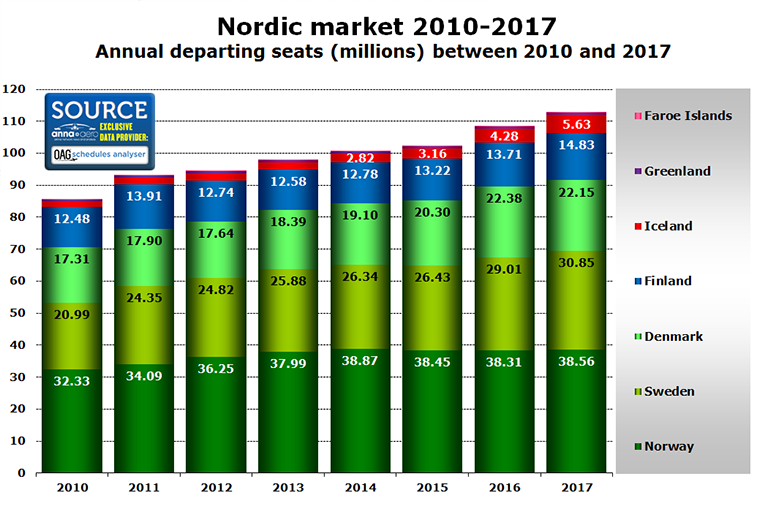 In relation to net increase of seats, Iceland once again falls into second spot, this time sitting behind Sweden, which between 2016 and 2017 saw an extra 1.83 million departing seats added to its market. Iceland handled 1.35 million additional departing seats last year, based on OAG schedules data. Interestingly, given its surge in capacity over the past few years and its numerous headlines in the aviation world for growth, Iceland has not held the number one spot for net seat increases over the time period analysed, despite it being the leading country for growth in three years since 2010 (2016 – 35% growth in departing seats; 2014 – 18%; and 2012 – 12%). While Norway is the leading Nordic country market for seats, its growth has not been as productive as its Nordic cousins, resulting in its market share dropping from a high of 39% in 2013 to 34% last year.

WOW air whizzes into the top 12

Given its expansion drive over the past year from Reykjavik/Keflavik, WOW air has now appeared in the top 12 leading airlines in the Nordics (11th place), with it replacing easyJet as it drops to 14th, a result of the UK carrier’s 5.7% cut in seats (mainly a result of it cutting its route from London Luton to Copenhagen). Of the top 12 carriers in the Nordic region, three (highlighted in red) have reduced operations, with the biggest cut coming from Ryanair which is showing a 9.2% drop in Nordic seats last year. 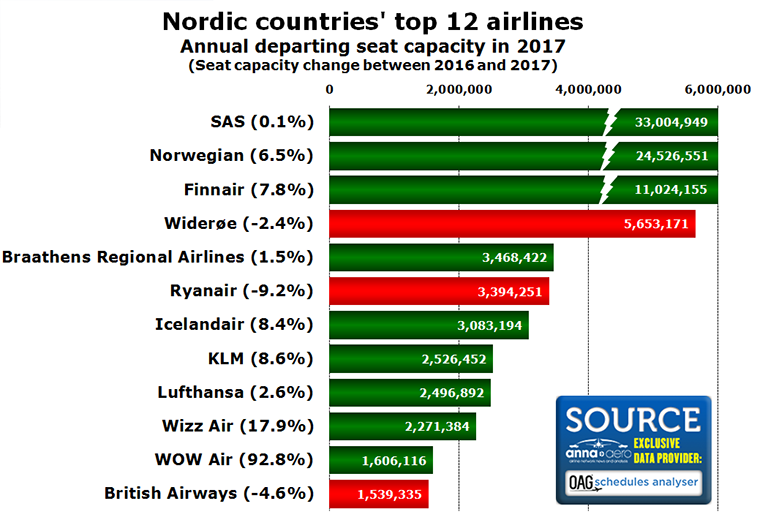 Having seen over a 32% increase in departing seat capacity in 2017, Reykjavik/Keflavik is the leading airport in the Nordics when it came to growth last year. The result has meant that in terms of capacity, it has now overtaken Bergen and Gothenburg airports in the rankings. Second to Iceland’s international gateway for growth was Stockholm Arlanda, with it posting an 8.3% rise in departing seats last year versus its 2016 operation. Copenhagen, the leading Nordic hub, reported a small capacity reduction last year, with departing seats down 1.3% against the total flown in 2016. 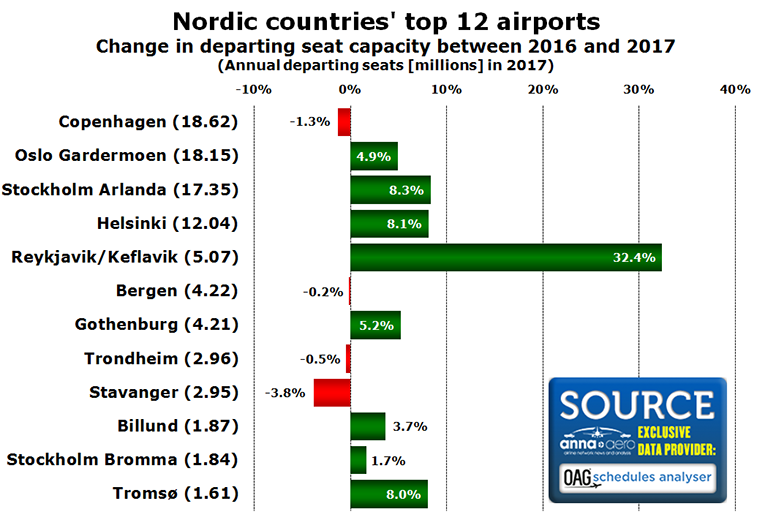 Along with Copenhagen, both Trondheim and Stavanger have also reported capacity drops between 2016 and 2017. Overall these top 12 airports occupied 81% of all departing seats in 2017. Some airports which just missed out on a top 12 position include: Malmo (13th;-0.4% reduction in seat capacity in 2017); Bodo (14th; +4.7%); Oslo Torp (15th; +29%); Stockholm Skavsta (16th; +2.7%); Aalborg (17th; -0.1%); Lulea (18th; -0.4%); Alesund (19th; +2.1%); and Kristiansand (20th; -4.1%). One airport in the region which posted strong growth last year was Rovaniemi (28th), with it posting a 19% rise in capacity last year. Another impressive result was also posted by Skelleftea (29th), as the Swedish airport delivered a 67% rise in departing seats last year. A factor contributing to this sharp rise is due to Norwegian, the region’s second largest airline, starting a link from Stockholm Arlanda. Skelleftea will receive a further boost in S18, as SAS prepares to launch flights from Malaga to the airport. 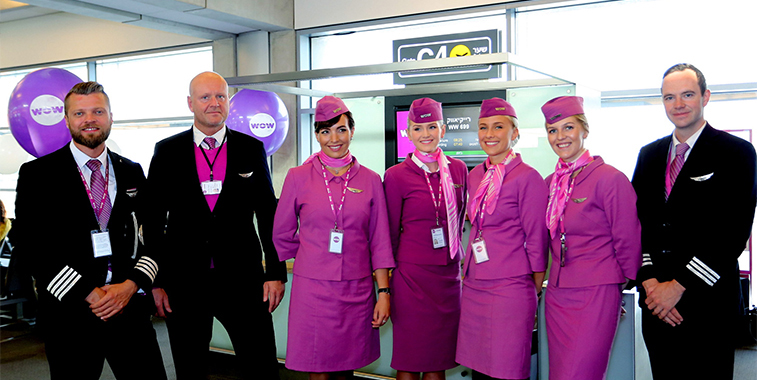 WOW air commenced flights to Tel Aviv from Reykjavik/Keflavik on 12 September, with the inaugural crew posing for a photo at the Israeli end of the service. WOW air was by far the leading carrier for growth in the Nordic region last year, with its seat capacity rising by 93% last year. Its ongoing success has surely contributed to the development of Reykjavik/Keflavik in 2017, with the Icelandic airport posting a 32% rise in capacity last year.