Newcastle-Venice is “Skyscanner Unserved Route of the Week” with 90,000 searches; any of three potential carriers to take this on 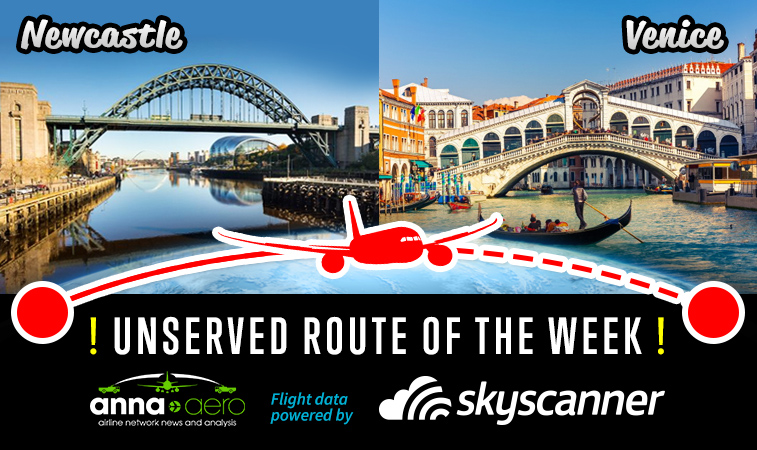 Arrivederci, Pet! There are 75,000 Geordies – the name for the inhabitants of Newcastle upon Tyne and its environs – of the 90,000 travellers identified by Skyscanner data as wanting a direct service between the Northeast England city and Venice. The journey time by gondola, just one of the options that will have to be used until the likes of easyJet, Ryanair or Jet2.com picks up the potential route, is currently 37 days.

With nearly 90,000 searches in the past 12 months, a potential city pair from Newcastle to Venice has been identified as this week’s “Skyscanner-anna.aero Unserved Route of the Week” – a powerful analysis based on aspirational data captured from the Skyscanner.net flight comparison site used by +60 million unique visitors per month. “It would be fantastic to see Venice back on the map from Newcastle; we had a direct service for three summer seasons over 2012-14 with strong demand and passenger loads,” says Leon McQuaid, Aviation Development Manager, Newcastle Airport. 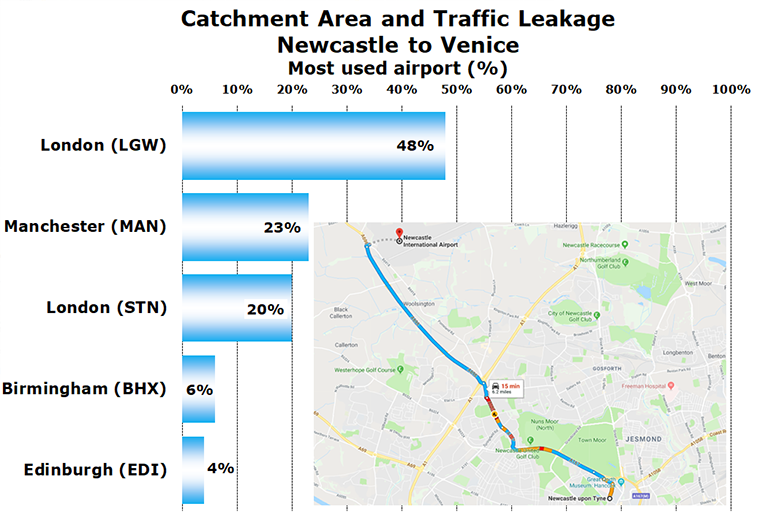 Matt Williamson Skyscanner’s Commercial Executive says: “Newcastle serves less than 1% of the catchment (50 km around the airport) going to Venice. With better service, such as a non-stop operation, Newcastle will capture most of that traffic currently leaking to competing airports.”

anna.aero encourages easyJet or Ryanair to enter or Jet2.com return to this route

Skyscanner demand on this week’s unserved route shows a preference towards the Newcastle end of the city pair, with a 84/16 split, so on this basis we looked at potential carriers at the UK origin first. According to OAG schedules for the week commencing 9 March, the largest carrier at Newcastle is easyJet (22% share of weekly seats). The airline’s route network from its hub presently consists of 10 destinations, of which eight are to European points – namely Alicante (served daily), Geneva (six), Malaga (five), Barcelona (four), Berlin Schönefeld (three), Malta, Tenerife South and Faro (all twice-weekly). Its network increases to 15 points in the peak summer months, with Palma de Mallorca, Jersey, Nice, Split, Rhodes and Corfu added, while winter season only Tenerife South is removed from its programme. The LCC is well-versed in serving the Venice market from the UK, currently offering six departure points – London Gatwick (25 times weekly), London Luton, Bristol (both daily), Edinburgh, Manchester (both four times weekly) and Liverpool (twice-weekly). In the summer season these airports are also joined by a twice-weekly operation from Belfast International. Clearly the Venetian market is at the forefront of the airline’s network thinking, and it represents the LCC’s 12th largest overseas destination from the UK, with nearly 9,000 weekly one-way seats planned in S18. Bearing this in mind, a prospective eighth service to Venice should be high on easyJet’s network growth agenda for S19 onwards.

Behind easyJet at Newcastle is British Airways (15% share of weekly seats). The #2 carrier presently offers just one route from the Northeast UK airport, a 41 times weekly operation to its London Heathrow hub, so it should be viewed unlikely that it would consider a link to Venice at this stage. Not far behind BA in terms of their respective share of weekly seats are Ryanair (13%) and Jet2.com (12%). The Irish ULCC offers 32 weekly frequencies across eight European destinations, none of which are currently in Italy. It does however currently fly 24 weekly departures to Venice from its UK bases, with services operated from London Stansted (19 times weekly), Edinburgh (three) and East Midlands (twice-weekly), augmented by services from Manchester (three times weekly) and Leeds Bradford (twice-weekly) in S18. So again, there is justified scope for Ryanair to complement these services with a summer-season operation from Newcastle.

In fourth spot at the UK regional airport is Jet2.com. The LCC previously served the Venice market from Newcastle twice-weekly between May 2012 and October 2014. This summer it will be offering a Venetian route from four of its UK bases, with Manchester, (five times weekly), Birmingham, Edinburgh and Leeds Bradford (all twice-weekly) the beneficiaries. It is interesting to note that Newcastle is around 105 miles (170 kilometres) south-east from Edinburgh and its is also about 100 miles (160 kilometres) north-east of Leeds Bradford. The Scottish capital city will boast nine weekly flights to Venice this summer and the Yorkshire airport will also have four weekly flights in S18, yet Newcastle which sits in between the two other airports has none. Surely an opportunity exists in the middle of this market, perhaps for a Jet2.com return, onto a Venice sector from Newcastle.

“In 2014 the market stood at approximately 20,000 passengers per annum, a mixture of direct [79%] and indirect [21%] traffic,” adds McQuaid. “Despite the absence of a direct service the market has remained strong with over 6,000 indirect passengers per annum in 2017 [Source: MIDT], and a further 13,000 from Newcastle’s catchment area travelling to alternative airports with direct services [Source: 2017 CAA Leakage Data].”

Venice is served by two main airports, with Marco Polo over three times larger than the city’s smaller Treviso airport. Considering the Italian end of the route, Marco Polo’s leading capacity provider of its current 39 serving airlines is easyJet, which offers 30% of the airport’s weekly seats. Its claims on starting this city pair are only improved by the fact that the LCC is leading carrier at both Newcastle and Marco Polo. The #1 airline currently at Treviso, Ryanair (84% share of weekly seats), has also been cited before as a potential carrier on this sector, so like easyJet, it is surely a case of when and not if for either carrier to start contemplating this potential route. Perhaps with this compelling Skyscanner data, Newcastle will become the next UK service from either carrier’s Venetian operations. 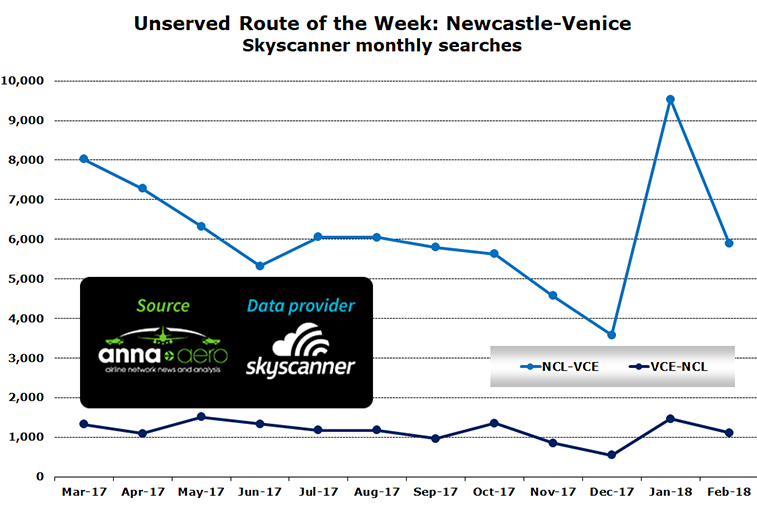 When looking at the previous year of search data (graph above), the busiest month (from Newcastle) is January 2018, with nearly 10,000 searches. Given the anticipated booking profile of the route – short-haul leisure – just over 60% of travellers on this potential sector will want to book between seven to four months before departure, so this would seem to indicate that the busiest months for traffic will be between May and August. Using the same methodology for the Venice end of the sector, the peak months for traffic will be between September and December.

According to OAG Traffic Analyser, because there is no direct service, the top three connecting options chosen by those passengers who did book travel between Newcastle and Venice in the last 12 months (year ending January 2018) indicates that the majority of connecting travellers used Amsterdam (52%) Paris CDG (23%) and Heathrow (22%). Looking at the traffic flows in the opposite direction, the top three airports above are found in the same order, but with Amsterdam increasing its share to 58%, while Heathrow drops to 15%, and CDG remains on 23%.

Indeed, an O&D market that is not served by a non-stop flight will typically display a low purchase rate and low traffic. In this instance Skyscanner’s Travel Insight indicates a monthly average purchase rate of 4.2% for the Newcastle to Venice route (see graph below). Therefore, if there was a Newcastle to Venice route, and if bookings performed in line with the “Skyscanner market average” for direct services at both airports (6.7%), the airline operating this route could immediately expect an improved purchase rate of 60%, without any increased marketing spend. However, with nearly 90,000 annual searches in the last year, and with the sector being operated by an appropriately-sized aircraft for the type of route, a two or three times weekly seasonal service should be immediately viable for the airline choosing to start this potential city pair. “I’m confident the return of a direct service would be hugely popular,” concludes McQuaid. 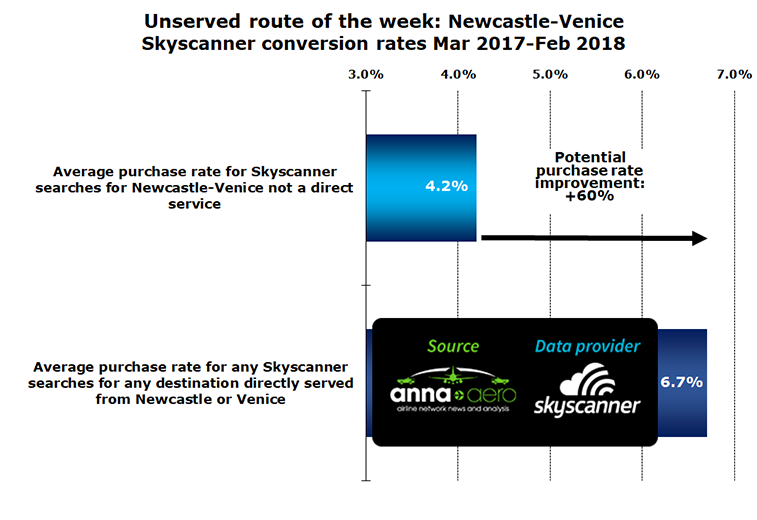