Registration is open! Aer Lingus team captain is first in line for Budapest Airport-anna.aero Runway Run 6.0: “The Race to Find the Fastest Airline in the World” 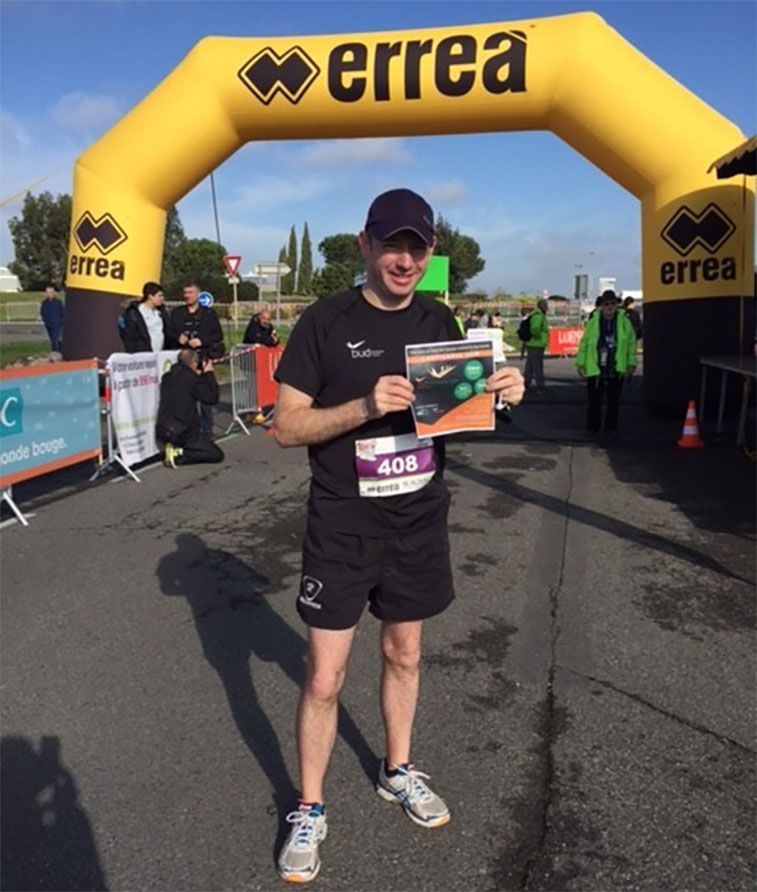 Dedicated to the cause: Aer Lingus Revenue Management Analyst and Running Team Captain, Wayne Forde, takes a Budapest Airport-anna.aero Runway Run flyer with him wherever he goes, to promote the air transport industry’s premier charity-sportive event. Seen here in Toulouse last weekend, having just run a fairly respectable 2:12:06 half marathon – he claims no training took place – we’re thinking Forde would be a good addition to the race promotional team.

From the beginning, the Budapest Airport-anna.aero Runway Run has attracted a loyal following, among those top supporters would have to be previous champions Aer Lingus. Returning year-after-year, fitter, stronger and in bigger numbers, the IAG carrier didn’t waste a moment in signing up to this year’s competition in the hope of reclaiming the coveted title of “The Race to Find the Fastest Airline in the World”.

“I was keeping an eye on the anna.aero site and had my finger poised on the mouse, ready to register. I had to be first in this year…the first of a good few more! We’re determined to win,” declares Aer Lingus Revenue Management Analyst and Running Team Captain, Wayne Forde.

Regular runner Forde, who last weekend proudly took it upon himself to fly the flag for the runway run at the 21km de Blagnac, in Toulouse – has lined up alongside an expanding team of Aer Lingus runners since the first race in 2014. Completing the half marathon in a reasonably decent time of 2:12:06, Forde does have a respectable Budapest runway 10km personal best (PB) of 51:07: “In my younger days I did have a 10km PB of 48:12. I keep trying to aim to break that time, and if there’s ever a place to do it, Budapest would be it…given that it’s flat,” enthuses Forde.

Think you could be a challenge for Forde and his team, or any of the current trophy holders and run off with a title such as ‘Fastest Aviation Enterprise’ or ‘Fastest 10km Runner’? Or maybe you just want to be part of the unique experience of running down the runway in the awesomely beautiful city of Budapest then register now! Dedicated Budapest Airport-anna.aero Runway Run competitor, Wayne Forde, Aer Lingus Revenue Management Analyst and Running Team Captain was this year’s very first runner to sign up: “I had my finger poised on the mouse ready to register. I had to be first in this year…the first of a good few more.”

Runners from airlines, airports and enterprises across the aviation community are invited to join us on Budapest Airport’s Runway 13R-31L on Saturday 1 September 2018 for the sixth air transport industry’s premier charity-sportive event.

All entry fees – still just €35 before July 2018 – are donated to charity. Comprising of three races – 10km (four runway lengths), 5km (a distance manageable even by first-time runners) and 1km for children (6-15 years old).

‘Fastest Airline in the World 2014 & 2016’: A loyal and spirited team of 24 Aer Lingus runners returned to Budapest last September determined to hold on to the coveted title for a third time. First place was snatched from them by home-based airline Wizz Air, but the IAG carrier will not be defeated and their team captain is the first to sign up for this year’s event.