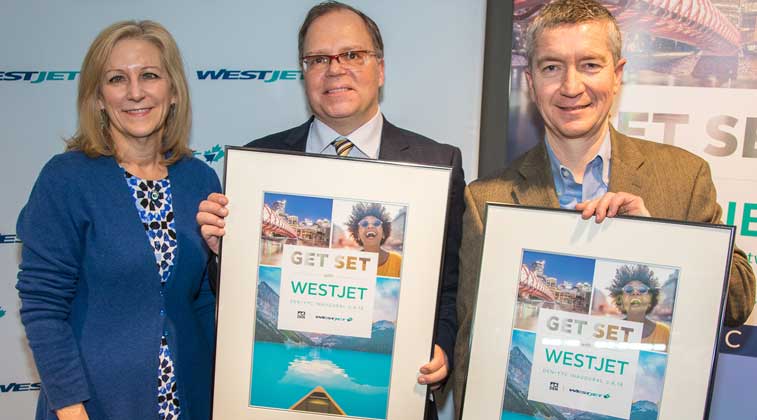 WestJet provided nearly 5.2 million seats from Calgary in 2017, making the Canadian airport the second-largest in the airline’s network. It is continuing to add new routes in 2018 and on 8 March it commenced daily flights between Calgary and Denver. Marking the occasion at the US-end were: Kim Day, CEO Denver Airport; Stéphane Lessard, Consul General of Canada in Denver; and Cameron Kenyon, EVP Operations, WestJet.

WestJet is the second largest airline in Canada, based on published departing seats in 2017. OAG schedule data used in this analysis also incorporates the capacity and flights operated by its regional subsidiary WestJet Encore under the parent carrier’s WS flight code. Calgary is the location of WestJet’s headquarters, but it was only the second largest airport in the airline’s network in 2017 after Toronto Pearson pipped it to the post with a marginal advantage in departing seat numbers. ch-aviation shows that the Canadian airline currently operates a fleet of 737 MAX 8s (five active aircraft), 737-600s (13), 737-700s (54), 737-800s (48) and 767-300ERs (four). WestJet Encore has a fleet of 44 Q400s.

WestJet grew its capacity at Calgary from 3.58 million departing seats in 2008 to 5.18 million last year, representing an increase of 45% during the time period analysed. The carrier only presided over one year-on-year decline in seat numbers in its Calgary network during that period. Those cuts took place in 2010 when capacity fell by 1.8%. Since then, the carrier has enjoyed seven straight years of back-to-back growth at the airport, with the number of available seats increasing by 43% from 2010 to 2017. The average capacity on WestJet’s departing flights from Calgary increased from 133 seats in 2008 to 135 in 2012, before dropping to 120 in 2017. The decline in average capacity since 2012 is mostly likely due to the introduction of WestJet Encore services during that year, with the regional carrier’s Q400s offering fewer seats than the 737s. 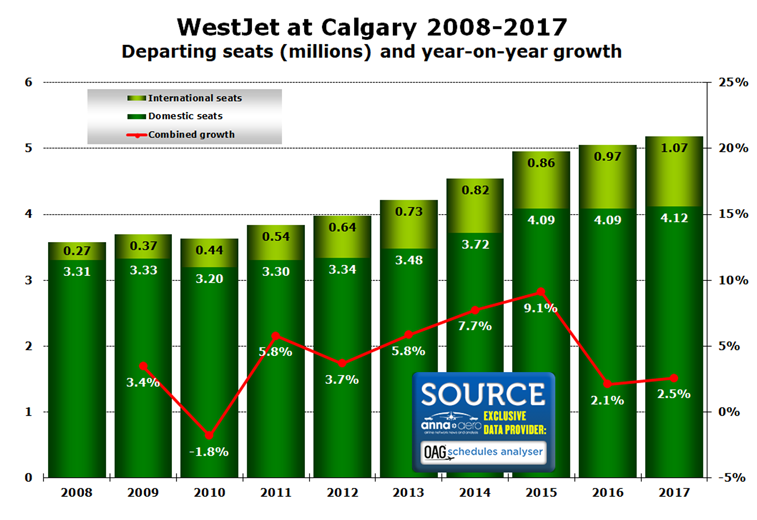 The majority of WestJet’s capacity from Calgary is flown on domestic links, but international seats are on the rise. In 2008 domestic routes accounted for 92% of the LCC’s departing capacity from Calgary, but by 2017, this had fallen to 79%. From 2008 to 2017 the airline increased its domestic offering from 3.31 million departing seats to 4.12 million, a growth rate of 25%. Over the same period it grew one-way international seat numbers from 269,000 to 1.06 million, an increase of 295%.

The nine largest destinations in WestJet’s Calgary schedule in 2017 were domestic. The top Canadian route was Vancouver with close to 650,000 departing seats available last year. The next largest was Toronto Pearson. Between them these two destinations accounted for 30% of WestJet’s domestic capacity from Calgary in 2017. OAG schedules show that during the week commencing 13 March, WestJet will operate 98 flights from Calgary to Vancouver, with a minimum of 15 daily rotations on week days.

Of the top 12 domestic routes served from Calgary by WestJet in 2017, eight experienced an increase in annual capacity compared to 2016, while four (highlighted in red) witnessed a year-on-year decline. The largest gain was seen on the link to Winnipeg which enjoyed a 10% jump in seat numbers. The biggest cuts came on Comox services, with an 11% decline. WestJet offered scheduled seats to seven foreign markets from Calgary in 2017 but the majority of its international capacity serves just three countries. The US is by far the largest of these with more than 750,000 seats available on cross-border services last year. This represented 71% of WestJet’s international capacity from Calgary. The other main international markets in 2017 were Mexico, with 235,000 seats and the UK with more than 55,000. Between them, these three countries accounted for 98% of WestJet’s international seats from Calgary last year. Eight of the top 12 international routes served US destinations. The only European link to feature was the airline’s service to London Gatwick. Most of the top-ranked international links experienced an increase in annual capacity in 2017. The largest increases came on the Houston Intercontinental (60% increase), Gatwick (47%) and New York JFK (42%) sectors. Where the latter two were concerned, 2017 was the first year in which they were operated year-round. Only two of the top-ranked routes (highlighted in red) witnessed a decline in capacity, with the largest cuts coming on the San Diego service which lost 8.3% of its seats versus its 2016 offering.

WestJet is continuing to add services from Calgary in 2018, introducing a new daily service to Denver on 8 March. anna.aero’s New Routes Database indicates that during S18 the airline will also add a link to Mexico City, plus a further domestic connection to Whitehorse. 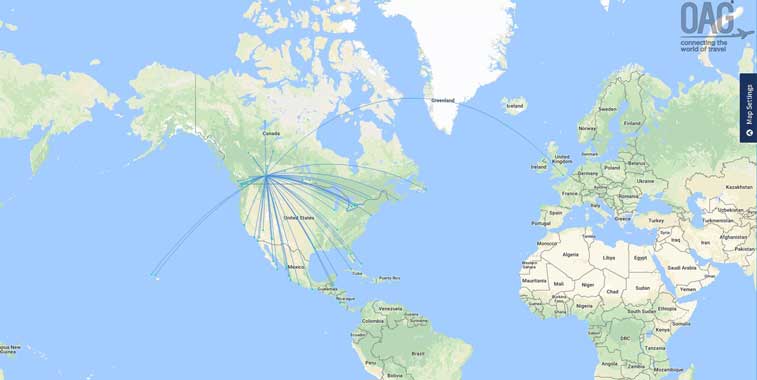 WestJet’s network from Calgary in 2017 included a cluster of services to domestic destinations plus links to the US and Mexico. The route map also shows the airline’s London link, with Gatwick flights introduced in 2016. About 21% of WestJet’s capacity from Calgary was used on international routes in 2017.