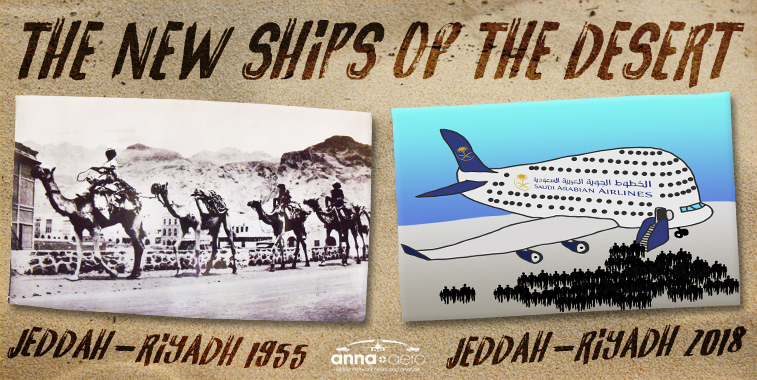 Although many wide-body aircraft are employed on long- or ultra-long haul services, some airlines use their twin-aisle types to provide extra capacity on short- and medium-haul sectors. A review of schedule data for the week commencing 31 July reveals that much of the wide-body short-haul flying will be concentrated in the Asia Pacific region. The route with the most short-haul wide-body flights outside of Asia is the Saudi Arabian domestic sector between Jeddah and Riyadh.

Not all wide-body aircraft are utilised for long-haul intercontinental links. Some carriers choose to fly twin-aisle types on shorter intra-regional or domestic sectors. In some cases this might be because it is the most effective method of marrying capacity with demand at slot constrained airports. An analysis of wide-body, short-haul schedule data for a typical peak week in S18 reveals that All Nippon Airways (ANA) will provide the most departing flights by airline and Japan the most by country market, while Tokyo Haneda tops the short-haul, twin-aisle airport table.

ANA all alone at head of wide-body short-haul rankings

ANA is scheduled to operate the most weekly wide-body, short-haul flights in S18, based on the period under analysis. It will provide 656 more flights than the second placed carrier, fellow Japanese operator, Japan Airlines (JAL). There is a strong Asia-Pacific presence among the leading airlines with 14 of the top 20 based in that region (highlighted in dark green). There are also three carriers from the Middle East (highlighted in orange) and one each from Europe, Africa and North America (highlighted in blue, yellow and red respectively). The highest-placed non-Asia Pacific carrier is Emirates, which will offer the third-most wide-body flights on short-haul sectors. However, if it had still being flying to Qatar, then almost certainly the Middle East Big three (MEB3) carrier would have snatched second spot from JAL.

The countries with the most representatives among the top-ranked airlines are China (three based airlines) and Hong Kong, Japan, South Korea and Taiwan all with two each. Interestingly, no low-cost wide-body operators feature in the top 20. The airlines making up the top 20 would remain the same if the rankings were arranged by the available capacity on wide-body aircraft, rather than the number of flights operated. ANA remains the largest wide-body short-haul carrier based on seat numbers, but Emirates would overtake JAL as the second-largest airline using this metric. 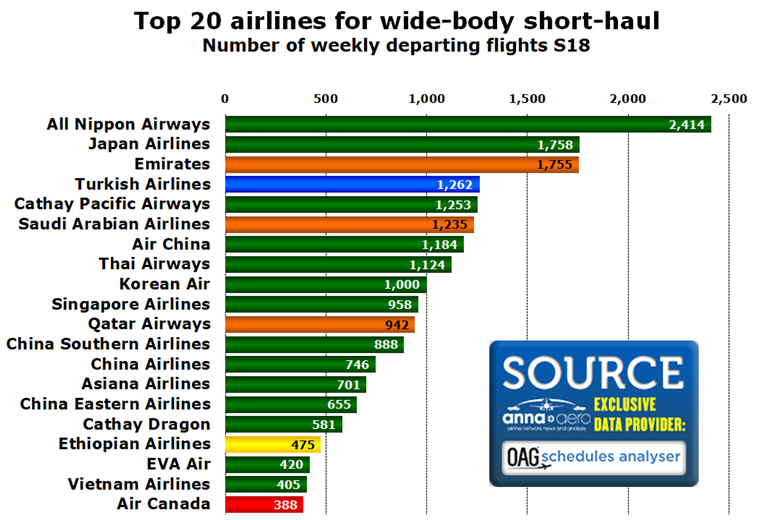 ANA operates a mix of 767, 777 and 787 variants on sectors shorter than 4,500-kilometres in length. About 79% of the Japanese carrier’s weekly short-haul wide-body flights in S18 will be operated on domestic services. Its largest single domestic airport pair for wide-body operations is the 879-kilometre link between Haneda and Fukuoka, on which it will provide 119 wide-body-operated flights in each direction during the week under analysis. The presence of Emirates in the top three airlines for shorter-haul wide-body flights is not surprising, given the extent of its network through Dubai and the fact that it only operates 777s and A380s. A number of major carriers with significant wide-body fleets are conspicuous by their absence in  this top 20 table. These include European flag carriers, the US Big three (USB3), and Etihad Airways, the only missing member of the MEB3. British Airways (BA) was the highest-ranked European flag carrier after Turkish Airlines, ending up at number 33, with 225 weekly short-haul wide-body flights. BA takes the honour of operating the shortest bookable wide-body route during the week commencing 31 July, with two flights available in each direction on the 100-kilometre sector between St. Kitts and Antigua. This forms part of a service operating from London Gatwick to St.Kitts via Antigua with the airline’s 777 fleet. American Airlines was the highest-ranked USB3 carrier, finishing at number 25.

Japan has jumbo lead on rest of Asia Pacific

Japan is scheduled to be the top country market for departing short-haul, wide-body services in S18, offering 341 more weekly flights than China. Asia Pacific is once again the dominant region, accounting for 11 of the top 20 country markets (highlighted in dark green). The highest-ranked market outside of Asia Pacific is Saudi Arabia, which tops a mini-league of four Middle Eastern countries (highlighted in orange). Saudi Arabian Airlines offers a number of wide-body services on regional and domestic routes. The short-haul sector on which it provides the most wide-body rotations is the domestic link from Jeddah to Riyadh. Saudia will serve this sector with 115 wide-body flights operated by a mix of A330s, 777-300s and 787-9s during the week commencing 31 July. Outside of Asia Pacific and the Middle East, the remaining top 20 country markets include two in North America (US and Canada, highlighted in red), two in Asia (India and Pakistan, highlighted in light green) and Turkey, the sole representative in Europe (highlighted in blue). 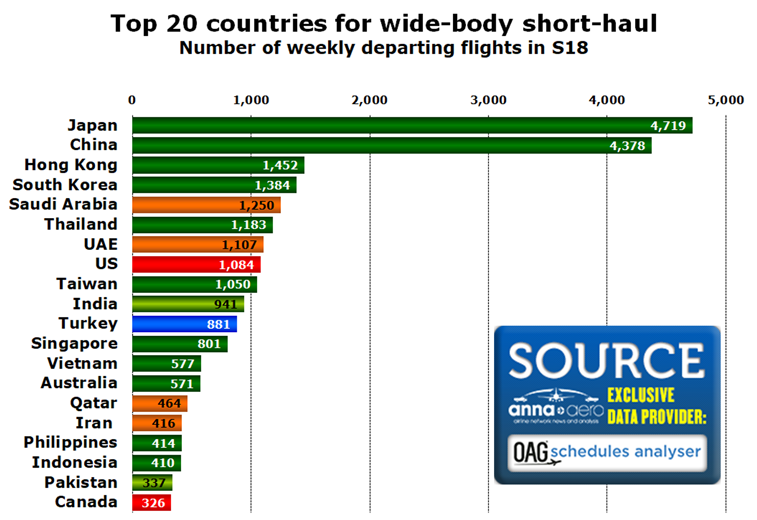 The US claims seventh place in the rankings, despite none of the USB3 carriers making the top 20 for short-haul, wide-body flights, aided by services from Hawaiian Airlines and Air Canada in addition to the home-based operators. Major European markets are absent from the top 20, with the UK, Spain and France offering the most departing flights in this region after Turkey. The three mature markets in Western Europe finished at positions 23, 26 and 27 respectively, with 284, 242 and 222 departing flights.

Haneda is well ahead of its nearest competitor as the top departure airport for short-haul, wide-body services in S18, based on departing flights during the week commencing 31 July. The Tokyo airport will offer in excess of 1,900 departures, 466 more than Hong Kong. ANA will offer 941 wide-body, short-haul sectors from Haneda, while JAL will provide a further 746. Asia Pacific airports (highlighted in dark green) again dominate the rankings in this category, accounting for 15 of the top 20 departure points. A further four of the topped-ranked airports are located in the Middle East (highlighted in orange) with Dubai the largest of the lot thanks to Emirates’ hub network. The only top 20 facility that isn’t located in Asia Pacific or the Middle East is Istanbul Atatürk (highlighted in blue) which is classified here as a European airport. Home hub operator Turkish Airlines will account for 84% of Atatürk’s weekly wide-body, short-haul departures in S18. Six of top 20 airports cover just three cities in the Asia Pacific region, with Tokyo, Shanghai and Seoul all represented by two airports each. 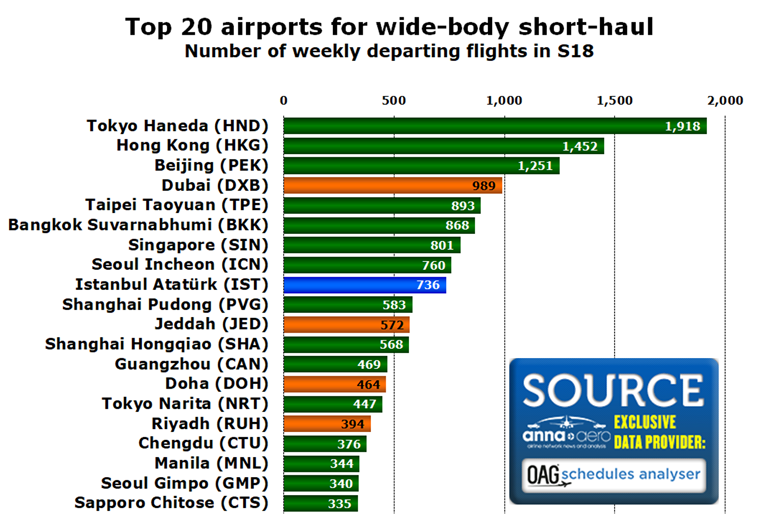 It is notable that no US airports are present, and many European hubs are missing from the top 20. The highest placed US airport is Los Angeles which comes in at number 40, while Heathrow is the next largest European hub for wide-body short-haul after Atatürk, finishing at number 37 in the rankings.

The airport pair with the most weekly, short-haul, wide-body flights scheduled in S18 is the 818-kilometre domestic Japanese link between Haneda and Sapporo Chitose. This route will be operated by three airlines (ANA, JAL and Air Do) offering a combined 259 one-way wide-body departures during the week under analysis. Haneda features in four of the top 10 routes while Beijing is served by three. All of the top 10 routes are intra-Asia Pacific services. The highest-ranked non-Asia Pacific airport pair is the domestic Saudi Arabian service between Riyadh and Jeddah, in 13th place.

This analysis is based on a number of assumptions. At anna.aero we traditionally consider long-haul as anything over 4,500 kilometres (which is consistent with our definition when determining winners in our annual ANNIE Awards). Where this article refers to short-haul, it specifically refers to airport pairs with sector lengths below 4,500 kilometres. Although some of these sectors are essentially medium-haul routes, we have grouped them all under the short-haul banner for simplicity. In any case, many medium-haul routes would be considered relatively short sectors for some wide-body types. The data analysed here refers to a typical peak period in S18, in this case the week commencing 31 July. It is possible that schedules will continue to be adjusted up until the time of operation. Another caveat to bear in mind is that not all direct short-haul wide-body flights recorded by OAG schedules will actually be on sale, since some might be part of triangular services linking two distant destinations to an airline’s home market, where the carrier doesn’t have traffic rights between two foreign points. 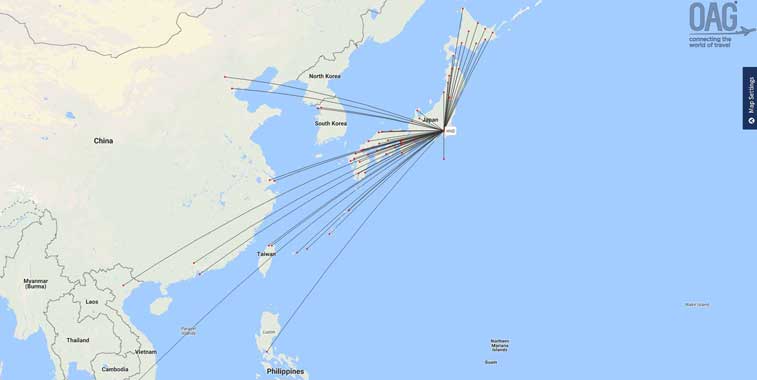 Tokyo Haneda topped the table as the airport with the most departing wide-body short- and medium-haul flights during the week commencing 31 July. The route map showing these services indicates how the Japanese airport has wide-body flights scheduled on a wide range of domestic and regional routes during S18. ANA and JAL both use wide-body types on domestic services from Haneda, with the link to Sapporo Chitose seeing the most short-haul, wide-body departures.