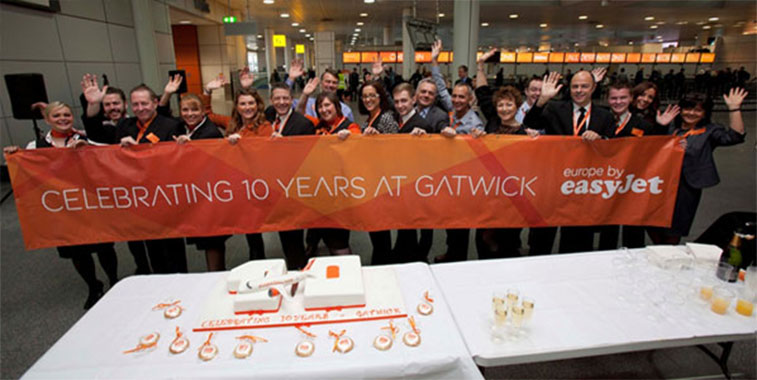 Back in 2012, easyJet celebrated its 10th anniversary at its now largest hub at London Gatwick. In that year, the LCC offered just less than eight million annual one-way seats from its base, meaning it commanded nearly 39% of the airport’s total capacity. In 2017 this figure had risen to over 10 million yearly seats, with the airline growing its operation by on average 8.3% per annum between 2008 and last year.

easyJet, Europe’s second largest airline, has its biggest base at London Gatwick. Its primary gateway to the UK’s capital city is vast, with close to 230,000 weekly (w/c 27 July) one-way seats spread across its 103 destinations during peak weeks in S18. To put its size into context within the airline’s other operations, it is more than double the size of its next largest base at Milan Malpensa (94,728 weekly seats) and bigger than its #3 and #4 hubs at London Luton (88,830) and Geneva (88,038) combined. Putting easyJet’s  operations at Gatwick alongside Europe’s other LCC’s main bases, it is nearly three times bigger than Wizz Air’s London Luton hub, and over 70,000 weekly seats larger than Norwegian’s #1 base at Oslo. However it is 22,000 weekly seats smaller than Ryanair’s #1 operation at London Stansted, and it offers 45,000 less weekly seats than Vueling’s Barcelona behemoth.

Base doubles in size

Since 2008, easyJet has doubled the size of its London Gatwick operation from just over five million one-way seats to 10.3 million in 2017. In 2008, Luton was the LCC’s second largest base (3.4 million one-way seats), followed by Stansted (2.8 million) and then Belfast International (2.1 million). Last year, Luton was the airline’s fourth largest operation (3.9 million), having grown by 15% since 2008, while Belfast International was easyJet’s 10th biggest hub in 2017 (2.4 million), and has been provided with a 19% capacity boost since 2008. By contrast, its Stansted operation has been on the slide since the first year in the graph below, with the airport now only ranking as the carrier’s 16th largest base, posting a 43% decline in annual seats (1.6 million) since 2008. 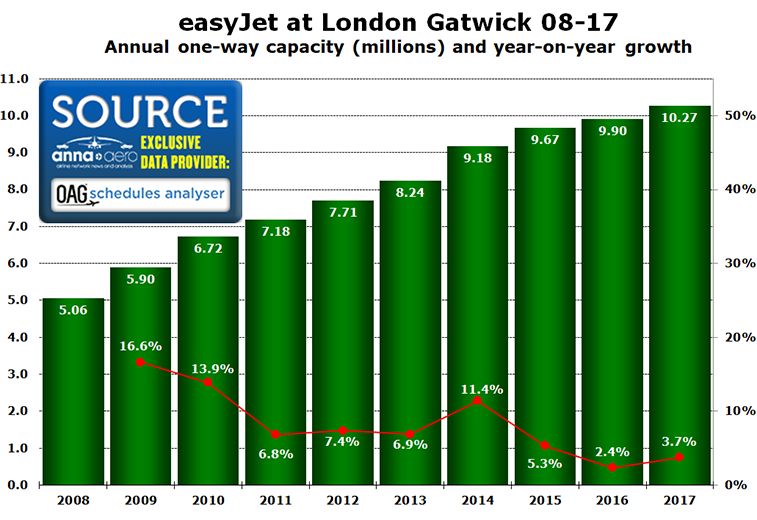 Interestingly, eight of the top 12 routes served by the LCC from Gatwick are going to be operated with the exact same number of weekly flights in this year’s sample week as they were in the same period last year, with a further three routes dropping by just one weekly service. This shows how remarkably stable these presumably mature markets are for the carrier. In July in S17, easyJet offered 1,355 weekly flights from its biggest hub, with the top 12 representing 32.7% of this total. In the same month this year, the airline is expected to operate slightly less flights (1,344), with the top 12 sectors falling by 10 weekly services, meaning their combined shared of the total number of rotations has fallen marginally to 32.2%. 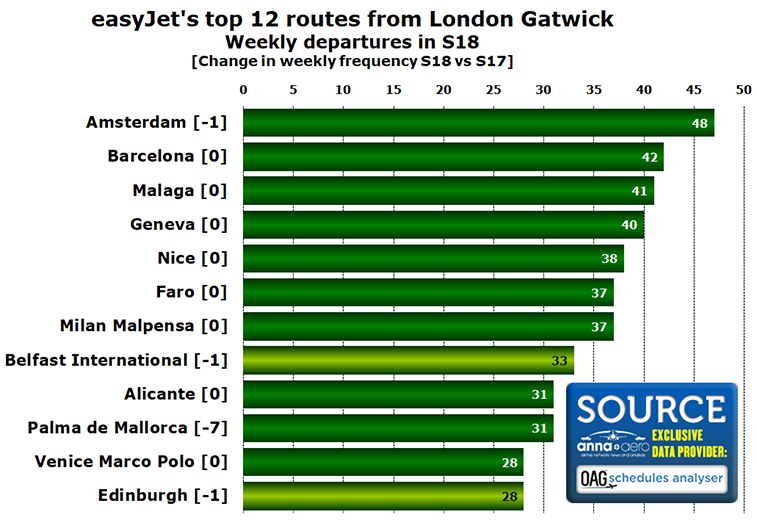 The top 12 routes served by easyJet from its largest base are the exact city pairs which were at the top of the leader board in the same week last year. However, due to capacity to Palma de Mallorca this summer being pegged back when compared to the same week in S17, the Spanish destination has fallen from fifth spot last year to 10th largest in terms of weekly frequencies in S18. Last year Edinburgh, was clear in 11th position, however its slight capacity tweak this year will see it share this spot with Venice Marco Polo. Only two of the top 12 routes are domestic links (highlighted in light green).

Similar to its top 12 routes, the top 12 of easyJet’s 27 country markets flown from Gatwick have gone unchanged since the same week in 2017. However, this time the rankings have also stayed exactly the same, with none of the carrier’s biggest markets growing or shrinking enough to effect their respective positions in the top 12. Although all country markets have shown some marginal capacity fluctuations, the total number of seats in 2018 for the top 12 is planned to be 206,622, just six less than the sum achieved in 2017 (206,628). As a result of all this network stability, the LCC’s top 12 country markets will command 91.0% of the total in S18, just ahead of the 90.9% noted in S17. 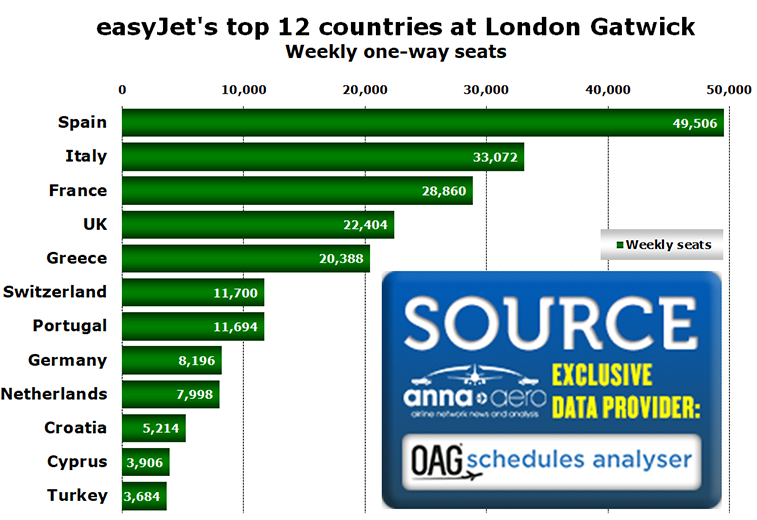 Six of easyJet’s top 12 country markets will witness a capacity increase this summer, when compared to last summer, with Croatia being the pick of these, earmarked to rise by 4.4% year-on-year. Five markets will observe a drop in weekly seats, with the biggest culprit, albeit at marginal levels, being Spain, with a capacity trim of 2.3%. Admittedly from a small base, Estonia will experience the largest capacity hike of the airline’s 27 country markets, up by 67% since last summer, as easyJet increases it service to Tallinn from twice-weekly to three times weekly. Whereas Bulgaria will see the most significant cull in weekly seats, dropping by 21% from S17 levels. Its previously daily operation to Sofia and three times weekly service to Varna have been trimmed back to six times weekly and twice-weekly in S18 respectively. 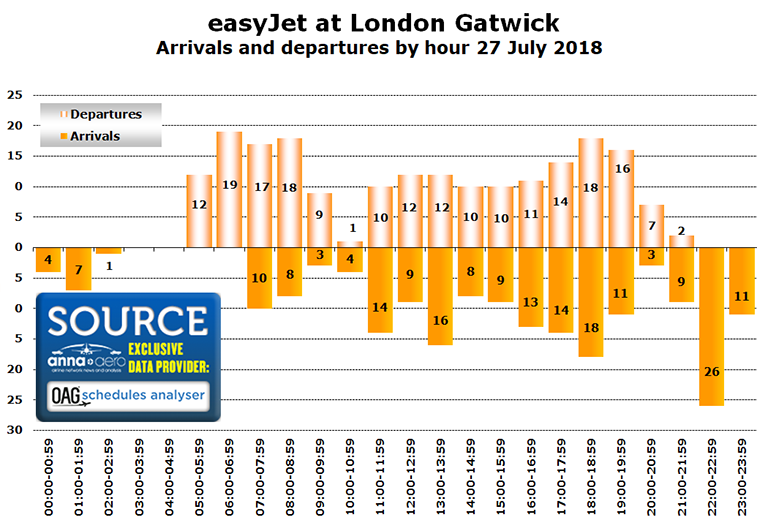 While many of the easyJet’s competitors – namely British Airways, Norwegian, TUI Airways and Thomas Cook Airlines – are growing robustly at Gatwick this summer according to anna.aero’s New Route Database, the LCC’s network improvements are far more modest. In June it is planning to add short seasonal operations (until early September) to Ancona in Italy and Volos in Greece, both with twice-weekly services. Given the evidence above, which seems to indicate that the airline’s flying programme at its biggest base is now fully mature, it is likely that this type of growth at the fringes of it network is all that can be expected from easyJet at Gatwick, at least for the time being. 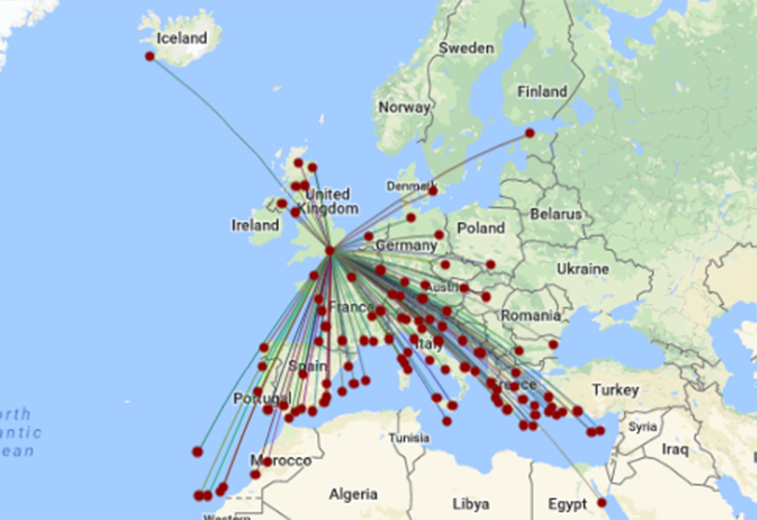 easyJet will serve 103 destinations in 27 countries from its largest base at London Gatwick this summer. The hub, is perhaps reaching full maturity, with many of the airline’s top routes and country markets experiencing only minor capacity adjustments in the peak. It is adding just two short summer seasonal routes in S18, namely to Ancona in Italy and Volos in Greece from June until early September.