Winnipeg-Manila is “Skyscanner Unserved Route of the Week” with 70,000 searches; Philippine Airlines’ next North American route?? 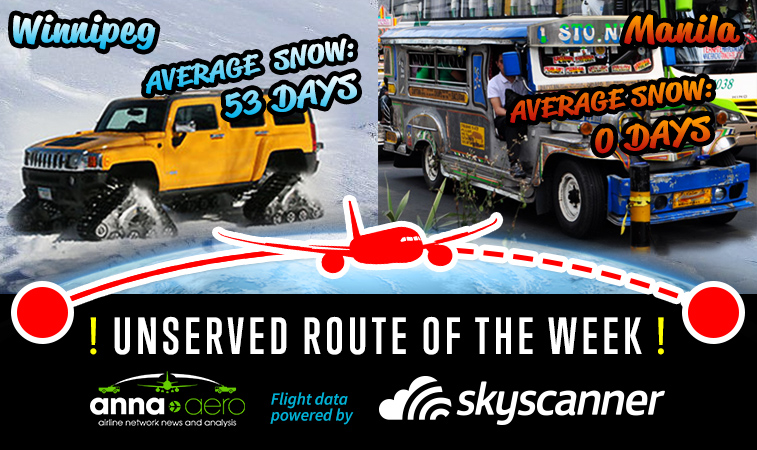 Brrrrr! You need very different forms of transport to get around at either end of this unserved city pair between Canada and Philippines. However there is only one form of transport the 70,000 potential travellers would like to link Winnipeg and Manila – a direct air service.

With nearly 70,000 searches in the last year, a potential city pair from Winnipeg to Manila has been identified as this week’s “Skyscanner-anna.aero Unserved Route of the Week” – a powerful analysis based on aspirational data captured from the Skyscanner.net flight comparison site used by +60 million unique visitors per month. “Philippines is our largest unserved international destination,” confirms Scott Marohn, Director, Air Service and Product Development, Winnipeg Airports Authority. “In fact, more people speak Tagalog in Winnipeg than French.” 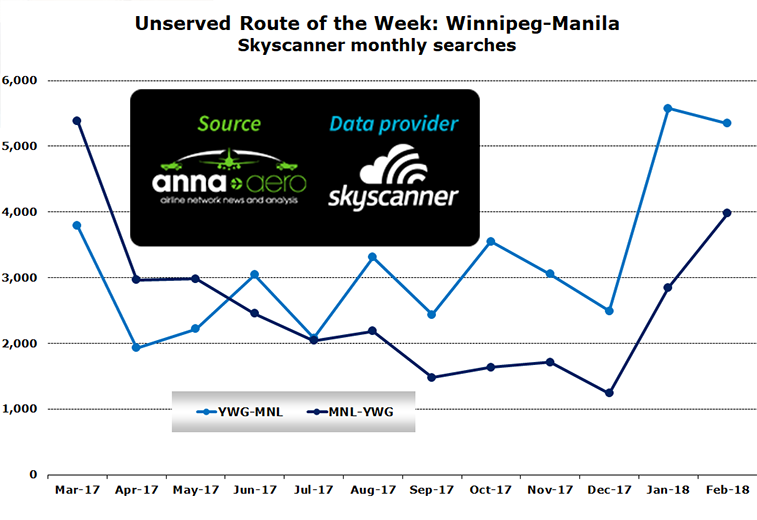 Skyscanner demand on this week’s unserved route shows a slight preference towards the Winnipeg end of the city pair, with a 56/44 split, so on this basis we looked at potential carriers at the Canadian origin first. According to OAG schedules for the week commencing 20 March, the largest carrier at Winnipeg is WestJet (39% share of weekly seats). The airline’s route network from the airport presently consists of 16 destinations, of which seven are international – namely Puerto Vallarta, Phoenix, Cancún, Orlando, Palm Springs, Las Vegas and Montego Bay. Clearly a long-haul route to Manila would require the allocation of one of the airline’s four 767-300s (according to ch-aviation fleet data), which are currently flown to destinations in Hawaii and to London Gatwick from Toronto Pearson, Edmonton and Calgary. As the airline is yet to serve any point in Asia, it should be considered unlikely that WestJet will be considering a new route to Manila from Winnipeg in the short term.

Behind WestJet at Winnipeg is Air Canada (31% share of weekly seats). The #2 carrier presently offers just two overseas routes from its 11-destination network from the Canadian airport, a twice-weekly operation to Cancún and a weekly service to Montego Bay. So again, there is limited scope for the Star Alliance carrier, like WestJet, to complement these services with an intercontinental operation to the Philippines at this time.

“76,680 Filipinos live in Winnipeg according to the 2016 Canadian census,” adds Marohn. “It is the third largest Filipino population in Canada and the largest percentage of any city.” These impressive statistics are backed up by fast food. “Jolibee [Philippines most favourite fast food chain] opened their first Canadian location in Winnipeg last year.”

Contemplating the Filipino end of the route, Manila’s leading capacity provider of its current 40 serving airlines is Cebu Pacific Air, which offers 33% of the airport’s weekly seats. While the carrier is clearly keen on serving international points from Manila, with 25 of its present 48 destinations spread among numerous regional points, as well as places like Australia, Guam and UAE, it presently does not serve North America. By contrast, the airport’s second largest carrier Philippine Airlines (30% share of weekly seats) offers close to 13,000 weekly one-way seats to North America. It serves Los Angeles (double-daily), San Francisco (daily) and Honolulu (five times weekly) in the US, and perhaps more importantly two points in Canada – Vancouver (daily) and Pearson (four times weekly). On this basis, and especially given this Skyscanner data, the national carrier would seem the most likely to consider this potential city pair.

January is likely low travel month from both ends

When looking at the previous year of search data (graph above), the busiest month (from Winnipeg) is January 2018, with nearly 5,600 searches. Given the anticipated booking profile of the route – long-haul leisure – around 60% of travellers on this potential sector will want to book between seven to four months before departure, so this would seem to indicate that the busiest months for traffic will be between May and August. Using the same methodology for the Manila end of the sector, the peak months for traffic will be between July and October.

According to OAG Traffic Analyser, because there is no direct service, the top three connecting options chosen by those passengers who did book travel between Winnipeg and Manila in the last 12 months (year ending January 2018) indicates that the majority of connecting travellers used Vancouver (34%) Hong Kong (24.2%) and Seoul Incheon (23.9%). A total of 14 different transfer airports were used by travellers looking to connect between the two cities. 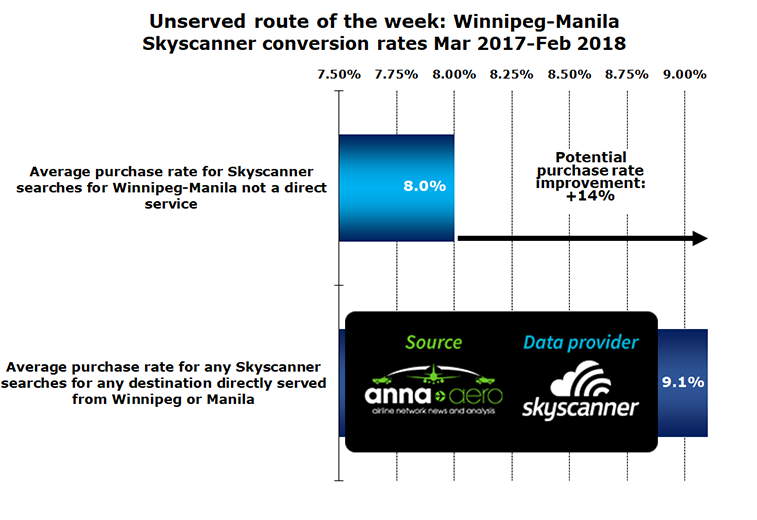 Indeed, an O&D market that is not served by a non-stop flight will typically display a low purchase rate and low traffic. In this instance Skyscanner’s Travel Insight indicates a monthly average purchase rate of 8.0% for the Winnipeg to Manila route (see graph above). Therefore, if there was a Winnipeg to Manila route, and if bookings performed in line with the “Skyscanner market average” for direct services at both airports (9.0%), the airline operating this route could immediately expect an improved purchase rate of 14%, without any increased marketing spend. However, with nearly 70,000 annual searches in the last year, and with the sector being operated by an appropriately-sized aircraft for the type of route, a two or three times weekly service should be immediately viable for the airline choosing to start this potential city pair. “We currently have no direct service to Asia. Any airline starting service would have a monopoly on the market,” concludes Marohn.