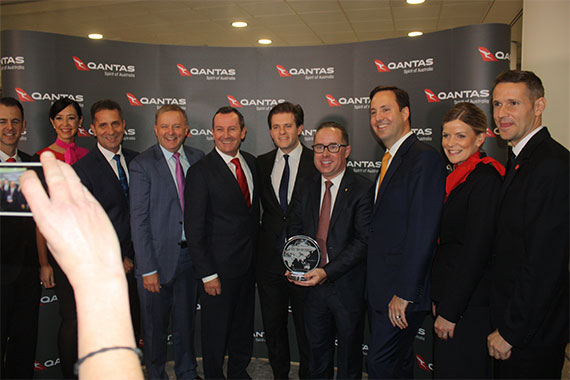 VIP passengers, including the Prime Minister of Western Australia Mark McGowan, and the Australian Tourism Minister, Steven Ciobo, joined Joyce and Qantas crew to accept the anna.aero prize on arrival at Heathrow Terminal 3. 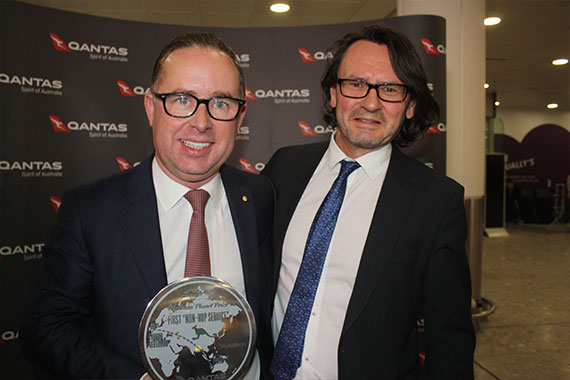 Alan Joyce, CEO of Qantas, is presented with the anna.aero Platinum Planet Prize on arrival by the Publisher of anna.aero, Paul Hogan (not Crocodile Dundee – that actually is his real name).

25 March 2018, London Heathrow Airport: On arrival at London Heathrow at 05.05, Qantas was presented with the anna.aero “Platinum Planet Prize”, an award recognising the world’s first-ever non-stop route from Australia to Europe. The historic new direct service, between Perth and London Heathrow, takes 17 hours and 20 minutes, and covers a distance of 14,499 kilometres (all distances are calculated by anna.aero using OAG Analyser).

While Qantas has been serving Heathrow since the 1940s, this is the first time that the carrier has been able to link the far-flung continents without any kind of refuelling stop en-route.

Alan Joyce, CEO of Qantas said: “Qantas has been preparing for this historical, record-breaking, new route for almost a century since we were founded in 1921. Now, on touchdown in London, with the presentation of the anna.aero Platinum Planet Prize, this historical new route is instantly an award-winning route. I’ll accept this honour on behalf of Qantas, but I dedicate it to all the people who have served this great airline throughout its history, and who have worked ceaselessly for the delivery of the first-ever non-stop route between Australia and London.”

Simon Eastburn, Director of Airline Business Development at Heathrow, said: “We are delighted to be supporting the very first direct air link between Europe and Australia, a true milestone moment, for a hugely popular route. We have been developing Terminal 3 to bring passengers new and exciting experiences and this new service from Qantas certainly enables that, being of real benefit to tourists, families and business travellers alike.”

Perth Airport Chief Executive Officer, Kevin Brown, said: The Qantas inaugural flight to London is an historic moment for Western Australia, as Perth becomes not only a gateway to the United Kingdom but Australia’s Western Hub. “We are delighted that this world-first service is happening at Perth Airport and will connect people to a world full of possibilities,” Mr Brown said.

The Publisher of anna.aero, Paul J. Hogan, said: “Linking Australia to Europe with a direct, non-stop service crosses one of the last remaining unconquered frontiers of air service development. With this historic new service the planet has just shrunk, and the award of the anna.aero Platinum Planet Prize gives full recognition to Qantas for its continued dedication to ground-breaking, long-haul route development.” 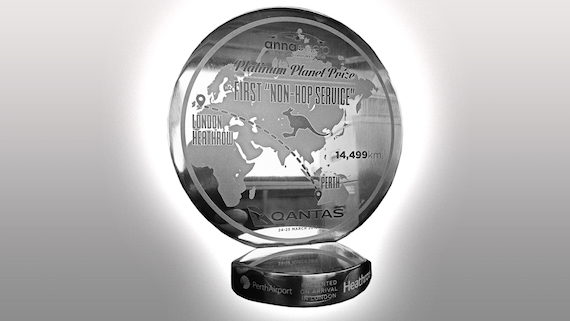 OAG Schedules Analyser defines that the new Qantas connection as being 14,499 kilometres, just 27 kilometres shorter than Qatar Airways’ 14,526-kilometre Doha-Auckland route, which was the winner of anna.aero’s “Platinum Planet Prize” for the world’s longest non-stop air service, in February 2017. The OAG Traffic Analyser data indicates that over 320,000 people travelled between the UK and Perth in 2017, with around 63% of this market travelling to London. Dubai (33% of connecting traffic – Emirates), Doha (18% – Qatar Airways), Singapore (16% – Singapore Airlines) and Abu Dhabi (13% – Etihad Airways) all hold a respectable share of the current one-stop market. Qantas will operate flights between Perth and London Heathrow with its 236-seat 787-9 aircraft. 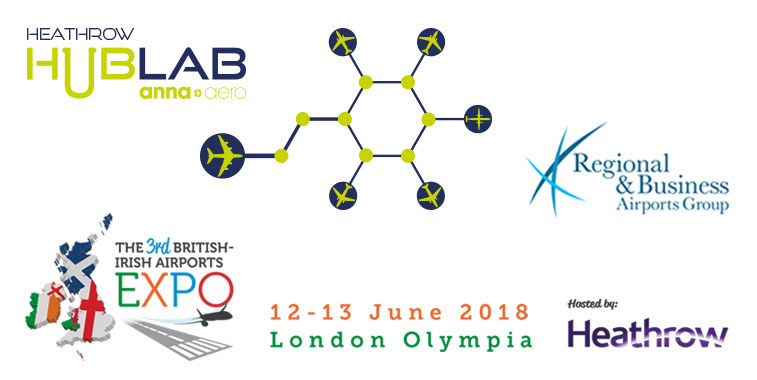 HubLAB, the Heathrow Connectivity Conference with Regional and Business Airports Group (RABA) and anna.aero. You can attend for free. We also welcome proposals for further airport and airline presentations. Register and enquire here.

HubLAB, the Heathrow Connectivity Conference, has been created in joint venture between anna.aero and the 40-airport Regional and Business Airports Group (RABA) to provide an intensive examination of new route propositions for an expanded Heathrow, including the planned new runway.

It will hear plans at CCO and VP network level from easyJet (which is planning a Heathrow base), Virgin, Delta, Flybe and a host of airports.

HubLAB takes place at the Heathrow-hosted British-Irish Airports EXPO at London Olympia 12-13 June 2018 (200 exhibitors, 3,000 visitors). This FREE OF CHARGE conference is compulsory for any airport wanting to advance its prospects of Heathrow services.

Heathrow’s new runway will create at least 50% more slots and allow the launch of dozens of new routes, including a forecast 40 extra long-haul destinations, and at least 15 new domestic services to airports like Dundee, Norwich, Doncaster-Sheffield, Belfast International, Cornwall-Newquay and Jersey. Major cities across Europe which have no Heathrow services – Bordeaux, Eindhoven, Leipzig etc – will also face the chance to connect and feed the Heathrow hub.

What will an easyJet Heathrow base mean?

According to easyJet “Heathrow Expansion will allow low-cost, short haul airlines like easyJet to operate – providing more competition, new routes, more services and lower fares. Heathrow also has the greatest demand from passengers of all types – business and leisure, long and short haul, inbound and outbound.” Robert Carey, Group Director of Strategy & Network, will explain just what this means in a star presentation at the free Heathrow Connectivity Conference.

Other airlines coming to explain their growing Heathrow ambitions include:

In an amazing show of unity on the question of Heathrow, the UK Aviation Minister Baroness Sugg will share the platform with the Scottish Government’s Minister for Transport and the Islands, Humza Yousaf MSP. Yousaf is on record as asserting: “While growing direct international air routes to Scotland remains our priority, Heathrow’s plan addresses how all Scottish airports benefit from the new runway capacity by providing a significant boost to the country’s connectivity.”

You can attend for free. We also welcome proposals for further airport and airline presentations. Register and enquire here.