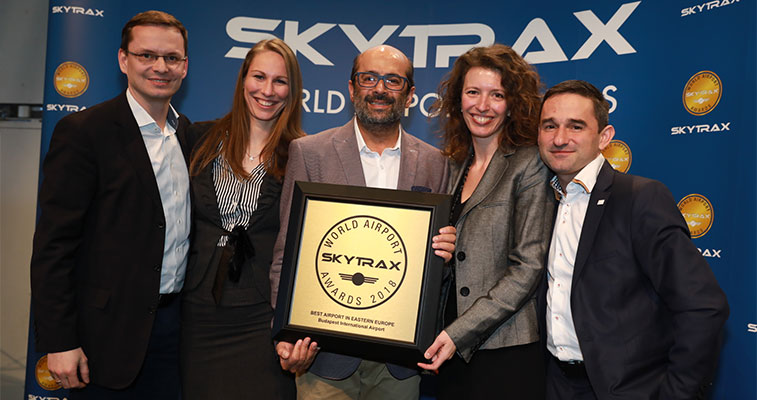 Budapest Airport was announced ‘Best Airport in the Region’ at the Skytrax World Airport Awards, becoming the first Eastern European airport to maintain this prestigious title for a fifth consecutive year. On being told of the accomplishment, Budapest Airport’s CEO, Jost Lammers enthused: “Winning the Skytrax Award five years in a row is immense encouragement to our airport community, every one of whom is committed to delivering excellent services and a memorable experience to all travellers. I am so proud of the Budapest team for breaking the record of the most consecutive wins.” Accepting the accolade on behalf of the Hungarian gateway was Kam Jandu (centre), CCO, Budapest Airport. 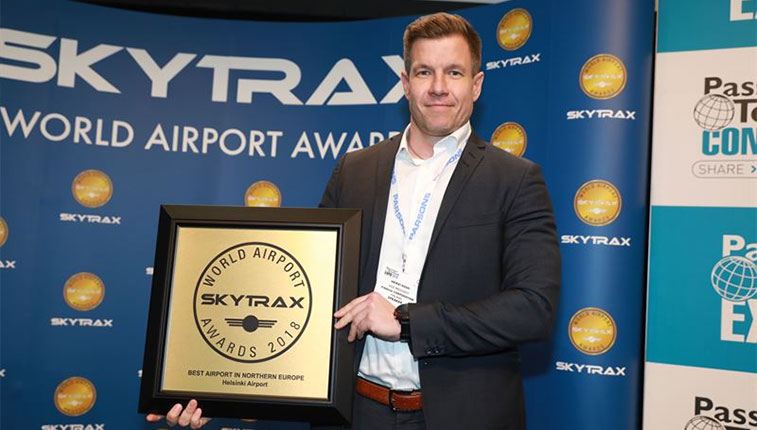 Helsinki Airport was voted the Best Airport in Northern Europe by passengers in the Skytrax World Airport Awards. The award was handed out at Passenger Terminal EXPO on 21 March to Finavia’s Chief Digital Officer Heikki Koski.  ”It is an honour to receive this award by passengers all around the world. It is the best way to verify that our hard work towards enhancing customer experience in Helsinki Airport is paying off. At the same time, I want to warmly thank our Finavia personnel and all of our partners here in Helsinki Airport; without their contribution, this result could not have been possible,” says Helsinki Airport Director Ville Haapasaari from Finavia. 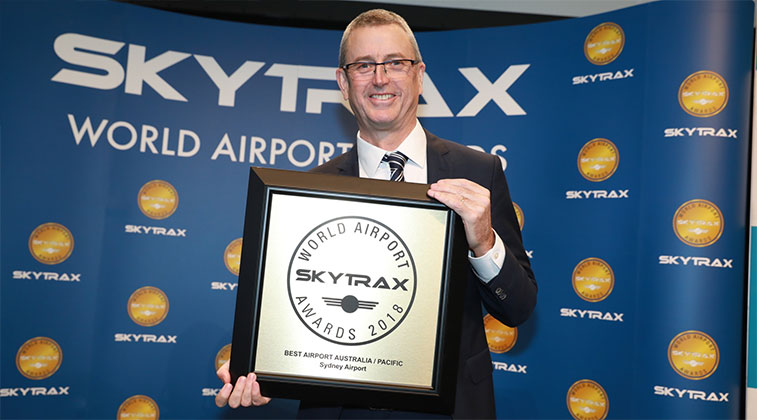 Sydney Airport was voted the top airport in the Australia/Pacific region by customers participating in one of the largest global customer satisfaction surveys. Seen receiving the award on behalf of the Australian hub was its GM Construction and Facilities Management, Chris Evans. Sydney Airport CEO Geoff Culbert was delighted by the news. “To receive this level of global recognition makes me proud of the work the team has undertaken to improve the customer experience at Sydney Airport. We’ve made significant improvements to meet the needs of our customers and to be recognised through this award is humbling. It also inspires us to continue to focus on making our customers’ experience easier and more enjoyable as they travel. We’ve come a long way, but we still have more to do.” 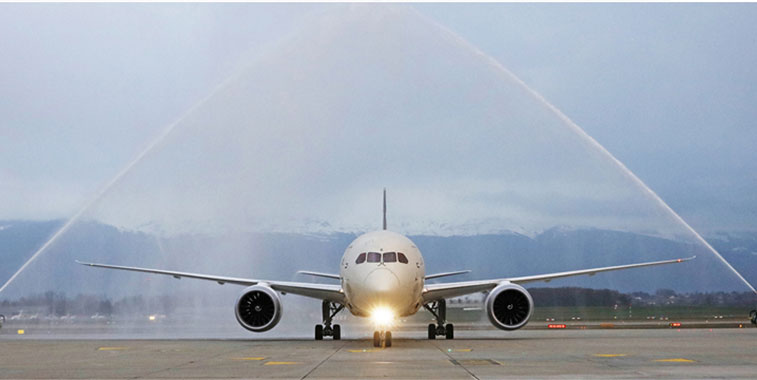 With the start of S18, Etihad Airways’ 787-9 lands in Geneva, replacing the carrier’s existing A330 daily service. With the introduction of a 787 operation at Geneva from late March, all flights between Switzerland and Abu Dhabi are now operated with the type. Geneva also becomes the fifth European destination to be serviced by this next-generation aircraft. 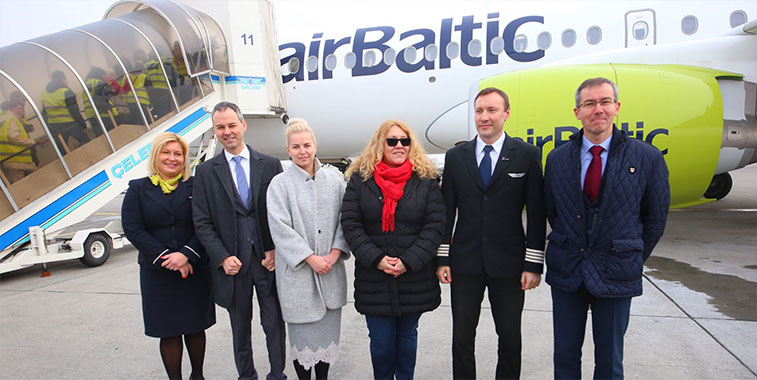 airBaltic has recently upgraded its service from Riga to Budapest. Martin Gauss, CEO, airBaltic comments: “By upgrading the route to the CS300 aircraft, and increasing the capacity offered by 38%, we will boost our competitiveness by being able to offer more comfort and more affordable prices to our passengers.” Gauss added: “Flights to Riga are popular among transfer passengers choosing airBaltic for its convenient connections via Riga. This year the most popular transfer destinations thus far have been Tallinn, Helsinki, Vilnius, St. Petersburg and Moscow among others.” On hand to mark the capacity increase were: airBaltic crew member; Balázs Bogáts, Head of Airline Development, Budapest Airport; Yana Denisova, Area Sales Manager, airBaltic; Krisztina Kovács, GSA of airBaltic; airBaltic Captain; Gints Serafinovičs, Second Secretary, Embassy of the Republic of Latvia in Hungary. On 25 March, Nuremberg marked the inaugural Condor flight to Dubai with a cake and a water cannon salute. The flight is an exclusive charter for German tour operator FTI. “It’s great to see that the first flight was fully booked. Besides Dubai, we’re happy to have Condor now back in our market,” says Christian Kaeser, Head of Aviation Marketing & Business at the German airport. From May onwards Condor will operate a second flight to Antalya every Sunday (in between the Dubai flights). 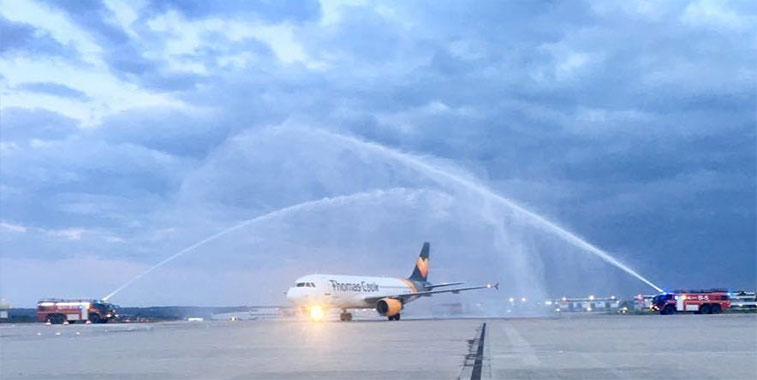 Thomas Cook Airlines Balearics opened its new base on Palma de Mallorca this week, supplementing its existing operations, with airlines in Germany, the UK and Scandinavia. On the new operation, Christoph Debus, Chief Airline Officer Thomas Cook Group, said: “The new airline and base will provide us with the right platform to better manage the seasonal demand in our business, giving us more control at lower cost as we continue to expand the choice of destinations we offer our customers. With more than one million Thomas Cook customers flying into Palma every year, we have a strong existing infrastructure on which to build.” 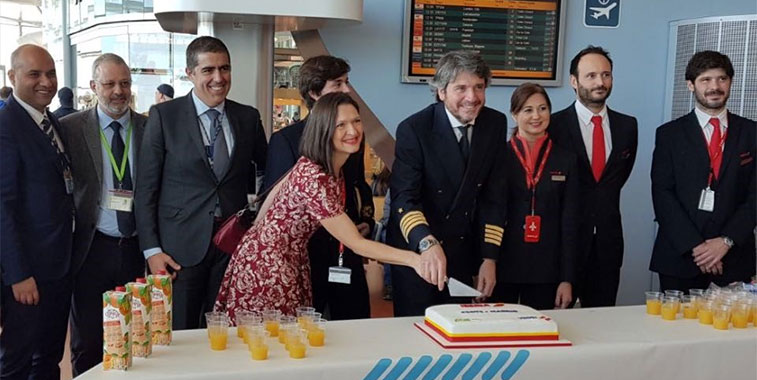 With the beginning of S18, Iberia is adding capacity on the Madrid-Porto route. The Spanish airline will offer 50 flights a week between both cities with A319s, a sector that was previously flown by Air Nostrum. As a result, in 2018 Iberia will offer more than 332,000 seats on this route, 28% more than in 2017. Iberia’s country manager in Portugal, Manuela Barber and the captain of the first flight Jesús M. Alonso cut the commemorative cake along with representatives from Porto Airport, Groundforce and the Iberia flight crew. 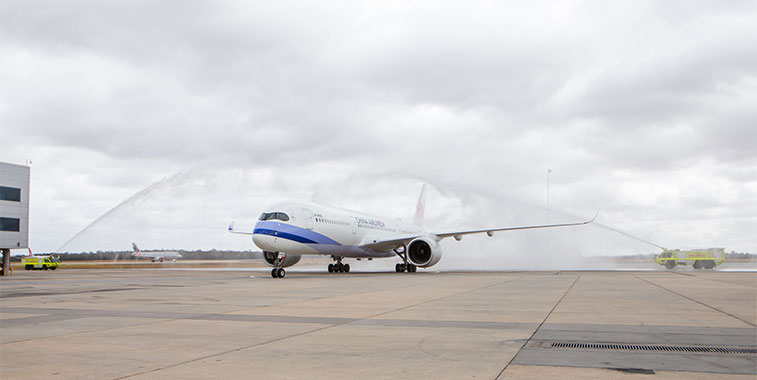 Having only commenced services to Melbourne a little over two years ago, China Airlines is adding capacity and upgrading its product by introducing an A350-900 on the Melbourne-Taipei route. Melbourne Airport Chief of Aviation Simon Gandy said travellers will benefit from the aircraft upgauge, which provides a smoother travel experience and adds 5,631 seats both ways to Melbourne annually. “Next generation aircraft like the A350-900 provide added benefits for travellers, which are evident on long-haul services such as the Melbourne-Taipei route.” Image courtesy of SDP Media.