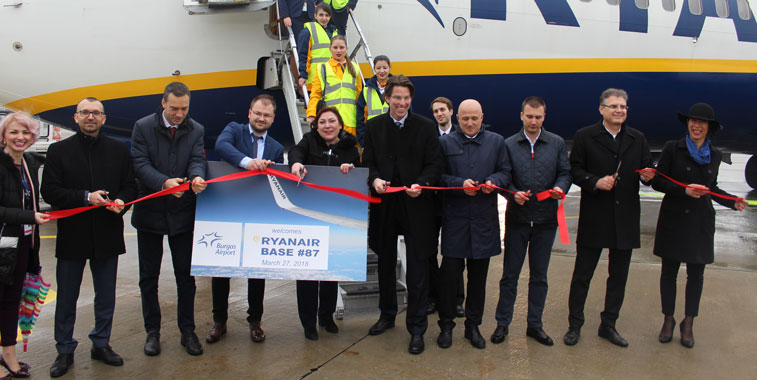 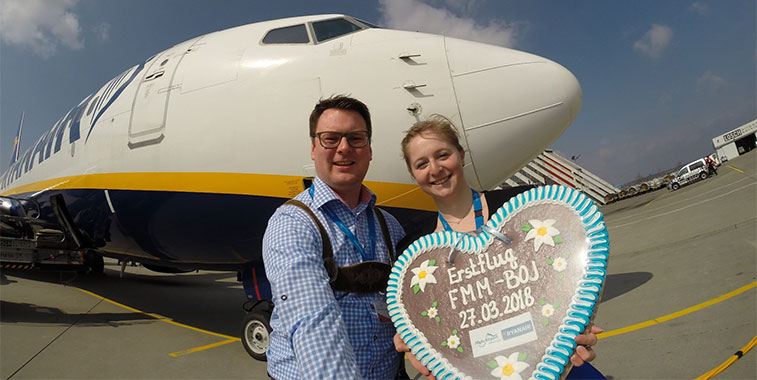 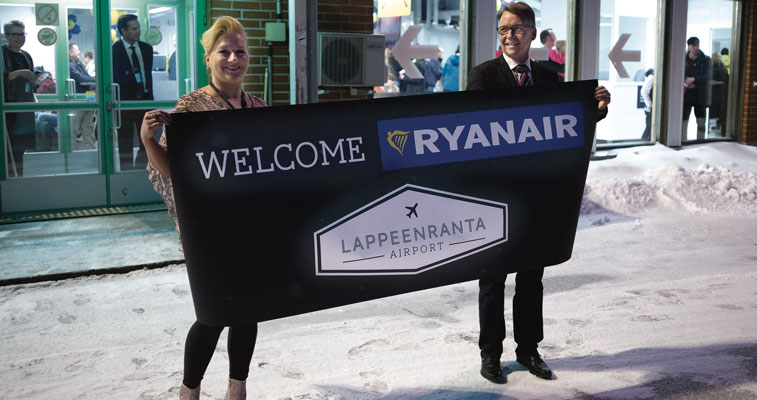 Lappeenranta Airport greeted the arrival of Ryanair’s inaugural service from Milan Bergamo on 28 March. Seen on hand ready to welcome the first flight with the welcome banner are Lappeenranta Airport CEO Eija Joro and Board Member Tom Christides. The carrier plans to launch a second route to the Finnish airport – Athens – in May. 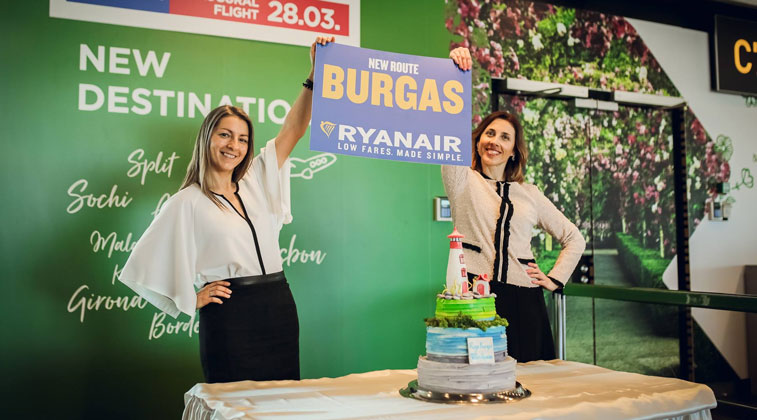 Ryanair added flights between Bourgas and Riga on 28 March, with the Latvian capital airport welcoming the new service with this splendid three-tiered seaside-themed cake. Posing with the calorific concoction are the airport’s Route Development Manager, Laura Audariņa, and Director of the Aviation Service and Business Development Department, Liene Freivalde. Ryanair will operate the 1,614-kilometre sector twice-weekly (Wednesdays and Saturdays). 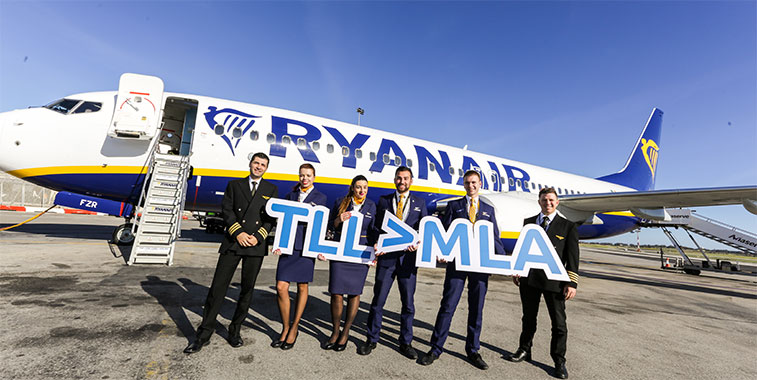 Ryanair used the last seven days to launch a further six routes from Malta, having started five the previous week. The Mediterranean airport was particularly pleased with the addition of Tallinn to its network, with the Ryanair cabin crew seen here promoting the fresh connection to the Estonian capital city. 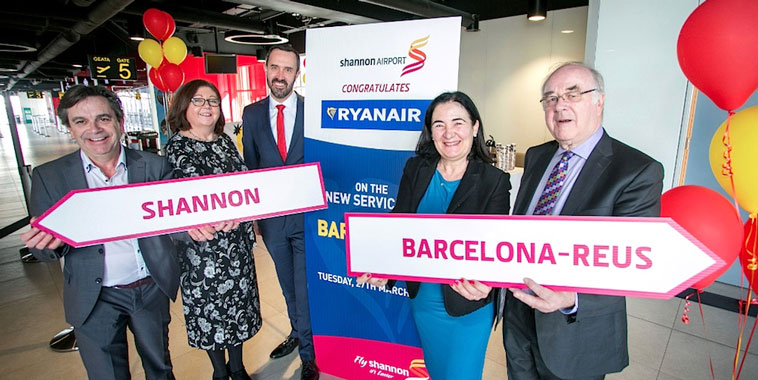 Ryanair commenced flights between Shannon and Reus on 27 March. The ULCC will operate the 1,492-kilometre sector twice-weekly (Tuesdays and Saturdays) facing no direct competition. With this launch, it means that Ryanair will operate seven Spanish routes from Shannon this summer. The airline’s expansion from the Irish airport does not stop here though, with Ryanair adding Bristol and Liverpool services from Shannon in May. 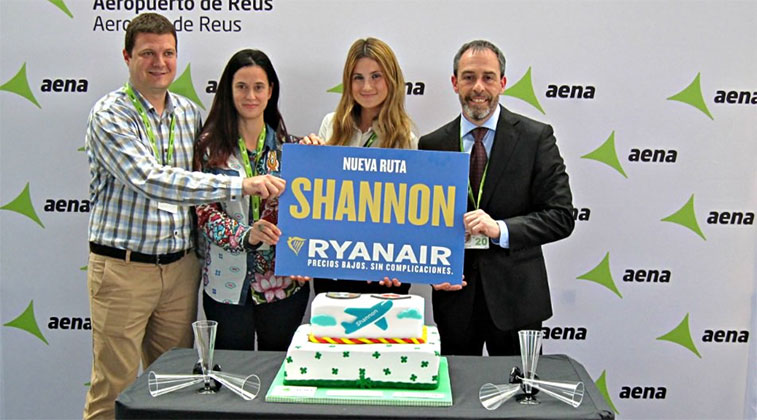 At the Spanish end of the same route, celebrations were also held at Reus too. According to current OAG schedules data, the Irish ULCC also offers a daily service from Dublin to the Spanish airport in addition to its new Shannon service. 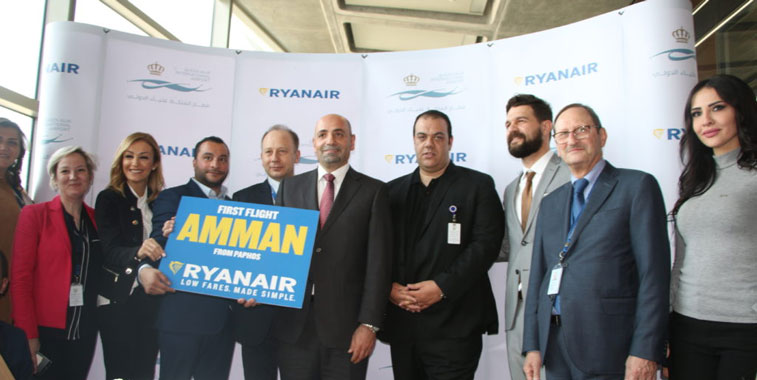 Ryanair introduced its second Middle Eastern market after Israel to its network this week, with Jordan joining the ULCC’s route map. The carrier inaugurated a four times weekly service from Paphos to Amman on 27 March, with the airline planning to add a further 13 routes to the nation towards the start of the W18/19 season. 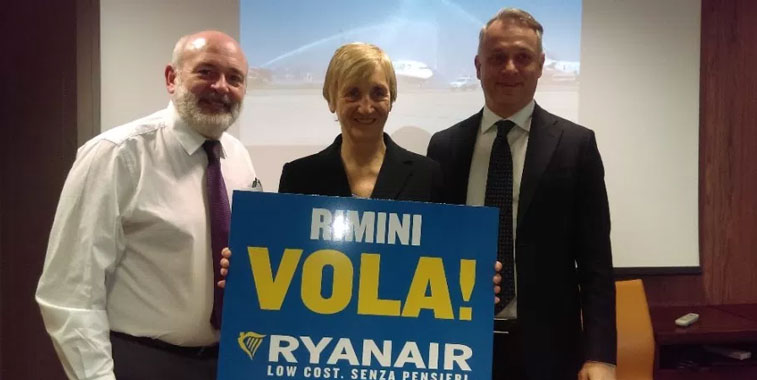 Ryanair celebrated its return to Rimini on 27 March, ending its six-year hiatus of flying to the Italian airport. The carrier added the Adriatic sea city to its London Stansted and Kaunas networks this week, while Warsaw Modlin flights began on 26 March. In total the carrier will be offering five departures from Rimini this summer. Seen at the launch of Stansted flights are: John Alborante, Sales & Marketing Manager Italy, Ryanair; Laura Fincato, President of AIRiminum (the company that runs Rimini Airport); and Leonardo Corbucci, CEO of AIRiminum. 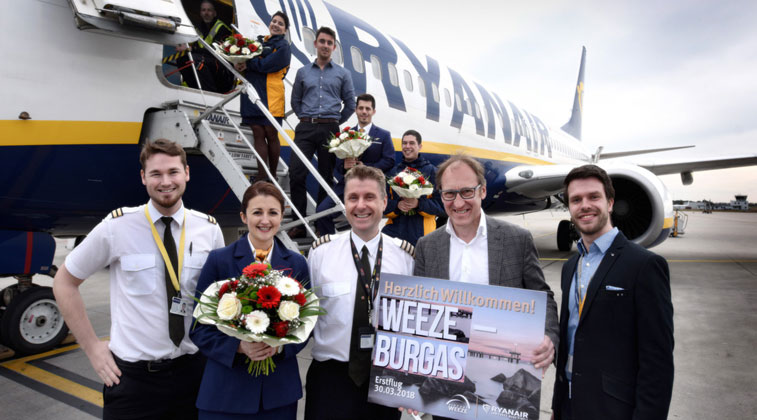 Ryanair added flights between Bourgas and Weeze on 30 March, a route that was celebrated at the German-end of the route. The ULCC will operate the 1,893-kilometre route twice-weekly (Mondays and Fridays). Seen at the launch along with the crew is Ludger van Bebber, MD of Weeze Airport (second right).