easyJet opens latest base in Bordeaux and toasts 10 million passengers easyJet opened its latest base at Bordeaux Airport this week. The French airport celebrated the occasion with a major celebration, with activities including a ribbon cutting, cake and dancing, while the airline also unveiled its Bordeaux-themed aircraft. Among those present to conduct the ribbon cutting, declaring the base open, were: Johan Lungren, CEO of easyJet; Pascal Personne, CEO of Bordeaux Airport; Stephan Delaux, Deputy Mayor of Bordeaux in Charge of Tourism; and Patrick Seguin, President of the Chamber of Commerce of Bordeaux. By the peak summer, easyJet will have three A320s stationed in Bordeaux, with this allowing the airline to open several new routes including Bastia, Catania, Faro, Heraklion, Ibiza, London Southend, Luxembourg, Rhodes and Tel Aviv. For more information on easyJet’s history at Bordeaux, take a look at anna.aero’s recent analysis of the carrier’s operation at the French airport. 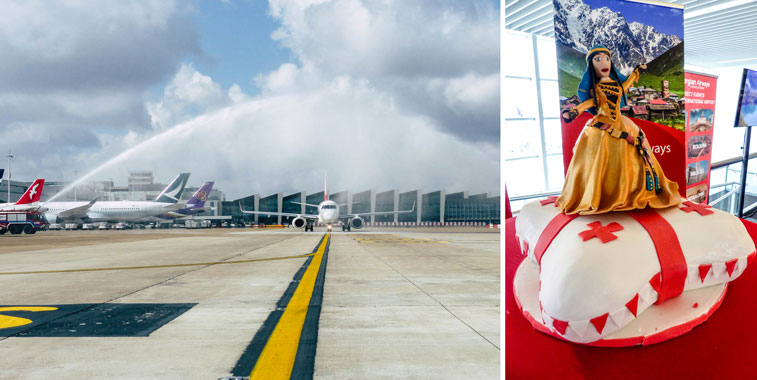 Brussels Airport welcomed the arrival of Georgian Airways on 29 March, with the airport producing a splendid water arch salute and baking a Georgia-themed cake to greet the airline. The carrier commenced flights between the two cities on 25 March, with it poised to operate the 3,227-kilometre route twice-weekly (Thursdays and Sundays) using E190s. Note in the background of the water arch image Cathay Pacific Airways’ A350 from Hong Kong, a route which also began on 25 March. Find out more information about the new route here. 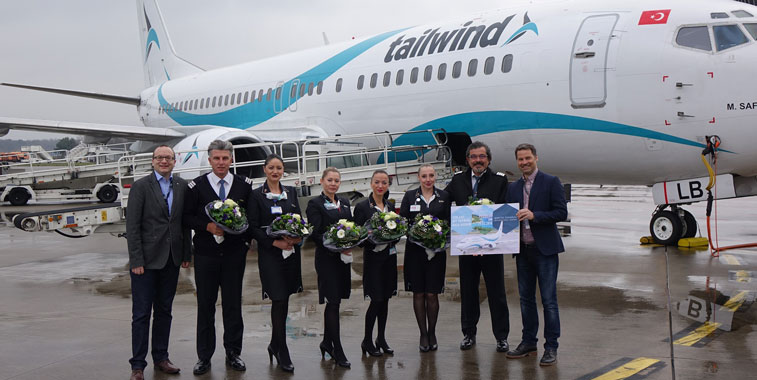 Tailwind commenced its first charter flight between Bodrum and Munster this week. Pictured welcoming the first flight crew to the German city are the airport’s Manager Aviation Marketing Mathias Richter and VP Marketing and Communications Andrés Heinemann. By peak summer Munster will have scheduled flights to six destinations in Turkey based on OAG schedules, including both Istanbul airports, Adana, Antalya, Izmir and Kayseri. Geneva Airport celebrated the arrival of Adria Airways and its new service form Ljubljana on 29 March, a route which began three days earlier on 26 March, confirmed by OAG and Flightradar24.com data. Cutting the ribbon at the route launch event in Geneva are Christian Schneider, CCO of Adria Airways and Yves-Daniel Viredaz, Head of Marketing & Business Development, Geneva Airport. The carrier will operate the 641-kilometre link between the two cities three times weekly using its CRJ 700s. 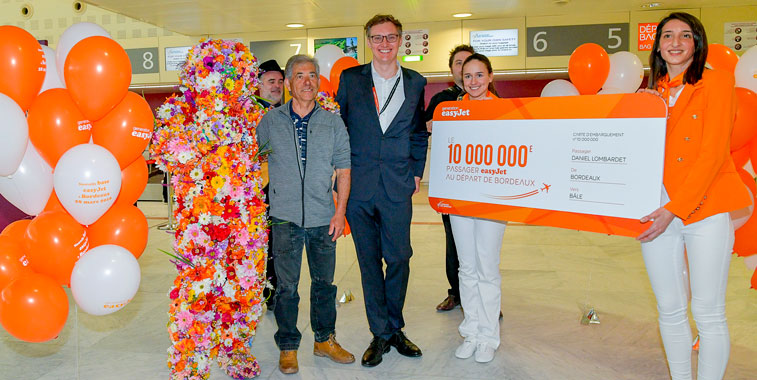 Along with opening its newest base in Bordeaux, easyJet on the same day reached the milestone of carrying 10 million passengers from the French airport, a market where the carrier has been present since 2006. Reginald Otten, easyJet’s CCO for France (centre) greeted the 10 millionth passenger as he checked in for his flight to Basel.