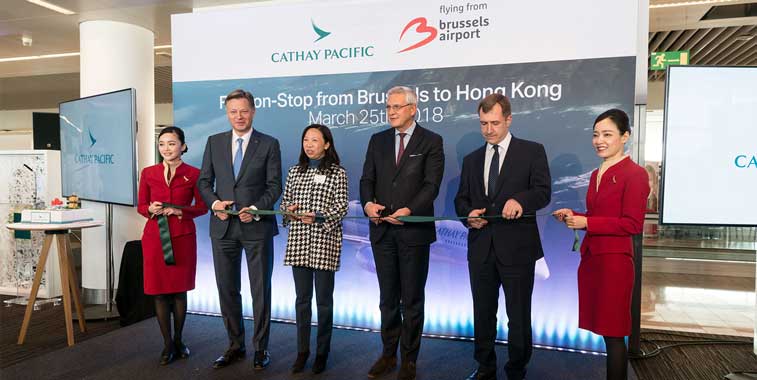 There were celebrations at Brussels Airport on 25 March to mark the arrival of the first Cathay Pacific Airways service from Hong Kong. The Asian operator will fly this new airport pair four times weekly and plans to introduce two more European nodes to its network during S18 in the form of Copenhagen and Dublin. Later in the year the carrier will also add new links from Hong Kong to Washington Dulles and Cape Town.

Cathay Pacific Airways is a founding member of the oneworld alliance. It is a full-service carrier headquarted in Hong Kong. ch-aviation records that the airline operates an all-wide-body fleet which includes A330-300s (37 active), A350-900s (21), 777-200s (5) and 777-300s (65), including 53 of the longer-range ER variants. The airline has further A350 variants on order. It also operates a dedicated freighter fleet consisting of a number of 747-400ERFs and 747-8Fs. Cathay Pacific has a fully-owned, full-service subsidiary called Cathay Dragon which is focused on intra-regional services in Asia Pacific, and particularly on serving destinations in mainland China. Since it is a separate operating entity with its own IATA code, Cathay Dragon is not a focus of this analysis.

There were 29.15 million seats available on Cathay Pacific services in 2017, up 13% from the 25.78 million on offer in 2008. Despite this increase, the past 10 years has seen inconsistent capacity trends and more recently, relatively stagnant growth. There was a slight contraction in seats around the time of the global recession in 2009, before a brief but strong growth spurt occurred. From 2009 to 2011 available capacity across Cathay Pacific’s network increased by 13%. The period from 2012 to 2014 witnessed three consecutive years of cuts. A return to growth in 2015 and 2016 was followed by a 1.8% reduction in seat numbers last year. The inconsistency in capacity growth means that, despite several year-on-year increases in recent times, the number of seats on offer on Cathay Pacific services in 2017 was only about 1.0% up on 2011 figures. The outlook is not so static when Cathay Dragon’s capacity is also included. From 2008 to 2017 the carrier’s available seat numbers increased by 40% leading to a combined growth in capacity for the Cathay Pacific Group (seat numbers for both carriers) of 21% over the same period. At group level, there was a combined 10% increase in available seats from 2011 to 2017. 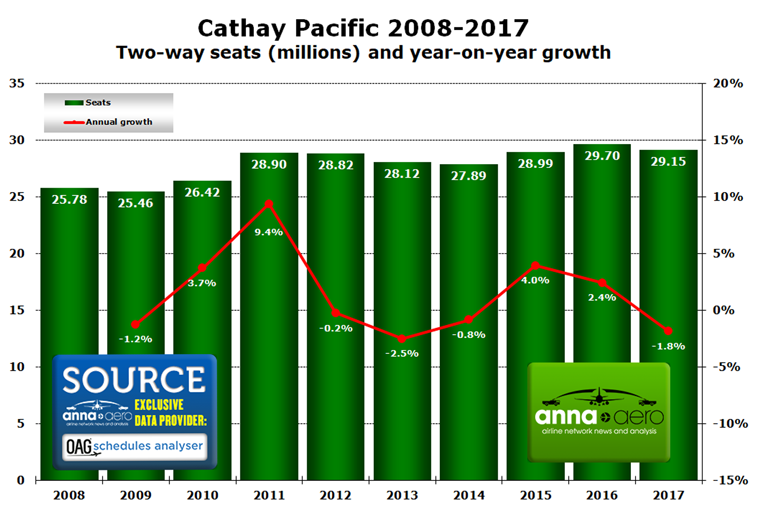 In 2008, there were, on average, 334 seats on each departing Cathay Pacific flight. The average capacity had increased to 342 seats by 2011, but has been on a downward trend ever since. In 2017 the average capacity on the carrier’s services had fallen to 300 seats. The phasing-out of the airline’s passenger-configured 747-400 fleet is a contributing factor to this. OAG schedules show that 747-400s provided 17% of the carrier’s capacity in 2011 before gradually being replaced by the latest generation of twin-engine types such as the 777-300 and A350-900. The airline’s last passenger carrying 747-400 service was operated in 2016.

Cathay Pacific’s Hong Kong hub dominates its network, with 13.6 million departing seats available from its main base in 2017. This was equivalent to 47% of the carrier’s departing seats last year. The airline’s entire network revolves around Hong Kong with all services directly linked to the Asian hub, or originating from or terminating there, as part of an indirect itinerary. OAG data shows that Cathay Pacific is scheduled to operate 1,880 departures from Hong Kong during the week commencing 10 April 2018. That’s an average of between 268 to 269 flights per day. An analysis of the carrier’s top 13 routes from it main hub, based on typical weekly frequencies in April 2018, reveals a strong representation from Asia Pacific destinations. In all, 12 of the 13 top-ranked routes link Hong Kong to other Asia Pacific airports.

The Taiwanese airport Taipei Taoyuan is by far the densest destination in terms of weekly flights, with 39 more rotations than the next best-served route. Taoyuan will see between 13 and 17 daily departures from Hong Kong during the week commencing 10 April. Taipei is the second largest airport in Cathay Pacific’s network after Hong Kong. As well as direct services that terminate in Taoyuan, Cathay Pacific also operates a number of fifth freedom flights via the Taiwanese airport to destinations including Seoul Incheon and three airports in Japan. In each case it also offers direct services to these destinations from Hong Kong. London Heathrow is the airline’s only top-ranked destination airport located outside of Asia Pacific. It will be served by four to five daily flights from Hong Kong during the week commencing 10 April. 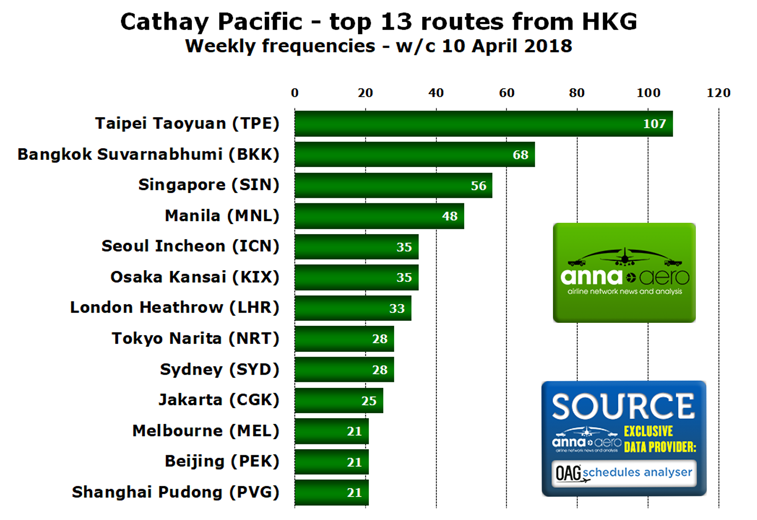 The top four destinations finished in exactly the same positions when ranked by annual one-way capacity from Hong Kong in 2017. In fact 12 of the top 13 airports were the same, although some of the respective places change when capacity is the leading unit of measure, due to the use of different aircraft on different routes, and some amendments to services in 2018 compared to last year. The only airport from the above table not to finish in the top 13 based on 2017 capacity was Melbourne. The only airport in the top 13 for capacity not to feature in the top 13 for weekly flights this April was Los Angeles. Taoyuan saw the most Cathay Pacific capacity from Hong Kong in 2017 with 1.8 million seats available, nearly twice as many as the second largest destination.

Nine of Cathay Pacific’s top 12 international markets are located in the Asia Pacific region. The largest of these are Taiwan and Japan, which accounted for 30% of the airline’s international one-way seats combined, last year. Taoyuan was the only Taiwanese airport served by the carrier, but there were six separate destinations in Japan with regular services, with Osaka Kansai and Tokyo Narita seeing the most capacity. The three non-Asia Pacific markets included two in North America and one in Europe. The US was the highest placed market outside of Asia Pacific finishing in third spot. In total Cathay Pacific served six airports in the US in 2017. The UK was the only European destination amongst the top-ranked international markets, with direct links now available between Hong Kong and Heathrow, London Gatwick and Manchester. 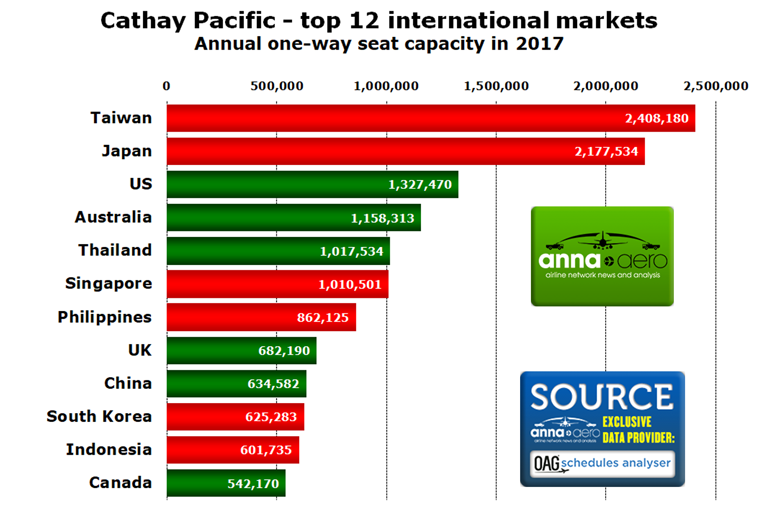 Half of the top 12 international markets witnessed increases in capacity in 2017 compared to the previous year. The largest increases came on services to the UK (11% capacity growth) and Canada (8.2%). The UK market was boosted by the first full year of operation on the Hong Kong-Gatwick service, which was introduced on 1 September 2016 and operates daily on A350-900s. Outside of the top 12 there was noticeable growth on services to New Zealand with capacity up 8.7% in 2017, following an increase in seat numbers to Auckland and the introduction of a new direct link to Christchurch last December. Six of the top 12 international country markets (highlighted in red) witnessed reductions in capacity from Cathay Pacific in 2017. Most of these were marginal, with largest cuts seen on services to South Korea (9.2% reduction) and Singapore (4.1%).

Cathay Pacific has cut a number of routes in recent years, ceasing operations from Hong Kong to Doha in 2016, and discontinuing flights to Riyadh and Kuala Lumpur in March and April 2017 respectively. However, anna.aero’s New Route Database shows that it has already added one new intercontinental connection in 2018, after the airline introduced a four-times weekly service from Hong Kong to Brussels on 25 March. The carrier will add two more European nodes to its network when it introduces flights from Hong Kong to Copenhagen and Dublin on 2 May and 2 June respectively. It will also add Washington Dulles services from 15 September and a Cape Town link from 2 November. 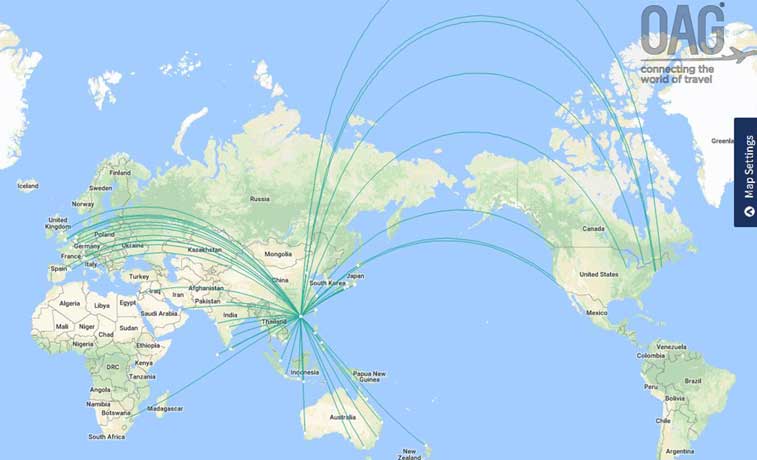 Cathay Pacific Airways’ route map for the week commencing 10 April emphasises the carrier’s cluster of connections in Asia Pacific, along with its long-haul sectors. The airline’s largest international market is Taiwan, with another eight of its largest country markets also located in Asia Pacific. Further afield, Cathay Pacific serves six airports in the US and an increasing number in Europe, including three in the UK.