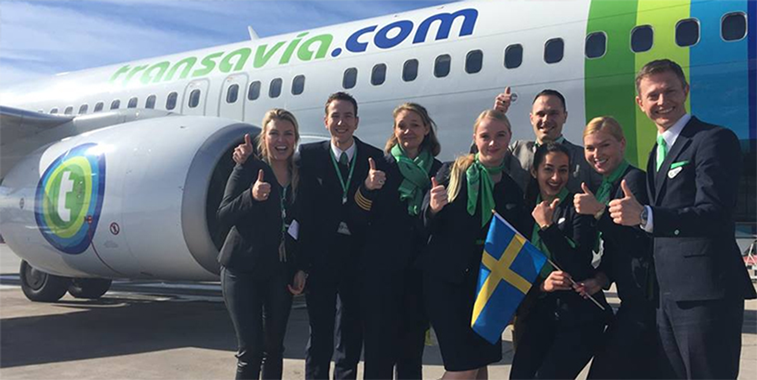 Eindhoven is the second largest airport in the Netherlands, handling 5.65 million passengers in 2017. Its network is dominated by three carriers; Ryanair, Transavia and Wizz Air. Transavia is the second largest airline at Eindhoven based on departing seats in 2017. The Dutch LCC launched four new services from the airport last year including this link to Stockholm Arlanda on 3 April.

Eindhoven is the second largest airport in the Netherlands behind only Amsterdam. Located five kilometres north-west of the city, the airport serves an area that is home to many technology and design companies. Its 3,000-metre long runway means that it is capable of accepting a wide range of aircraft types for commercial services. OAG data show that over the past 10 years, practically all of Eindhoven’s scheduled flights have been on international services.

In recent years, Eindhoven has experienced continuous, impressive year-on-year growth. In 2008, 1.63 million passengers passed through the terminal. By 2017 this had risen to 5.65 million, an increase of 247%. Since 2008 (which is as far back as the available data goes) the airport has only known positive traffic growth, with nine consecutive years of annual increases. Even in 2009, when many airports around the world suffered cuts related to the global recession, Eindhoven witnessed a 5.0% increase in passenger numbers. The largest annual increases since 2008 were experienced in 2010, 2011 and 2017 when traffic rose by 25%, 23% and 19% respectively. Last year’s growth was largely due to an in increase in capacity from Eindhoven’s three main carriers, Ryanair, Transavia and Wizz Air, through a combination of new routes and extra seats on some existing services. The airport exceeded five million passengers for the first time in 2017. Since 2008 it has experienced an average annual growth rate of 15%. If this average is maintained, Eindhoven will celebrate reaching the 6.0 million passenger milestone in 2018. 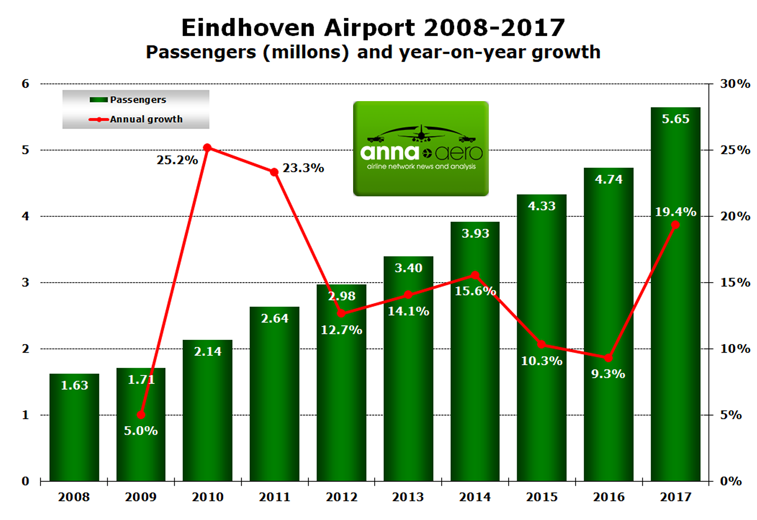 Eindhoven’s departure boards are dominated by LCCs and ULCCs. Since 2008, Ryanair, Transavia and Wizz Air have combined to account for 92% or more of the Dutch airport’s departing annual seats. Ryanair has been the largest carrier in each of the past 10 years. Transavia was the next largest operator at Eindhoven in 2008, before Wizz Air rose to second place from 2009 to 2012. The Dutch LCC reclaimed second position in 2013 and continues to occupy that ranking today. In 2008, Ryanair accounted for 77% of the departing capacity from Eindhoven, with Transavia and Wizz Air providing a further 9.7% and 7.6% of the available seats. All three carriers have increased their capacity from the Dutch destination since 2008. Ryanair more than doubled its available seats from about 675,000 in 2008 to more than 1.48 million last year. Despite this, it has seen its market share from Eindhoven reduced after Transavia and Wizz Air increased their seat offerings by 1,045% and 943% during the same period. The result was that Ryanair remained the leading carrier in 2017, but this time accounted for only 46% of the departing capacity, while Transavia and Wizz Air increased their respective market shares to 30% and 22%. Between them, the three carriers provided 98% of all seats from Eindhoven last year. All three of Eindhoven’s main carriers deployed significant extra capacity from the facility in 2017 compared to the previous year. Transavia increased its available departing seats by 19%, while Ryanair and Wizz Air introduced 18% and 15% more capacity respectively. Each operator introduced new routes from the Dutch airport in 2017. Ryanair led the way with six new services, followed by Transavia with four extra routes and Wizz Air which added one further connection. The other operators offering published capacity from Eindhoven in 2017 were Corendon Airlines and TUI Airlines Belgium. Several other carriers have offered services from Eindhoven over the past 10 years. One notable example is Vueling, which operated a link to Barcelona in 2016 and 2017, which has subsequently been discontinued.

There were scheduled services available to 26 international country markets from Eindhoven during 2017. The largest destination market was Spain, which accounted for around 930,000 departing seats, more than twice that available to second-placed Italy. The next largest markets were Poland, Portugal and the UK. Morocco and Israel were the only two non-European markets served. The largest single route based on departing seats in 2017 was London Stansted, which pipped Malaga for top spot. OAG schedules show that Ryanair currenty operates double-daily services from Eindhoven to its Stansted based. Six of the top 12 destinations are located in Spain, with Alicante, Barcelona, Ibiza, Valencia and Palma de Mallorca joining Malaga amongst the top-ranked routes. In total, Spanish destinations accounted for 48% of the departing seats available on the top 12 routes last year. 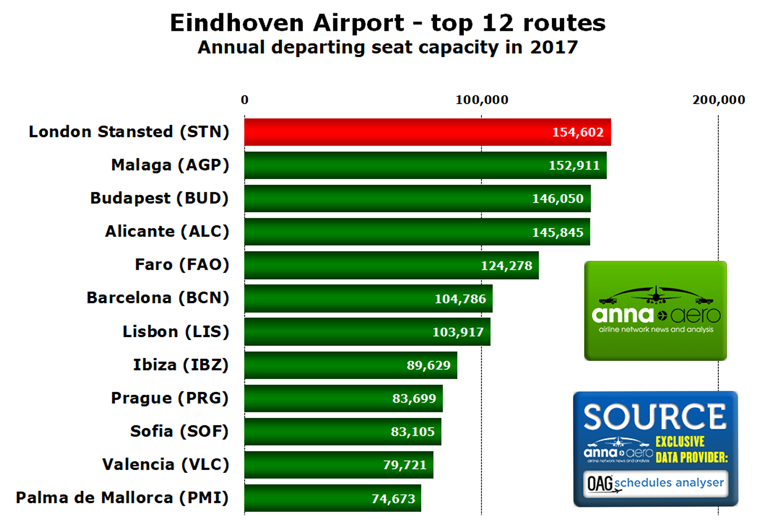 All but one of the top-ranked routes experienced an increase in departing capacity in 2017. The strongest growth was witnessed on services to Prague (90% year-on-year increase) and Valencia (60%). Both of these routes are served by Transavia and Ryanair. Capacity on each airport pair was boosted by the former airline adding more seats and the latter commencing operations on these links last year. Outside of the top 12, Bologna saw its seat numbers more than double in 2017. This destination has been served by Transavia since 2013, but capacity increased significantly when Ryanair began serving the sector last year. The only top-ranked route to experience a drop in capacity in 2017 was Stansted (highlighted in red), with seat numbers on the London link dropping by 5.0%. Ryanair slightly reduced its frequency on this route last year, removing a third-daily Sunday rotation during the summer season.

OAG schedules show that several routes have been dropped from Eindhoven in recent times. Transavia launched a service to Munich in February 2016, which was discontinued at the end of S17 after the airline decided to close its Bavarian base. Other routes that are no longer available include Trapani, which was operated by Ryanair for a number of years until the end of S17, and Brno which was served by Wizz Air from December 2011 until the end of S17. Route churn is inevitable to some extent over a 10-year period and anna.aero’s New Route database shows that at least two new destinations will be gracing Eindhoven’s departures boards in 2018. Wizz Air is due to introduce a new link from Iasi in April, while Transavia will add a summer service to Rijeka in Croatia in July. 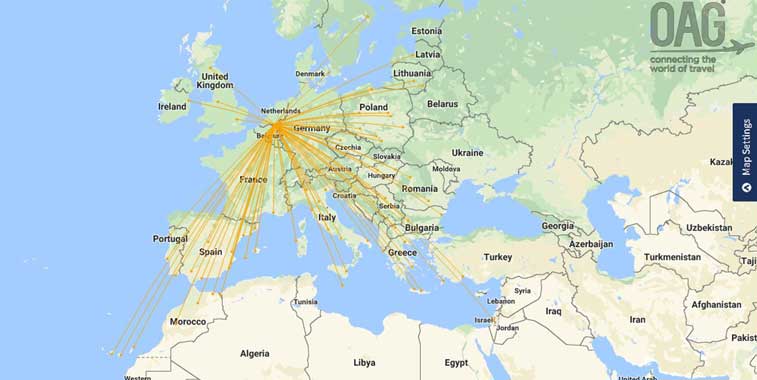 Eindhoven’s route map for the week commencing 10 April shows the majority of services link the Dutch airport to other European destinations. Spain was the largest destination market in terms of available capacity in 2017. The only non-European links last year were to Morocco and Israel.