Germany-Turkey market suffers slide in 2016 and 2017; return to growth on the horizon, Turkish Airlines is leading carrier 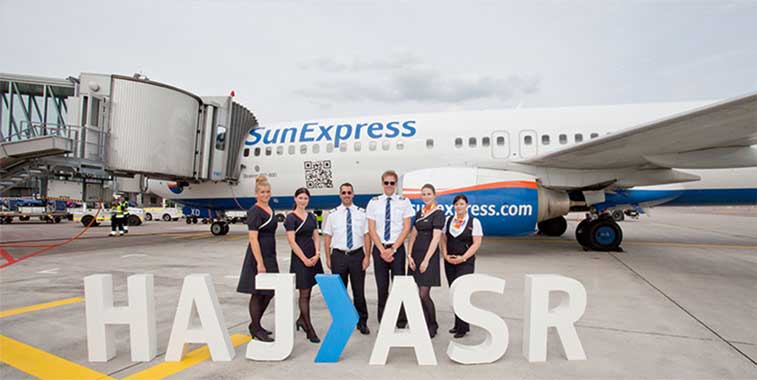 SunExpress provided the second-most seats of any airline in the Germany-Turkey market in 2017. The Turkish operator introduced a new weekly route between Hannover and Kayseri last year, which operated during S17. This route is not currently part of its schedules for 2018, but the airline does still serve a large number of airport pairs in this country market, including the connection between Trabzon and Frankfurt, which it has been advertising on its Facebook page.

There were 14.80 million seats available in the Germany-Turkey market in 2017, down 7.9% on 2016. Compared to seven other European country pairs anna.aero has analysed recently, the Germany-Turkey segment offered less capacity than the Germany-Spain (32.22 million two-way seats in 2017), UK-Germany (19.36 million) and Italy-Spain (15.92 million) markets. It did, however offer more seats than the France-Spain (14.33 million), France-Italy (13.07 million) and France-Germany (10.55 million) markets. Notably, there was considerably more capacity available between Germany and Turkey in 2017 than there was in the UK-Turkey market last year, with the latter country pair only supporting 5.29 million seats.

Seat numbers in the Germany-Turkey market grew from 6.97 million in 2008 to 14.80 million last year. This represents a 112% increase, with capacity more than doubling over the period in question. However, this does not tell the whole story. From 2008 (which is as far back as the available OAG data goes) until 2015 the country pair witnessed a strong period of growth with seven consecutive year-on-year increases in capacity. This particular period experienced average annual growth of 14%, including a peak 25% increase in 2010. The capacity available between Germany and Turkey consequently increased by 149% between 2008 and 2015, peaking at 17.37 million seats in the latter year. Since then however, the market has seen two straight years of cuts, with seat numbers falling by 15% from 2015 to 2017. This was most likely the result of a reduction in German tourist demand to Turkey, following a spate of terror attacks and a period of political uncertainty in the country. The UK-Turkey market also experienced capacity cuts, losing 19% of its available seats from 2015 to 2017. Like the UK-Turkey segment, the Germany-Turkey market seems destined to return to growth in 2018. OAG schedule data at the time of writing indicates that more than 15 million seats will be available between the two countries this year, a 1.7% increase on 2017 figures. Since some schedule changes and additions are likely to take place before the end of the year, the final growth figure could yet rise. 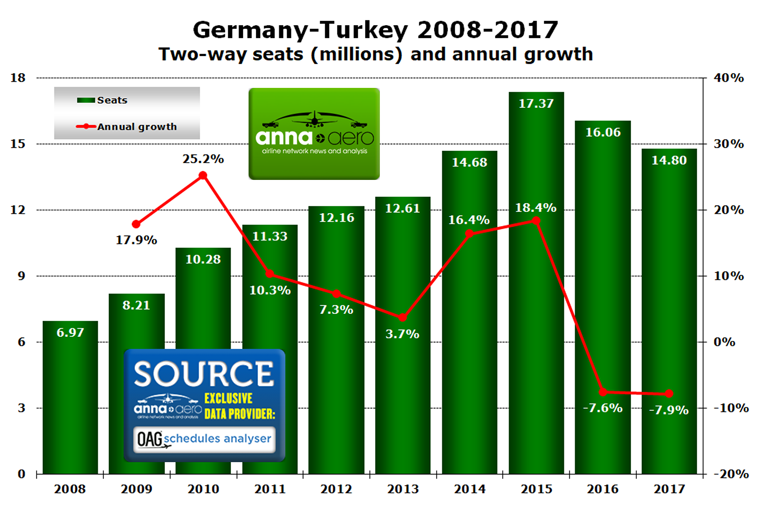 From 2008 to 2017 the average capacity on departing flights between Germany and Turkey increased from 169 seats to 185. Narrow-body aircraft are used for the vast majority of services and accounted for 99% of the available seats in the country pair in 2008. In recent years, larger narrow-body types like the A321 have been deployed to an increasing extent. In 2017, narrow-body aircraft provided 94% of the available capacity in the market, with wide-body types being used to operate the remaining flights. Turkish Airlines flew most of the wide-body services between the two countries in 2017, deploying its A330 fleet on certain routes, including links from Istanbul Atatürk to Düsseldorf and Frankfurt.

The top 12 airports in this country pair include eight in Germany and only four in Turkey. This analysis considers there to be four main hubs in the market; Frankfurt and Munich in Germany and Atatürk and Istanbul Sabiha Gökçen in Turkey. All four hubs made the top six for departing seats in 2017, with nine of the 12 largest airport pairs operating via one of these airports. Atatürk was the single largest origin point for services between Germany and Turkey last year. Turkish Airlines’ hub accounted for 18% of all departing seats in the market in 2017, with the three largest routes linking it to Düsseldorf, Frankfurt and Berlin Tegel. The highest ranked non-hub facilities were Antalya and Düsseldorf, which finished second and third respectively. 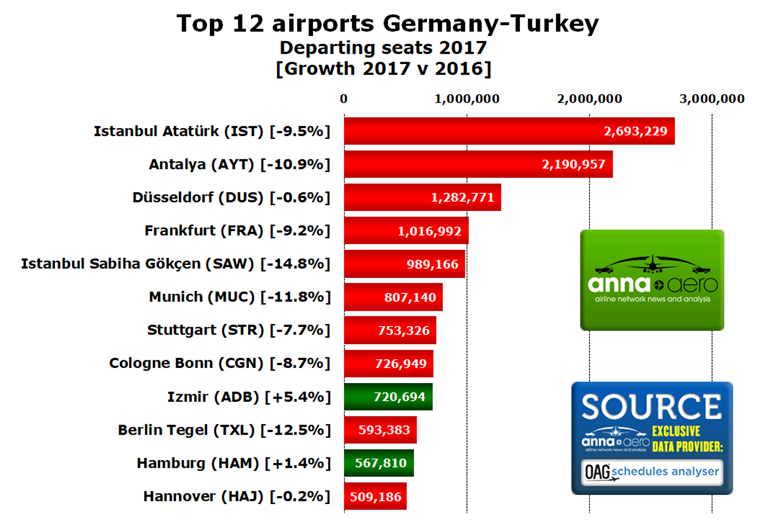 Ten of the top 12 airports (highlighted in red) experienced reductions in capacity on services between Germany and Turkey in 2017. The largest of these cuts were felt at Sabiha Gökçen (14.8% reduction in departing seats) and Munich (11.8% reduction). The largest single contributor to the loss of seats from both facilities was a reduction in capacity from Turkish Airlines. Izmir and Hamburg were the only top-ranked airports to enjoy an increase in seat numbers in this market pair in 2017. SunExpress boosted its capacity from both origin points last year. Hamburg also saw expansion from Atlasglobal.

Non-hub facilities have offered more departing seats than the four main hubs in the Germany-Turkey market over the past 10 years and the gap between them is continuing to grow. In 2008, the four hubs provided 47% of all capacity in this country pair. From 2008 to 2017 the seats available from the hubs increased by 68%, compared to a 152% growth rate from the other airports. This resulted in the four hubs’ market share dropping to 37% of departing seats in 2017. This trend could indicate a preference for point-to-point links, perhaps driven by a tendency towards leisure travel in this market. 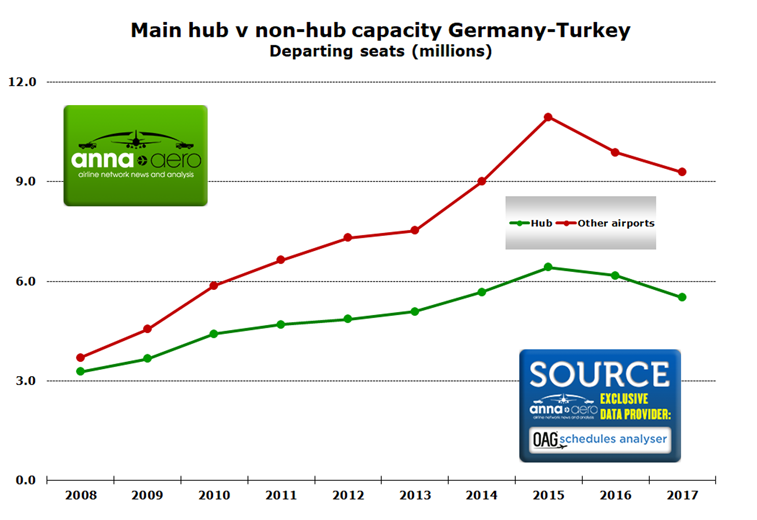 Turkish carriers dominated the airline rankings in this country pair last year, occupying the top three spots in the table based on available seats. Turkish Airlines, SunExpress and Pegasus Airlines accounted for 78% of all capacity in the market between them in 2017. In total, Turkish-based carriers made up six of the top 12 published airlines, while five were German and one was Danish. Turkish Airlines was the single largest operator providing more than one-third of the available seats on its own last year. The highest-ranked German operators were Condor and Lufthansa. Denmark-based FlexFlight makes the list as a published carrier, although, as it explains on its website, it is only the marketing and validating carrier. OAG data suggests that those seats sold under FlexFlight’s IATA code in this market in 2017 were actually flown by Turkish-based Corendon Airlines, which was the eighth largest published carrier in its own right. 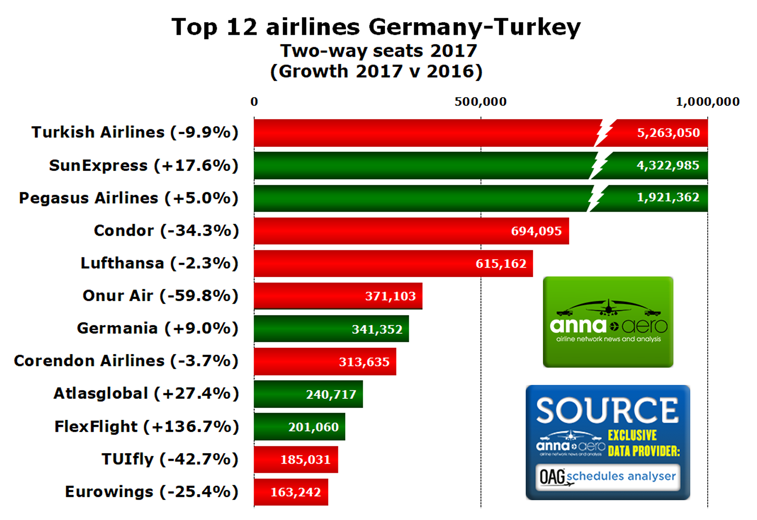 Despite the cuts taking place in the market, five of the top 12 published carriers increased their capacity between Germany and Turkey in 2017. The strongest growth came from FlexFlight which more than doubled its available seats compared to 2016. OAG data indicates that in both 2016 and 2017, the Danish firm’s flights were operated by Corendon Airlines. The next strongest growth came from Atlasglobal (27.4% increase in seats) and SunExpress (17.6%). The latter carrier introduced a number of new services in 2017 including a link between Kayseri and Cologne Bonn. Seven of the top-ranked carriers (highlighted in red) cut capacity in this country pair in 2017. The largest reductions came from leisure operators Onur Air (-59.8%), TUIfly (-42.7%) and Condor (-34.3%), which reinforces the notion that a fall in holiday traffic was central to the market’s decline since 2015. One carrier to disappear from the top of the charts in recent times is airberlin. The German LCC was the fourth largest operator in the market in 2012 accounting for 8.8% of all seats, but it reduced its presence in the following years and offered no capacity at all between the two countries in 2017, before ceasing operations last October.

The apparent return to growth in the Germany-Turkey market in 2018 is reinforced by a swathe of planned new airline services. anna.aero’s New Routes Database shows that airlines are scheduled to start 27 new services this year, the majority of which are due to launch during the summer season. This includes 10 new services from Germania and a further eight from SunExpress Germany. Only six of these new routes will involve one of the four main hubs. 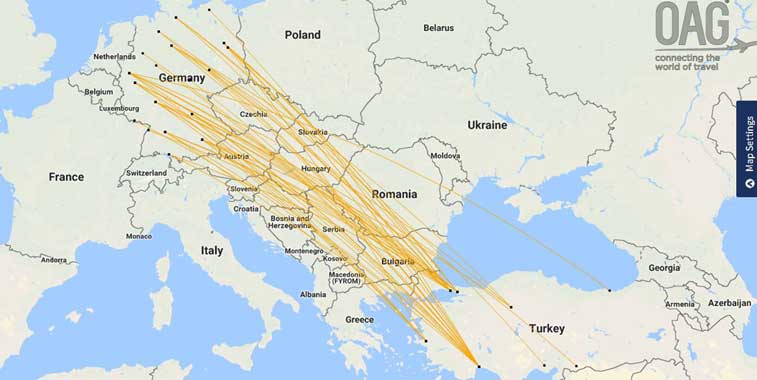 There were only four Turkish airports in the top 12 for departing seats in this country pair in 2017, although Istanbul Atatürk was the largest single origin point in the market. This analysis considers there to be four main hubs in the Germany-Turkey market; Frankfurt, Munich and Atatürk and Sabiha Gökçen Airports in Istanbul. These four hubs only accounted for 37% of the capacity between the two countries last year, indicating a preference for point-to-point links.