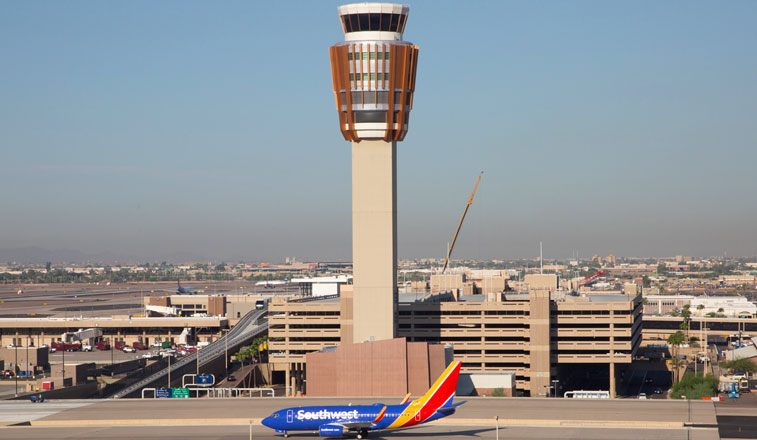 It’s not just about how big you are, but how you perform with what you have! Southwest Airlines may only be the second largest airline at Phoenix, dwarfed by the mighty American Airlines, but it’s performance in 2017 certainly outshone its oneworld rival. Southwest saw its traffic grow by 3.2% from the Arizona hub last year, comparing against an airport average of 1.2%. It’s result for 2017 certainly passes that of American, with it showing a 1.8% drop in passengers.

Southwest Airlines is the second largest carrier at Phoenix, sitting behind American Airlines, with the latter taking the lead since its merger with US Airways. While Southwest’s operation is large at the Arizona hub, currently transporting well over 14 million passengers, American carried 5.47 million more travellers than the LCC in 2017. In terms of Southwest’s operation, Phoenix was the carrier’s sixth largest hub in 2017 with regards to departing seat capacity (9.17 million annual one-way seats), sitting ahead of Houston Hobby (8.26 million), but behind Dallas Love Field (9.26 million). The carrier started serving the Arizona airport in 1982, some 11 years after its launch in 1971.

Closing in on the 15 million barrier

Southwest transported just shy of 14.88 million passengers to/from Phoenix in 2017, an increase of 3.1% versus its result of 2016 when it carried 14.43 million. During the time frame analysed, the airline has only encountered three years of traffic decline at Phoenix (highlighted in light green), with two of them, 2008 and 2009, coming just after the global recession. Overall Southwest flew 65% (or 5.86 million) more passengers from Phoenix in 2017 than it did in 2002. 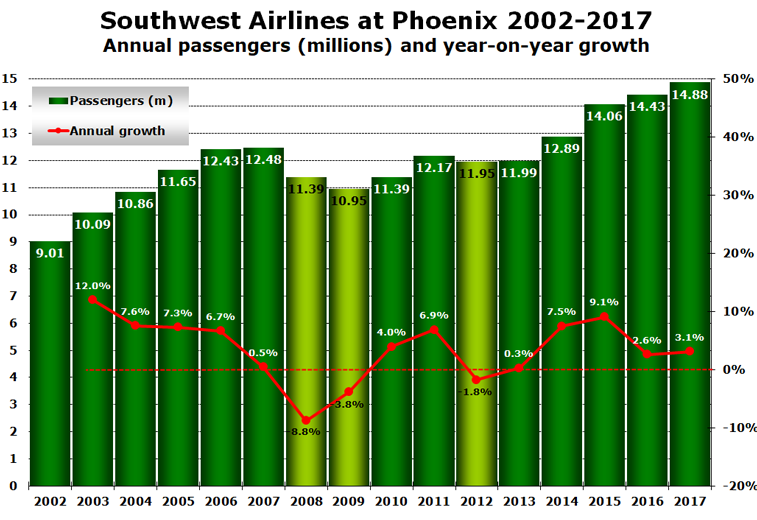 In 2017 43.92 million passengers passed through Phoenix, meaning that 34% of the airport’s traffic flew on a Southwest aircraft. The overall throughput growth for Phoenix last year was 1.2%, meaning that Southwest’s achievement of a 3.1% rise in passenger numbers was over twice as large as the airport’s result. Interestingly, American, the airport’s largest airline which transported just shy of 20.35 million passengers in 2017, posted a 1.8% drop in traffic, having flown 20.72 million from the hub in 2016.

Southwest will be adding over 292,000 additional seats to its S18 programme at Phoenix, with this representing roughly 11 additional departures a week from the airport this summer. Despite this healthy growth in capacity, just one route is being added, a weekly (Saturdays) link to New York LaGuardia. This will be the first route launch from the airline from Phoenix in two years, with the last inauguration having been on 12 April 2016 to Wichita. However it should be noted that LaGuardia services will only operate on a seasonal basis until 2 June. The table below shows the top 15 routes for Southwest from Phoenix, with those highlighted in light green showing frequency increases, while those in red have seen a reduction in weekly flights versus the same week in S17. 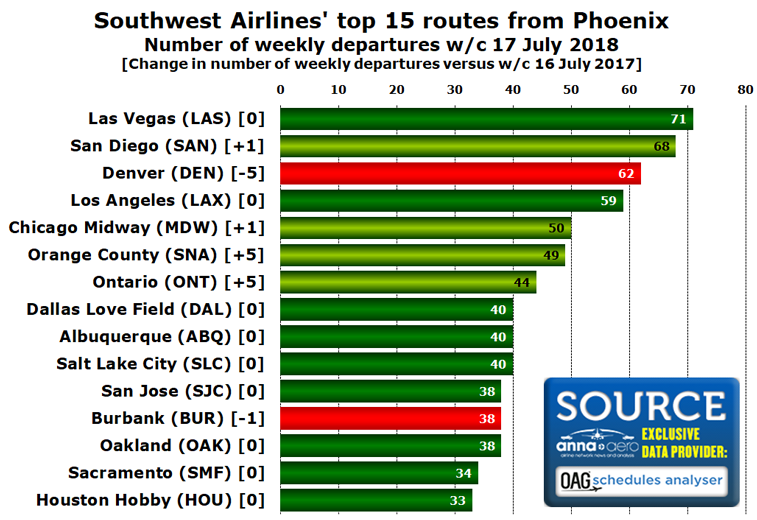 Only two of the top 15 routes have seen a drop in weekly rotations this upcoming summer, namely Denver and Burbank. Of the 50 routes being flown by the carrier in S18 from Phoenix, and with all of them seeing at least seven weekly flights, only four have seen capacity cuts. San Francisco (one less weekly departure) and Philadelphia (five less), along with the Denver and Burbank, are the other two routes seeing cuts in the week that anna.aero has chosen to analyse. No routes have been dropped during this time. At the other end of the spectrum, along with the four routes in the top 15 to see extra weekly flights added, a further seven city pairs outside of this ranking have welcomed more frequencies, meaning that since last summer, 11 destinations (22% of routes with Southwest from Phoenix) have experienced expanded flight schedules. The other destinations which have seen additional weekly flights are Nashville, St. Louis, Oklahoma City, Columbus, Orlando, New Orleans and Raleigh-Durham. Overall the top 15 routes for Southwest from Phoenix account for 59% of its weekly departures this summer, equal to the share they garnered in S17.

Looking at OAG schedules for the 17 July, it indicates that Southwest must have at least 10 night-stopping aircraft, with there being 10 arrivals between 11:00 and 00:59, but zero departures. The carrier’s busiest time of day for departures is the hour between 14:00 and 14:59, with 15 aircraft leaving Phoenix during this prime hour. The busiest hour for arrivals is between 10:00 and 10:59, when 16 Southwest aircraft will touchdown. According to the carrier’s online fact sheet, it currently occupies 24 gates at the airport. 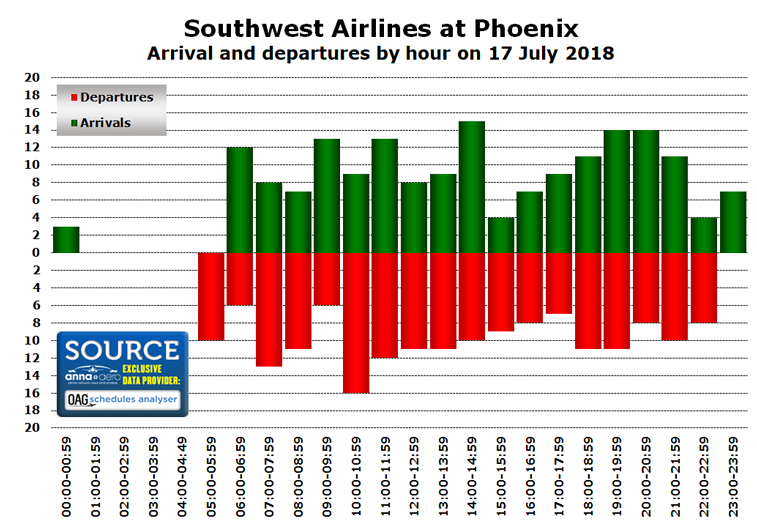 Based on the airline’s schedule for the 17 July, on average (across the 24-hour period) a Southwest aircraft lands or takes off from Phoenix ever four minutes. This drops to two minutes and 25 seconds during the peak hour between 14:00 and 14:59 when Southwest has 25 aircraft movements. Overall the airline has 356 movements taking place on the day analysed. 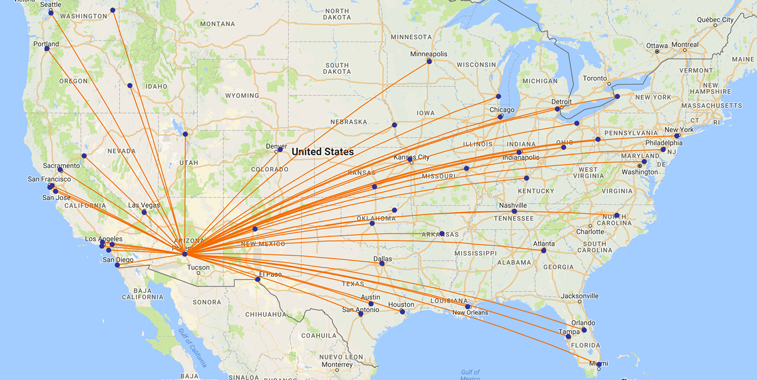 Southwest Airlines will fly to 50 destinations from Phoenix this summer, the same total that it operated from the airport in S17. The carrier will add a weekly (Saturdays) service to New York LaGuardia on 14 April, but this will only be flown until 2 June. Despite not adding a new route since April 2016 (Wichita), the carrier has grown passenger numbers from Phoenix from 14.06 million in 2015 to 14.88 million last year, a result of extra flights being added to existing routes.