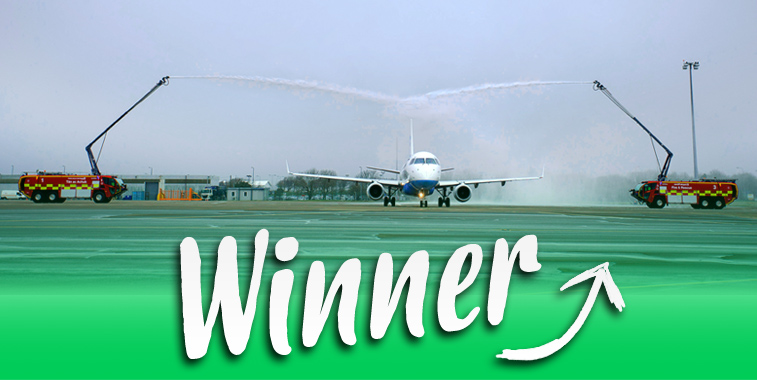 Is this a sign of great FTWAs to come?? Cardiff Airport is expecting one of the most significant developments in its route network in the next couple of months, when Qatar Airways starts flying to the Welsh capital city. With a win in Part II of the Arch of Triumph competition under its belt, Cardiff is surely primed to win again soon when the MEB3 carrier arrives.

Part II of the Arch of Triumph public vote was closed at 17:00 yesterday. Having secured 43% of the votes, Cardiff Airport lifts the second reader-decided S18 trophy. Its nearest adversary was Lviv Airport, which managed a tally of just 11% in a one-horse race similar to the previous week in Part I. The UK airport shared this week’s public vote awards with Cologne Bonn Airport which was victorious in Part II of the Cake of the Week competition.

The public vote for the best Arch of Triumph returns in October/November, when the anna.aero reader will again get the opportunity to determine the weekly winners. N.B. The airport names which are underlined are the FTWA creators in question. 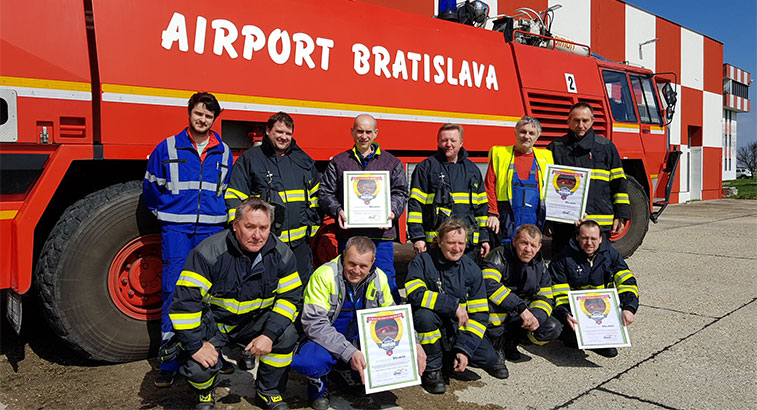 Bratislava Airport was so happy with its victory – it won Part I of the public vote for the Arch of Triumph – it printed out the certificate four times! The Slovakian airport’s firefighters who made the water arch, and airport lightning service team who created a nice red colour for the arch, are pictured here with the latest adornments to the crew rest area walls (top row): Ondrej Ferjanc; Pavol Jasko; Milan Gazdik; Jan Schwarz; Jozef Masar and Frantisek Bencurik. The bottom row were: Miroslav Graus; Tibor Matus; Jozef Sestak; Alojz Tomasovic; and Ladislav Nedelka.

Back to normal business this week, as the anna.aero judges return to the roles that they hold for 48 weeks of the year – evaluating and scoring the FTWA entries received from around the world over the last seven days. With 58 entries for the public votes over the last two weeks, this year’s tally is seven higher than that achieved in S17, and considerably better than the 35 and 24 received at the same time in 2016 and 2015. With 42 out of 58 entries (72%), Europe provided the lion’s share of FTWAs entered over the past two weeks, down slightly on the 75% that the region provided in 2017. Keep Monitoring!! 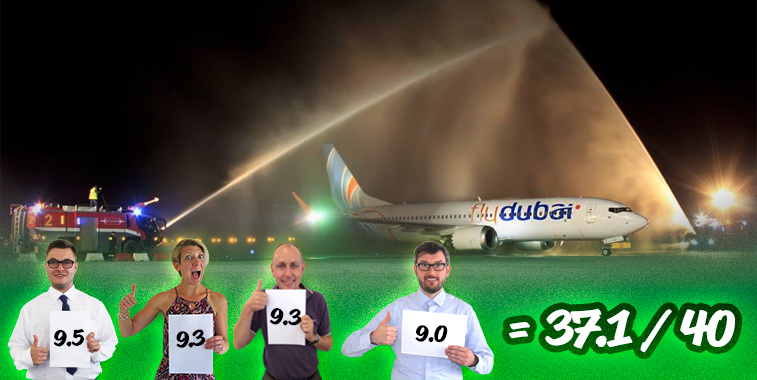 This FTWA makes the most of the night sky…

Judges’ comments: A bit like at Bratislava above, which won Part I of the bi-annual Arch of Triumph public vote, there seems to have been some well co-ordinated route launch planning here in Krakow between the airport’s marketing department, its firefighters and its airfield lighting department. The result is this staggering FTWA…and a worthy winner this week…and it also tops the overall leader board… 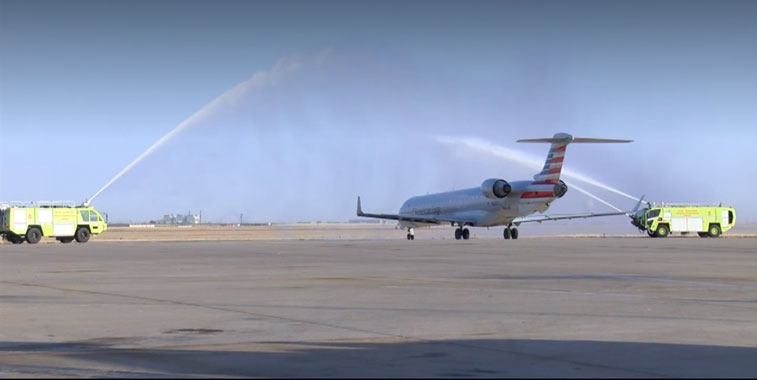 Is this the FTWA to Amarillo?

Judges’ comments: The anna.aero judges don’t know much about Amarillo, and whenever the Texan city is mentioned they all burst into song, trying to emulate the dulcet tones of Tony Christie who sang the 70s hit (Is this the way to) Amarillo, which was written by Neil Sedaka and Howard Greenfield. The question is, what would sweet Marie (who according to the song’s lyrics is apparently waiting for Christie in Amarillo) think of this FTWA?? 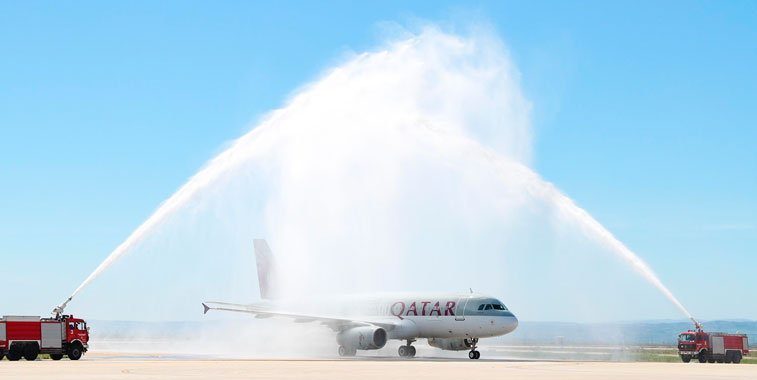 A bit less mist on this FTWA would have been preferable…but still Turkish delightful!

Judges’ comments: Now for today’s geography lesson, for those of you just as poor as the anna.aero judges in terms of your knowledge of the location of Turkish cities. Hatay is a southern Turkish province on the Mediterranean coast, bordered by Syria to the south and the east. The cosmopolitan capital, Antakya, along with city of Iskenderun, is served by Hatay Airport, which was opened in December 2007 in what used to be the center of the now drained Lake Amik. 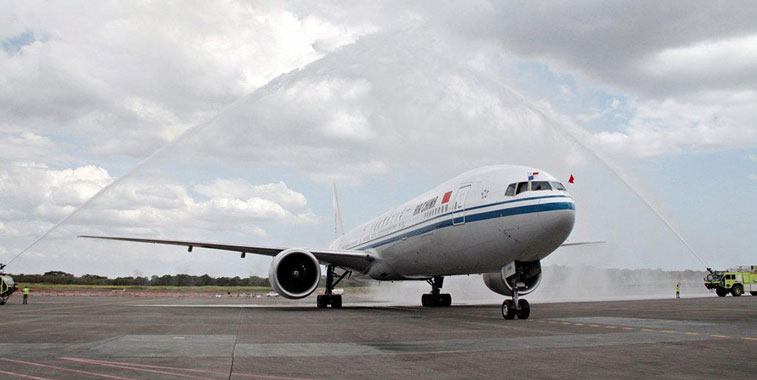 Judges’ comments: Although the flight from Beijing to Panama City stops in Houston en route to South America…reducing the sector length from the Texan city to Panama down to just 2,850 kilometres…the overall distance on the same aircraft from China is a whopping 14,429 kilometres. So its no wonder that the crew needed to open the cockpit windows…especially if many of the passengers had come all the way from Beijing to Panama City (phew!!). 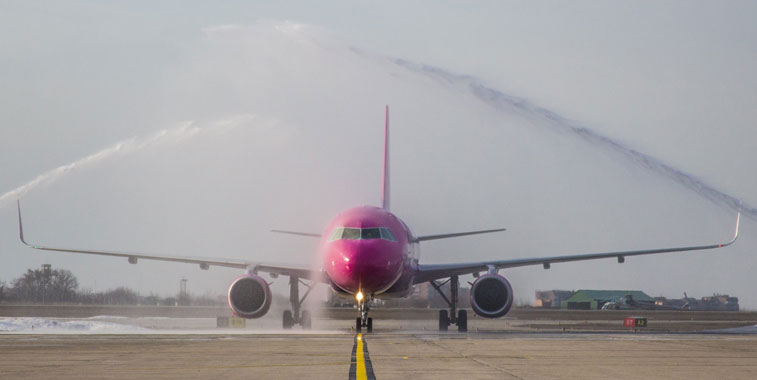 Judges’ comments: While you cannot fail to be impressed by the use of coloured dye (at least in the right-hand water jet) here in Ukraine, the fact that some key elements of a well ordered FTWA are missing – like the two tenders being in the picture – has dragged down the score attained by Kharkiv’s finest. The gap in the middle of the arch doesn’t help either… 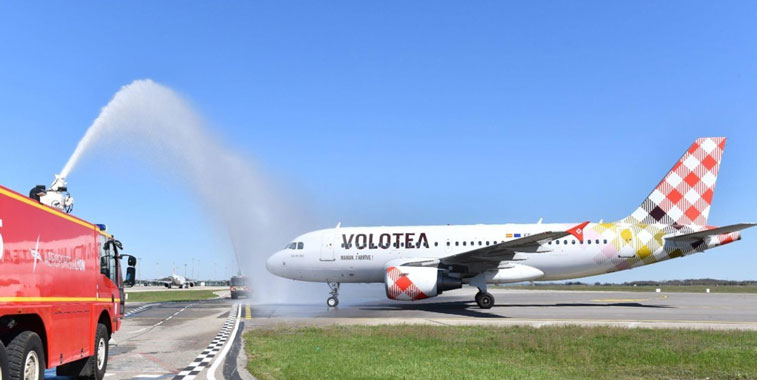 The best part of this FTWA….the handsome Volotea livery…

Judges’ comments: Volotea has started three new routes from Lyon this week, as the French airport becomes the LCC’s newest node on its network. So with this momentous route development news you would think that all the stops will have been pulled out to make this an FTWA to be proud of. Instead we have two water jets that look a bit limp…resulting in similarly limp scoring from the anna.aero judges. 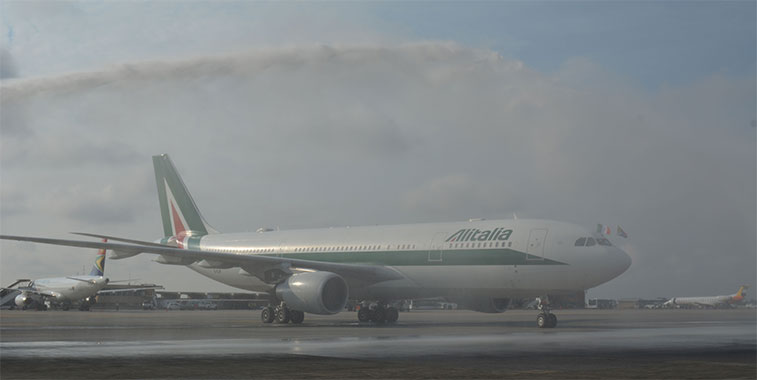 Judges’ comments: 16 years they have waited to get Alitalia back into South Africa…long enough surely to practice the perfect FTWA for when the SkyTeam airline returns after such a long hiatus. Looking at this water arch, maybe they should have waited another year or two to come back… 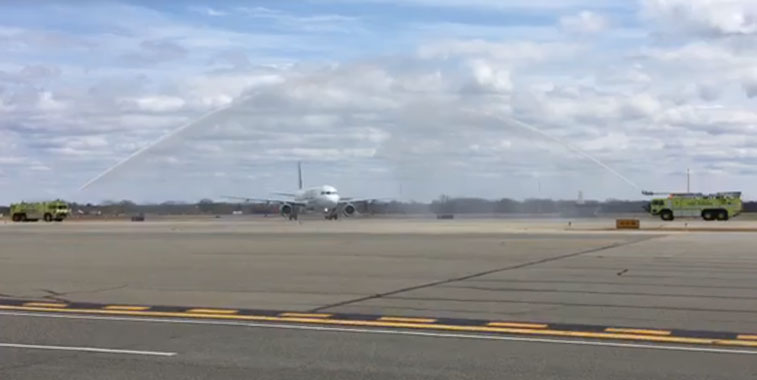 The first FTWA from this part of Rhode Island this year…

Judges’ comments: Clearly Providence likes a Frontier Airlines or international route launch…as the US airport has provided us with four water arches since the inception of this competition. Its first two were for new international sectors in S16 – namely the arrival of TACV and Condor – and its last was in 2017 when Frontier started its Denver operation. The FTWA scored 32.9 and was victorious back in August. As a result it finished 29th from the 45 weekly winners last year…although it will have to settle for 12th spot out of 14 entries this week… 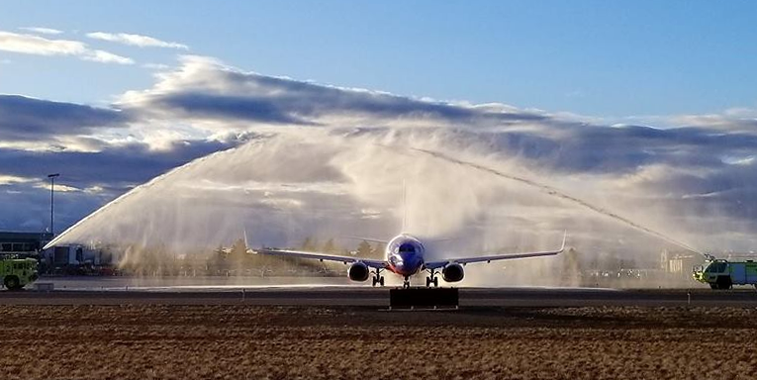 Is that board in front of the aircraft telling it which way to turn for the best FTWA?

Judges’ comments: Last August Spokane won its weekly competition with a score of 34.4, again for a Southwest Airlines new route. That winning score would have only gained the US airport joint fourth spot this week. As it is, this time out with a tally of 33.3, it slides into sixth spot in what is a very competitive week of this year’s Arch of Triumph battle… 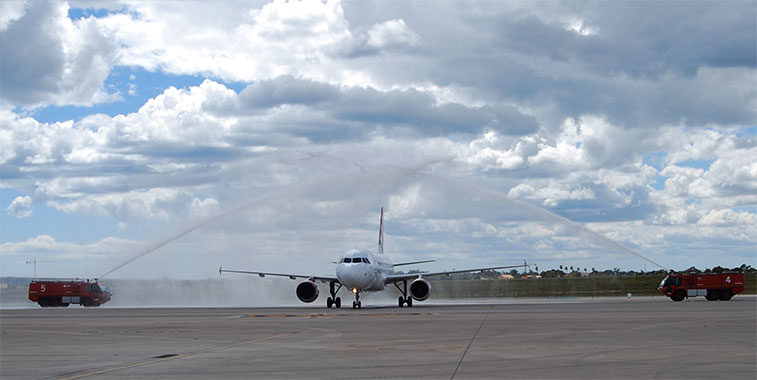 Judges’ comments: In the first week of the public votes to determine the S18 Part I winner, Alicante sent in two submissions and both received just three votes each. For the last seven days it has a single entry in Part II of the competition and seems to have done much better…as it finished ninth, with five votes this time….a fair distance behind the winner Cardiff…but an improvement all the same… 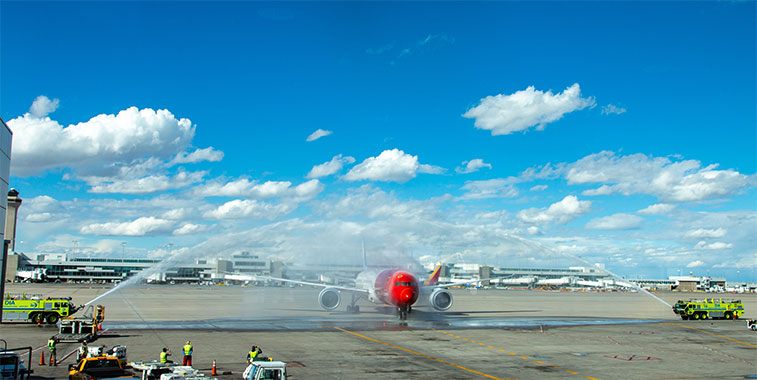 Judges’ comments: There is quite a bit of apron clutter in this picture from Colorado, not to mention the five members of the ground crew which seem to be filming the FTWA from various vantage points. We do applaud the one ramp guy, who arms behind his back (to the left of the cone), has obviously seen all this before and doesn’t need to film it again… 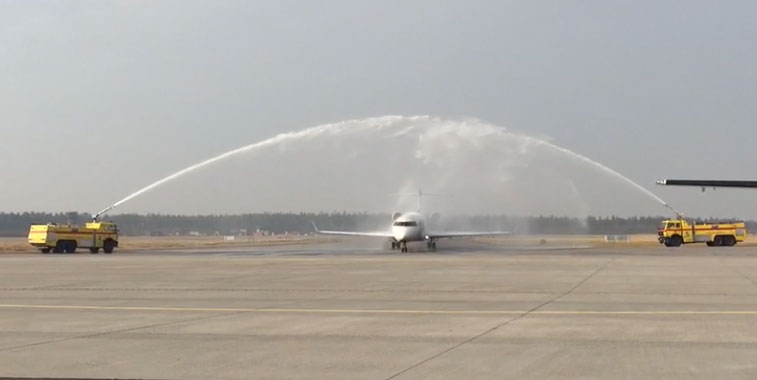 The first of three FTWAs from Denmark…

Judges’ comments: So excited were the airline relations team at Aarhus Airport this week because of its new based SAS CRJ 900 starting four new routes for them, that the Danish regional airport decided to get the fire trucks out not once, not twice, but three times!! If there were points awarded for marketing effort then Aarhus would be scoring highly!! 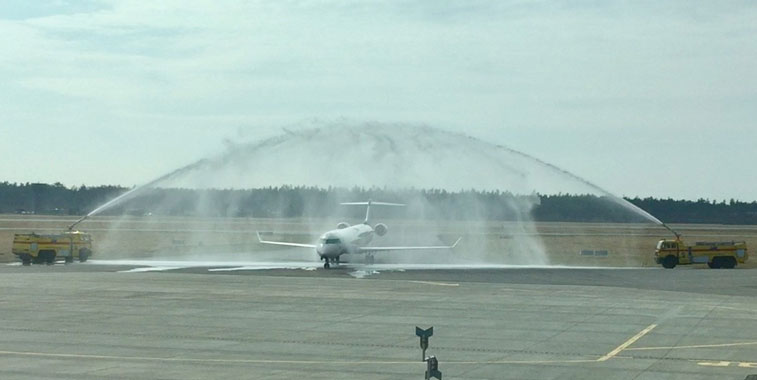 This is definitely the pick of the bunch…

Judges’ comments: Having got their eye in during the morning on the first flight back to Aarhus from Oslo (FTWA above), by 1330 when the second new service of the day returned to Denmark from Munich, the airport’s firefighters have evidently upped their game…as this is the best arch of the three that the anna.aero judges received from the Danish airport. Looks like the same two tenders were used too. 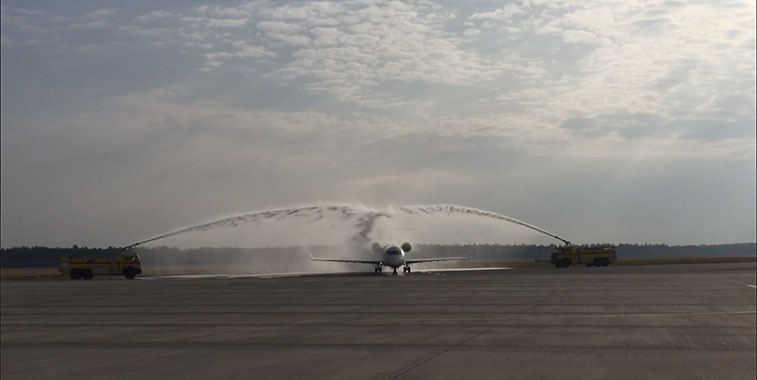 Judges’ comments: Its now 1740 in Aarhus. Perhaps there has been a shift change at the fire station, or maybe the original crew are just feeling a bit jaded after already delivering two FTWAs earlier in the day. Whatever happened, the resulting arch is a bit flat…more of a pancake than a pair of leaping dolphins. Despite the standard slipping after a long day…fire helmets off to congratulate the efforts undertaken by all in Aarhus…and for sending us the pictures!