Hamburg-Toronto is “Skyscanner Unserved Route of the Week” with 73,000 searches; Eurowings’ entry into Canadian market?? 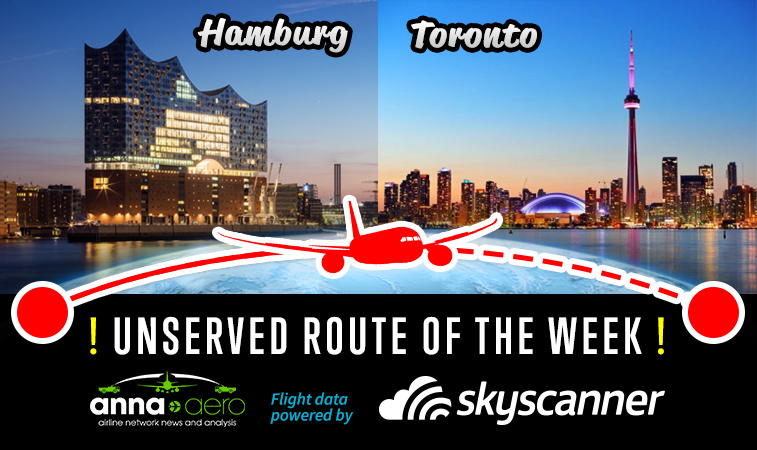 With nearly 73,000 searches in the past 12 months, a potential city pair from Hamburg to Toronto has been identified as this week’s “Skyscanner-anna.aero Unserved Route of the Week” – a powerful analysis based on aspirational data captured from the Skyscanner.net flight comparison site used by +60 million unique visitors per month. “Toronto is one of the top long-haul destination for northern Germans,” says Jörgen Kearsley, GM Aviation Marketing, Hamburg Airport. “Two nationwide Canadian tour operators are based in Hamburg, and they are looking for a non-stop service to Canada, especially Toronto.” 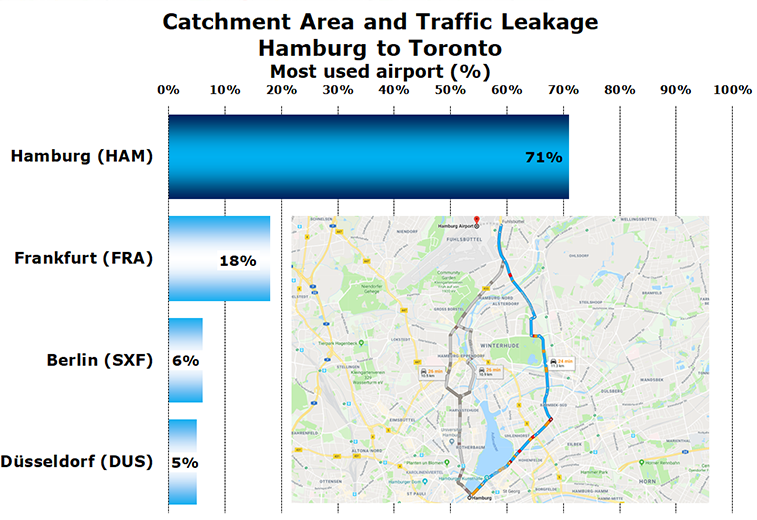 Matt Williamson Skyscanner’s Commercial Executive says: “Hamburg serves 71% of the catchment (50 km around the airport) going to Toronto. With a better service, such as a non-stop operation, the traffic could grow by 42%.”

anna.aero encourages Eurowings or Condor to consider this route

Skyscanner demand on this week’s unserved route shows a preference towards the Hamburg end of the city pair, with a 77/23 split, so on this basis we looked at potential carriers at the German origin first. According to OAG schedules for the week commencing 6 April, the largest carrier at Hamburg is Eurowings (29% share of weekly seats). The airline’s route network from its third biggest operation presently consists of 34 destinations, all of which are to points in Europe. The airline’s low-cost, long-haul (LCLH) services are currently concentrated on Cologne Bonn, and are scheduled to move to Düsseldorf later this year. While Toronto does not presently feature in the carrier’s route portfolio, or indeed any Canadian city, it would certainly seem to fit the Eurowings LCLH business strategy of serving sectors with high-leisure components. It is important to remember that its choice of city pairs may well be guided by its parent Lufthansa. However, as Hamburg is around 340 kilometres north-east of Düsseldorf, perhaps Eurowings would consider these two airports to be far enough apart to enable both to have LCLH routes in the future – hopefully including Toronto.

Behind Eurowings at Hamburg is Lufthansa (19% share of weekly seats). The #2 carrier presently offers just two routes from the North German airport, a 117 and a 104 times weekly operation to its Frankfurt and Munich hubs, so it should be viewed unlikely that it would consider a link to Toronto at this stage. The Star Alliance carrier also currently offers a daily service to the Canadian city from both of its hubs, so it may well be reluctant to start a new service which could remove any valuable feed.

In sixth spot at Germany’s fifth busiest airport is Condor (Ryanair in third, 9.7% share; easyJet in fourth, 4.1%; and SWISS in fifth, 3.4% share have all been ruled out of this analysis). The leisure carrier is presently only offering short-haul points in Africa and Europe this year from Hamburg, but it does have a robust presence in the Canadian market which could be leveraged from the German home of Airbus. Although all served from its biggest base at Frankfurt, it will be offering flights to Whitehorse (weekly), Calgary (three times weekly), Halifax (four times weekly), as well as Vancouver and Toronto (both five times weekly) in S18. On this basis, Condor is in an excellent position to consider offering a service to Canada’s busiest airport, maybe as part of wider-ranging long-haul expansion at Hamburg, flying to multiple long-haul destinations.

The mixture of origin of the potential travellers is different according to Kearsley’s data. “The split between passengers from Canada and Hamburg is nearly balanced. Canadian overnight stays in Hamburg, as well as our passenger figures to Canada are growing [16/17: +18%].”

Toronto is served by two main airports, with Pearson being the only one operationally capable (there is a restricted runway length at downtown Toronto City) of offering a non-stop flight to Germany, so is therefore the only airport being considered at the Canadian end of the potential sector. Contemplating the Toronto end of the route, Pearson’s leading capacity provider of its current 44 serving airlines is Air Canada, which offers 56% of the airport’s weekly seats. The carrier presently has a strong visibility in the Canada-Germany market, flying three times daily to Frankfurt and twice-daily to Munich. In second and third spots at Pearson are WestJet (18% share of seats) and Air Transat (3.6%), both of which have significant European operations, but neither currently feature any German destinations. Perhaps with this compelling Skyscanner data, Hamburg will become the next German service for Air Canada, or indeed WestJet’s or Air Transat’s only German operation.

“Hamburg has also a lot to offer to Canadians,” states Kearsley. “Besides having many tourist attractions in the city itself, Hamburg is the gateway for North Sea and Baltic cruises.” Inbound travel to Hamburg from North America is growing because of the increasing international awareness for the Elbphilharmonie (Hamburg’s new world-class concert hall) and the Miniature Wonderland (the world’s largest model railway) acting as tourist magnets. “The Elbphilharmonie, with 4.5 million visitors in 2017, ranks #1 of all sightseeing highlights in Germany, ahead of famous places like Neuschwanstein Castle. Due to this buzz, Hamburg has been voted for in Lonely Planet’s best in travel 2018.” 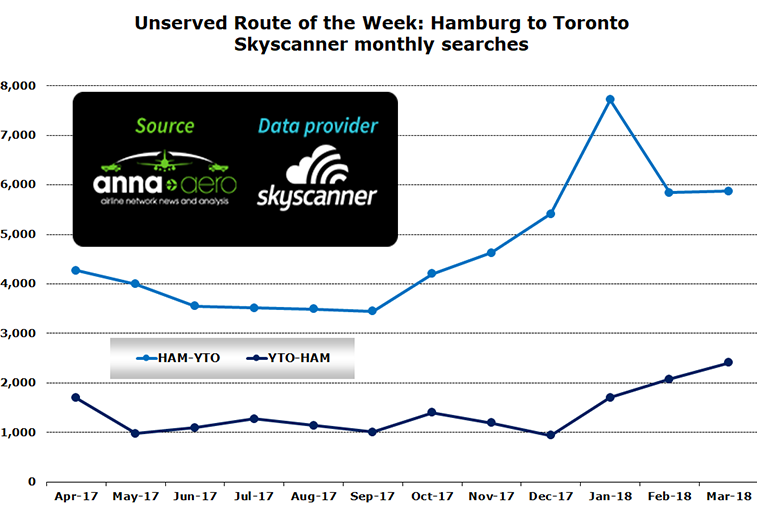 When looking at the previous year of search data (graph above), the busiest month (from Hamburg) is January 2018, with nearly 8,000 searches. Given the anticipated booking profile of the route – long-haul leisure – nearly 50% of travellers on this potential sector will want to book between seven to five months before departure, so this would seem to indicate that the busiest months for traffic will be between June and August. Using the same methodology for the Toronto end of the sector, the peak months for traffic will be between August and October.

According to OAG Traffic Analyser, because there is no direct service, the top three connecting options chosen by those passengers who did book travel between Hamburg and Toronto in the last 12 months (year ending March 2018) indicates that the majority of connecting travellers used Frankfurt (27%), Dublin (15%) and Reykjavik/Keflavik (13%). Looking at the traffic flows in the opposite direction, the top two airports are found in the same order, but with London Heathrow jumping to third spot (17%) and pushing Keflavik (13%) down into fourth position.

With a lack of direct services, travellers between these two cities have clearly become used to these one-stop alternatives. However, the market demand is extremely buoyant – as the graph above shows, with 8.3% of the Skyscanner searches for these indirect Hamburg to Toronto services converted into ticket sales – that’s more than the average 6.3% achieved for Skyscanner conversion/purchase rates for all direct routes available from either Hamburg or Toronto. However, with nearly 73,000 annual searches in the last year, and with the sector being operated by an appropriately-sized aircraft for the type of route, a two or three times weekly seasonal service should be immediately viable for the airline choosing to start this potential city pair. “From 2005-2011 Air Transat served Hamburg-Toronto in the summer, with up to twice-weekly A310 flights and grew the market to 30,000 passengers (two-way). Even today, without a non-stop flight to Canada, we see more than 28,000 passengers (two-way) travelling between these two cities. We expect these numbers to be stimulated further with a non-stop service,” concludes Kearsley. 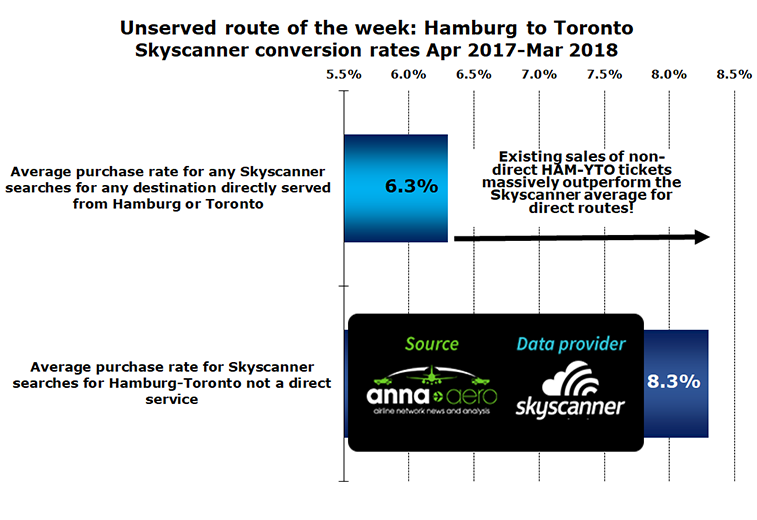