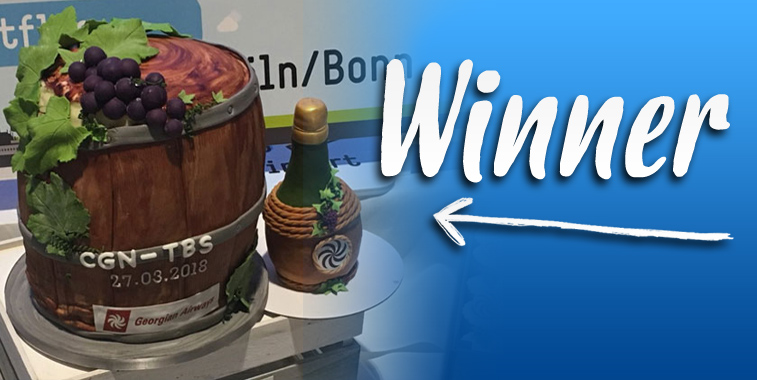 No doubt there will be a few corks popping (and maybe the odd keg) in Cologne this evening, as the German gateway has secured yet another Cake of the Week public vote award for its full-to-bursting trophy cabinet outside the CEO’s office. Georgian Airways, which was the recipient airline in the Part I vote last week, makes it back-to-back wins.

Part II of the Cake of the Week public vote was closed at 17:00 yesterday. Having won Part II of the same competition in W17/18; Part I of S17; Part II of W16/17; and Part II of W15/16 (our data elves stopped looking beyond S14) Cologne Bonn clearly has the winning formula – a secret that is more closely guarded than Coca-Cola’s recipe and just what exactly is in pork scratchings. Securing 33% of the votes, the German airport lifts the second anna.aero reader-decided S18 Cake of the Week trophy. Its closest rival was Katowice, which claimed a respectable 24% of the thousands of votes cast. It should also be noted that both S18 competitions have been won by airports celebrating the start of services from Georgian Airways. The German airport shared this week’s public vote awards with Cardiff Airport which was victorious in Part II of the Arch of Triumph competition.

The public vote for the best Cake of the Week returns in October/November, when the anna.aero reader will again get the opportunity to determine the weekly winners – and no doubt Cologne Bonn will again be in the mix for honours. N.B. The airport names which are underlined are the cake creators in question.