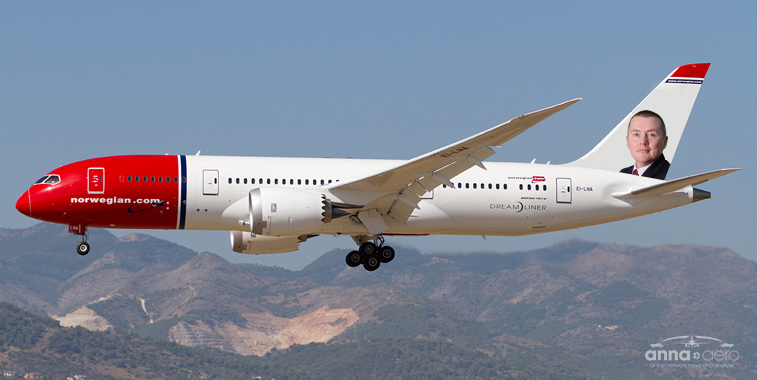 Could IAG CEO Willie Walsh become Norwegian’s next tailfin hero? On 12 April IAG confirmed that it had taken a 4.6% in LCC Norwegian, with its own share price falling 1.2% that day, whereas Norwegian’s jumped 47%. If the LCC was to become part of the airline group, it would result in Gatwick overtaking Dublin to become the group’s fourth largest hub, while Barcelona and Madrid would also see IAG operations strengthened.

While there has been much talk of Lufthansa and easyJet pursuing Alitalia, it was IAG that stole the airline news headlines on 12 April after it was confirmed that the airline group had purchased a 4.6% stake in Norwegian, and that it was looking at a possible bid for the carrier. As airlines are steadily eating each other up on the European stage, anna.aero has decided to take a closer look at the implications of a  purchase deal, and how an absorption of Norwegian into IAG would fit with its current services.

Presently London Gatwick is IAG’s fifth largest airport this summer with regards to weekly departing seats, with its operation being 32% smaller than fourth placed Dublin. However, a purchase of Norwegian, for which Gatwick is the LCC’s fourth largest base, would give IAG an extra 120,000 weekly seats. The potential purchase would therefore mean that IAG’s Gatwick operation would be 9.6% larger than its current planned schedule from the Irish capital. Another advantage for this purchase would be connections, with both IAG airlines and Norwegian operating from the South Terminal at Gatwick. 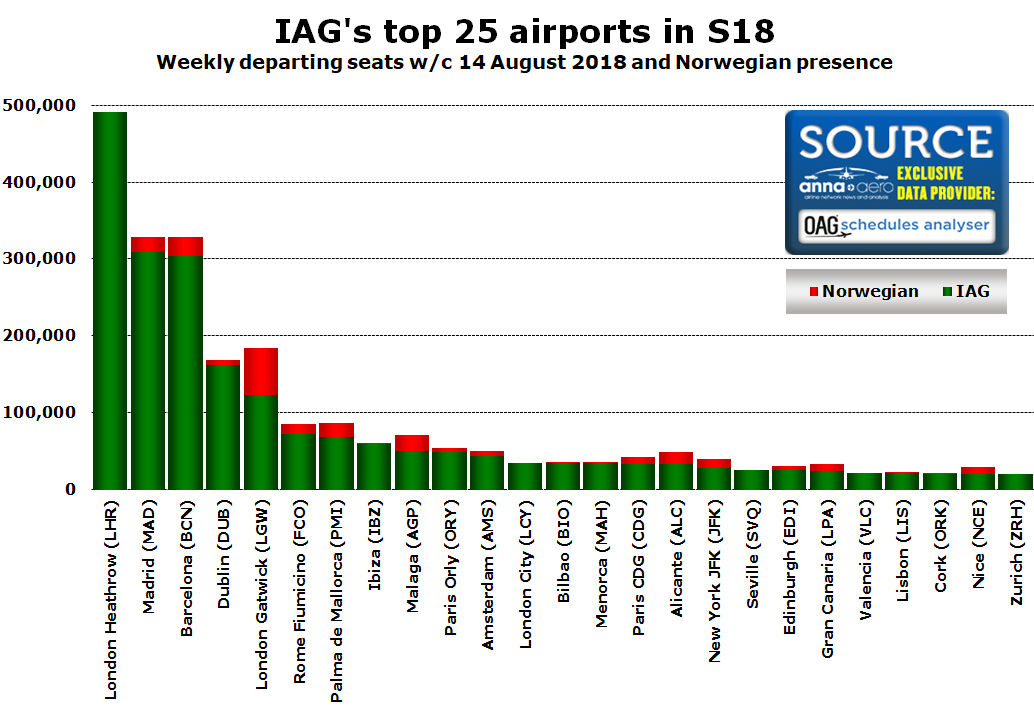 Only five of IAG’s top 25 airports are currently not served by Norwegian this summer, namely London Heathrow (largest IAG airport), London City (12th), Seville (18th), Valencia (21st) and Zurich (25th). Although the bid will be seen as a strategic step of getting a foothold on Norwegian’s ever-expanding transatlantic and long-haul network, just one non-European facility makes it into the top 25 airports for IAG, with that being New York JFK. Of course, if a deal took place, Norwegian’s operations at its Scandinavian hubs would push well into IAG’s top 25 rankings, and a few US airports would also move up the rankings.

While it has been speculated that IAG is considering the move in order to obtain Norwegian’s ever-expanding long-haul transatlantic network, it should be noted that the airline’s long-haul operation from Gatwick only accounts for 26% of its weekly departures from the London airport this summer, although this has grown from the 14% share that was reported in S17. This summer, Norwegian is offering 70 weekly departures on long-haul services from Gatwick, up from 34 in S17, with its non-European network from the UK’s second busiest airport more than doubling during the past year. While the long-haul market certainly appears on the surface to have been successful for the LCC, the airline’s robust short-haul presence at Gatwick has encountered set-backs, with it offering eight less weekly departures on European routes in S18, while in S17 there were 15 less weekly flights versus S16. This shuffling of the deck may have come as a result of the carrier wanting to utilise its slots on its increasing range of long-haul sectors. Routes that Norwegian has cut from Gatwick over the past two years include Budapest, Fuerteventura, Rome Fiumicino and Warsaw Chopin.

Of course one of the biggest coups for IAG if a takeover of Norwegian did occur would be a massive foothold into the Scandinavian market, particularly at the hubs of Copenhagen, Helsinki, Oslo Gardermoen and Stockholm Arlanda. Norwegian is currently the second largest airline in the Nordic nations, confirmed by anna.aero in a recent analysis, with its operation 8.5 million departing seats less than SAS. Presently Norwegian is the largest carrier at Oslo Gardermoen (16.34 million two-way seats in 2018), and the second largest carrier at Stockholm Arlanda (8.76 million), Copenhagen (7.54 million) and Helsinki (3.67 million) based on data published for this year.

Only overlapping on 17 routes from Gatwick

While the potential deal gives IAG a massive presence in Scandinavia, the possibility of wanting to buy the LCC would be based around its emerging long-haul operations from Gatwick. This summer Norwegian competes directly with IAG carriers on 17 routes from the London airport. Only one of those destinations – Madrid – is not flown by British Airways, but by Iberia Express instead. Interestingly, Norwegian only has the greater share of departures between it and IAG on two routes, namely JFK and Oakland, with BA confirming recently that its operation to the latter will now become a summer seasonal operation. In total Norwegian has a 29% share of all departures between it and IAG carriers on the routes in which they both operate this summer from Gatwick. If Norwegian joined the IAG family, the airline group would offer 992 weekly departures from Gatwick this summer. However, that still falls behind easyJet’s 1,350 departures, meaning the UK LCC would still offer 37% more departures than IAG, even if it did own Norwegian at this time. 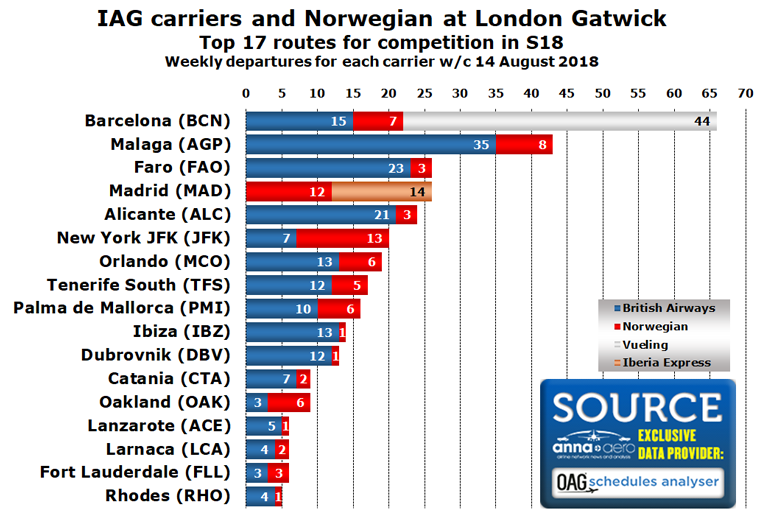 Of the competing services from Gatwick, four are to the US, eight in Spain and the rest being other leisure destinations across the Mediterranean. However, Norwegian has moved in recent times from Gatwick and Scandinavia to develop further in mainland Europe. One of those markets in particular is Spain, Norwegian’s fastest-growing market in 2017, with it also overtaking Sweden to become the carrier’s second largest country of origin. This indeed would be a worry for IAG, given its investments in Vueling and Iberia, Spain’s second and third biggest carriers after Ryanair. Norwegian is presently Spain’s sixth largest operator after Air Europa (fourth) and easyJet (fifth), carrying 8.57 million passengers from the south European country last year. IAG operators flew 73 million to/from Spain last year. Ryanair, Spain’s leading airline, flew 44.02 million passengers to/from Spain in 2017.

Norwegian a greater threat in Spain for IAG

Unlike its operation out of the UK, Norwegian has a much more dispersed presence in Spain. As a result of this, Vueling, Iberia and LEVEL are rivals on more routes with Norwegian than the latter is with BA or Aer Lingus. Interestingly Aer Lingus and Norwegian don’t compete directly on any airport pair. Based on OAG schedules for the w/c 14 August, Norwegian competes with Vueling, Iberia and LEVEL on 35 routes, with only four of these being long-haul services. That means at present, Norwegian and IAG carriers compete directly on eight airport pairs. Further expansion from LEVEL at Paris Orly later this year means that it will cross Norwegian on its route to New York Newark, taking the competition on long-haul routes with IAG to nine. 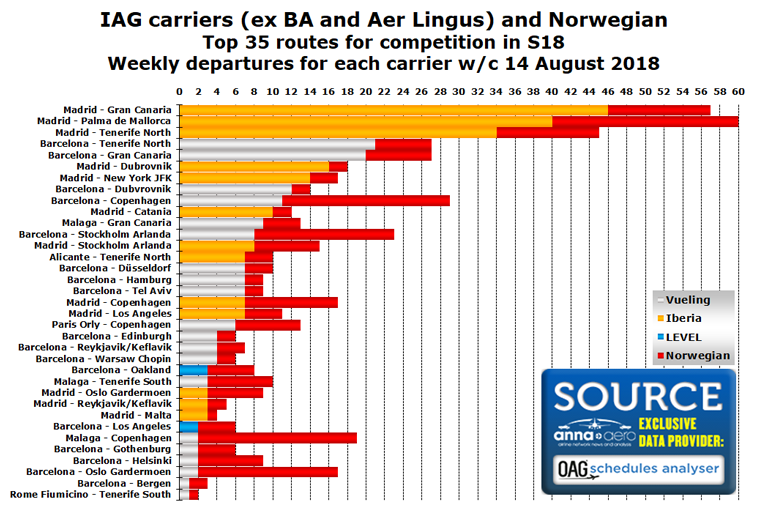 All this being said, it is still only early stages in the possible buyout of Norwegian by IAG, with the airline group not giving any clear indication as to the main purpose of wanting to pursue the LCC. Either way, it will be interesting to see, if a purchase took place, what network plans IAG would have for Norwegian, or if the group’s focus of pursuing Norwegian could hamper its interests at BA and Aer Lingus. 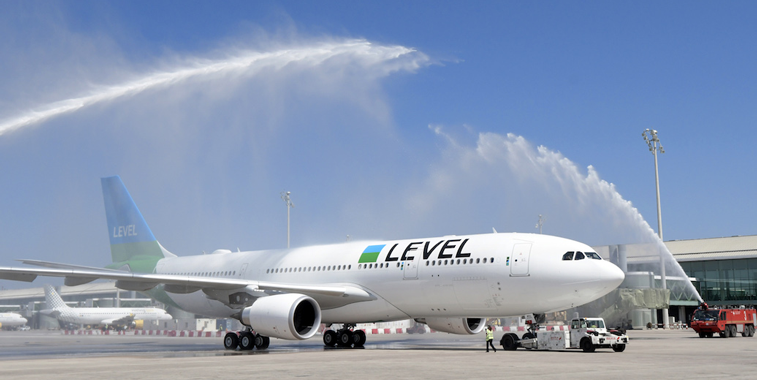 IAG is no stranger to the low-cost long-haul world, having established the brand LEVEL last year with flights from Barcelona to destinations in North and South America. It will expand its operations to Paris Orly shortly. Presently IAG’s in-house LCLH carrier competes directly on two airport pairs with Norwegian, with the latter operating more flights to Oakland and Los Angeles than the former from Barcelona. It will be interesting to see what happens to this brand if Norwegian is indeed purchased by IAG. Either way, anna.aero will be sure to bring you the latest developments of this tale.