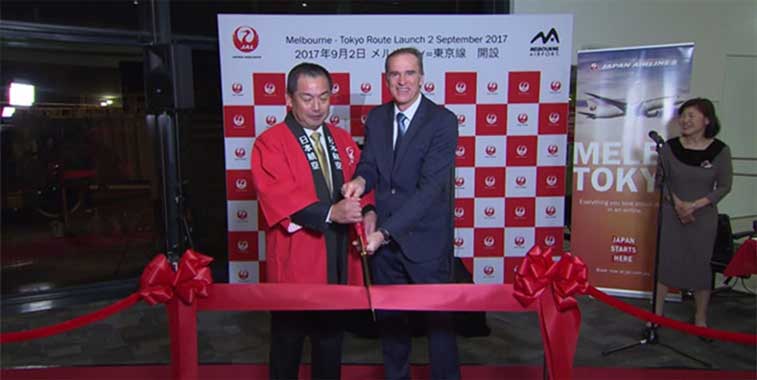 Seat numbers on domestic and international links from Japan exceeded the 257 million mark in 2017, an increase of 3.9% compared to 2016. Despite a downward trend in population figures, the country’s air services continue to grow. Japan Airlines is the flag carrier and second largest airline in Japan. It opened a new link between Tokyo Narita and Melbourne last September.

Japan boasts one of the most mature commercial air service networks in the Asia Pacific region. United Nations estimates suggest that the country’s population has remained relatively stable over the past 10 years, witnessing a moderate decline from 128.6 million in 2009 to 127.5 million in 2017, based on the medium variant population estimate. OAG schedule data shows that during the same period, air service growth has been oblivious to this trend, with the Japanese market coming off the back of six consecutive years of growth.

There were 199.1 million two-way seats available on all international and domestic flights serving Japan in 2008. By 2017 this had grown to 257.6 million seats, an increase of 29.4%. There was a moderate year-on-year increase in capacity in 2009, before two straight years of cuts saw available seat numbers drop 4.5% from 2009 to 2011. This was most likely associated with the global economic recession. Since 2011, the Japanese market has enjoyed six consecutive years of capacity increases. From 2011 to 2017 the available capacity rose by nearly one-third. The average annual increase in seats from 2008 to 2017 was 3.0%. 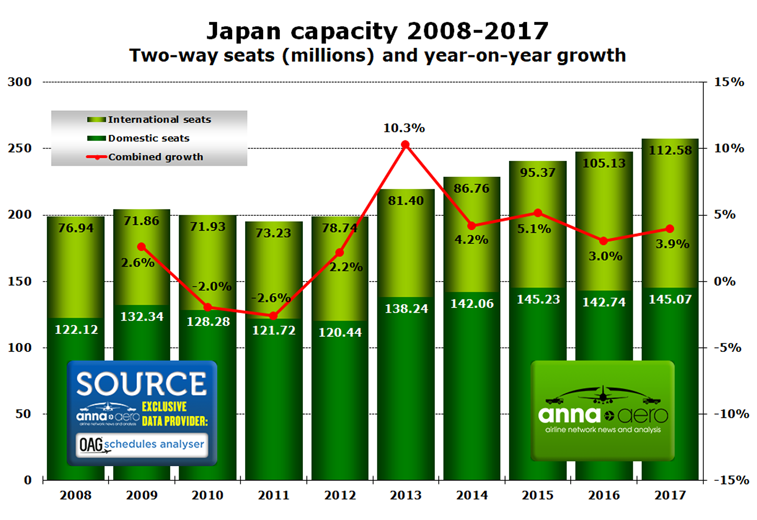 Domestic services are a big part of the air service network in Japan, with the country well known for the use of large wide-body types on short, internal sectors. Over the past 10 years, domestic routes have accounted for more seats than international services in the Japanese market, but the gap is closing. In 2008 there were 122.1 million seats available on domestic links. This had increased by 19% to 145.1 million by 2017. Over the same period, the two-way seats available between Japanese airports and international destinations increased by 46%, from 76.9 million to 112.6 million. This resulted in the share of seats operated on domestic services dropping from 61% in 2008 to 56% last year.

All of the top 12 carriers serving Japan in 2017 are based in the Asia Pacific region. Eight of these were Japanese, with the remainder representing South Korea, Taiwan, China and Hong Kong. The top five carriers were all Japanese and accounted for 56% of the available capacity serving their home country last year. All Nippon Airways (ANA) and Japan Airlines (JAL) were largest carriers, representing 48% of the available seats between them. ANA was the largest carrier in terms of both domestic and international services. It accounted for an impressive 42% of all domestic seats, significantly ahead of its nearest rival JAL, which provided 28%. Japan’s two largest operators also accounted for 11.5% and 9.2% of all international seats respectively. The highest-ranked carriers from outside of the Asia Pacific region were US operators United Airlines (15th place) and Delta Air Lines (18th position). 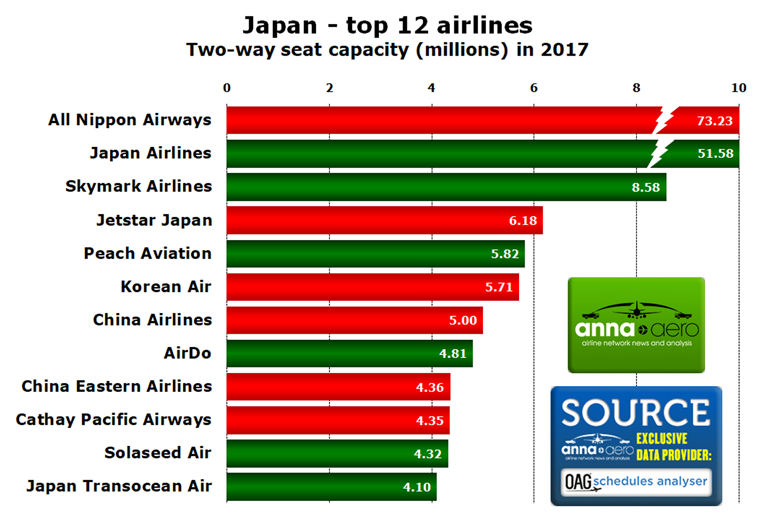 Half of the top 12 carriers offered more capacity on Japanese services in 2017 than they did in 2016. The largest increases came from Solaseed Air (37.9% increase) and StarFlyer (11.2%). LCC Solaseed Air is focused on domestic connections. All of its growth last year came from increasing capacity on existing services including on five internal links from both Tokyo Haneda and Okinawa. Six of the leading airlines (highlighted in red) cut capacity in the Japanese market last year. The majority of these reductions were marginal, with only Korean Air (2.9% cut) and China Airlines (2.5%) cutting their available seats by more than 1.0%. Outside of the top 12, South Korean LCCs Jeju Air and t’way air demonstrated some of the largest capacity increases in the Japanese market last year, growing their available seats by 47.1% and 171.3% respectively.

The Japanese airport league table is topped by two Tokyo facilities. Haneda is by far the largest for departing seats, with 53.15 million available in 2017. This represented 26.4% of all departing capacity from Japan’s airports last year. The second busiest facility is Tokyo Narita which offered 24.40 million one-way seats in 2017. Between them, the two Tokyo hubs provided 38.5% of the available seats from Japan. Haneda is the dominant domestic departure point, accounting for 29.8% of Japan’s internal seats last year, but Narita is the busiest airport for international departures. Tokyo’s second largest facility handled 35.2% of the country’s outbound international capacity in 2017, placing it ahead of Haneda which accounted for 22.7% of international one-way seats. 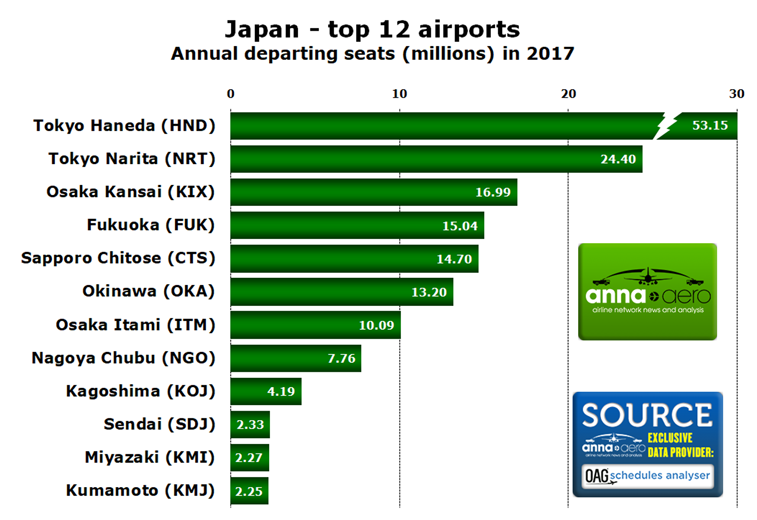 All of the top 12 Japanese airports experienced a year-on-year increase in departing seats from 2016 to 2017. The largest increases came at Sendai (8.1% growth) and Miyazaki (7.8%). Sendai witnessed additional seats from multiple carriers including JAL, Peach Aviation and Ibex Airlines, while Miyazaki benefited from increased operations by Solaseed Air, ANA and JAL. The only change in rankings came between Miyazaki and Kumamoto, with the former replacing the latter in 11th position after growing at a slightly faster rate last year.

Nine of the top 12 domestic routes, based on available capacity in 2017, involve links between the 12 top-ranked airports. Ten of these routes serve Haneda. The busiest domestic route last year was the service between Haneda and Sapporo Chitose with 6.1 million one-way seats available. OAG schedules show that this airport pair will be served by four carriers offering a combined 368 flights during the week commencing 17 April 2018. That is an average of 52 to 53 flights per day.

All but one of Japan’s top 12 international markets are located in the Asia Pacific region. The largest of these is South Korea, which represented 20.3% of the available one-way seats on international services last year. In total, seven South Korean airports welcomed regular flights from Japan in 2017 with Seoul Incheon and Busan seeing the most seats. The leading destination from outside of Asia Pacific was the US, which finished fourth, while the highest-ranked European markets were Germany, France and Finland which finished in 14th, 16th and 18th positions respectively. The strongest year-on-year growth amongst the top 12 markets from 2016 to 2017 was witnessed on services to South Korea (28.7% increase in capacity). Three international markets (highlighted in red) experienced a cut in seat numbers, with the largest of these coming on flights to Guam (10.9% reduction), following a significant reduction in capacity by Delta. The USB3 carrier has subsequently ended all services between Japan and Guam. 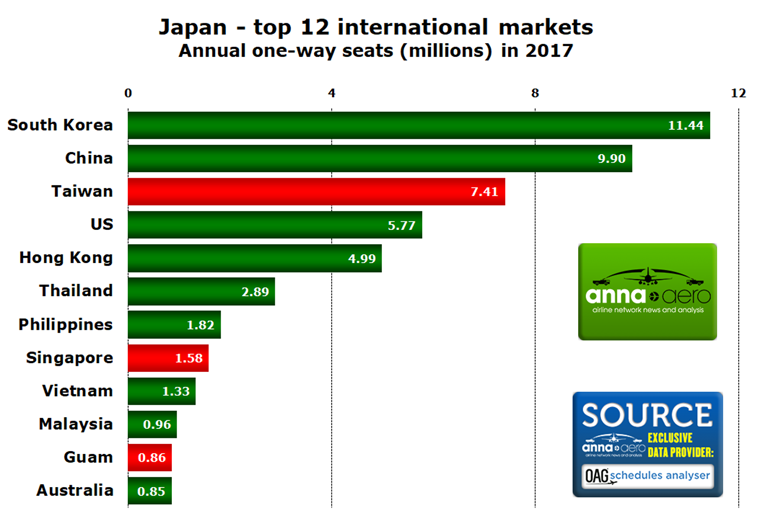 Five of the top 12 international routes from Japan originated from Narita in 2017, while a further four served Osaka Kansai. The largest international airport pair, according to capacity figures, was the link between Osaka Kansai and Seoul Incheon, with 1.8 million one-way seats available. OAG schedules show that this route will be served by eight different carriers, offering a combined 388 departures during the week commencing 17 April. Incheon is the destination for three of the top 12 international routes, while Taipei Taoyuan, Hong Kong and Shanghai Pudong each feature twice.

anna.aero’s New Routes database indicates that 31 new services will be launched in the Japanese market during 2018. Of these, only seven will be on internal airport pairs, suggesting that the gap between domestic and international seat numbers will continue to narrow. 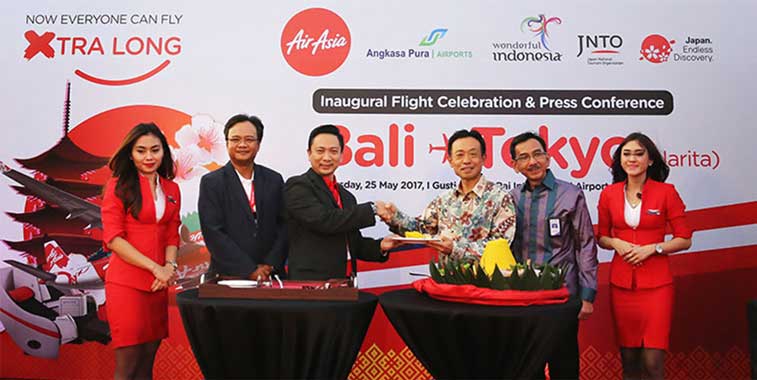 The domestic market plays an important role in Japanese air services, with some short sectors operated by wide-body aircraft. Domestic destinations account for more capacity than international links but the latter routes are gaining ground. One new addition to Japan’s international network was this AirAsia X Indonesia service between Denpasar in Bali and Tokyo Narita, which launched last May.