Lagos Airport set for growth in 2018 thanks to 7.4% rise in annual capacity; comes on the back of traffic falling below seven million 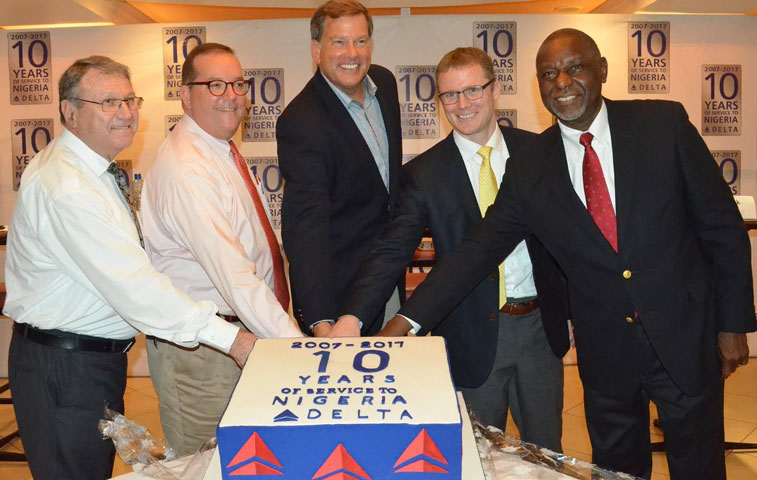 Lagos is the most populous city in Nigeria, with it being home to around 21 million people. The city is served by Murtala Muhammed International Airport which sits 11 kilometres from the centre. In terms of available departing seat capacity this year, Lagos is presently Africa’s eighth largest airport, offering 4.72 million one-way seats in 2018. It sits ahead of Durban in ninth (3.69 million) but behind Algiers in eighth (4.91 million). With regards to Africa’s leading airports, Lagos will be the second best for growth in 2018 as things stands, with it reporting a 7.4% rise in seats for 2018, only being beaten by Addis Ababa (Africa’s third largest airport with regards to departing seats; 8.67 million) which is forecasting a 19% growth rate. Sitting just behind Lagos is Casablanca (fourth; 6.77 million), with the capital of Morocco expecting a 4.5% rise in one-way seats this year versus 2017.

Capacity returning to growth in 2018

Lagos, as already stated, is scheduled to offer 7.4% more seats in 2018 than it did during the course of last year, with 4.72 million one-way seats being offered this year versus the 4.39 million that were flown during 2017. The news is very welcoming for the airport, having posted three years of consecutive cuts between 2015 and 2017. The impact of airline cutbacks at Lagos in recent years has resulted in the airport seeing passenger numbers dip below the seven million barrier, with anna.aero forecasting traffic being down 5.0% in 2017 (based on capacity setbacks indicated in OAG) to a total of 6.36 million passengers. This result will have meant traffic dropped by one million passengers between 2014 and 2017. With full-year results for 2017 not yet released, anna.aero has chosen not to forecast the potential passenger throughput for 2018. 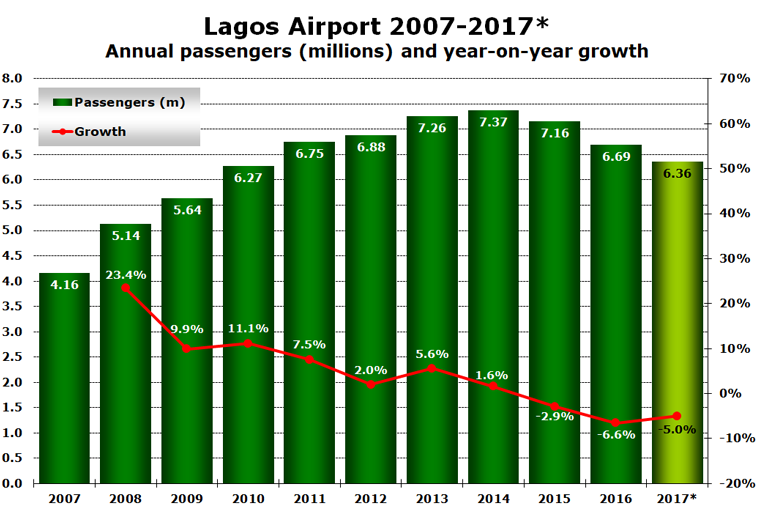 For the last full-year where statistics have been published (2016), it shows that domestic passengers accounted for 56% of the airport’s traffic, with this rising from a 53% market share in 2012. However, it appears that Lagos suffered a major setback on the domestic front that year, with Nigeria-bound travellers falling by 12% versus 2011, going from 4.13 million to 3.64 million. This means that its market share fell from 61% of all passengers from Lagos in 2011 to 53% in 2012.

As a result of Emirates returning to a twice-daily service between Dubai and Lagos, having reduced to a daily operation between June 2016 and December 2017, the UAE mega-hub has jumped past London Heathrow to become Lagos’ fourth most popular route. The city pair encountered a 85% rise in seat capacity as a result of the increased frequency. Overall it is the domestic connection to the capital, Abuja, which is the most popular route from Nigeria’s largest city, with the airport pair seeing a 5.4% rise in capacity last year, meaning that the sector has now surpassed the one million one-way seat capacity threshold. Of Lagos’ top 12 routes, three (highlighted in light green) have encountered drops in annual seats, with two of these – Owerri and Benin – being domestic connections. 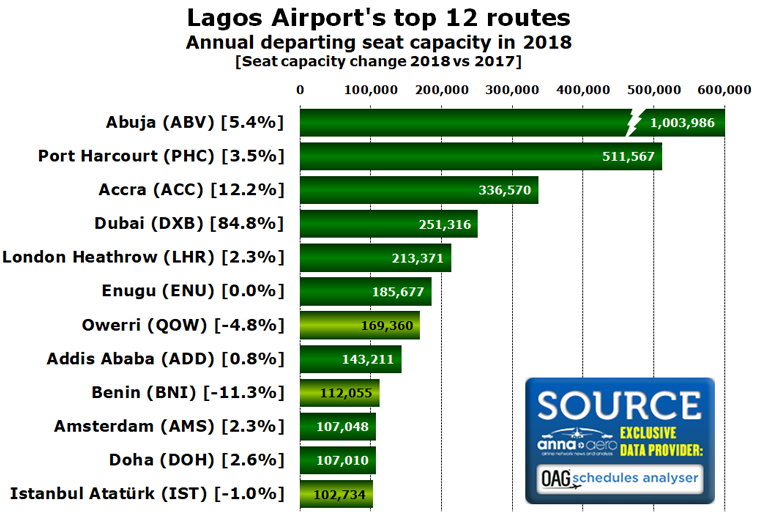 Outside of the top route rankings, one link which has seen a robust rise in capacity is Abu Dhabi (18th largest route), with the route to the UAE capital reporting a 51% upswing in seats this year. The reason for this is due to Etihad Airways recently adding a fifth weekly service on the 5,805-kilometre sector, while the MEB3 carrier’s operation will increase to a daily rotation from 1 May. The airline flies the route using its mixed A330 fleet. Other hub connections to see a rise in capacity this year include Frankfurt (16th largest route; 15% rise in annual seats), Paris CDG (19th; 2.9%) and Nairobi (28th; 37%). One recent addition to Lagos’ network is New York JFK, with Delta Air Lines having started the route on 25 March. The link to JFK was flown by Arik Air until February 2017.

One airline which is making waves at Lagos is Aero Nigeria. It is an airline offering scheduled passenger services to various Nigerian domestic airports and international destinations in the West African sub-region. This year it has added flights from Lagos to the Nigerian city of Kano, while also increasing the frequency on its services to Abuja, Asaba, Port Harcourt and Warri. As well as Aero Nigeria, other domestic carriers reporting stable seat capacity levels versus last year include Air Peace (3.4% rise in capacity) and Med-View Airline (1.5%). Arik Air, Nigeria’s leading airline, is posting a 6.5% cut in seats from Lagos this year, while Dana Air, which operates four MD-80s, is reporting a 0.9% drop in scheduled capacity. The best international carrier for growth is Emirates as a result of its increased frequency from Dubai. Interestingly, Lagos’ top four airlines mirror the results seen at Abuja Airport. 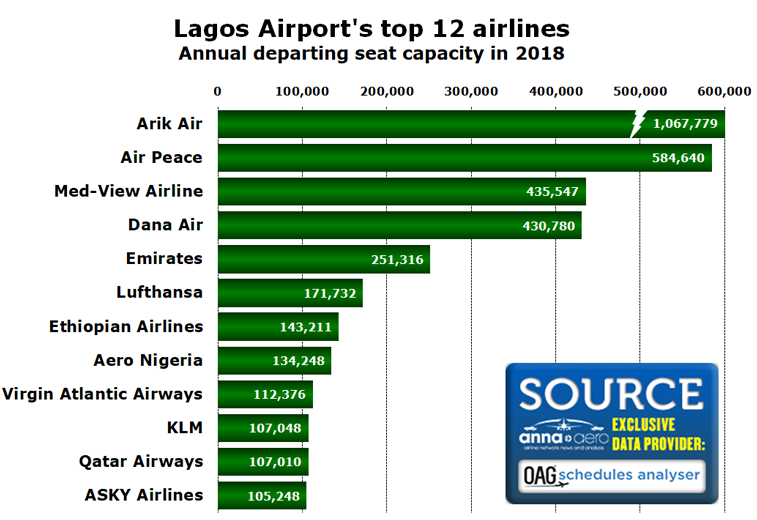 Outside of the top 12 carriers, Lagos is reporting two new airlines to its carrier roll call in 2018, namely Air Italy (a conversion from Meridiana) and Air Namibia, with the latter launching flights from Windhoek on 29 June according to the carrier’s website. Air Namibia will also offer onward service to Accra, with the leg between Lagos and the Ghana capital also bookable. Flights will operate four times weekly. Elsewhere outside the top 12, British Airways (13th largest operator) is reporting a 15% rise in seat capacity on its route from London Heathrow, with Virgin Atlantic Airways (ninth) posting a 5.3% rise in seats on the same leg. Delta Air Lines (19th), an airline which in 2017 celebrated its 10-year anniversary of serving Lagos, is reporting a 36% growth in capacity as a result of it opening flights from JFK, while fellow SkyTeam member Kenya Airways (20th) is showing a 22% upswing in seats this year versus 2017. 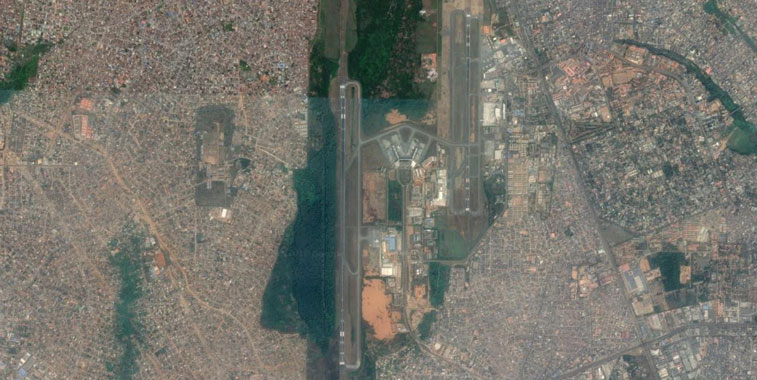 Lagos is served by Murtala Muhammed International Airport which sits 11 kilometres north from the centre. Nigeria’s biggest gateway has two runways, with 36L/18R being 3,900 metres and 365/18L 2,743 metres. The airport has two terminals (international and domestic), with the international terminal being in the middle of the airport site, while the domestic operations occur on the eastern side of the airport. In 2016, the two terminals processed 6.69 million passengers, down 6.6% versus the airport’s result for 2015. Domestic passengers account for 56% of all traffic.