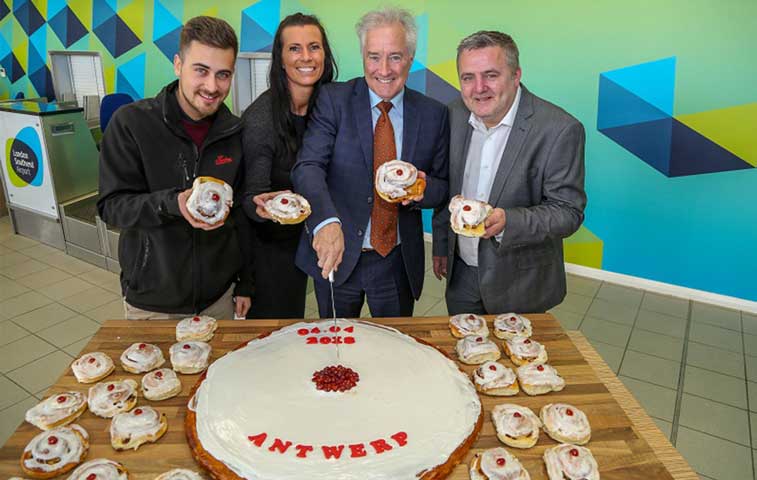 London Southend will welcome a number of new services during 2018. Glyn Jones, CEO of Stobart Aviation was among those celebrating the launch of Flybe’s new service from Southend to Antwerp on 4 April. The route actually commenced on 26 March and is operated four times weekly during S18 on ATR 72s.

In 2012, London Southend became the sixth legitimate option for those seeking to fly to/from the UK capital. Situated approximately 41 miles from central London, it had spent decades in commercial obscurity. For much of the 1960s it was the third biggest airport serving the UK capital, with fewer passengers than London’s Heathrow and Gatwick but considerably more than London’s Luton and Stansted airports. In 1967 London Southend’s annual passenger traffic exceeded 680,000 which made it the seventh largest airport in the UK at the time. From the late 1960s, the airport’s traffic figures declined and during the period from 1991 to 2011 annual passenger numbers failed to exceed 100,000.

Southend’s fortunes were transformed following its acquisition by Stobart Group in 2008. The new owners set about a complete infrastructure rebuild and refurbishment project, including the construction of a new terminal connected to a new rail station on the line to Stratford and London Liverpool Street. The runway was extended by 300 metres to its current length of 1,856 metres, permitting economically viable services by larger aircraft, while a new control tower was also introduced. This overhaul was completed by 2012 and ensured that Southend was ready for action when significant scheduled services returned for the first time in many years. Improvement works have continued, with the new terminal undergoing an extension. “A phase-two extension opened in 2014 creating today’s facility, which was designed to support growth ambitions of up to two million passengers a year by 2020,” explains Bernard Lavelle, Aviation Business Development Director, London Southend Airport to anna.aero. “The airport expects this original passenger projection to be exceeded. A further extension to the terminal has been approved with works likely to commence in late 2018.”

Off the charts growth

Passenger numbers at Southend grew from 40,000 in 2008 to 1.09 million in 2017. This represents a massive 2,388% increase. From 2008 to 2011 passenger figures remained low, as the new owner began the top to bottom rebuild. Traffic dropped to less than 4,000 passengers in 2009 and 2010, before 2011 saw the introduction of regular flights by Aer Arann (now Stobart Air) which boosted traffic figures back up to more than 40,000. The following year marked the launch of services by easyJet and Aer Lingus which led to an annual traffic increase of 1,354%. The positive growth trend continued in 2013 and 2014, with passenger figures peaking at 1.10 million during the latter year. The airport experienced a slight reversal of fortunes in 2015 and 2016 with passenger numbers dropping 21% from 2014 to 2016, but last year witnessed a return to growth with traffic increasing 25% and breaking back through the one million passenger mark once again. This was in part thanks to Flybe which stationed two E195s, operated by Stobart Air, at the airport with a wealth of new services. This momentum looks set to continue with two new carriers and further routes announced for 2018. “We are expecting between 1.8 and two million passengers in 2018, with the aim to grow this towards five million in the next five years,” explained Lavelle. 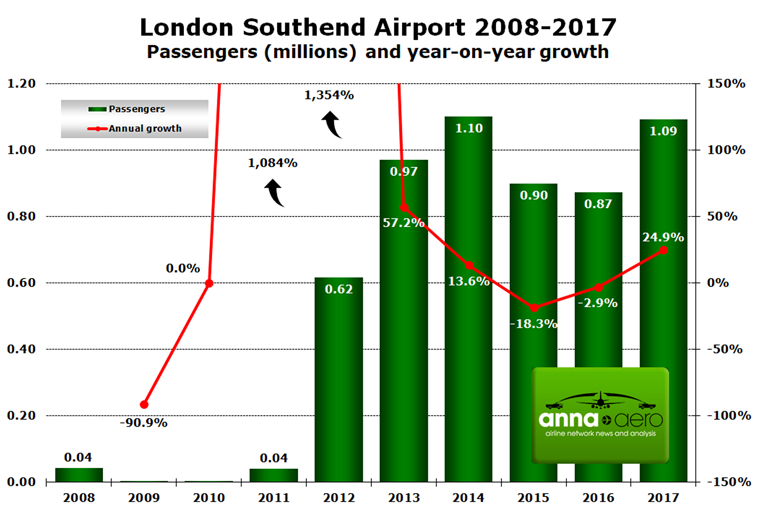 Since the opening of Southend’s new terminal in 2012, the majority of passengers have flown on international flights. In 2009 and 2010 domestic traffic accounted for 72% and 77% of all traffic respectively, but these were years when total passenger numbers failed to reach 4,000, with the airport only supporting a regular, seasonal service to Jersey. International traffic those years was flown on charter operations. Since 2012 non-UK services have accounted for at least 79% of the airport’s annual passengers. In 2017, 96% of traffic travelled on international links. Domestic services accounted for a combined 472,000 seats from 2008 to 2017, peaking at a little over 185,000 in 2013 before dropping back to 42,000 last year. They will be boosted in 2018 after the introduction of multiple daily rotations to Manchester and Glasgow in late 2017. More than 5.1 million passengers travelled through Southend on international links from 2008 to 2017.

From 2008 to 2011 the only airlines operating regular services from Southend were Flybe and Aer Arann, with the latter beginning flights to Galway and Waterford at the start of the summer season in 2011. In 2012 the airport received a boost when easyJet opened a base with three aircraft, following the completion of the London facility’s various infrastructure projects. The LCC accounted for 86% of departing seats from London Southend that year. The other major player was Aer Lingus, whose regional brand took on the Waterford service from Aer Arann, and introduced a new link to Dublin, with both routes being operated by Aer Arann under a franchise arrangement. During a typical peak weak in S12 (in this case the week commencing 31 July), easyJet and Aer Lingus were the only published carriers offering scheduled seats, with the former accounting for 88% of the available capacity. easyJet increased its capacity to around 580,000 departing seats in 2013 and 2014 before reducing this to around 450,000 in 2015 and 2016. Last year saw the LCC boost seat numbers to around 480,000, a 5.4% increase compared to 2016 and 30% more than it offered in 2012, although as previously stated the airline didn’t start operating until the commencement of the summer season in its first year. easyJet remained the largest carrier at Southend, based on available seats in 2017, accounting for 68% of departing capacity. Flybe was the other carrier offering scheduled services in 2017. The regional operator had begun regular year-round services during 2014, with most flights operated by Stobart Air (formerly Aer Arann) under a franchise agreement. All of Flybe’s services from the airport are now operated by Stobart Air. Last year saw a marked increase in capacity from Flybe, which grew its number of departing seats by 211%.

Based on the schedule data for 2018 so far, Flybe stands to more than double its annual departing seats to more than 500,000 during 2018. Southend will also double it scheduled airlines this year, with Air Malta and Loganair due to appear on the departures boards in May and June respectively. During a peak week in S18 (week commencing 31 July), easyJet remains the main carrier, but its market share is diminished compared to the equivalent period in 2012. The LCC is scheduled to provide 50% of the available departing seats, ahead of Flybe (44%), Air Malta (4%) and Loganair (2%). Since the airport’s re-birth in 2012, several carriers have come and gone, including Sky Work Airlines, Adria Airways and Aer Lingus, which ceased operations to Dublin in 2014 although this route is now operated by Flybe.

There were scheduled services available to 33 destinations from London Southend in 2017, of which 30 were international, with three domestic links. In total, 13 separate international country markets saw direct services. The largest of these was Spain, which accounted for exactly one-third of the destinations served and one-third of the departing capacity. All 13 intentional markets were located in Europe. In 2018 there are currently 35 scheduled destinations on offer, four of which are domestic. Dublin and Amsterdam will be the largest routes based on a typical week in peak summer. Between them these two links will account for 17% of the available departing seats during the week commencing 31 July. Four of the top 12 routes (Dublin, Prague, Manchester and Glasgow) were part of a tranche of new services introduced by Flybe in 2017, although the Irish capital is actually a returning link, having previously been served by the airline up to April 2015, while Prague is also flown by easyJet. 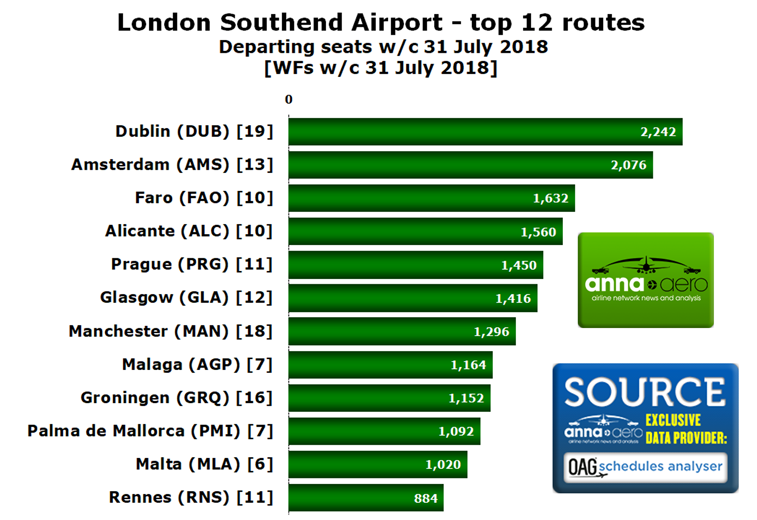 Dublin, Glasgow and Manchester feature amongst the top-ranked routes due to the multiple daily frequencies operated on these sectors in S18. Prague is one of only four routes to be operated by more than one carrier from Southend this year, with Dubrovnik also operated by Flybe and easyJet, while Malta will be flown by easyJet and Air Malta. Lyon has been flown by Flybe and easyJet, but the LCC only operated this sector in the winter season. Southend will offer three routes that are not served from any of the capital’s five other airports during S18. These are the connections to Caen, Carlisle and Groningen.

Southend’s recent momentum looks set to continue in 2018 with the introduction of two new airlines and Flybe’s new high-frequency services to Dublin, Manchester and Glasgow operating year-round after only commencing operations at the start of W17/18. anna.aero’s New Routes Database shows that at least nine new services are scheduled to launch from Southend this year. These include links to Bordeaux, Pula, Dubrovnik and Prague with easyJet, which are scheduled to start in July, and services to Cagliari, Catania and Malta with Air Malta which will begin in May. Flybe has already re-introduced a link to Antwerp and in another notable development Loganair will begin a connection to Carlisle, the other airport owned by Stobart Group which is located in the North West of England, close to the Lake District National Park. Current schedules show that Loganair will offer 13 weekly flights to Carlisle, including double-daily services on week days, while Air Malta will provide seven flights across its three destinations during the week commencing 31 July. Another operator looking to offer services to is IGAvion, which, schedules suggest, is looking to add a twice-weekly connection to Chateauroux this summer. 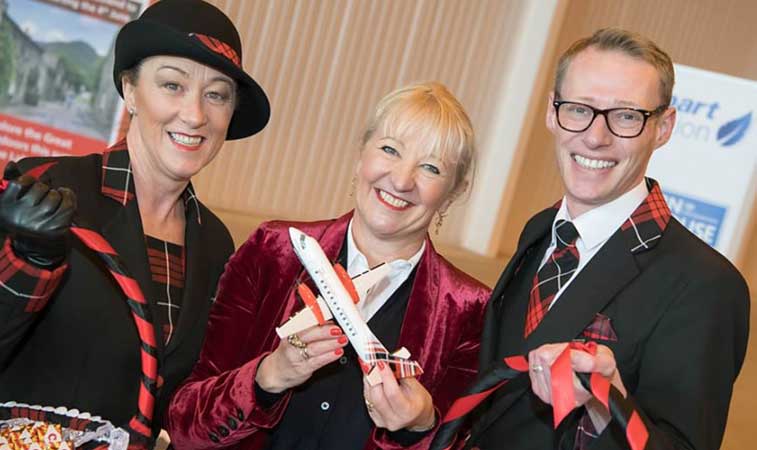 From 4 June Stobart Group’s two airports will be connected for the first time when Loganair begins services on the 439-kilometre route between London Southend and Carlisle. The Scottish carrier will operate the route 13 times weekly.

London Southend has a number of markets in mind for future routes. Commenting on potential domestic additions Lavelle says, “Edinburgh and Belfast are obvious gaps in our market, as is Guernsey.” More international routes are also on the wish list. “There are growth opportunities around Europe, in Germany and Scandinavia in particular, as well as in Eastern Europe,” says Lavelle. “We have the capacity that other London airports don’t have. We are not slot restricted, we have long opening hours, great connectivity to London and a growing catchment market.” 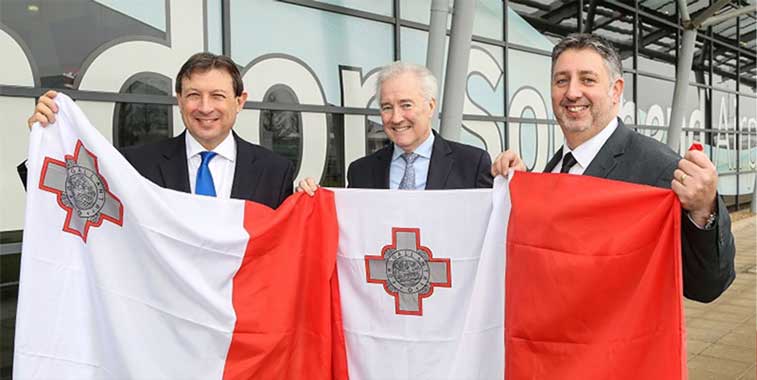 On 4 May London Southend will welcome the arrival of Air Malta, which will introduce services from Cagliari, Catania and Malta. The Maltese operator will operate an average of one daily flight from the airport this summer, plus it will be the only operator on the first two routes. It will, however face competition from easyJet on services to Malta.