Annual seats between Australia and Indonesia have increased by 82% since 2010; Jetstar Airways grows market share from 24% to 41% 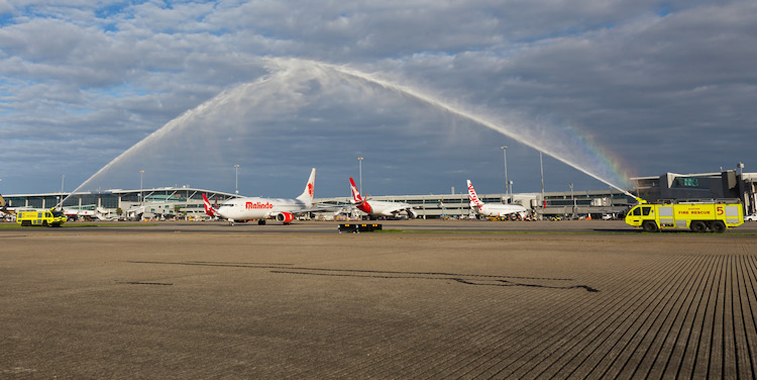 Malindo Air commenced flights to Brisbane in April 2017 from Kuala Lumpur, with the service routing via Denpasar in Indonesia. As the carrier has fifth freedom rights on the route, it has the authority to sell seats between Brisbane and the Balinese airport, meaning that Malindo Air became the seventh airline to link Australia and Indonesia when it launched the route. The carrier will add a second route between Denpasar and Australia in June, when it commences services to Melbourne. Overall annual seat capacity between Australia and Indonesia has risen by 82% from 2010 to 2018.

Indonesia is one of the hottest destinations for the Australian traveller, and in 2016 (last calendar year with full data) just under 3.05 million passengers flew between the two nations according to statistics made public by the Bureau of Infrastructure, Transport and Regional Economics (BITRE), the first time the total had passed the three million barrier. The result means that traffic between the two countries grew by an impressive 15%, with 2.65 million passengers having flown in the market during 2015. If this data is analysed against OAG schedules for the same period, it means that the theoretical load factor on all services between Australia and Indonesia jumped from 78% in 2015 to 85% in 2016, an upswing of 6.9 percentage points.

On the cusp of hitting four million

Seat capacity between Australia and Indonesia is forecast to grow by 1.8% this year, the third consecutive year of growth. The largest carrier in the market presently is Jetstar Airways, with it operating 1.60 million seats between the two countries in 2018, up 8.0% versus the 1.48 million seats it flew in 2017. The LCC has been very dedicated in serving the two nations and adding capacity year-on-year. This strategy has allowed it to grow its market share from 24% in 2010 to 41% this year. Among its highlights in the market last year include it increasing its frequency between Melbourne and Denpasar from three times weekly to daily, plus increasing its operation from Brisbane to Denpasar to daily as well, up from a four times weekly service in July 2017.

Another carrier reporting robust growth between the two nations in recent years is Qantas, having increased its capacity by 131% between 2016 and 2018. This is due to it planning to add a new daily service between Melbourne and Denpasar on 23 June, plus the oneworld member adding an extra weekly frequency on its route between Sydney and Jakarta, meaning that it will now offer six weekly flights between Australia’s biggest airport and the Indonesian capital. Qantas also links Sydney to Denpasar. Overall the country pair has seen annual seats grow by 82% between 2010 and 2018, with the biggest increase occurring in 2011 (27%). 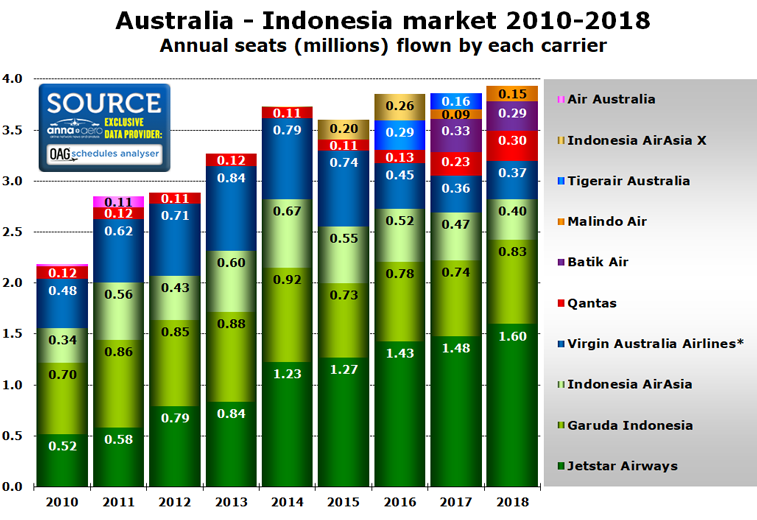 Over the past few years a fair number of airlines have come and gone in the market, with those that have been lost since 2010 including Air Australia (ceased operations in February 2012), Tigerair Australia (pulled out of the market in February 2017 due to issues with Indonesian authorities) and Indonesia AirAsia X (withdrew from routes between Denpasar and Sydney and Melbourne in August 2016). During the past two years, new entrants have included Batik Air and Malindo Air, with the former linking Denpasar to Perth, while the latter links the Balinese airport to Brisbane, a service which originates in Kuala Lumpur. Malindo Air was the last new entrant in the market, having started the route in April 2017. It will add Melbourne to its network in June, with the link from Kuala Lumpur also operating via Denpasar. While this service is bookable, it should be noted that it has not yet been added to the airline’s schedules, therefore it is not included in the table above. In total seven airlines presently offer services between Australia and Indonesia, one less than last year due to Tigerair Australia pulling out of the market.

Given that it is the number one carrier with regards to annual capacity between Australia and Indonesia, it comes as no surprise to see that Jetstar Airways is the biggest provider of services in the market as well, offering seven routes this July. Of these seven connections, five see at least a daily service, with its link from Perth to Denpasar witnessing a three times daily rotation, while its Melbourne to Balinese airport leg is flown twice-daily by the LCC. Interestingly the number one route between the two nations is the link from Perth to Denpasar, with this being flown by four airlines, namely Jetstar Airways plus Indonesia AirAsia (three times daily), Garuda Indonesia (six times weekly) and Batik Air (twice-daily). Besides Jetstar Airways which offers seven routes, Garuda Indonesia operates six airport pairs, with it connecting Melbourne, Perth and Sydney to Jakarta and Denpasar respectively. The latter airport is by far the most popular of the two airports in Indonesia for flights from Australia, with it being the destination for 89% of weekly services from Down Under, with a total of 181 weekly flights being operated this July. 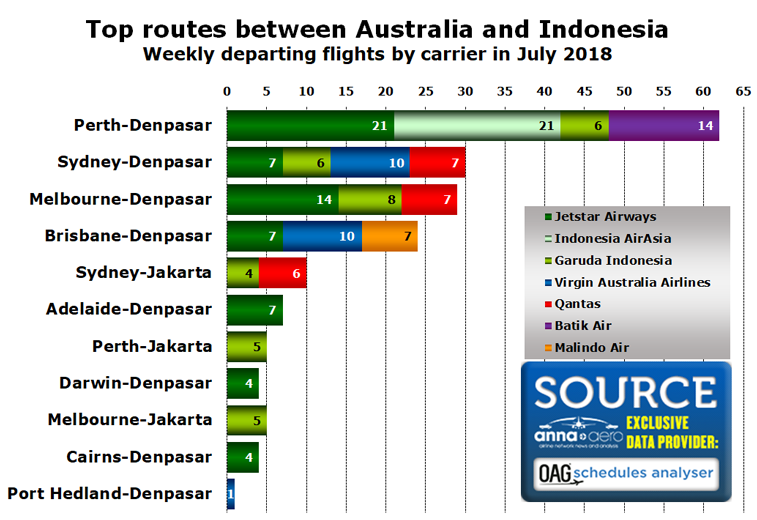 While only 11 routes are currently in operation in the market of over three million passengers, an analysis of OAG traffic data shows that there is enough demand to support further city pairs. The numbers suggest that presently the leading unserved connection between the two countries is from Brisbane to Jakarta, with an estimated 36,600 passengers flying indirectly between the two airports in 2017. This represents 51 PDEW. While a service could stimulate further traffic to support a daily service, there is certainly a strong enough market to potentially support three to four weekly flights. Along with Brisbane, another Australian airport which is showing a sizeable demand towards Jakarta is Adelaide. This city pairing supported around 25,900 indirect passengers in 2017, translating into 35 PDEW. In 2016 a route from Adelaide to Nadi in Fiji was highlighted as a anna.aero-Skyscanner Unserved Route of the Week with 35,000 searches at the time. Since this article the route has been launched by Fiji Airways which has been successful on the service. Could Garuda Indonesia jump at the chance to serve Adelaide to make a connection from Jakarta viable?

Another potential new market at the Indonesia-end is Surabaya. Currently without a link to Australia, it saw 27,400 indirect passengers to Melbourne in 2017, while 26,300 travelled between it and Sydney last year. If and when new routes between Australia and Indonesia are launched, you’ll be sure to hear about them first at anna.aero. 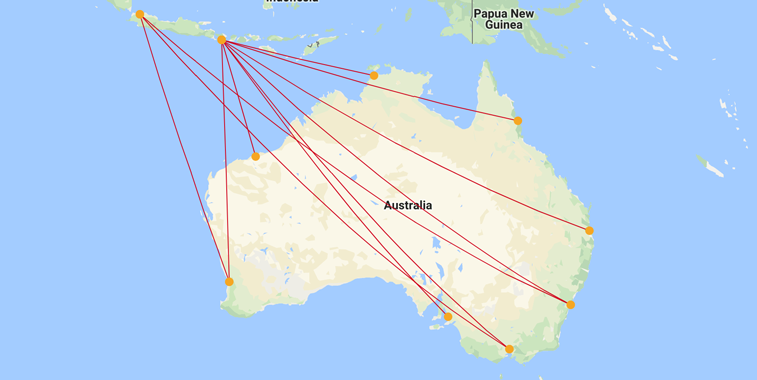 This July 11 routes are currently scheduled to be operated between Australia and Indonesia, with seven airlines presently serving the market. In 2016, 3.05 million passengers travelled between the two countries, with this being a 15% improvement from the 2.65 million passengers that flew in 2015. While no new city pairs are planned between the two nations in the short term, a number of sizeable markets have been noticed by anna.aero, with the top unserved city pair at the moment being between Brisbane and Jakarta, with 36,600 people flying indirectly between the two in 2017. Another large market which has been observed by anna.aero is from Adelaide to Jakarta (25,900 passengers last year).