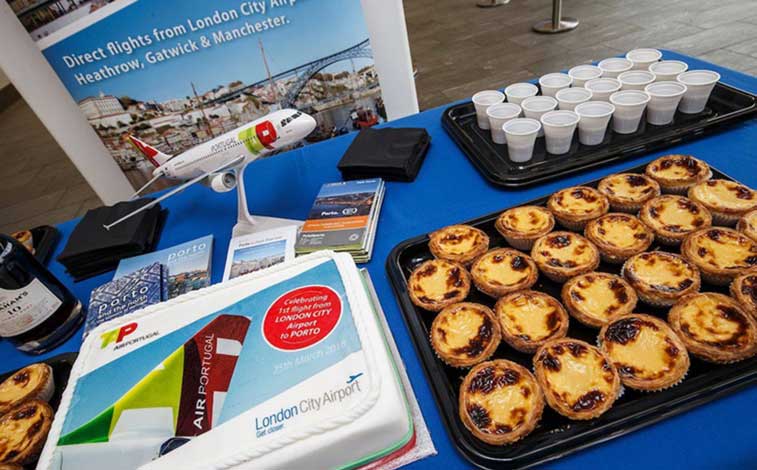 TAP Air Portugal enjoyed an impressive increase in capacity in 2017, boosting seat numbers by 16% compared to 2016 levels. It has now experienced four consecutive years of capacity growth. anna.aero’s New Routes Database shows that the airline added 12 new routes last year, including this service to London City which launched at the start of the W17/18 schedule.

TAP offered 13.91 million two-way seats across its network in 2008. By 2017 this had grown to 18.33 million seats, representing a capacity increase of 32%. Much of this growth has come in the past four years. In 2009 the carrier cut capacity by 2.5%, possibly as a result of the global recession. From 2010 to 2012 seat numbers increased by 4.2%, before further cuts of 1.2% were experienced in 2013. Since that point the airline has enjoyed four consecutive years of growth, with capacity increasing by 29% from 2013 to 2017. This included a 16% increase in available seats last year. Much of that growth was a result of extra capacity being offered by the airline’s mainline aircraft, but there was also a significant increase in the seats offered on TAP Express services operated by Portugalia and White Airways. 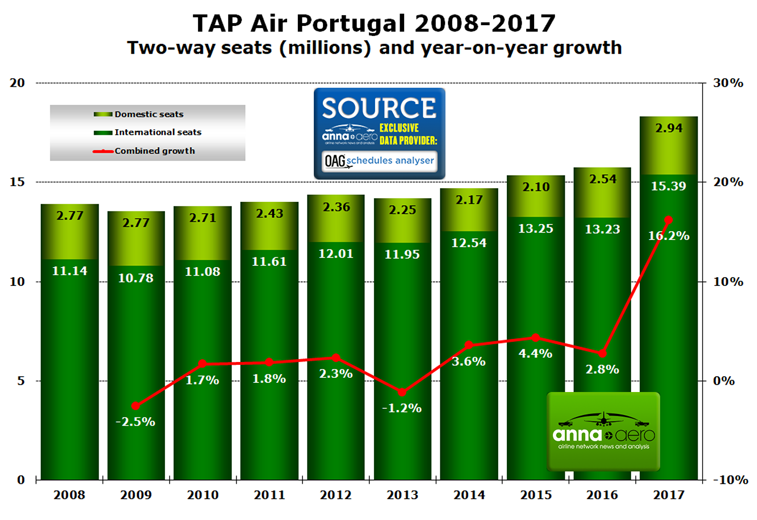 International services have accounted for the majority of TAP’s capacity over the past 10 years. Domestic capacity grew by 5.9% from 2008 to 2017. There were 2.77 million seats available on the carrier’s domestic links in 2008. This had gradually declined to 2.09 million in 2015, before a recent resurgence saw seats numbers reach 2.94 million last year. In contrast, there were 11.14 million seats available on international flights in 2008, and this had increased by 38% to 15.39 million in 2017. International seats accounted for 80% of the airline’s total capacity in 2008, and this had increased to 84% by last year.

Lisbon is by far TAP’s largest hub, accounting for 8.36 million departing seats in 2017, which represented 46% of the airline’s total. Its second largest airport is Porto which hosted 1.26 million one-way seats. The carrier operated scheduled services to nearly 90 destinations from Lisbon last year. Three of its top 12 routes from the capital city were domestic (highlighted in light green). The largest of these links was the Porto route, and this was also the biggest single airport pair in the airline’s network based on one-way seats in 2017. The Lisbon-Porto connection accounted for more than 500,000 one-way seats, which represented 6.0% of the departing capacity available from TAP’s main hub last year. OAG schedules show that the airline will operate 119 flights on this domestic connection during the week commencing 17 April, with 17 daily services. The nine international destinations making up TAP’s top-ranked Lisbon links included two airports in Spain, two in Italy and one each in France, the UK, Germany, Belgium and Brazil. The largest international connection was to Paris Orly. Sao Paulo Guarulhos was the only top 12 route located outside of Europe. 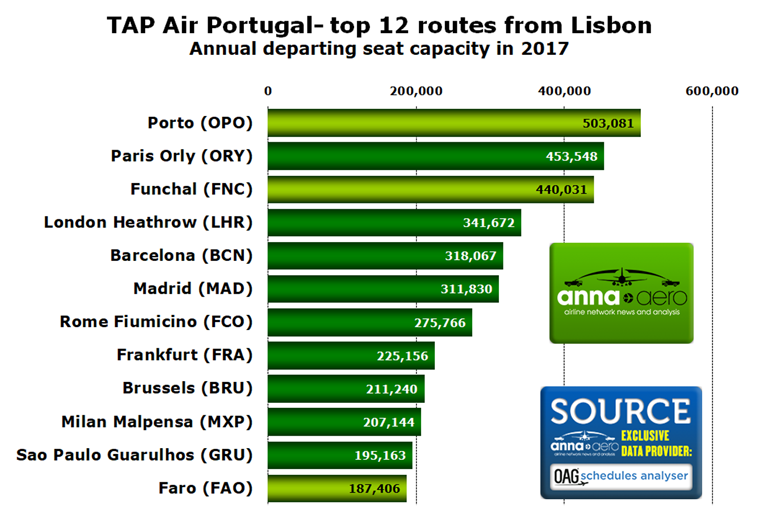 All of the top-ranked routes from Lisbon enjoyed an increase in capacity in 2017, compared to the previous year. The top four routes remain in exactly the same positions they occupied in the table in 2016. The strongest percentage growth came on services to Faro and Frankfurt (28% growth on both routes). Zurich was the only destination to drop out of the top 12 in 2017. The Swiss city was replaced by Faro, despite enjoying an 8.5% increase in capacity itself. The smallest year-on-year increase amongst the top 12 came on the link to London Heathrow, although this route still grew by 4.0%.

TAP offered services to 33 international countries from Lisbon last year. Nine of the airline’s top 12 international markets (highlighted in blue) were located in Europe in 2017. The largest of these was neighbouring Spain, which accounted for 940,000 one-way seats, or 13% of the airline’s international capacity from its home hub. There were flights available to 14 destinations in Spain with TAP last year, although at least two of these appear to have been limited in scope and were not regular scheduled operations. The largest non-European market was Brazil, which is perhaps unsurprising given the historic links between that country and TAP’s home market. The carrier provided links to 10 Brazilian destinations from Lisbon in 2017. 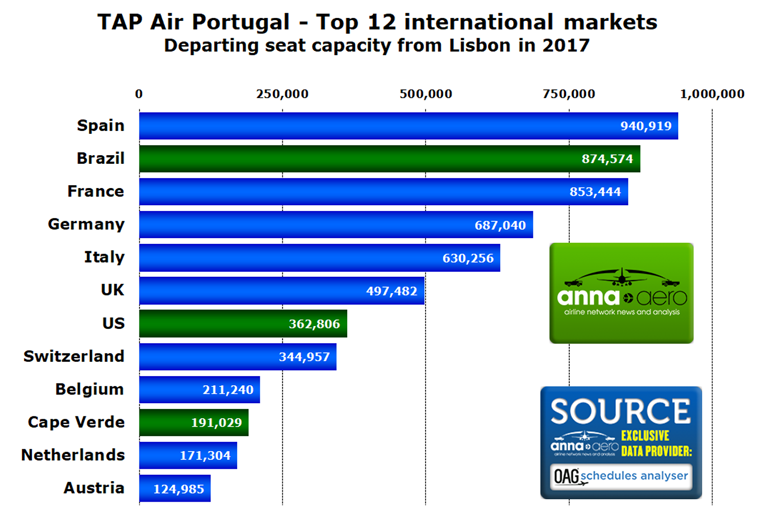 All of TAP’s top-ranked international markets from Lisbon experienced an increase in capacity in 2017. The strongest percentage growth came on services to the US (40% increase), Germany (27%), Austria and Spain (both 23%). The US market was boosted by an increase in comparable annual capacity on services from Lisbon to Boston, New York JFK and Miami in 2017, with the former two routes only launching midway through 2016. Spain replaced Brazil as the leading destination market after the number of seats available to the South American country only increased by 7.0% last year. Angola dropped out of the top 12 to be replaced by Austria, after a 10% decline in annual capacity from Lisbon to Luanda from 2016 to 2017.

anna.aero’s New Routes Database records that TAP is currently scheduled to start one new service during the remainder of 2018, with that being a 10 times weekly link between Lisbon and Florence in Italy. 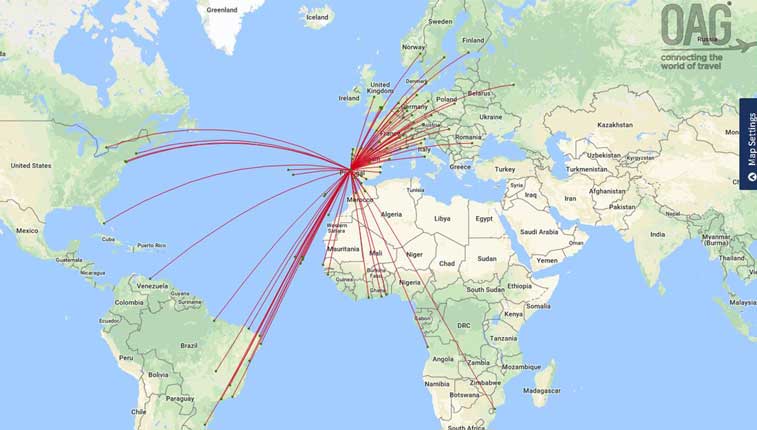 TAP Air Portugal’s route map from Lisbon for the week commencing 17 April gives a clear indication of the high density of destinations served in Europe, with nine of the airline’s top 12 international markets located in that region. The Portuguese carrier also has significant links to Brazil, which was its largest country market in 2016 before being overtaken by Spain last year.