Transatlantic treks between Europe and the Americas; US majors lead the way in S18, London Heathrow tops airport table 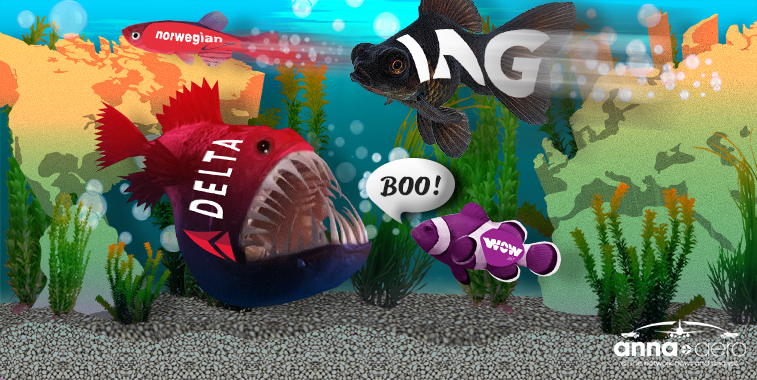 The number of seats on services across the pond will be 5.9% up for a typical peak week in S18, compared to last year. The biggest fish in this market is Delta Air Lines, followed by British Airways, but low-cost, long-haul operators are also creating waves. IAG carriers will account for 13% of weekly available capacity on transatlantic sectors this summer, but this would increase if the airline group followed through with a rumoured interest to acquire Norwegian.

Transatlantic traffic between Europe and the Americas represents one of the most mature and hotly contested long-haul markets in the world. During a typical peak week this summer more than 3.35 million seats will be available between these regions, 5.9% more than during the equivalent week in S17. An analysis of schedule data for the week commencing 31 July 2018 reveals that Delta Air Lines will offer the most departing seats by airline, while London Heathrow tops the airport rankings. Heathrow to New York JFK is the largest route based on available seats.

The US big three (USB3 – Delta Air Lines, United Airlines and American Airlines) occupy three of the top four spots in the transatlantic airline rankings. Between them they will account for 23% of all weekly seats in this market during S18. Delta is the single largest transatlantic carrier, accounting for 8.6% of the available weekly seats on its own. In all, five of the top 20 airlines (highlighted in red) are based in North America (three in the US and two in Canada), with the remaining 15 (highlighted in blue) are based in Europe. The leading European airline for transatlantic capacity is British Airways, which finished second in the rankings. The European carriers that made the top 20 include two from each of the UK, Spain and Iceland. All of the major European flag carriers are represented. The IAG Group accounts for three airlines in the top 20 (BA, Iberia and Aer Lingus) which will offer more than 440,000 seats combined during the week in question, equivalent to about 13% of the available capacity. Of the top 20 airlines in this market, six are members of the Star Alliance, five are members of Skyteam, three are members of oneworld and six remain unaffiliated (Norwegian, Virgin Atlantic Airways, Air Transat, Aer Lingus, Icelandair, and WOW air). 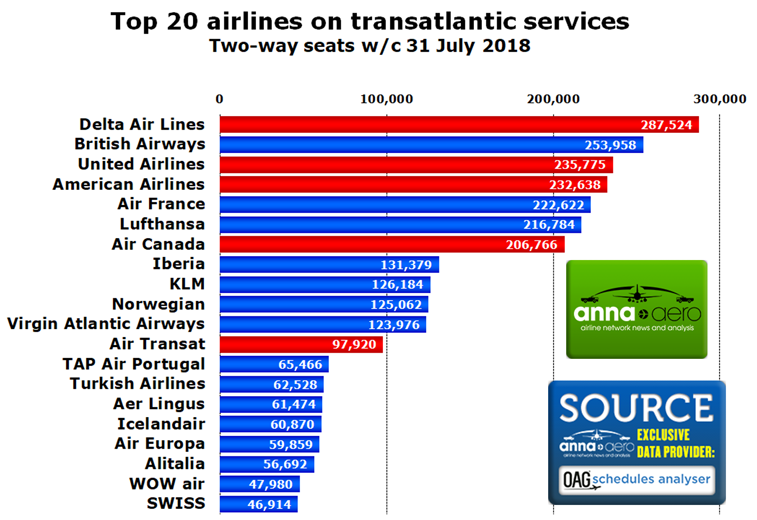 The top-ranked carrier with the highest average capacity on transatlantic services in S18 is Air France with 369 seats available per flight. The airline with the lowest average was Icelandair at 196 seats per departure, emphasising its use of smaller narrow-body types such as the 757 to connect Europe to North America via its hub at Reykjavik/Keflavik. Airlines from Latin (Central and Southern) America and the Caribbean are conspicuous by their absence in the top 20. The highest-ranked carrier from one these regions is LATAM Airlines which finished 21st.

The top 20 airlines that will demonstrate the largest percentage growth on transatlantic services in S18, compared to the equivalent week last year, are Norwegian (77% increase) and WOW air (51%), emphasising the expansion of low-cost long-haul (LCLH) services in this market. WOW air is a new entrant to the top 20 this summer, while Norwegian moves up two places to become the 10th largest transatlantic carrier. anna.aero’s New Routes Database shows that Norwegian has already introduced seven new transatlantic sectors in 2018, and that the airline plans to add a further five routes in this market before the end of the year. The only top-ranked airline that hasn’t increased its capacity is Turkish Airlines, which has marginally reduced its available seats by less than 1.0%.

Heathrow will offer the most departing seats on transatlantic services, with nearly 250,000 available from the London hub during the week commencing 31 July. This represents 7.4% of all departing weekly seats in this market. Unsurprisingly, Heathrow will also see the most weekly transatlantic departures, with 912, which is 167 more than the second placed airport. About 850 of these flights will serve North American destinations. Schedule data indicates that 11 carriers will offer scheduled transatlantic services from Heathrow during the week in question, with BA offering the most with 361 departures. The top six positions in the airport rankings are dominated by the major European hubs, with Heathrow joined by Paris CDG, (third), Madrid (fourth), Frankfurt (fifth) and Amsterdam (sixth). In total, European hubs (highlighted in blue) represent 10 of the top 20 transatlantic origin points, with the other half made up of North American facilities (highlighted in red). New York JFK is the highest placed non-European airport. Eight of the 10 North American hubs are located in the US, but there are also two from Canada (Toronto Pearson and Montreal). 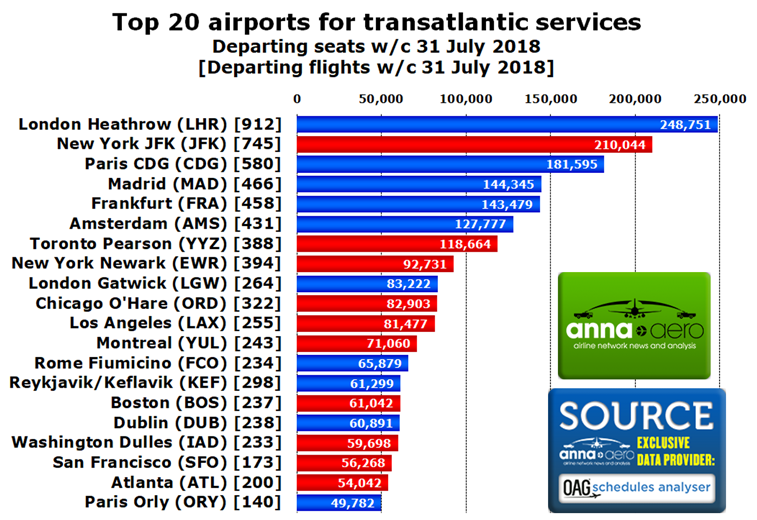 The average capacity on departing transatlantic flights ranged from 356 seats at Paris Orly, to 206 at Reykjavik/Keflavik. Orly will see a number of high density flights operated by Air France, Air Caraibes and Corsair, while the Icelandic airport’s lower average capacity is due to the use of narrow-body aircraft on North American connections by Icelandair and WOW air. The top 20 airports which will see the strongest year-on-year growth in weekly transatlantic seats in S18 are Reykjavik/Keflavik (29% increase), London Gatwick (14%) and Rome Fiumicino (13%). All of these facilities have benefited from the growth in LCLH links to some extent. WOW air has added transatlantic capacity from Reykjavik/Keflavik for S18 while Norwegian has increased its offering from Gatwick and added services from Fiumicino. None of the top 20 hubs are scheduled to see capacity cuts on transatlantic routes in S18.

London is the leading European origin city for transatlantic services in S18. Ten of the top 20 transatlantic routes depart from the UK capital, with nine of these originating from Heathrow. The largest by some distance is the Heathrow-JFK sector, which will offer 78% more seats than the second largest airport pair. OAG schedules show that this route will be operated by four airlines which will provide a combined 140 flights on the sector during the week commencing 31 July. That’s an average of 20 flights per day. The only Gatwick route to make the top 20 is the connection to Orlando, which is the seventh largest transatlantic link in S18. The next largest European origin city is Paris, with five of the top-ranked routes departing the French capital (three from CDG and two from Orly). New York is the main destination for westbound transatlantic services, acting as the arrival point for seven of the top airport pairs (six arrive at JFK and one at Newark). Connections between Europe and the US represent 15 of the top 20 routes, with the remainder including two services to Canada, one to Mexico and two to the Caribbean. The largest transatlantic link from Europe that doesn’t serve North America is the route from Orly to Point-a-Pitre in Guadeloupe. This airport pair will be served by four carriers providing a combined 43 departures during the week commencing 31 July. 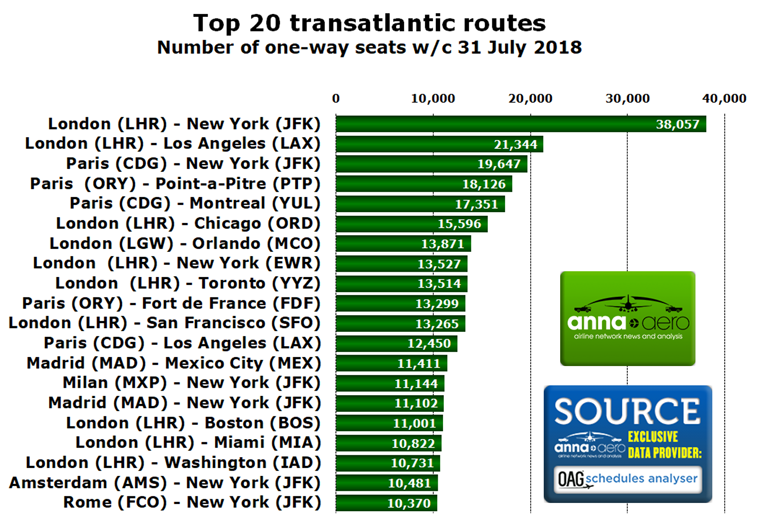 The top 12 country pairs for transatlantic seats in S18 all involve links between Europe and North America. The seven largest markets, and nine of the top 12, link Europe to the US. The biggest by far is the UK-US country pair which will account for more than 290,000 one-way seats during the week commencing 31 July, making it more than twice the size of the second largest market between Germany and the US. The highest ranked transatlantic country pair that does not serve North America is the Portugal-Brazil market, which will be served by nearly 25,000 one-way seats.

For the context of this article, the term transatlantic refers to any services linking Europe to North, Central or South America, or the Caribbean. Routes to the Americas from Africa and the Middle East could also be classified as transatlantic but are not considered here. The data used to summarise a typical peak week in S18 is from OAG schedules for the week commencing 31 July. It is possible that schedules will continue to be adjusted up until the time of operation. Where year-on-year comparisons have been made with 2017, the data for that year is taken from the week commencing 1 August. 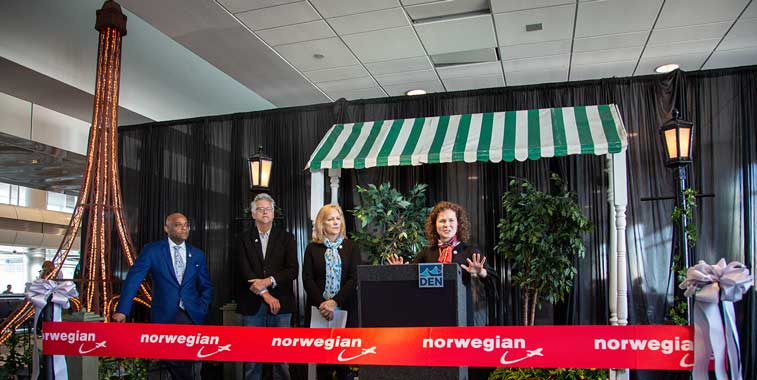 Low-cost long-haul services are becoming a more established element of the transatlantic market. Norwegian and WOW air will witness the largest year-on-year increases in weekly transatlantic seats from S17 to S18. Norwegian has already launched seven new sectors in this market in 2018, including Paris CDG to Denver (pictured above), and plans to introduce at least five more before the end of the year.