In 2018 our data elves have been collating even more interesting statistics on the 136 FTWAs that anna.aero has received so far this year – a bit like any modern day competitive sports on TV. This is mainly so we have more to say in this section of the article. One new metric we are now capturing is the type of aircraft being used by the airlines flying these inaugural services. Way out ahead are narrow-body aircraft which have contributed a whopping 62% of all water arches. The battle for second spot is quite close, with wide-bodies (16%) and regional jets (15%) almost neck-and-neck. Lagging in fourth position are turboprops, with 7% of all entries. It should be noted this week that the winning FTWA had a significant impact, leaping straight into second spot on the 2018 overall leader board. Keep Monitoring!! 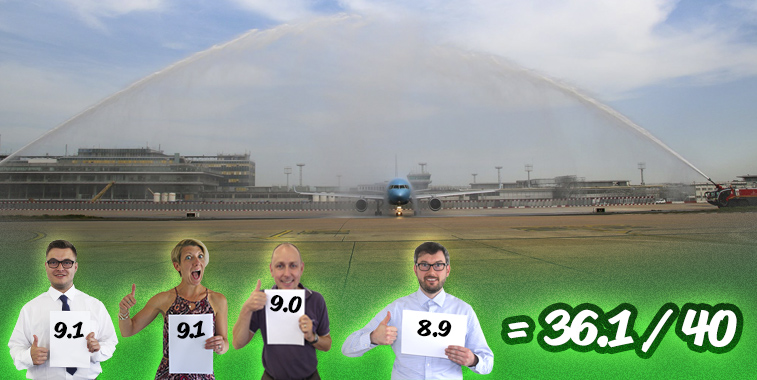 A boutique FTWA for a boutique airline…

Judges’ comments: For those of you that have not heard about La Compagnie so far during its four-year existence, apparently its a self-proclaimed boutique airline. What is a boutique airline? Putting aside the first definition in the dictionary (a small shop selling fashionable items), the second definition is: of or denoting a small specialised producer or business. So now you know… 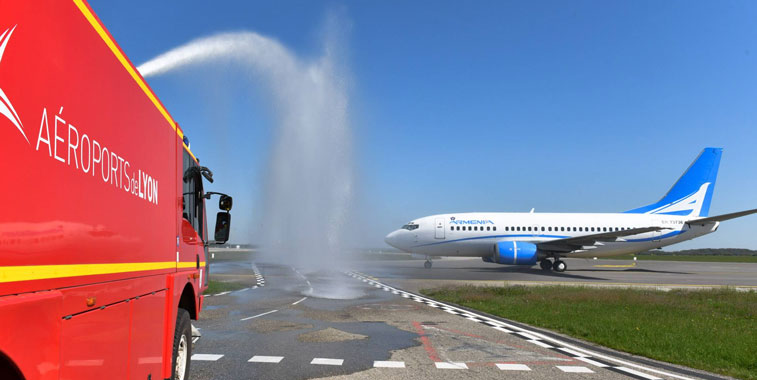 There is absolutely no doubt where this FTWA is from…

Judges’ comments: We love the gratuitous airport branding in this image, however this extreme close-up of the facility’s fire tender has meant that we can’t really appreciate the full glory of the FTWA on display here in Lyon. As a result, we can’t tell if we have a pair of leaping dolphins here…or just a couple of slovenly whales… 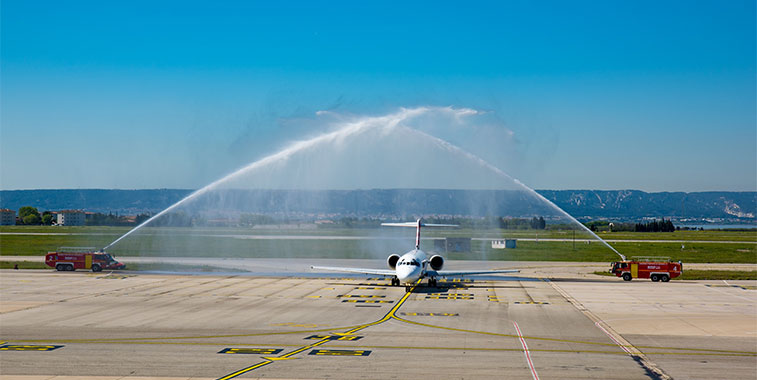 Judges’ comments: Ohhhhhhhh…la la! If only the right-hand tender was five metres further back, we may well have had a perfect pair of leaping dolphins in Marseille. Situated on the Mediterranean coast, you would think that residents of the French city should be well used to seeing these types of cetaceans, however unfortunately these lovely animals are becoming an increasingly rare sight in these waters…boo humans!! 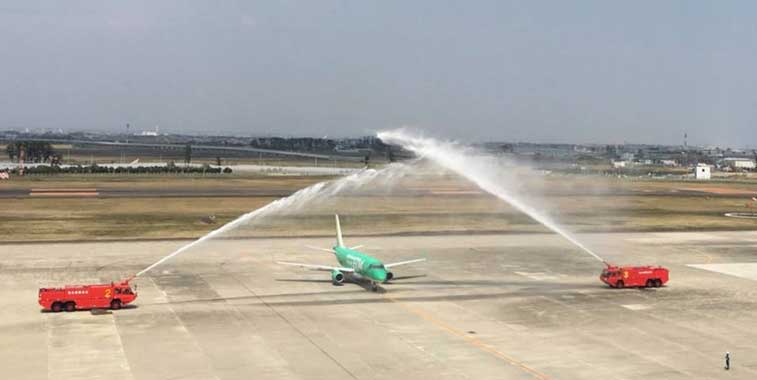 Dream FTWA…or more of a nightmare?

Judges’ comments: This is a first outing in the Arch of Triumph competition for Japanese regional carrier Fuji Dream Airlines. It has also become only the 10th entry that we have received from a regional airline, meaning that this sector of the industry has now contributed 8% of all FTWAs sent in so far in this year’s battle… 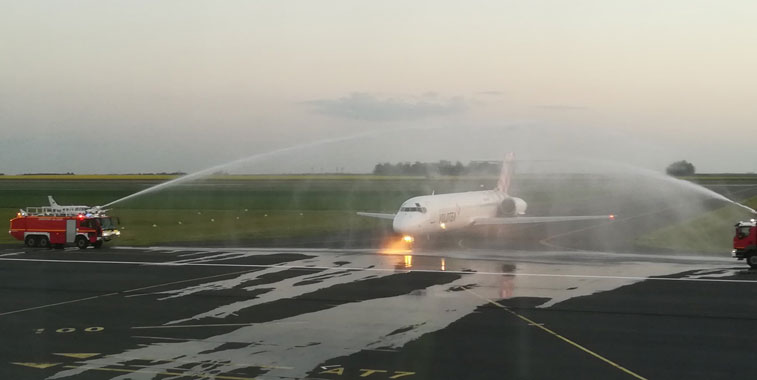 Judges’ comments: This is only the second time that we have received an FTWA from Caen in France. The first time it took part in the Arch of Triumph competition, was in April last year, in part II of the S17 public vote, again with a Volotea route launch – that time from Toulouse. Looking back at that feature from last year, the airport’s firefighters didn’t make into the top nine FTWAs, as voted for by the general public…at least this week they have made it into the top eight… 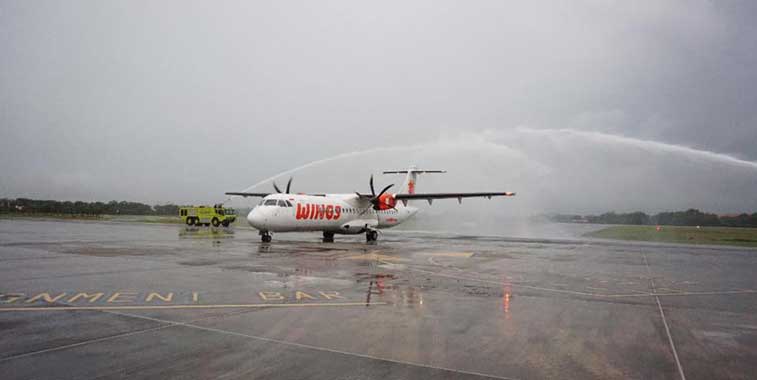 A downpour…or just lots of practicing??

Judges’ comments: Hang on I was just talking about the handful of FTWAs we have had from regional airlines…and then we go and get another one!! Let’s talk about number of turboprop water arch we have received this time then…which with the one above has now climbed to a total of 10. 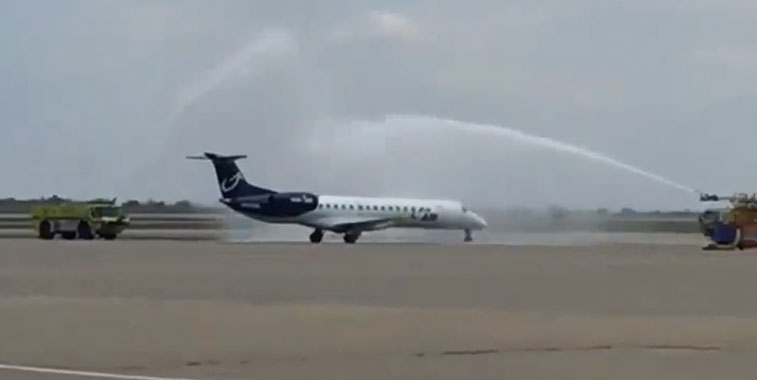 This image is a blurred…not blurry enough to hide the FTWA unfortunately!!

Judges’ comments: You’ve got to be kidding me – a third regional carrier FTWA. Just when writing this article, this sector of the airline world has seen its share rise to 9%. What happened to the left-hand tender? Did it run out of water?? Did it peak too soon…or did it not peak at all?? 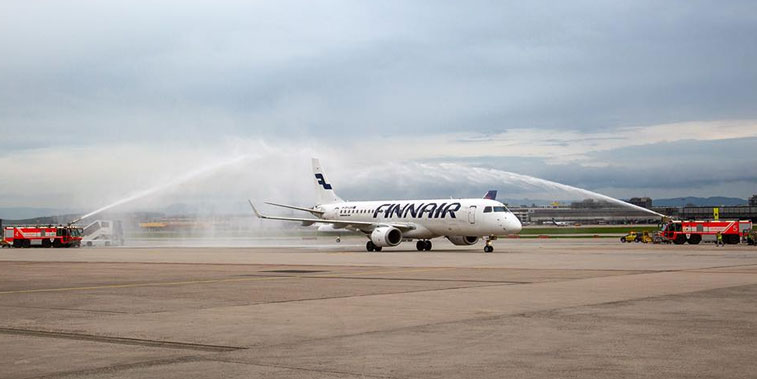 Maybe the firefighters got the wrong Embraer aircraft??

Judges’ comments: The above FTWA is pretty flat as far as the anna.aero judges are concerned. Perhaps the German airport’s firefighters got out their aircraft recognition book…searched for Embraer…saw a picture of the smaller ERJ-145…and decided that must be the aircraft performing the first flight…and not the larger E170. That would be one explanation for this ‘pancake’ of a water arch…