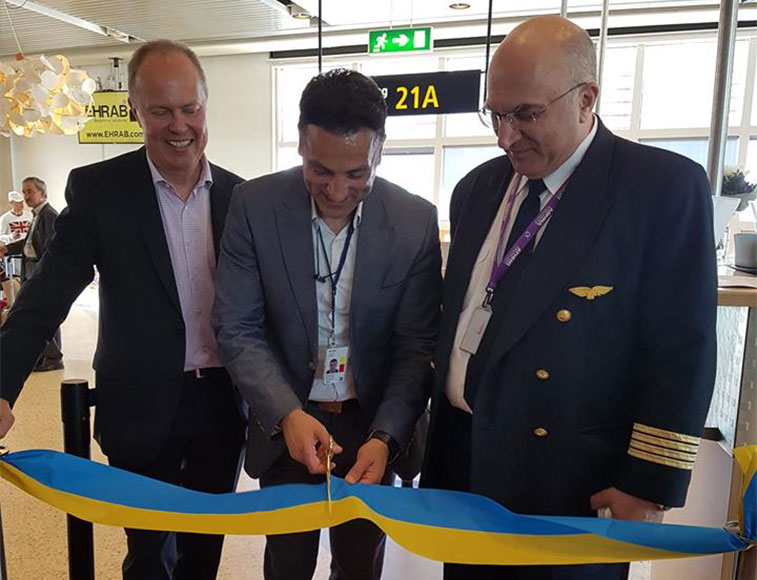 Wings of Lebanon started a route from Beirut to Gothenburg last June, contributing to the Middle East airport’s 8.3% annual growth in 2017. The carrier will also help fuel this year’s passenger increase, as it intends to add a weekly sector to Billund from mid-June.

Beirut Airport is the only commercial gateway for the Middle Eastern nation of Lebanon. The facility is currently served by 44 airlines, up from the 38 carriers which flew to Beirut in the same week of 2017, with considerable change in this total. Since last April, 10 new airlines have begun operating to the Lebanese capital city – namely Transavia, Aigle Azur, Vueling, Atlasglobal, flynas, SAS, Finnair, Wataniya Airways, Fly Baghdad Airlines and Cyprus Airways. Lost from the airport’s airline roll call over the past 12 months were: Ukrainian-Mediterranean Airlines, Rotana Jet, Borajet and Cham Wings Airlines. The gateway is offering 53 non-stop destinations in April 2018, down from 56 last year. Added to Beirut’s network in the last year have been Paris Orly and Helsinki, with the loss of Stockholm Arlanda, Kiev Boryspil, Kharkiv, Kamishly and Alexandria from the route map.

Average growth of 8.2% over last decade

Unlike many airports over the last 10 years, Beirut has consistently grown year-on-year since 2008, averaging 8.2% in that period, peaking at 22% in 2008-2009, with its low being the marginal performance recorded between 2010 and 2011. With 10.78 million scheduled two-way seats available in 2017, this would imply an overall load factor at the airport in excess of 76% last year. This is third best load factor result during the period analysed, which peaked at 79% in 2015. 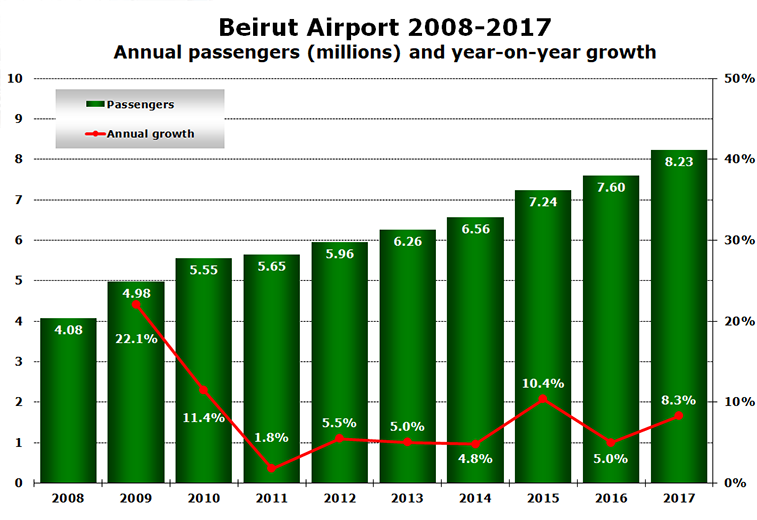 Unsurprisingly, Middle East Airlines is the lead carrier at Beirut, its home base. However, the #1 airline is only posting marginal growth over the last 12 months, up just 0.6% on the same week last year. Overall capacity at the airport has climbed by 5.8% year-on-year, and has just crept above the 100,000 weekly seats mark. The top 12 airlines have gone unchanged in the past 12 months, although their respective rankings have altered a little. The top four carriers are in exactly the same spots, but it is Iraqi Airways that has made strides up the standings, leaping from last year’s ninth position to fifth in 2018 as a result of its 55% capacity increase. Alitalia and Lufthansa have traded places, with the Italian carrier’s 13% annual growth helping it to jump over the German airline, which tweaked down its commitment to Beirut by 2.2%. 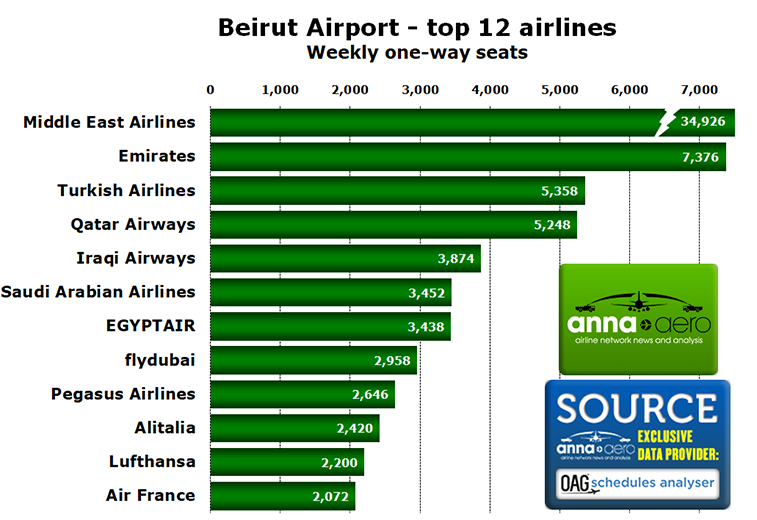 The top 12 airlines commanded 75% of weekly seats in the week commencing 27 April this year, down from the 78% tally they achieved in 2017. There were three carriers inside the top 12 which posted annual seat declines, led by Turkish Airlines, which trimmed its capacity to the Lebanese airport by 7.1% since last April. Three carriers went unchanged in the time period analysed, these being flydubai, Pegasus Airlines and Air France.

The #1 city pair from Beirut is to Dubai, a route which is flown 56 times weekly by the three incumbents – Emirates, MEA (both three times daily) and flydubai (double-daily). Since last April the airport’s busiest sector has seen a capacity increase of 6.9%, so clearly there is still additional demand for the serving airline’s to capture. The top 12 routes controlled 67% of weekly seats in 2018, up from the 65% result they provided in the same week a year ago. 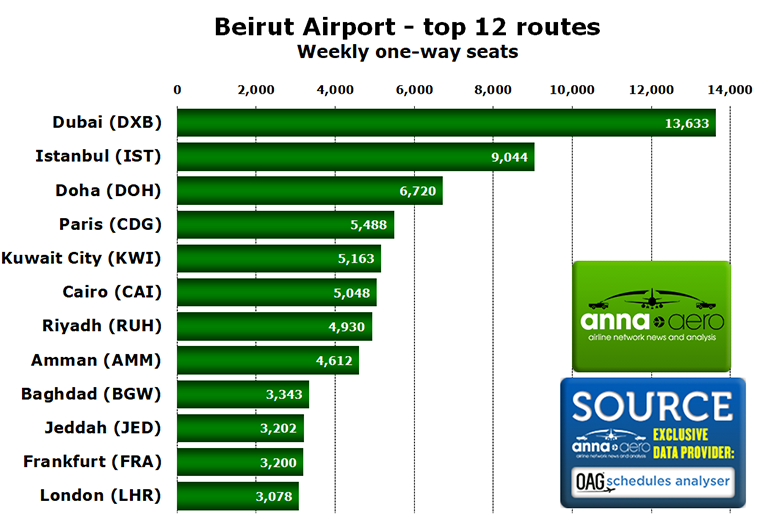 The top five sectors are in exactly the same spots they were in 2017, but below that there has been some flux. Last year’s #12 route – to Istanbul Sabiha Gökçen –  has dropped out of the rankings in 2018, having been replaced by Baghdad, which was in 15th position last year. The link to the Iraqi capital city has risen by 68% year-on-year, making it the top performing sector, just ahead of Cairo, which posted a far from sluggish 63% spike in weekly seats. Only three airport pairs witnessed a drop in weekly seats, these being Jeddah (-1.5%), Frankfurt (-5.0%) and London Heathrow (-7.1%). 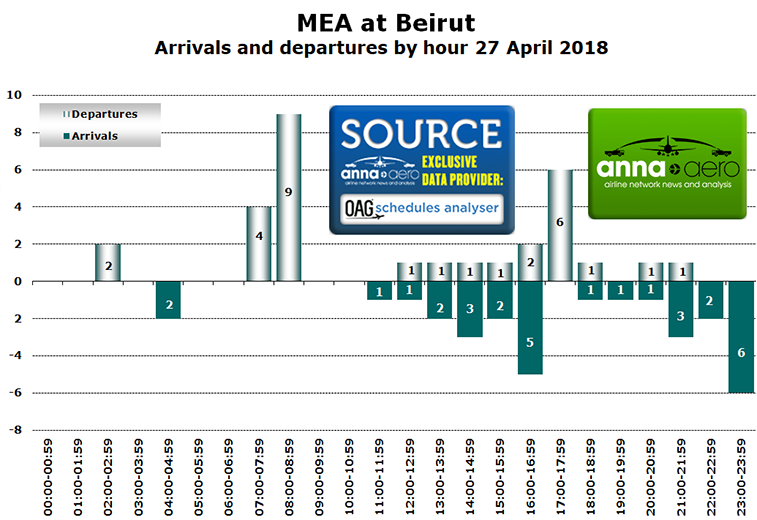 Looking ahead and consulting anna.aero’s New Route Database, Beirut can expect some fresh capacity this summer. Aigle Azur is planning to commence a twice-weekly seasonal service (until early September) from Marseille on 12 June, a few days later Wings of Lebanon will start a weekly operation to Billund, before MEA begins a three times weekly route to Madrid. Towards the end of June Aegean Airlines will add seasonal links from Heraklion, Mykonos and Rhodes to Beirut, and then in July Air France will commence flights from Marseille and Nice. In W18/19, Transavia will add a twice-weekly operation from Amsterdam in November. 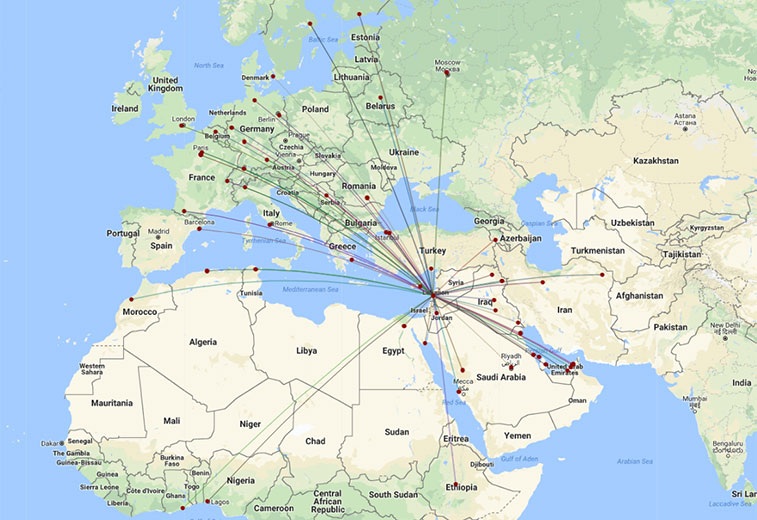