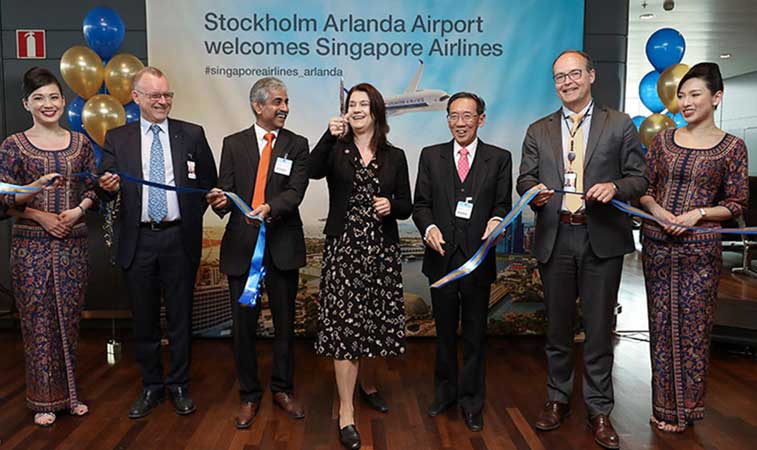 Singapore Airlines carried 19.45 million passengers across its network in 2017, an increase of 2.9% compared to the previous year. After a significant fall in traffic in 2009, the airline has gradually recovered its passenger numbers following eight consecutive years of growth. One new market opened by the carrier in 2017 was Sweden, with flights to Stockholm Arlanda commencing from 30 May.

Singapore Airlines is a Star Alliance member, and was established under its current name in 1972. ch-aviation shows that the airline operates an all-wide body fleet comprised of A330-300s (21 active aircraft), A350-900s (21), A380s (17), 777-200s (16), 777-300s (31 – including 26 ER variants) and 787-10s (two). The airline’s cargo division operates seven 747-400 freighters. The Singapore Airlines Group also includes full-service operator SilkAir and LCC Scoot, but since these carriers operate under their own separate IATA codes, this analysis only considers passengers flown and capacity published by the mainline Singapore Airlines operation.

In 2017 Singapore Airlines welcomed 19.45 million passengers across its network, 1.6% more than it flew in 2008. This paints a picture of a static network but in fact, the ten years from 2008 to 2017 began with significant cuts, before an extended period of slow and steady growth, which saw passenger numbers finally recover to 2008 levels for the first time last year, before going on to marginally exceed those numbers. In 2009 passenger numbers slumped by 15% to 16.32 million, with two-way capacity cut by 12%. This was most likely due to the global economic downturn. Since then traffic has steadily recovered with eight consecutive years of growth. From 2009 to 2017 passenger numbers increased by 19% with an average year-on-year growth rate of 2.2%. There were several years of very marginal increases, with growth of less than 1.0% experienced in 2014, 2015 and 2016. The largest single year-on-year increase in passenger numbers took place in 2012 with traffic growing by 6.8% compared to 2011. 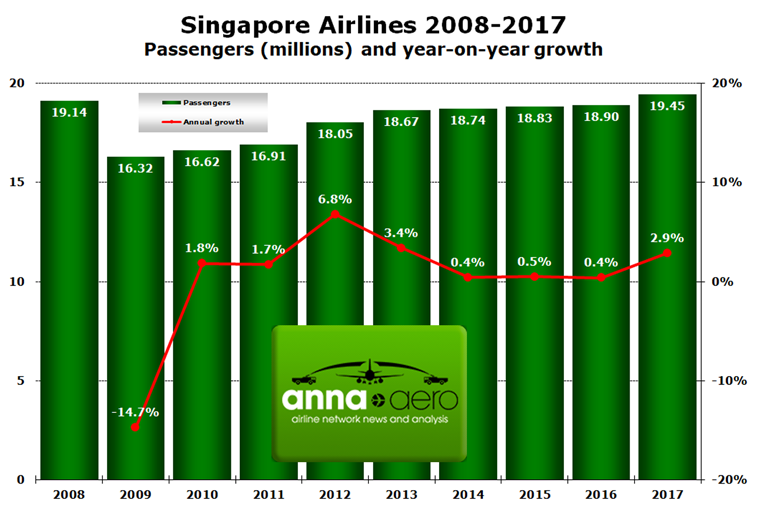 There were, on average, 324 seats on departing Singapore Airlines services in 2008. This average capacity has been in gradual decline and had fallen to 291 seats in 2017. During this period the carrier phased its 747-400s out of its passenger operations, although there was a corresponding increase in the seats provided by A380s. The main reason for the decline in average capacity seems to have been a slight increase in the overall percentage of seats provided by medium-sized wide-body types such as the A330-300, rather than ultra-large aircraft such as the 777-300ER and A380.

Singapore is the airline’s main and only hub and accounted for 47% of its departing seats in 2017. OAG data show that the airline is scheduled to operate 792 departures from Singapore during the week commencing 1 May 2018, with the number of daily flights ranging from 110 to 117. The whole of the carrier’s network is focused on its main hub with all flights either departing or arriving directly, or originating from or terminating at Singapore as part of one-stop itineraries. Examples of indirect links include those to New York JFK and Houston Intercontinental, which operate from Singapore via Frankfurt and Manchester respectively.

Singapore Airlines’ largest direct route from its home hub last year was Jakarta, which accounted for nearly 840,000 annual one-way seats. During the week commencing 1 May 2018 the airline will operate 58 flights to the Indonesian capital, with between eight or nine daily departures. Its top five routes in 2017 all linked Singapore to other destinations in the Asia Pacific region. In total, the top-ranked routes included four Australian destinations, two in Indonesia and one each in Hong Kong, Thailand, China, UK, Philippines and South Korea. The top 12 routes accounted for 53% of the airline’s departing seats from its home hub in 2017. London Heathrow was the only top 12 destination outside of Asia Pacific, finishing in sixth position. Singapore Airlines will operate 28 flights to Heathrow during the week commencing 1 May, with four daily departures on this airport pair. 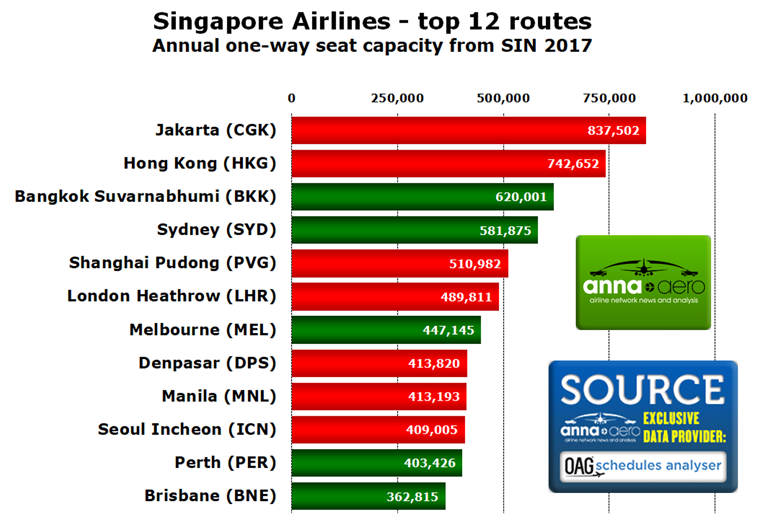 Five of the top 12 routes saw an increase in annual capacity on services from Singapore in 2017, including all four Australian airports. The strongest growth came on the links to Sydney (7.2% increase in seats), Melbourne (6.2%) and Brisbane (5.2%). The capacity on the Perth connection saw only a very marginal increase. The top six routes remained in exactly the same positions in the rankings that they occupied in 2016. The only new addition to the top 12 was Brisbane which replaced Beijing in 12th position after the Chinese capital connection saw a slight (0.4%) drop in seat numbers. Seven of the top-ranked routes (highlighted in red) witnessed a reduction in capacity in 2017, with the largest cuts coming on the links to Jakarta (down 6.7%) and Heathrow (down 5.2%).

Land Down Under tops the charts

Australia was by far the largest destination market for Singapore Airlines in 2017, accounting for 17% of its available departing seats from Singapore. The carrier provided regular scheduled flights to six Australian airports last year. In total, 10 of the top 12 international markets can be classified as Asia Pacific countries. The only two countries from outside of this region are both in Europe, with the UK finishing in eighth position and Germany in 12th. Schedules show that the carrier operated to two UK airports and three in Germany in 2017. In total the top 12 country markets accounted for 82% of the airline’s available seats from Singapore last year. 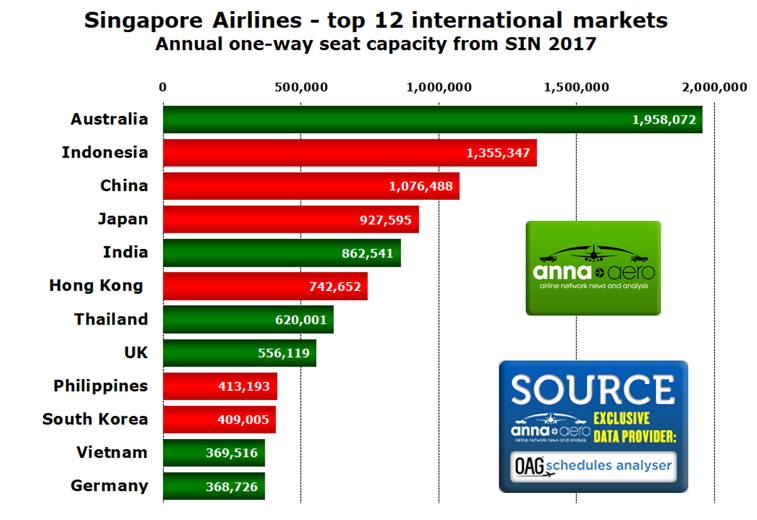 The markets making up the top 12 in 2017 were the same as in 2016, with the top 10 occupying exactly the same positions. The only change in ranking positions was Vietnam overtaking Germany to claim 11th position. Half of the top 12 country markets experienced an increase in annual capacity from Singapore in 2017, with the strongest percentage growth coming on services to Australia (6.2% increase) and the UK (5.1%). Capacity in the latter market enjoyed a boost, despite a cut in seats on the Heathrow link, thanks to an increase on the Manchester sector. Six of the top markets (highlighted in red) saw capacity cuts last year, with the largest reductions coming on services to Indonesia (4.4% down) and Japan (4.1% down). 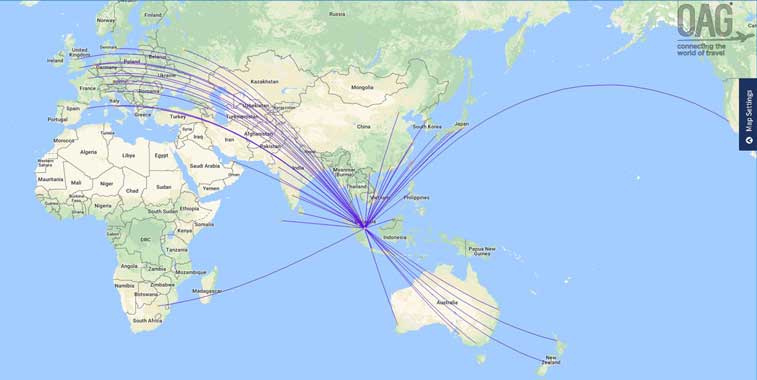 Singapore Airlines’ route map from its home hub highlights the carrier’s connections within Asia Pacific. Ten of its top 12 country markets were within that region in 2017, with Australia the largest single destination market, accounting for 17% of all departing seats last year. The carrier also offers direct connections to Europe and the West Coast of the US.