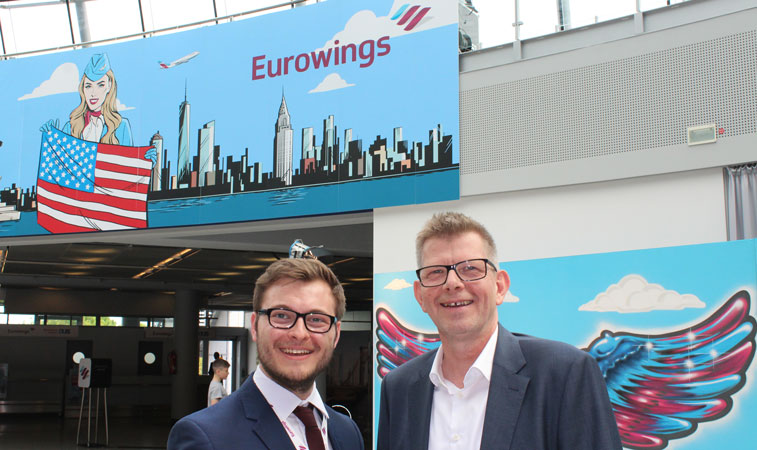 anna.aero’s Assistant Editor, Jonathan Ford, met with Eurowings CEO, Thorsten Dirks, at the carrier’s celebratory event for its New York JFK launch at Düsseldorf Airport on 27 April. “We’ve managed to build up a completely new long-haul flight operation in Düsseldorf within a matter of five months,” commented Dirks to anna.aero.

On 28 April Eurowings commenced flights to New York JFK from Düsseldorf, a route that the carrier will operate six times weekly using its recently inherited A340-300s, operated by Brussels Airlines. The day before the inaugural flight, Eurowings held an event to celebrate and promote its new US services from the German hub, with it also planning to commence routes to Miami and Southwest Florida respectively. Flights to Miami begin 4 May, while Southwest Florida services will commence the day before. The latter route was served by airberlin until its demise, a service and destination which is popular with the German market. Between January and September last year, airberlin carried 61,568 passengers on the route from Düsseldorf according to the Bureau of Transportation Statistics, meaning that the airline recorded a theoretical load factor of 71% during the nine-month period last year. Along with the three routes being launched over the next few weeks, Eurowings will also offer long-haul services to Cancún and Punta Cana this summer according to OAG schedules, with the Mexican resort service starting 30 April. For the winter, the carrier will add further long-haul routes, including Havana, Montego Bay and Mauritius, to its Düsseldorf network.

“We’ve managed to build up a completely new long-haul flight operation in Düsseldorf within a matter of five months,” commented Thorsten Dirks, Lufthansa Board Member and Eurowings CEO, with the company taking over a valuable business opportunity since the demise of airberlin last October. “This is an organisational masterstroke achieved in record time which no-one else in the aviation industry is going to be able to copy right now. It also proves what an enormous amount of long-haul expertise Brussels Airlines is bringing with it to our Eurowings Group.” The Belgian flag carrier helped prepare the long-haul programme, with it operating the two A340-300s which have joined the Eurowings fleet. This summer Eurowings will operate over 40 aircraft from Düsseldorf, with them flying more than 760 weekly departures a week to 95 destinations in Germany, Europe and around the world.

A couple of weeks before the US route development celebration party, anna.aero’s Jonathan Ford was invitied by Ivan Orec, Senior Manager Network Development & Airport Relations at Eurowings to come to the event. So having just got home from Routes Europe a few days before, Ford washed and repacked his bag before finding himself on his way to Düsseldorf from Birmingham. 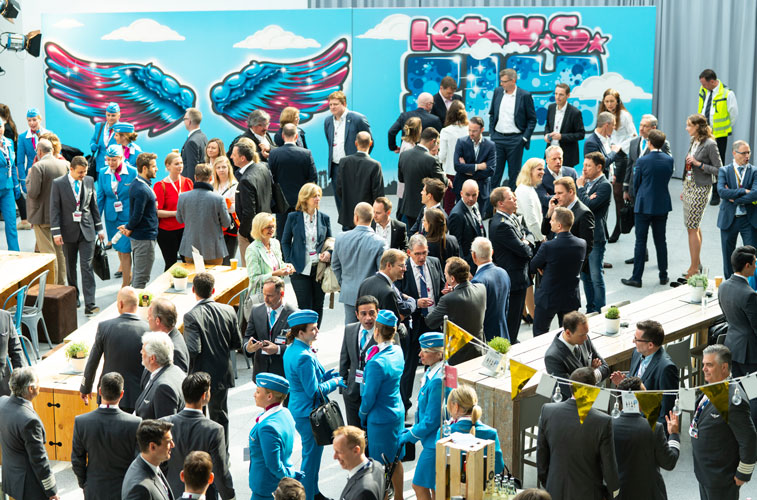 Hundreds of airport, airline, travel trade and media representatives turned up to celebrate the opening of US flights with Eurowings from Dusseldorf, with the carrier using the promotional slogan of ‘Let U.S fly’ to promote the occasion. As people gathered and were getting settled, a musical performance by Bubble Beatz began, with a dancing flash mob breaking out also. The musical encompassed genres and dance moves associated with the hip-hop and break dancing scene that is associated with urban areas of New York. While the entertainment was being enjoyed by Eurowings’ guests, a selection of US-inspired food and drink offerings were provided, including donuts, nachos and pastrami sandwiches. A array of fine wine was also on offer to quench people’s thirsts. 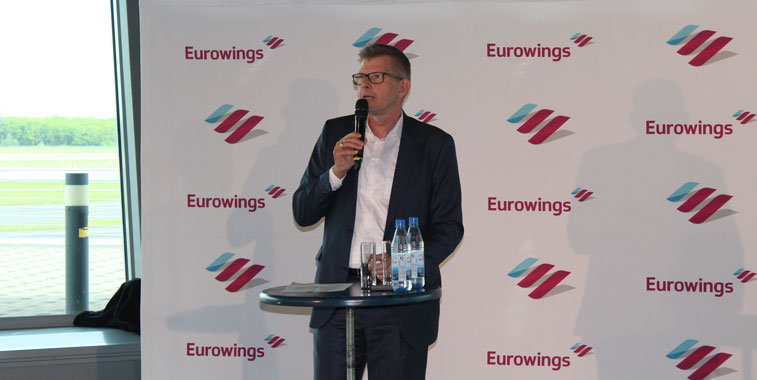 Once the flash mob and street performers had completed their routines, it was then time for the press conference to begin. First to speak was Eurowings CEO Thorsten Dirks. “We’ve managed to build up a completely new long-haul flight operation in Düsseldorf within a matter of five months. That’s an organisational masterstroke achieved in record time which no-one else in the aviation industry is going to be able to copy right now.” 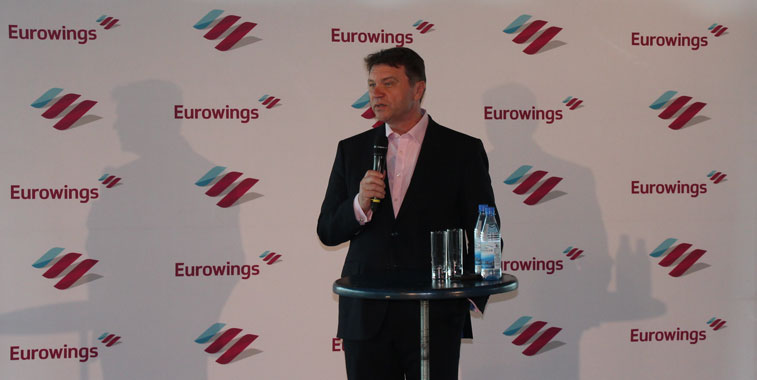 After Dirks had spoken, it was then time for Dusseldorf Airport CEO Thomas Schnalke to take to the stage. “The signs at Eurowings point to further growth. In recent months, following the exit of airberlin, the airline has significantly expanded its flight offering in Düsseldorf and now has around 40 aircraft based here. With the launch of the connection to JFK, we’re celebrating the start of the newly added US routes which the airline has restored to the summer flight schedule for the people of the Rhine-Ruhr region. There are plans to add further attractive long-haul destinations in the coming winter. This means that Eurowings remains far and away the largest strategic partner at our airport.” 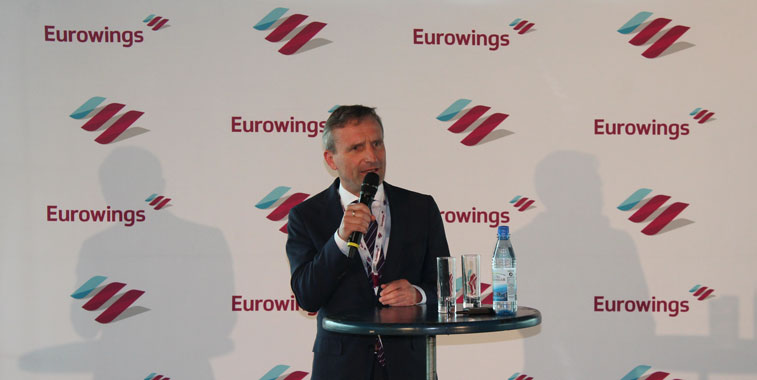 Along with the airport and airline CEOs, also taking the opportunity to speak at the event was Dusseldorf Mayor, Thomas Geisel. “Our airport is North Rhine-Westphalia’s gateway to the world and one of the pillars of economic prosperity for the city and the region. The expanded flight offering from Eurowings means that we have fast access to the whole world. In addition to the other long-haul destinations still to come, the new connection to New York expresses how international our city is,” commented Geisel. Once the speeches were complete, it was then time to head out to the A340-300 parked on the apron to see the new Eurowings BIZclass product, plus to have a photo shoot further promoting the US routes. 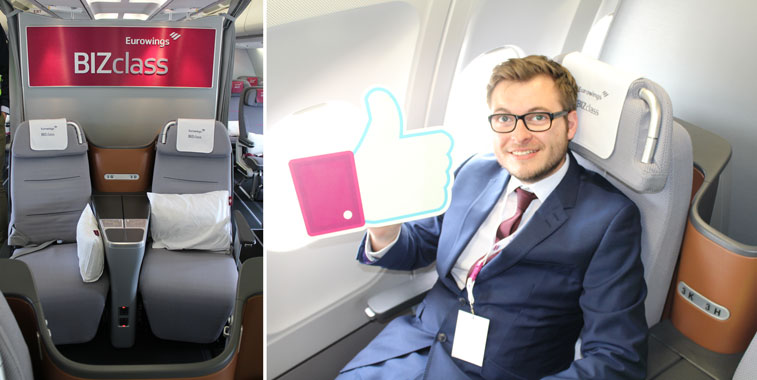 The 27 April was the time that journalists, airport and some airline staff managed to see the new business class product offering of Eurowings up close, named BIZclass. The product certainly got a thumbs up (or Facebook like) from anna.aero’s roving reporter Jonathan Ford. The class offering will be available on all flights to the US this summer from Düsseldorf. 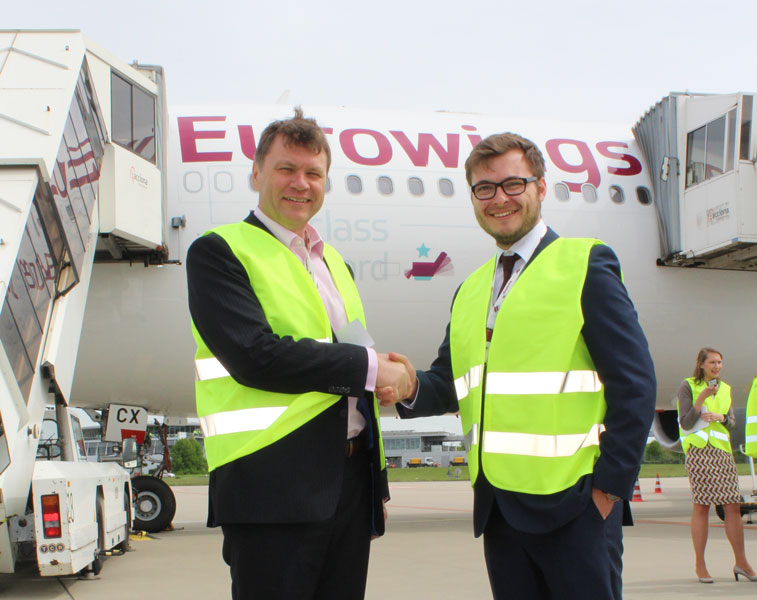 Sealing the deal on the advanced long-haul S18 programme of Eurowings are Thomas Schnalke, CEO of Düsseldorf Airport, and Jonathan Ford, Assistant Editor, anna.aero. Also visible in this shot is the promotional livery for the Eurowings BIZclass product, with it highlighting the section of the fuselage where the cabin is located on the aircraft. As part of the major network restructure of Eurowings from Düsseldorf, the airline invited all crew to the event who wanted to come and join in on the celebrations, with over 100 turning up. This helped to create this impressive group shot which promotes the new routes. Along with New York and Miami, Eurowings will also pick up the route to Southwest Florida which was lost as a result of airberlin’s demise. Eurowings will fly the route three times weekly, a frequency which should easily support the demand of over 61,500 passengers which used airberlin on the route during the first nine months of 2017. 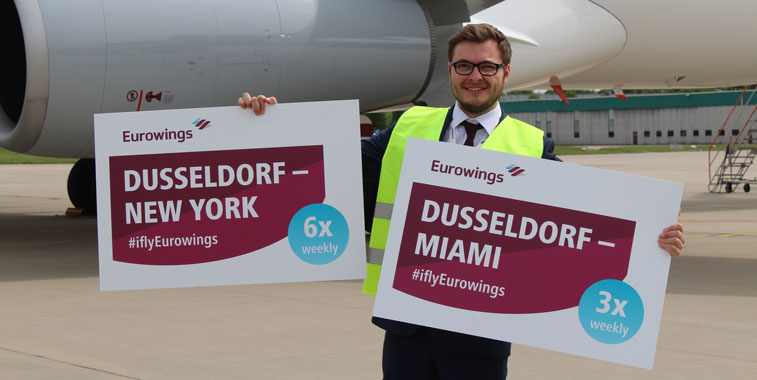 Eurowings will operate between Düsseldorf and New York JFK six times weekly, while Miami flights will see a three times weekly service. The second route to Florida, Southwest Florida, will be also be flown three times weekly. As the crew beautifully highlighting the launch of the latter route, anna.aero’s Jonathan Ford thought he would try his best to push the JFK and Miami routes. Probably best that the crew picture is chosen for the promotional adverts… Just before the end of the launch celebration, anna.aero’s Jonathan Ford managed to catch up with Markus Leopold, Regional Manager UK & Netherlands for Eurowings. The duo can be seen chanelling their inner hip-hop at the event, with them also promoting the Eurowings marketing campaign of ‘Let U.S. fly’, shown on the back of Ford’s hi-visibility jacket. Ford would like to thank Eurowings, in particular Ivan Orec, Senior Manager Network Development & Airport Relations at Eurowings, and Leopold, for helping arrange for Ford to come to the event.