As we mentioned last week, our data elves have been collating even more mind-blowing statistics on the 145 FTWAs that we have been sent in during 2018. One new metric we are now capturing is the type of business model (low-cost, full service etc.) being used by the airlines flying these inaugural services. The stand-out market segment receiving an FTWA is the low-cost sector, which has been baptised 69 times (48%) so far in 2018. Not far behind are full-service carriers (quite often national flag carriers) which have claimed 40% of all entries. Lagging behind are regional airlines (13 entries; 9%) and in fourth (and last)  position are leisure airlines (five entries; 3%), a segment which was present this week. Condor, the German leisure airline, now joins Edelweiss Air (three entries) and SmartWings (one) as carriers to have been immortalised in Arch of Triumph glory. Keep Monitoring!! 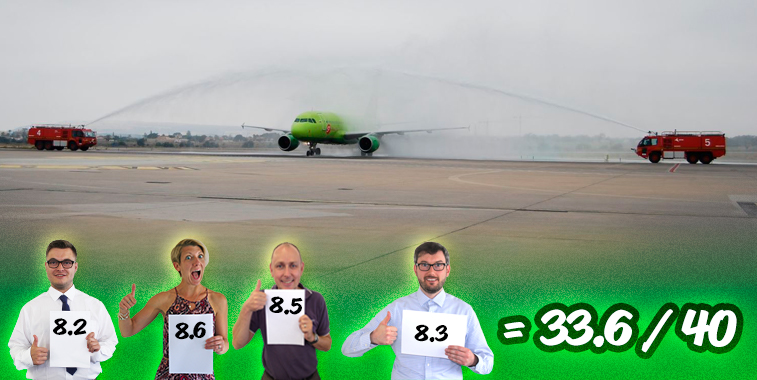 Similar to the other S7 Airlines FTWA received this week…we seem to have lost some tenders in mainland Spain too!

Judges’ comments: If both of these tenders had moved about 10 feet forward then still attempted to get the water jets to meet neatly over the S7 Airlines aircraft, we might have had something more from this FTWA, rather than just a weekly win – perhaps a table-topping performance. Instead the Spanish airport will have to settle for seventh spot. That said it is the third consecutive year that Alicante has made it onto the leader board – having achieved 14th position last year, and 15th in 2016…so maybe 13th place beckons this time… 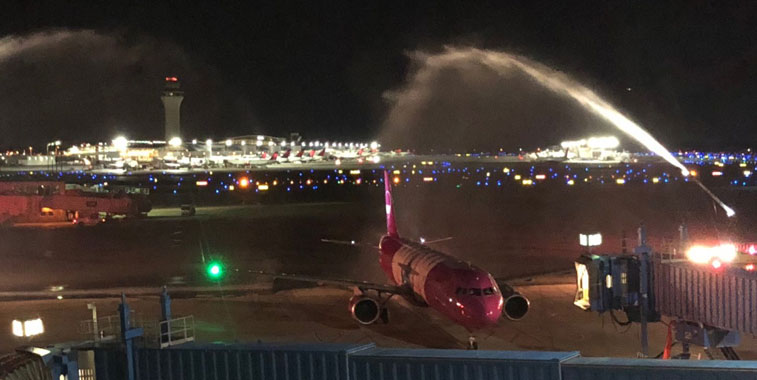 Clearly this is not from the official photographer…was he busy?

Judges’ comments: Clearly when you are introducing your seventh service to Europe, you no longer need to make the effort any more when a new service starts. A half-hearted picture of a half-hearted FTWA with lots of apron clutter. Where are the balloons? Where is the cake? Where is the proper photographer? Where is the effort? Oh…they’re inside…oh right… 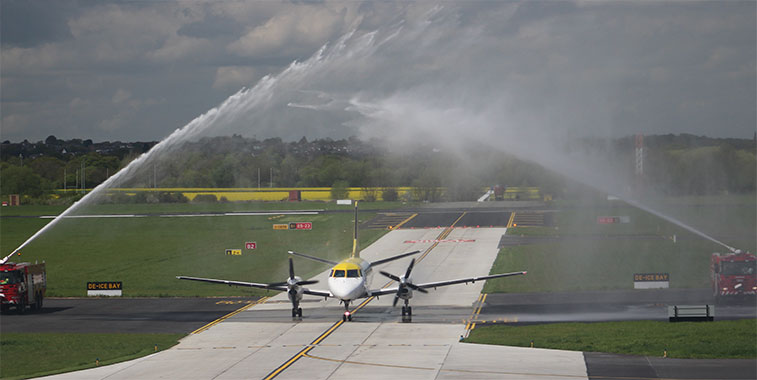 Is it easier to perform an FTWA with the tenders parked like that…rather than head on?

Judges’ comments: We’re getting close to 150 FTWAs so far in 2018, and yet this is only the 11th (8% of total) that we have had featuring a turboprop aircraft. This type of aircraft has not had much success in the competition, with very few wins to speak of. However, let’s not forget that a Royal Air Maroc ATR 72 was the first winner of the annual battle, scooping the first ever Arch of Triumph title in 2013… 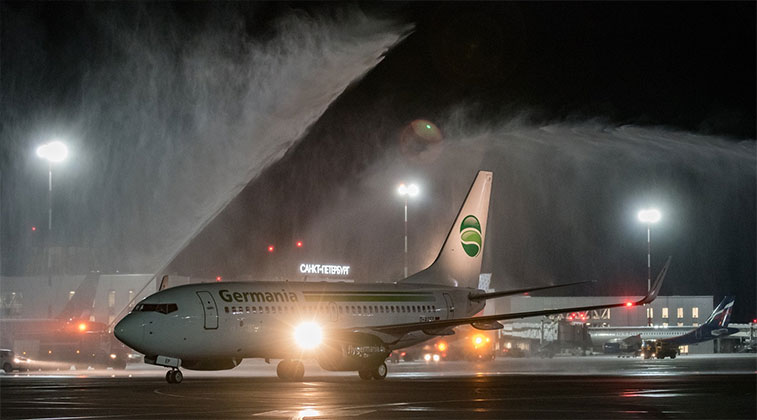 A brave effort of a night-time FTWA…

Judges’ comments: This is an FTWA of firsts. It is Germania’s first route to St.Petersburg and indeed Russia. It is the first FTWA received by the airline so far this year. And it is the first entry that we have received from Russia’s second city airport in 2018. And with a score of 23.4, unfortunately that’s where the firsts run out for this water arch… 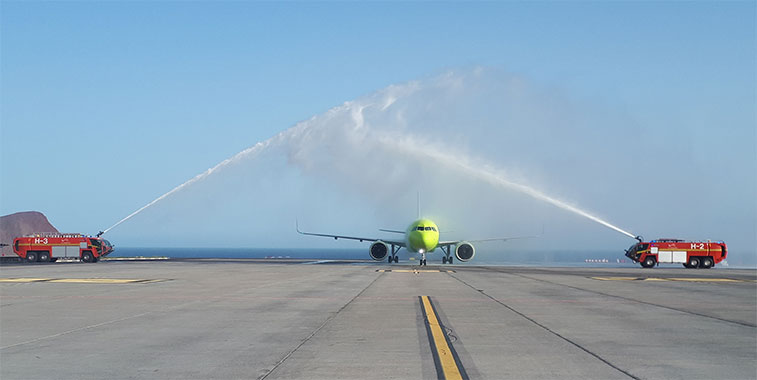 Judges’ comments: If you could organise the perfect weather for an FTWA ceremony at your airport…what we have on display here in the Canary Islands is bang on. However, one feature of the climate in this south-west tip of Europe are the strong winds…which seem to be having an impact on the water jets above… 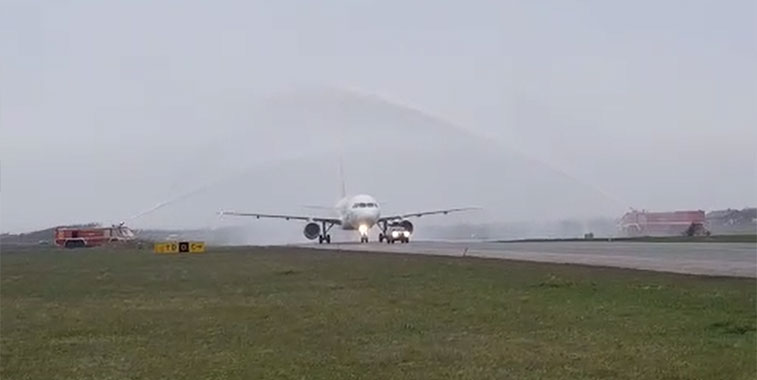 Judges’ comments: For those of you that don’t know, Condor is a German leisure airline, specialising in transporting holidaymakers to sunnier spots overseas, typically around the Mediterranean, Canary Islands, North Africa etc. However this FTWA has been arranged for its first ever domestic route in its 62-year history. You would have thought with that amount of time to get it right…it might have received a better water arch… 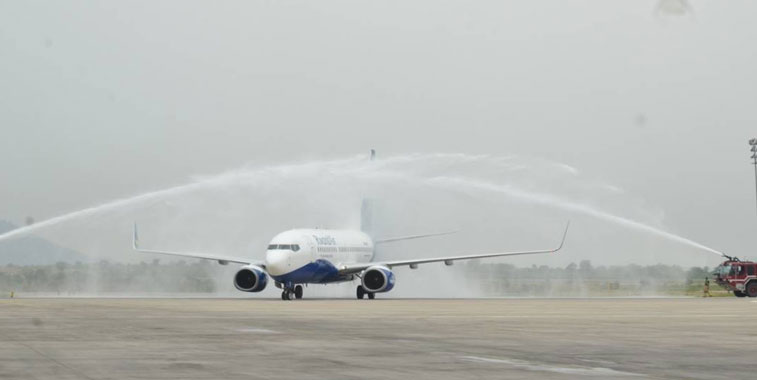 Judges’ comments: This FTWA is about six feet from becoming the first winning water arch for an African airport so far this year. However, the resulting Arch of Triumph entry is a bit flat and has pancaked – a technical term often used in this column. Apparently a Nigerian pancake is quite different from a regular pancake. The ingredients consist of sugar, pepper and onion, which gives the pancake a sweet, slightly spicy and savoury taste…yummy!

Judges’ comments: The more observant of you might have thought…those guys at anna.aero don’t know what they are talking about…how can they put this service originating in Newark and not Rzeszow! Let us tell you why. The flight actually leaves Warsaw Chopin to the US hub and then ‘inside Ws’ back into Poland, arriving in Rzeszow. The aircraft then hops back to Newark before returning home to Chopin airport. So now you know why we have written the airports that way around… 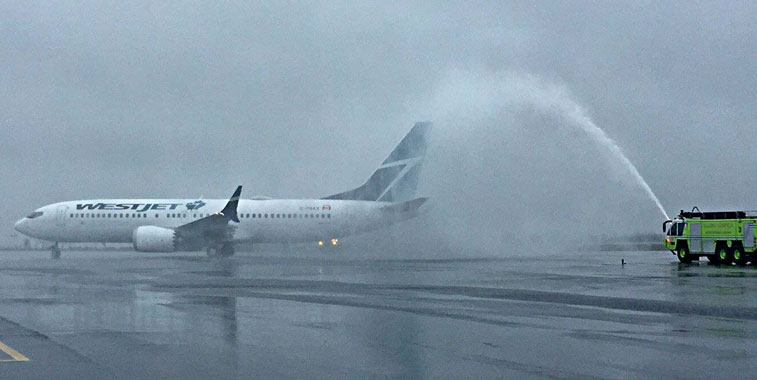 Yuk…hardly the best advert for inbound tourism into Nova Scotia…

Judges’ comments: A lovely, brand new, factory fresh, smart 737 MAX 8 was used on this inaugural flight between Canada and the UK. But event that fact cannot make-up for the horrendous weather earlier this week in Nova Scotia. Let’s hope that the local tourism authority doesn’t use this image in its marketing material trying to entice travellers from the UK to visit their corner of Canada..