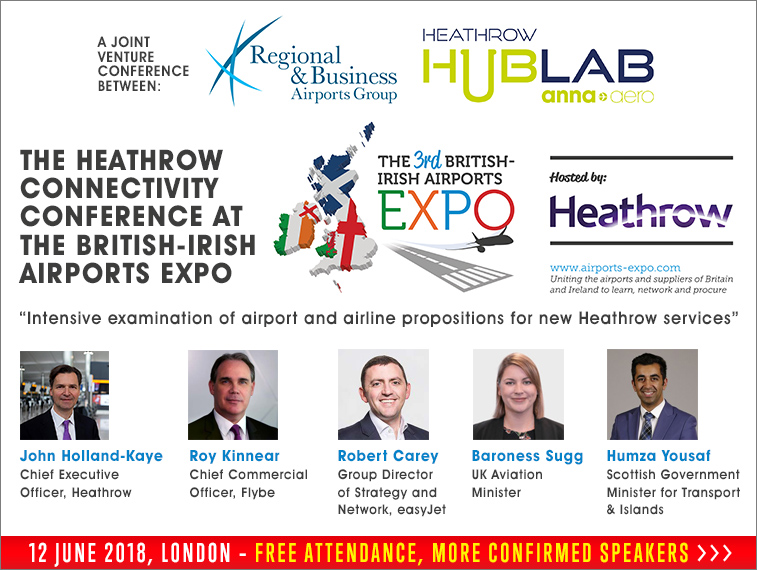 The FREE-OF-CHARGE Heathrow Connectivity Conference takes place at the Heathrow-hosted British-Irish Airports EXPO at London Olympia 12-13 June 2018. The Star Presentation will be made by easyjet’s Group Director of Strategy & Network, Robert Carey, who will explain the plans for a Heathrow easyJet base.

In the second of a series of analyses leading up to the anna.aero-RABA Heathrow HubLAB conference next month, we take a look at trends in domestic links to Europe’s largest hub airport. Heathrow HubLAB is the FREE-OF-CHARGE Heathrow Connectivity Conference taking place at the Heathrow-hosted British-Irish Airports EXPO at London Olympia 12-13 June 2018 (200 exhibitors, 3,000 visitors). This FREE event is an important opportunity for airports to find out more about airline plans to provide new services from an expanded Heathrow. The Star Presentation will be made by easyjet’s Group Director of Strategy & Network, Robert Carey, who will explain the plans for a Heathrow easyJet base.

One of the key arguments in support of Heathrow Expansion, including the third runway, is that it would make capacity available for the introduction of additional domestic connections. The analysis below identifies 14 unserved UK regional airports that have scope for new domestic Heathrow services. (We follow CAA “UK” definitions which include non-UK dependencies like the Channel Islands.)

The largest current domestic routes are Edinburgh and Glasgow, but in general, internal UK services have been in decline at Heathrow. Since 1990, 19 different domestic connections have been offered to Heathrow, but only eight of these remain available in 2018. The graph below shows that from 2000 to 2017, the number of domestic passengers fell from 7.40 million to 4.80 million, equivalent to a 35% reduction in traffic, although last year did see a slight improvement, with a 2.8% increase in travellers on internal UK services. 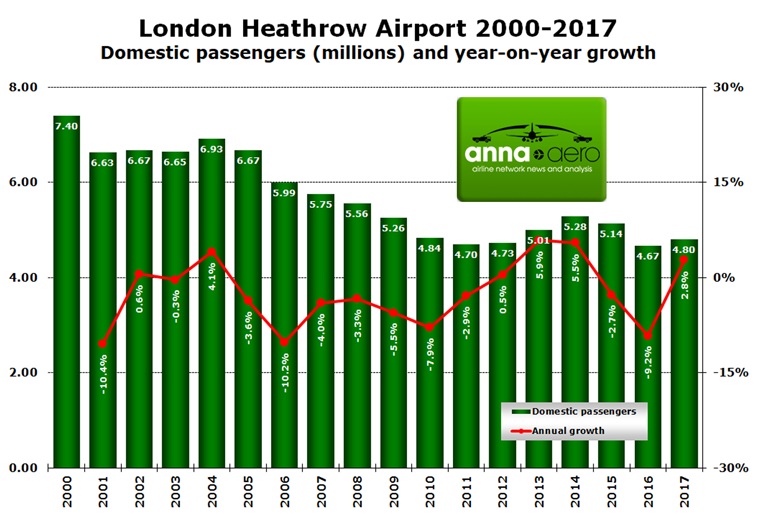 In 2000, international passengers accounted for 88% of Heathrow’s total traffic, but by 2017 this market share had increased to 94% as carriers have replaced domestic services with more lucrative, often wide-body, international links with diverse cabin products, including more first or business class seats etc. This short-term gain causes structural problems for both the hub –  when long-haul airlines like Virgin Atlantic Airways struggle to get enough feed, but especially the UK regional airports who lose both connectivity and their dominant, best-performing route.

Of the eight domestic destinations available from Heathrow during S18, half are from Scotland. The combined capacity available on the four Scottish links accounts for 59% of the departing domestic seats from Heathrow during the week commencing 1 May. The remaining four destinations include one in Northern Ireland and three in England, meaning Wales is the only country in the UK without a direct air service to London’s largest airport. Edinburgh is currently the biggest UK destination from Heathrow, accounting for 24% of the airport’s weekly one-way domestic capacity in S18. OAG schedules show that two carriers – British Airways (BA) and Flybe – will offer a combined 95 flights to Edinburgh from Heathrow during the week commencing 1 May, with daily departures ranging from eight on Saturday, to as many as 16 on Thursdays and Fridays.

All eight domestic routes were also operated in 2017, with three showing an increase in capacity this summer compared to the equivalent week in 2017. The largest growth has come on services to Inverness, with seats increasing by one-third due to BA adding three additional weekly flights. The links to Glasgow and Newcastle have also seen moderate growth. However, the other five routes have seen a decline in weekly capacity compared to 2017, with the largest cuts coming on the Leeds Bradford sector, with BA scaling back its weekly frequencies from 19 to 10, possibly because of traditional Heathrow slot pressure. 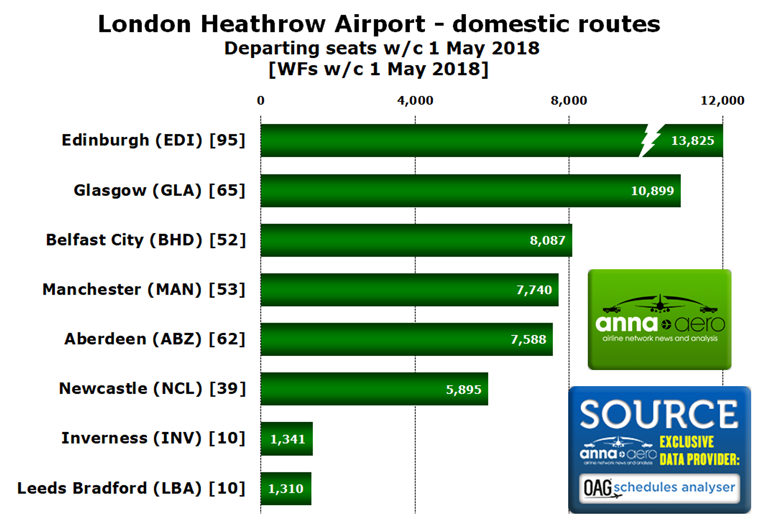 Heathrow’s eight domestic connections place it far behind some other large European hubs which will offer more links to UK regional airports this summer. OAG schedules show that Amsterdam will be connected to 20 UK regional facilities (excluding all six London airports), while Paris CDG will be linked to 14. In both cases some of these regional UK links would not be viable for Heathrow services due to their relative proximity to the London airport, with Southampton being a case in point. Heathrow will still offer more non-London UK connections than some other major European hubs including Frankfurt (five) and Istanbul Atatürk (three).

Only three airlines will offer domestic capacity from Heathrow during the week commencing 1 May. Unsurprisingly, home-hub operator BA dominates the departures board, accounting for 87% of the available domestic seats. The other operators are IAG-owned Aer Lingus and Flybe. Aer Lingus’ only UK domestic service is a three times daily connection to Belfast City, while Flybe began services to Aberdeen and Edinburgh last March, following the withdrawal of Virgin Atlantic Airways’ ill-fated Little Red operation. Three of the eight domestic connections are operated by multiple carriers, with BA and Flybe both serving the Aberdeen and Edinburgh links, and Aer Lingus and BA both flying to Belfast City.

The below table lists the 11 domestic routes that have been discontinued from Heathrow since 1990. Heathrow Expansion could make enough slots available to justify the return of some of these services; although it is safe to say that at least three of these connections are unlikely to make a comeback. Plymouth Airport closed in 2011 and is proving hard to reopen, while potential air links to Birmingham and East Midlands face competition from the new HS2 high-speed rail line which will offer its own connectivity to Heathrow. That leaves a further eight previously-served airports that could be in contention for a return of flights to Heathrow when slots become available (before and after Heathrow Expansion): Belfast International, Durham Tees Valley, Guernsey, Humberside, Isle of Man, Jersey, Liverpool and Newquay.

The table also shows which of the domestic destinations cut from Heathrow’s network are currently connected to other London airports, or to one of the major European hubs. In this case we considered Amsterdam, CDG, Frankfurt and Atatürk are in this grouping since they are frequently identified as among Heathrow’s main competitors for European connecting traffic. Some arguments against Heathrow Expansion suggest that domestic airports with an alternative London connection, plus a link to one of these European hubs, would not require the addition of a Heathrow service, since the dual benefits of point-to-point access to London and the opportunities for onward connections would both already be covered. However, of the eight airports identified above as potential candidates for new domestic Heathrow services, only Belfast International currently enjoys both alternative London links, plus services to one of the four major European hubs.

Links to an alternative London airport alone are not enough to squash the arguments for connectivity since Heathrow offers far more transfer opportunities than the other London airports. OAG Traffic data estimates that up to 420,000 passengers, or 36% of the total (CAA figures) travelling between Heathrow and Edinburgh in 2017, connected over Heathrow to or from onward destinations rather than simply using this as a point-to-point airport pair. It is also noteworthy that four of the previously served destinations (Guernsey, Isle of Man, Jersey, Newquay) have no regular connections to one of the major European hubs.

The eight discontinued routes that we have identified for a possible return to London’s largest airport are all featured in a graphic produced by Heathrow to indicate potential new domestic connections when the third runway opens. The graphic is based on theoretical route maps drawn up by easyJet and Flybe and also puts forward destinations that have not been served from Heathrow before, or that have not been operated from 1990 onward. These include Dundee, Glasgow Prestwick, Carlisle, Londonderry, Doncaster Sheffield and Norwich as possible destinations. This brings the potential total for new domestic routes up to 14.