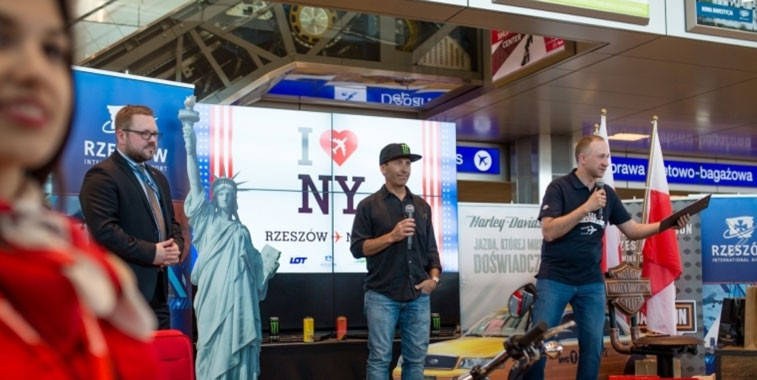 LOT Polish Airlines commenced operations from New York Newark to Rzeszow on 29 April, with the aircraft operating on a w-pattern from Warsaw Chopin. The route will be flown weekly, with flights leaving the Big Apple on Sunday evenings, with the return service from Rzeszow departing on Tuesdays. The airline will fly the route using 787-8s. 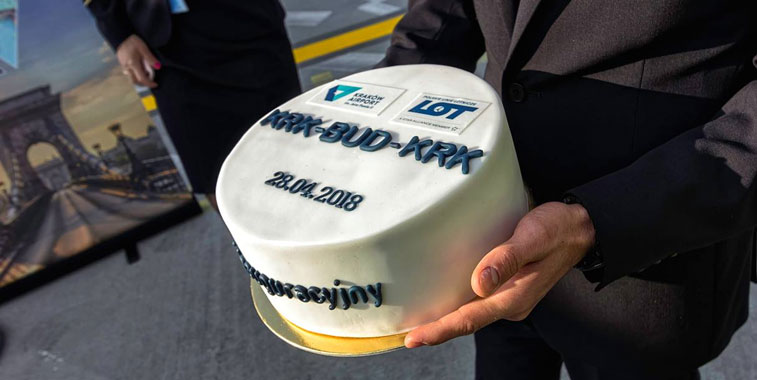 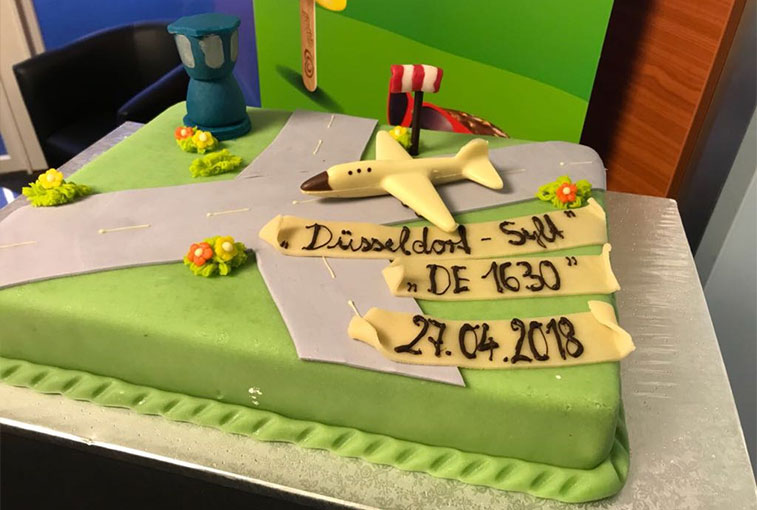 On 27 April, Condor began a twice-weekly service from Dusseldorf to Sylt. The 415-kilometre airport pair became the German leisure airline’s first ever domestic sector. It will face competition from Eurowings. 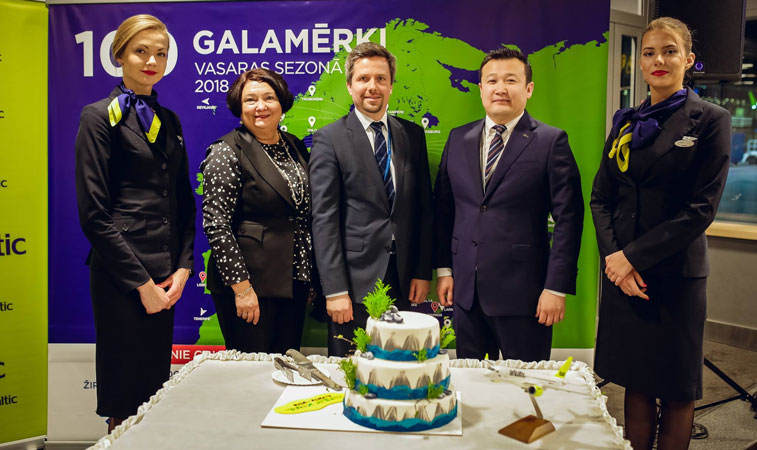 airBaltic inaugurated its latest route form Riga on 29 April, a 3,949-kilometre connection to Almaty in Kazakhstan. To celebrate, a traditional three-tier route launch cake was baked. Flights on the sector will operate three times weekly on the carrier’s fleet of CS300s. No other airline currently flies between Latvia and Kazakhstan. 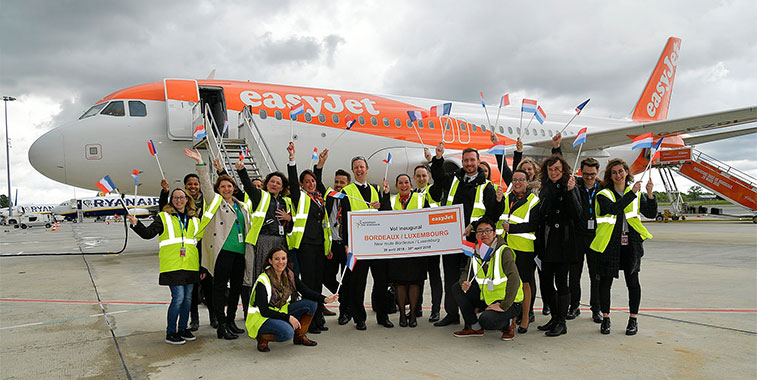 Having opened its new base at Bordeaux earlier in S18, the LCC commenced four more new routes from the French gateway this week. The airport’s commercial team are seen here celebrating with easyJet crew which performed the inaugural flight to Luxembourg, a service which began on 26 April. 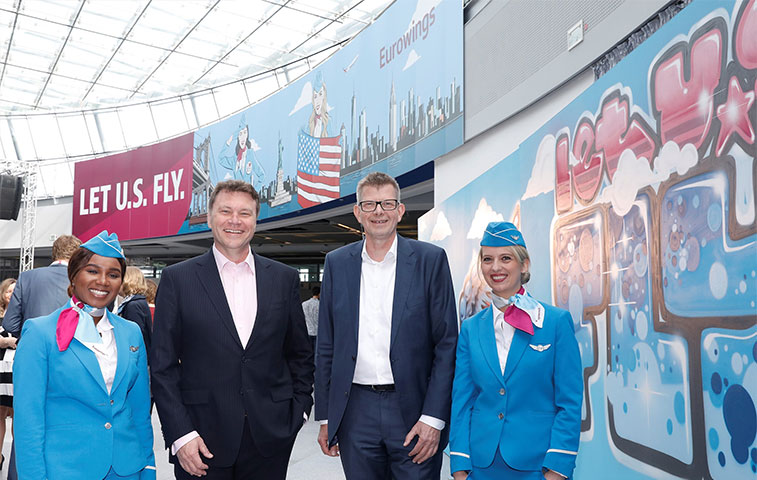 Marking the start of Eurowings’ new route from Düsseldorf to New York JFK were Thomas Schnalke, Speaker of the Management Board of Düsseldorf Airport (left) and Thorsten Dirks, Lufthansa Board Member and Eurowings CEO (right). In addition to the LCC’s rapidly growing supply of short- and medium-haul routes, the market leader at Düsseldorf Airport will offer 1,700 long-haul flights per year and carry around 450,000 additional passengers from Düsseldorf. 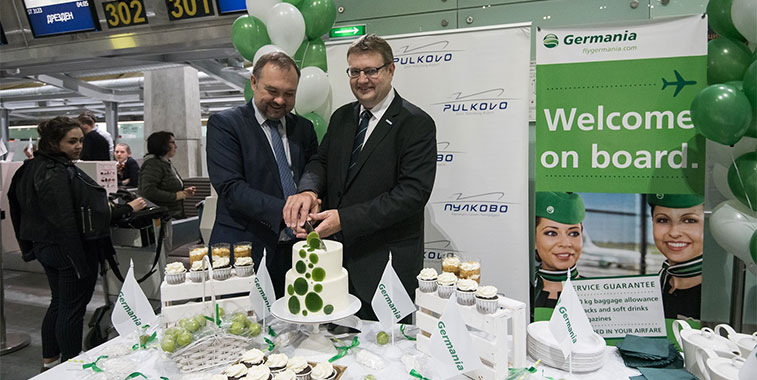 St. Petersburg welcomed the first Germania aircraft with a traditional water canon salute on the ramp and travellers departing on the first flight were greeted at the check-in with candy and souvenirs. The very first passenger received a special set of gifts from the airport operator Northern Capital Gateway (NCG) and the airline. Cutting the cake were NCG CCO Evgeniy Ilyin and Claus Altenburg, Director Sales, Germania. 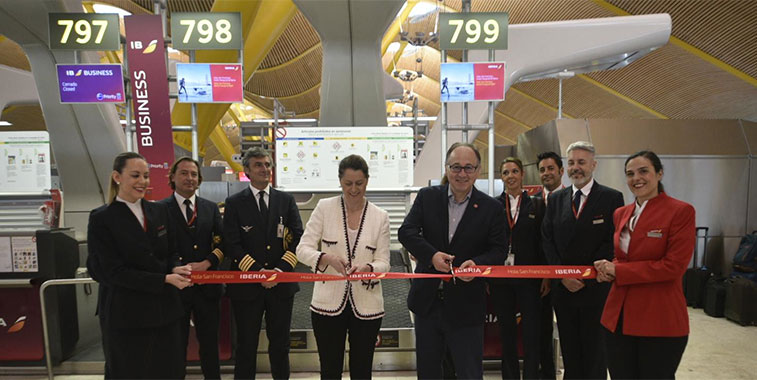 Iberia launched its latest transatlantic service on 25 April – San Francisco. The oneworld airline flies to six destinations in the US, but interestingly offers none to Canada. 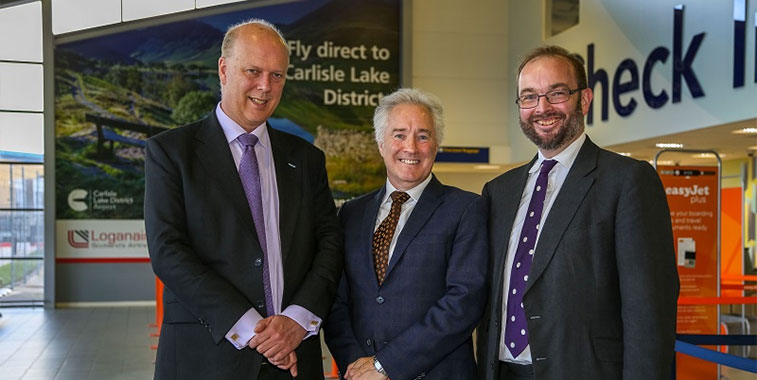 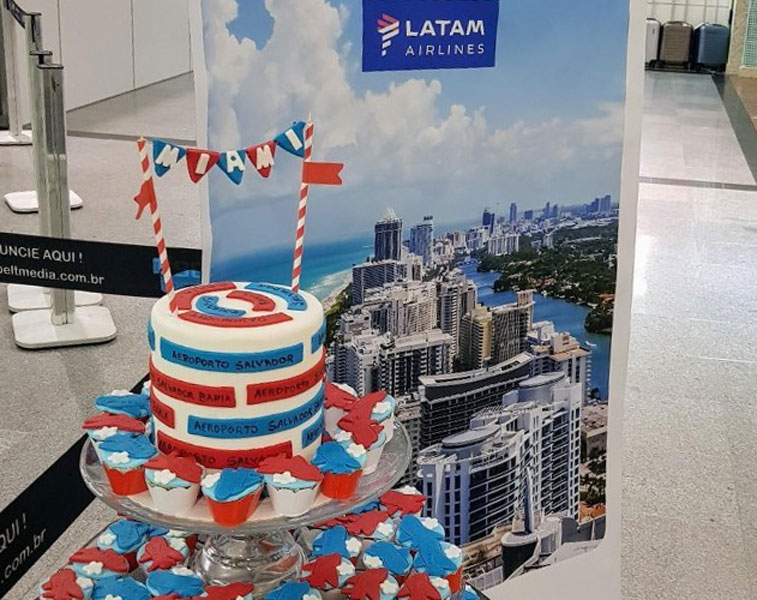 Salvador de Bahia Airport baked a cake to toast the arrival of LATAM Airlines’ first flight from Miami, a service which started from the US airport on 29 April. The carrier will operate the 6,251-kilometre route weekly using its 767-300s. 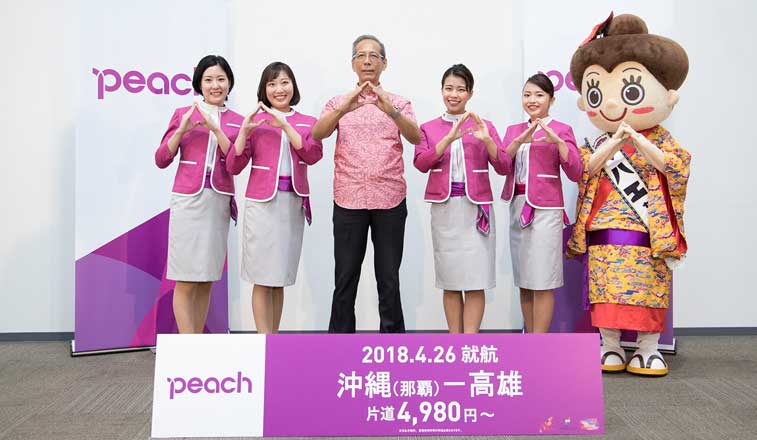 Junichi Nakamura, Okinawa Station Manager, Peach Aviation, was joined by an Okinawa tourism mascot to celebrate the Japanese LCC’s first flight to Kaohsiung in Taiwan on 26 April. The airline will serve the 838-kilometre airport pair daily with A320s and faces incumbent competition in the form of Tigerair Taiwan and China Airlines. 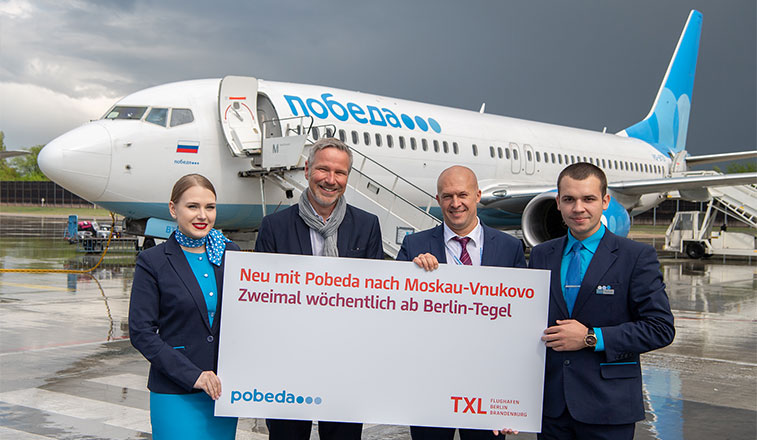 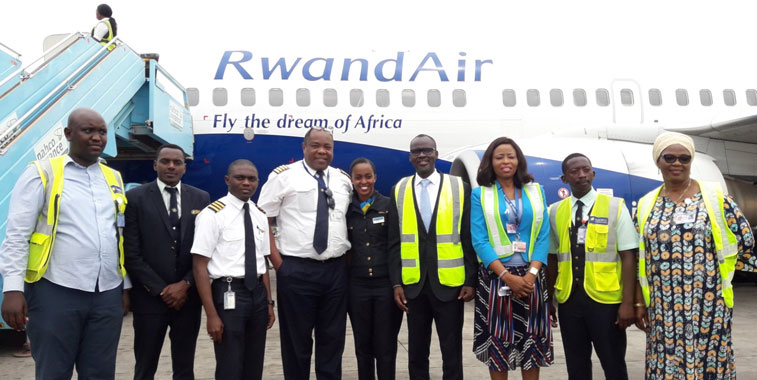 RwandAir commenced flights between Kigali and Abuja on 27 April, a route that the carrier will operate four times weekly using its fleet of 737-800s. The carrier already serves Lagos in Nigeria with a daily service. 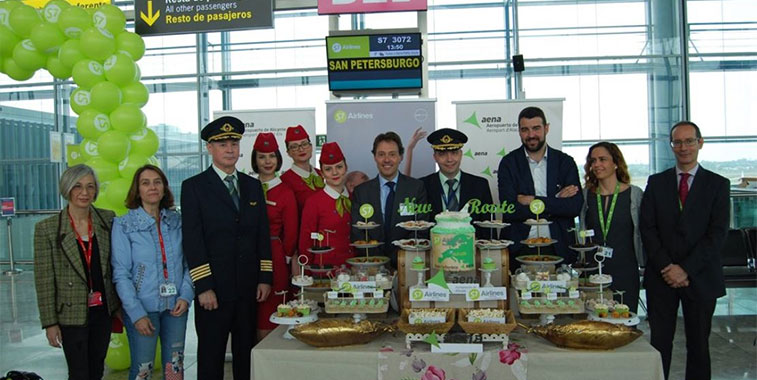 The second of two new Spanish routes that S7 Airlines introduced this week was a weekly operation from St. Petersburg to Alicante. Laura Navarro, Alicante Airport Head of the Cabinet (second right) and Juan Carlos Arcones, S7 Airlines Country Manager Spain (fifth right) were on hand to mark the start of the one-world carrier’s 3,224-kilometre sector. 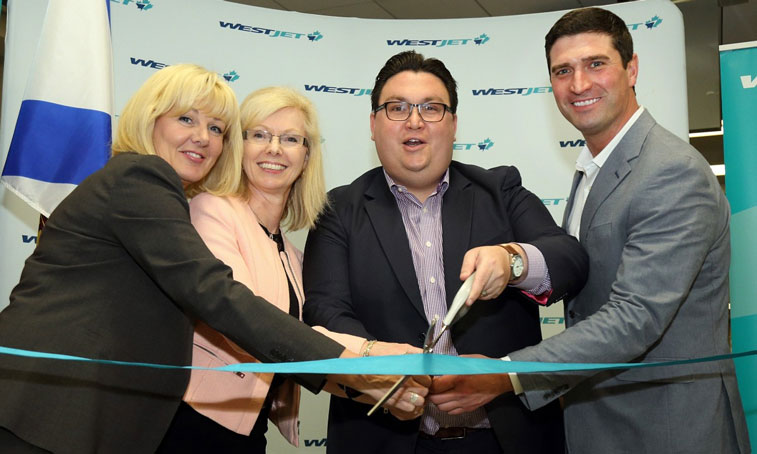 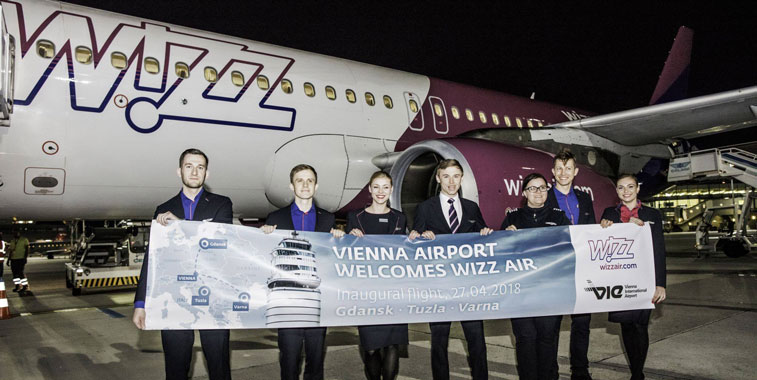 Wizz Air introduced not only Vienna, but Austria, to its network on 27 April, the day which saw it begin flights from Gdansk and Tuzla, while Varna services were launched the following day. From June the Austrian capital city airport will become a base for the ULCC, with it expecting to have at least five stationed aircraft at the facility by the end of 2018. 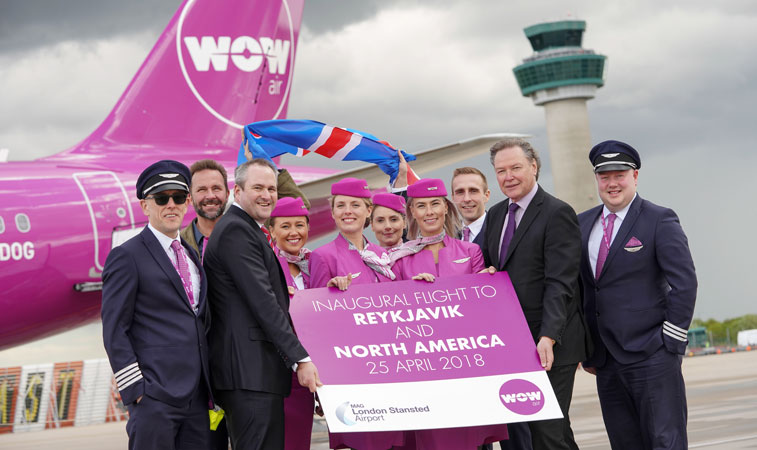 WOW air introduced flights to Detroit on 25 April, with celebrations at the US airports including cake and balloons. The 4,480-kilometre sector from Reykjavik/Keflavik will be flown four times weekly on the carrier’s fleet of A321s, of which it currently has 13 in its fleet. The city pair is presently not flown by another airline.