Ryanair to grow by 4% at its Dublin home this year; Stansted link #1; Germany growing fast 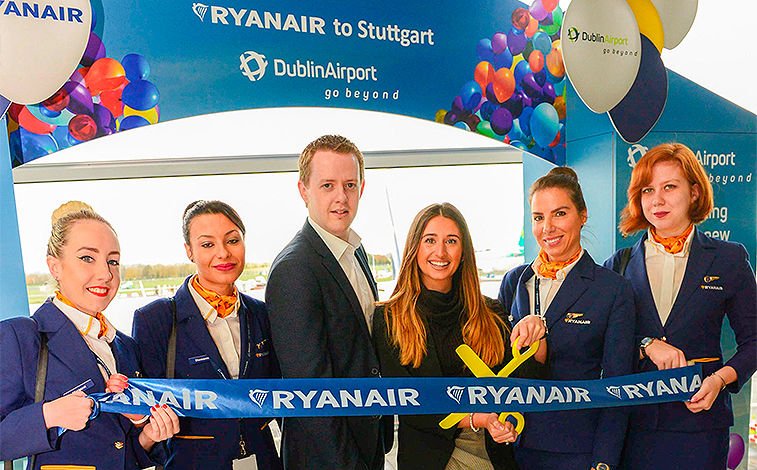 Last November, Ryanair introduced a new daily service to Stuttgart from its spiritual home base of Dublin. Over the last 12 months, weekly capacity to Germany has increased by 73% for the ULCC from its second-largest operation, making it the fastest growing country market for the airline in its top 10.

While Ryanair’s largest base has been at London Stansted for years, and despite the airline being a true pan-European success, the ULCC’s spiritual home will always be in Dublin, the place from which this industry titan grew. This summer (w/c 4 May), the airline will offer 88 destinations from its second-biggest operation, up from 83 in S17. The five new destinations added over the past 12 months being fresh links to Marrakech, Munich, Naples, Paphos and Stuttgart. Comparing this week’s schedules at Dublin with the same seven days in 2017, Ryanair has increased its capacity count by 4.8% to close to 150,000 weekly seats.

Falling in and out and back in love with Dublin

Over the last 10 years Ryanair has had a love, hate, and now love again relationship with its Dublin operation. Some of the upsets have been out of the airline’s control – the economic downturn and the €3 Irish ADP tax which was scrapped in April 2014 – but since a bottoming out in 2012, when the carrier’s annual one-way seats dipped to 4.6 million, the general trajectory has been upwards (with a slight blip in 2017). 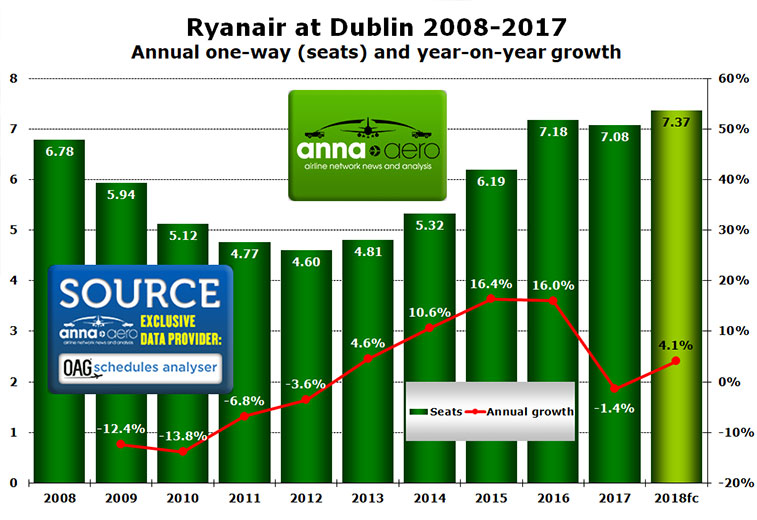 The forecast for 2018 (highlighted in light green) indicates that last year’s capacity blip has been more than recovered, although of course seats can still be removed, or indeed added, over the remaining seven months of the year. It should also be noted that the carrier only passed its 2008 peak at Dublin again in 2016. Ryanair’s importance to Dublin in terms of its share of the airport’s total capacity has remained around 40% during the period analysed, but its overall stake is perhaps on the wane. Although it peaked in 2009 when the ULCC commanded 45% of the Irish capital city airport’s annual seats, and dropped as low as 38% in 2013, this year’s share is back below the 40% marker again at 39%. 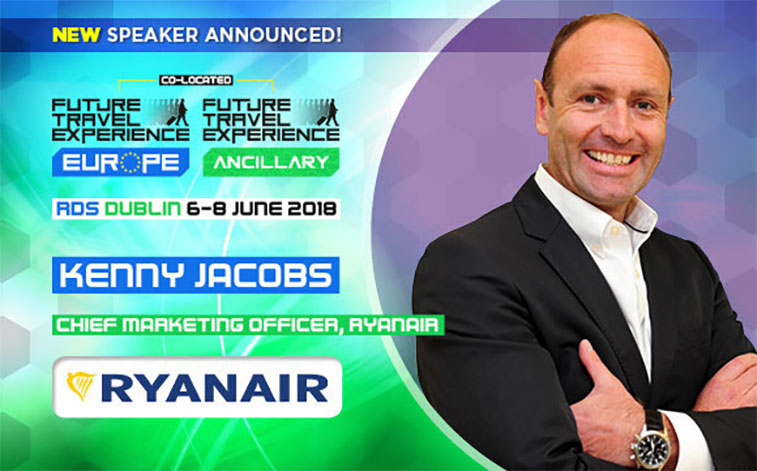 Stansted #1 airport pair and only top route to grow

Ryanair’s top 13 routes at Dublin have gone unchanged since last May, and this is for good reason, and perhaps unique in this type of airline/hub analysis we do at anna.aero. While the ULCC’s capacity on its #1 route to Stansted – effectively linking the airline’s two biggest hubs – has increased by 6% year-on-year, the remaining 12 sectors have all gone unchanged, with not one route growing or declining in their respective weekly seats. It is not until you reach the joint (shared with Brussels) 14th biggest route from the Irish airport that you encounter another route either increasing or falling in terms of its capacity – namely Milan Bergamo, which had added 14% more seats this May. Rome Ciampino, Ryanair’s joint 17th largest route (shared with Leeds Bradford and Munich), is the first airport pair which observes a capacity drop, with a 7% cut in seats since the same week last year. 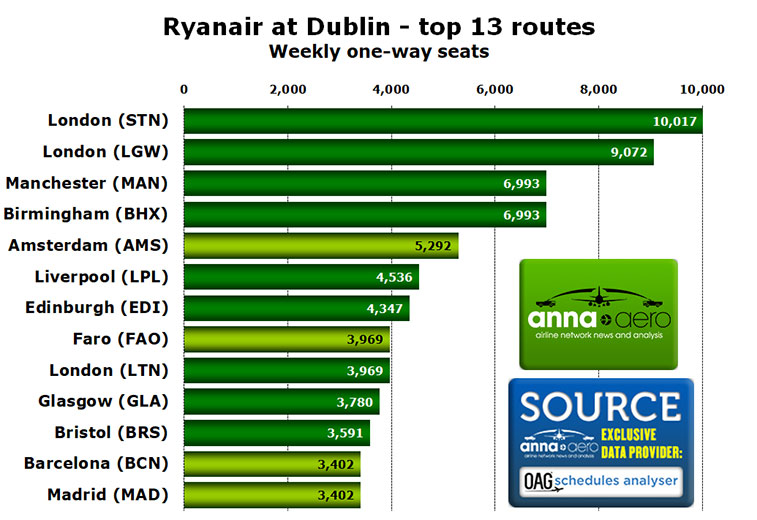 The importance of the UK market from Dublin is clearly illustrated in the graph above, with just four of the top 13 destinations served (highlighted in light green) from Dublin being in Europe, and the remaining nine being airports in the UK. Ryanair’s top 13 routes at Dublin in S18 combine to control 47% of the airline’s capacity at the airport, down from 49% in the same week last year.

Ryanair presently flies to 24 different country markets from its second-most-important base, with Cyprus and Morocco being additions over the past 12 months. Unsurprisingly connections to near-neighbour the UK are the most vital for Ryanair from its Dublin gateway (commanding a 41% share of its total seats), with seats between the two countries growing by a marginal 0.9% since last May. The airline flies to 12 airports in the UK, with weekly frequencies peaking on the Dublin-Stansted sector (53), but even the lowest number of weekly flights (13), which are flown to Newcastle and East Midlands, are just below twice-daily. 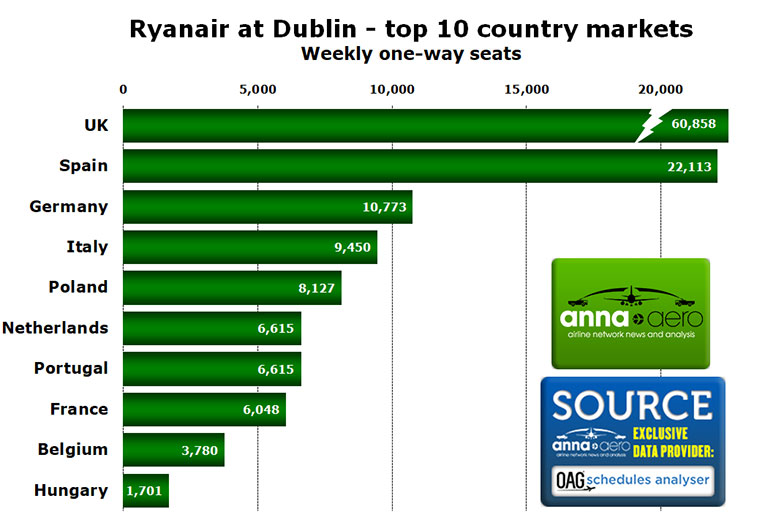 Looking ahead to any route launches from the airline at Dublin for the rest of 2018, and consulting anna.aero’s New Route Database, Turkey will become the ULCC’s 25th country market in June when it commences a weekly (Sundays) service to Dalaman. If Ryanair has any further plans to enhance its operation at its main Irish gateway, anna.aero will bring you the route news first. 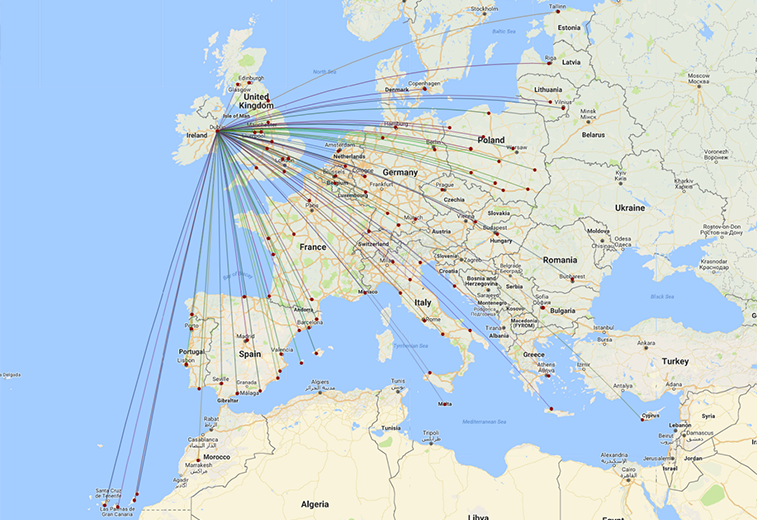 Ryanair currently offers 88 destinations from its Dublin gateway. Dalaman will become the ULCC’s 89th destination on 24 June, when it begins a weekly service. At the same time Turkey will become the airline’s 25th country market served from the Irish capital city airport.