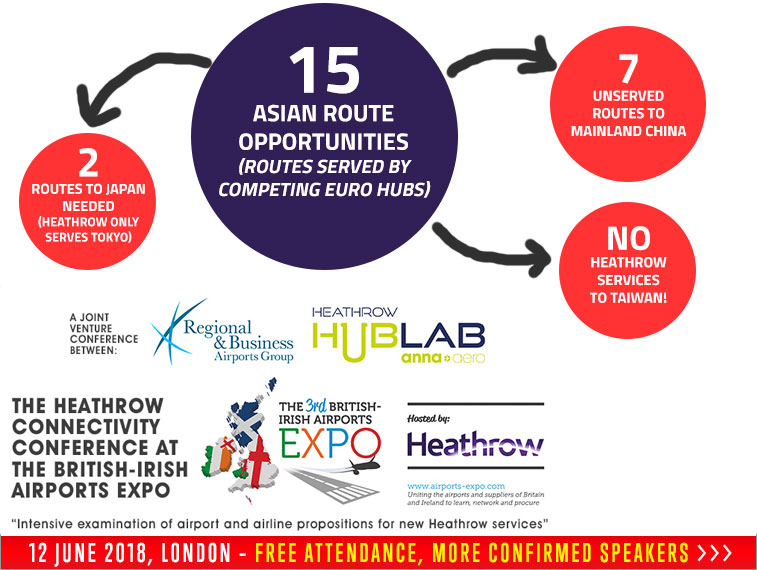 In the latest of a series of analyses leading up to the anna.aero-RABA Heathrow HubLAB conference next month, we take a look which routes are missing from Europe’s largest hub airport to Asia. Heathrow HubLAB is the FREE-OF-CHARGE Heathrow Connectivity Conference taking place at the Heathrow-hosted British-Irish Airports EXPO at London Olympia 12-13 June 2018 (200 exhibitors, 3,000 visitors). This FREE event is an important opportunity for airports to find out more about airline plans to provide new services from an expanded Heathrow. The Star Presentation will be made by easyjet’s Group Director of Strategy & Network, Robert Carey, who will explain the plans for a Heathrow easyJet base.

A key benefit of Heathrow Expansion, including a third runway, is to make extra capacity for new links to underserved markets. Heathrow itself says: “We estimate that a third runway would enable Heathrow to regularly serve 130 long-haul destinations – 40 more than today.”

This analysis identifies 15 airports in Asia as a starting point for potential new destinations from Heathrow, including seven in China (we use OAG’s classification of Asia, covering Central, Northeast, Southeast and South Asia). These airports have no current Heathrow connections, and additionally, they are in country markets where Heathrow is not the leading European origin point.

India is the strongest Asian country market from Heathrow, based on one-way seats in S18. There are regular scheduled services to six Indian airports this summer, with Mumbai and Delhi leading the way with the most capacity. In total, India will account for 23% of all departing seats on services from Heathrow to Asia. During the week commencing 8 May there will be 110 flights operating from Heathrow to India, with 15-17 departures per day. Indeed, most of Heathrow’s top 12 Asian country markets will experience an increase in capacity this year compared to S17, with some of the largest growth coming on links to the Philippines (37%), and Singapore (27%). Three of the top-ranked markets (highlighted in red) will witness a contraction in seat numbers, with the largest cuts coming on services to Malaysia (29%). 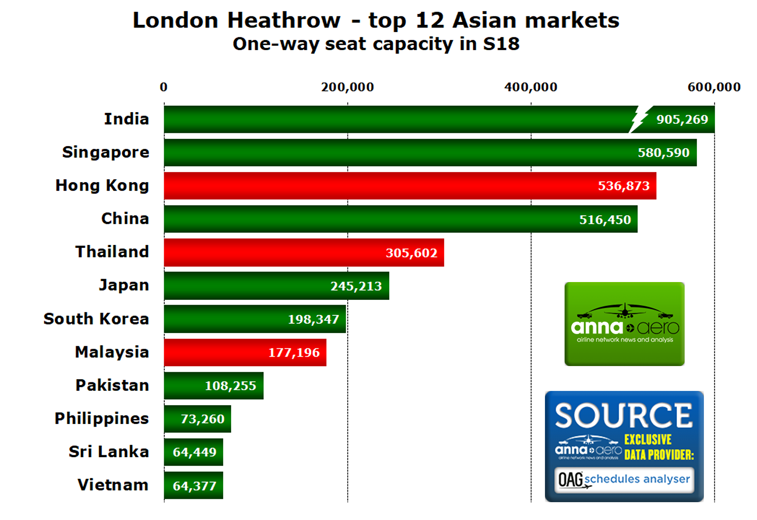 Available one-way capacity on flights from Heathrow to Asia only increased by 2.1% between S08 and S18, contrasting to a growth of 17% for all international links. The slower expansion of Asian capacity suggests that airlines are choosing to fall back on more established markets for their growth, rather than introducing new routes which might need time to develop. In some instances, these choices are probably being made due to the current squeeze on capacity at Heathrow.

To put Heathrow’s Asian connections into perspective, we have considered them alongside those of Europe’s other mega hubs, namely Frankfurt, Amsterdam, Paris CDG and Istanbul Atatürk (which along with Heathrow we refer to as the FLAPI airports). The table below shows Asian connections from the FLAPI hubs in terms of total destinations and countries served, one-way capacity to Asia during S18, and the growth in this capacity compared to S08. Although Heathrow will offer the most capacity to Asia this summer, more than half of these seats will be on services to India, Singapore and Hong Kong alone. Meanwhile, one-way capacity growth to Asia from Atatürk, CDG and Amsterdam has significantly outpaced Heathrow’s, with all three airports closing the gap. Atatürk and Frankfurt both offer more destinations overall, while the Turkish hub is also connected to more Asian countries than Heathrow. Again, the lack of capacity at Heathrow is likely to be the key factor to its slower percentage growth in Asian capacity.

In total, Heathrow will offer links to 17 Asian countries this summer. Across all five FLAPI airports, 25 Asian markets will be connected to Europe. The only country market served exclusively by Heathrow is Sri Lanka. Of the eight markets unserved from Heathrow, several are linked to more than one of the other FLAPI airports. Heathrow is the only FLAPI hub without a direct service to Taiwan. Taipei Taoyuan is instead served from Gatwick.

Heathrow might be expected to offer the most capacity to those Asian countries it does serve. Schedule data reveals this is not the case. Out of the 17 Asian countries served from Heathrow it is the largest, or sole capacity provider, in just six: India, Singapore, Hong Kong, Thailand, Malaysia and Sri Lanka.

Heathrow is the largest origin point for five of the top 12 Asia country markets (based on one-way capacity from the FLAPI airports) in S18. The seven markets for which the London hub is not the leading departure airport are listed in the table below. The table also lists the leading FLAPI hubs for each of these markets, and how much of a capacity advantage they offer over Heathrow. The airports in each market with at least one FLAPI link, but no current connection to Heathrow, are illustrated as well. These countries, and the 15 identified airports, are a good starting point for potential new Asian links, since they already support connections to the competing FLAPI hubs. As Europe’s largest hub, presumably Heathrow could expect to be at the front of the queue for such services should suitable capacity become available.

Significantly, China is the largest Asian market for which Heathrow is not the main European origin airport. CDG will offer 58% more seats than Heathrow to China this summer. There are also seven Chinese airports with FLAPI links, but no Heathrow connections: Chengdu, Hangzhou, Kunming, Nanjing, Shenzhen, Shenyang and Xiamen. CDG is also the largest FLAPI airport for Japanese capacity, offering 45% more seats than Heathrow (which is only connected to Tokyo and has no links to Osaka Kansai or Nagoya, despite these airports being served from other FLAPI hubs). Kazakhstan is another market of note, to which Heathrow only offers one connection, and far less capacity than Atatürk and Frankfurt.