London Southend welcomes the launch of daily flights by Air Malta; anna.aero joins the airport and airline to celebrate the start of services 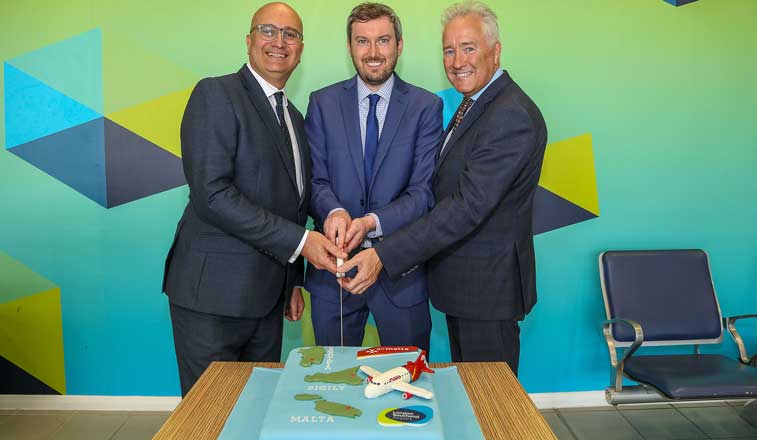 Air Malta has launched three new direct services to London Southend Airport in the past week. The airline began by introducing a three times weekly connection on the 2,100-kilometre sector from Malta on 4 May, with this route operating on Tuesdays, Fridays and Saturdays. It then launched a link on the 1,513-kilometre Cagliari sector on 6 May, followed by the introduction of the 1,928-kilometre Catania route on 7 May. The Cagliari and Catania routes will both be served twice-weekly with the former operated on Wednesdays and Sundays, and the latter on Mondays and Thursdays. This means that Air Malta will offer one flight per day from Southend, year-round. There is no competition on the Cagliari and Catania airport pairs, which are the only services Air Malta operates from a UK airport that do not feature a direct connection to Malta. On both the Sardinia and Sicily links, there is an option to travel onward to Malta after a short stop. The direct Malta flights are the only new link with incumbent competition, with easyJet already providing two flights per week. All three routes will be flown on Air Malta A320s.

“This winter we will extend the terminal by about one-third and that will give us terminal capacity for about 6.0-6.5 million passengers per year,” Glyn Jones, CEO of Stobart Aviation, owners of London Southend Airport, informed anna.aero Chief Analyst Nick Preston. “We have told our shareholders that we will be handling 5.0 million passengers by 2023 and the work that we’re doing with Air Malta is a great step in the right direction. Making these three routes work is absolutely crucial,” continued Jones. “Air Malta is a flag carrier with a two-class product, so we’re serving business class passengers and expanding our offering. If we can make this work and I am absolutely confident that we can, it will set a good example for other carriers to look at.”

Joseph Galea,  Acting CEO Air Malta said “Air Malta is very excited. London has always been a major destination for Maltese people, and Malta is a popular attraction for British people, so the connectivity we are now offering between Malta and London – plus Cagliari and Catania – makes it very exciting for us. Mostly we fly point to point, but the London Southend product gives us the opportunity to combine Sardinia and Sicily – it is already doing well, so we are thrilled as it is where we want to go in the future.” 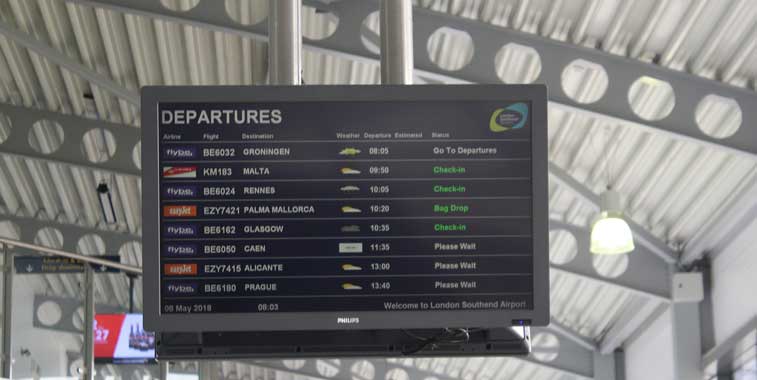 When anna.aero arrived in sunny Southend on a bright clear May morning, passengers were already being invited to check-in for flight KM183 to Malta, which had a scheduled departure time of 09:50. Air Malta will now be a daily feature on London Southend’s departure board, joining the airport’s two main carriers easyJet and Flybe. It becomes the fourth operator to serve Southend, following the two-based airlines and French regional carrier IGAvion. Flight KM182 from Malta arrived seven minutes ahead of schedule at 08:58 and made the short taxi onto one of London Southend’s 21 aircraft stands, each capable of handling A320-size aircraft. Among the 137 passengers to disembark was Air Malta’s Acting CEO, Joseph Galea. 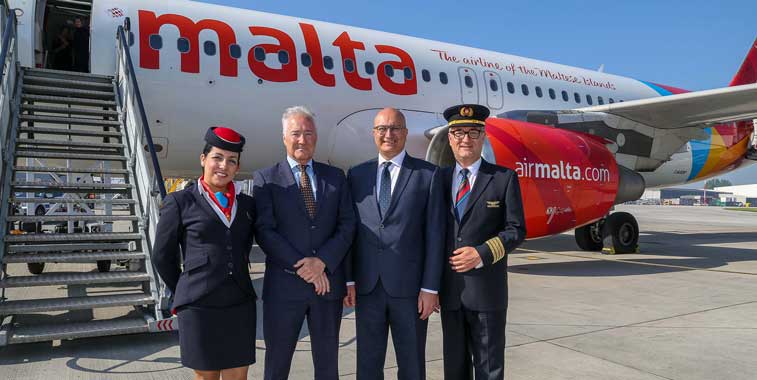 After the passengers had made their way to the arrivals hall, there was time for Glyn Jones (second left), to formally welcome Joseph Galea (second right) and the inbound flight crew to London’s newest airport. This was the third flight from Malta to London Southend since services began on 4 May. As is tradition on these occasions, an impressive cake was baked to mark Air Malta’s triple-route launch. The Mediterranean map theme made sure the destinations of Malta, Sardinia and Sicily were all represented and anna.aero Chief Analyst Nick Preston lent Glyn Jones and Joseph Galea a hand to perform the ceremonial cutting. After a short walk to security, passengers arriving from Malta made their way to London Southend’s baggage claim area where they were greeted with information boards showing the latest train departure times. The airport’s dedicated rail station is a mere 30-second covered walk from the terminal with regular trains in each direction to London and Southend. “Its 45 minutes to Stratford on the train,” Jones told Preston. “Stratford is better connected by rail and road than Liverpool Street, we have six trains an hour at peak and the fares are not expensive.”