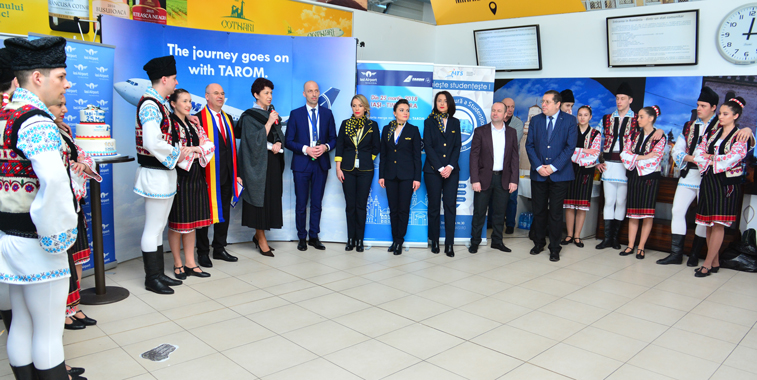 TAROM commenced its second and third domestic routes from Timisoara in March, with the Romanian flag carrier linking the former city to Iasi and Cluj-Napoca. Expansion in the home market has seen domestic capacity jump from being the fourth largest just over three years ago, to becoming the #1 market in S18.

The Romanian market is one of the most dynamic and fast-moving in Europe. The predominantly LCC-fuelled rapid rise of traffic at the nation’s four largest airports – Bucharest, Cluj-Napoca, Timisoara and Iasi – all of which now handle over one million passengers per annum, clearly illustrates the evidence of this burgeoning growth. In 2008, the four airports mustered less than seven million annual passengers between them. Last year their combined traffic total was over 18 million – a 167% increase since 2008 – with all three regional airports breaking the one million passenger barrier for the first time in those ten years, most recently by Iasi, which processed the landmark volume in 2017. The country’s four biggest airports will need to average around 10% growth in order to smash the 20 million milestone in 2018 – a goal that seems eminently achievable. 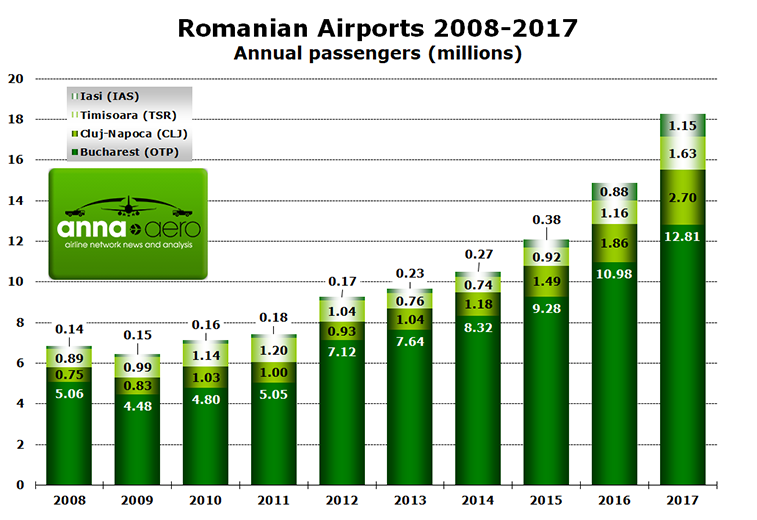 The remainder of Romania’s other significant commercial airports – Bacau, Craiova, Sibiu, Suceava and Targu Mures – handled less than two million passengers between them last year, and all have some way to go before they reach their respective one million passenger thresholds. However most are growing fast – Suceava posted a robust throughput increase in 2017 of more than 350% – so these airports should improve their respective stakes in the country’s traffic development this year and beyond.

Wizz Air is the largest carrier in Romania in terms of weekly capacity, but only the second largest when weekly frequencies are considered, leaving the #1 spot on that metric to TAROM. Since we last looked at this market in March 2015, the ULCC has increased its weekly capacity by 75%, while the national carrier has grown by 47%. Over the same time frame Wizz Air has added 168 weekly frequencies to, from and within Romania, while TAROM has increased its tally by just 64. 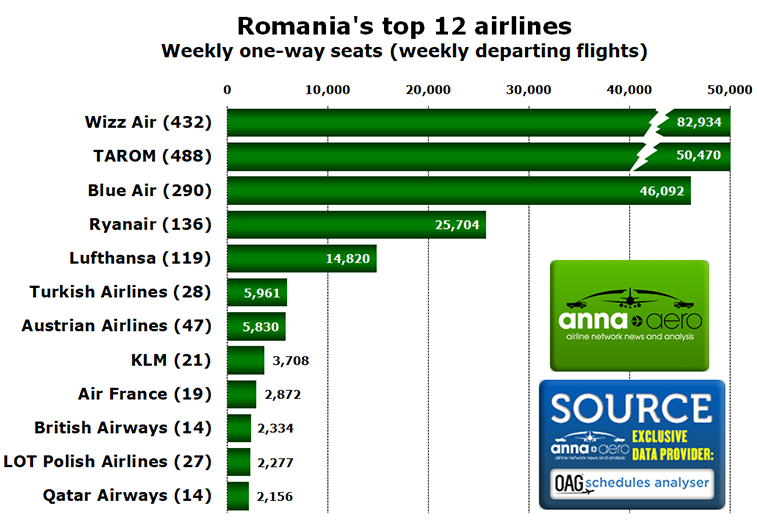 The top 12 airlines command 94% of Romania’s weekly capacity, with Wizz Air controlling 32% of the near-260,000 seats. According to this week’s OAG schedules, the nation is served by 34 airlines, which offer a total of 1,736 weekly frequencies. The top seven carriers are exactly the same as three years ago, however Ryanair has leaped ahead of Lufthansa into fourth place after the ULCC grew by a whopping 444% in that time. Falling out of the top 12 is Alitalia (formerly eighth), to be replaced by Qatar Airways.

The most dramatic change since we last looked at the Romanian market (highlighted in light green) is the surge of growth observed domestically. In March 2015, the home market ranked fourth in terms of weekly capacity, yet three years on it has jumped into top spot. This comes despite the Italian market itself growing by 10,000 weekly seats (although some of this increase may be as a result of seasonal variances in schedules). This week, OAG data shows that there are over 360 weekly domestic flights, from nine airports. Three years ago just 214 weekly frequencies operated across seven airports. 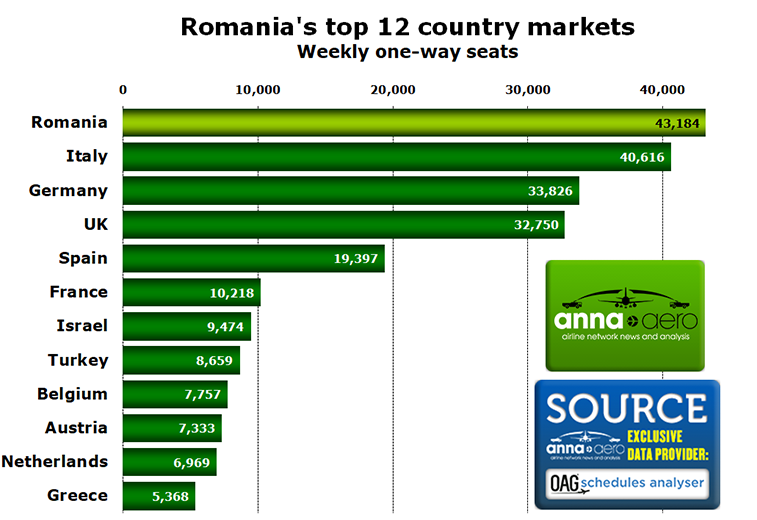 Aside from the domestic market, the other big mover is Israel. Capacity to and from the Middle East country has more than doubled in the period being analysed, seeing it jump from the 11th most-vital market up to sixth. Greece is a newcomer to the top 12 country markets, with Switzerland having dropped out of the rankings. The top 12 countries represent 87% of Romania’s one-way seats in the week commencing 14 May.

31 routes to launch over the rest of S18

Looking ahead to the rest of the summer season, Romania’s airports have a significant amount of network growth in the pipeline. Iasi leads the way with 10 services still to start in S18, followed by Bucharest (nine), Sibiu (six), Cluj-Napoca (five) and Constanta (one). While Wizz Air is leading the new route charge, carriers like Air Canada Rouge, Air Malta and Ellinair are also planning to add flights this summer. Contrary to the recent capacity explosion in the domestic market, only one of these planned city pairs is in this sector, TAROM’s three times weekly service from Cluj-Napoca to Iasi, which launches on 11 June. 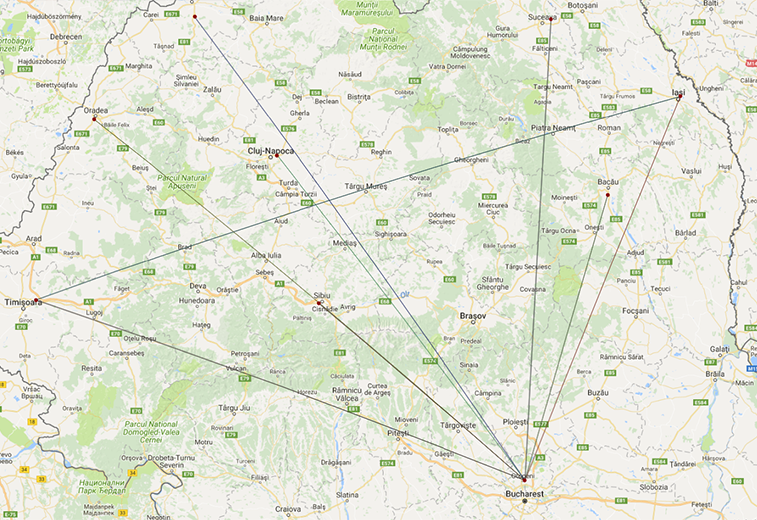 The Romanian domestic market has added nearly 30,000 weekly seats since since March 2015. Only one route does not touch the capital city Bucharest, TAROM’s Iasi to Timisoara city pair. Along with the national carrier, Blue Air, Ryanair and Wizz Air also participate in the home market.