Europe’s airports have long been the dominant force in the Arch of Triumph world and 2018 is proving to be another great year for the region. Since 1 January, Europe had sent in the lion’s share of FTWAs, contributing 92 of the 173 received (53%). With the top spot seemingly already secure for Europe (barring a continent-wide water shortage this summer) the race to be the second-most prolific region is where the action is at. Currently this position is being held by North America (15%), with South America not too far behind (12%) and Asia (9%) ranking in fourth. The remaining four global zones – Africa, Australasia, Middle East and Caribbean – share the remaining 10% (combined 19 entries) between them. Keep Monitoring!!

Aegean Airlines Athens to Zagreb 14 May 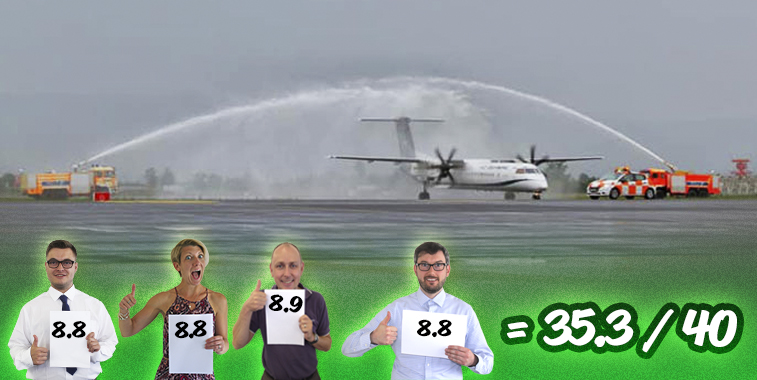 Is that a giant car…or is it just that little bit closer to the photographer…?

Judges’ comments: Although marketed as an Aegean Airlines service, we have allocated the new route as being flown by a regional carrier, which it is – Olympic Air. This means that this segment of the business (as opposed to the other categories of low-cost carriers, leisure airlines and full-service carriers) has now provided 16 water arches so far this year, or 9% of entries. This FTWA wins the weekly trophy…but it was a close-run thing against Birmingham and Växjö…with just 0.2 points splitting all three airports…

Philippines AirAsia Cebu to Shenzhen 9 May 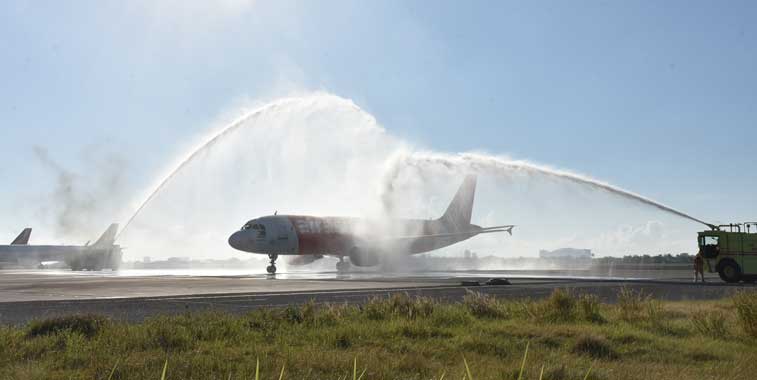 Is that a missing bag or a dead body in the foreground??

Judges’ comments: To say that Cebu was a prolific entrant in last year’s Arch of Triumph is perhaps an understatement, as the Filipino facility sent in a whopping 17 during 2017, more than any other airport in the world. It also managed to win two times, which of course made it all worthwhile. So far in 2018 this is just the second FTWA sent in by the airport, and no weekly victories…

WOW air Reykjavik/Keflavik to Cincinnati 9 May 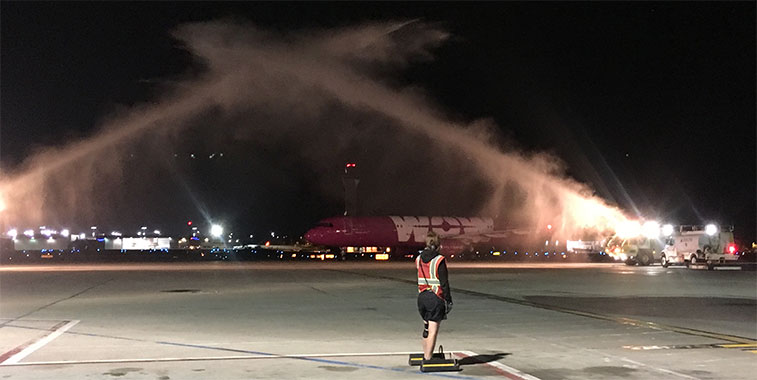 I am going to be in this picture and I don’t care!!

Judges’ comments: We were sent a whole load of pictures from Cincinnati to mark the start of this WOW air service, but only one was of the water arch. We were also sent the airline’s official press release from its US agency…and guess what…of all the images they could select to send out with the press release they chose the one above…with the belligerent apron staff standing front and centre…really?

Philippines AirAsia Clark to Cebu 11 May 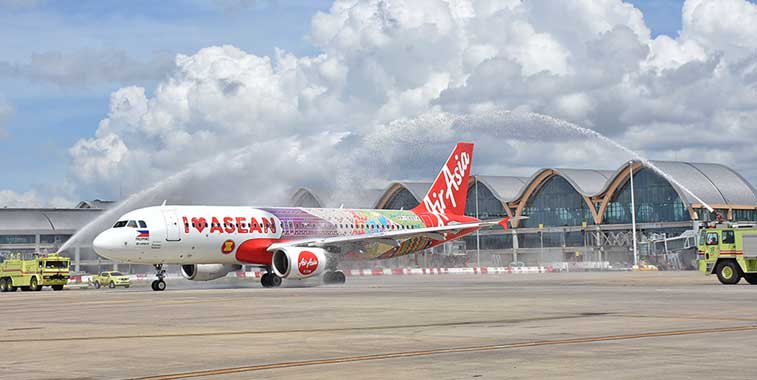 Nice livery on this inaugural flight aircraft…we love ASEAN too!

Judges’ comments: Having written the text for the first Cebu FTWA received on 9 May, just two days later we get the airport’s second of the week and the third so far this year. Is this the start of the Cebu surge? The Filipino airport has a way to go before its passes the current most prolific airport of 2018…which is Alicante…which has sent in six so far… 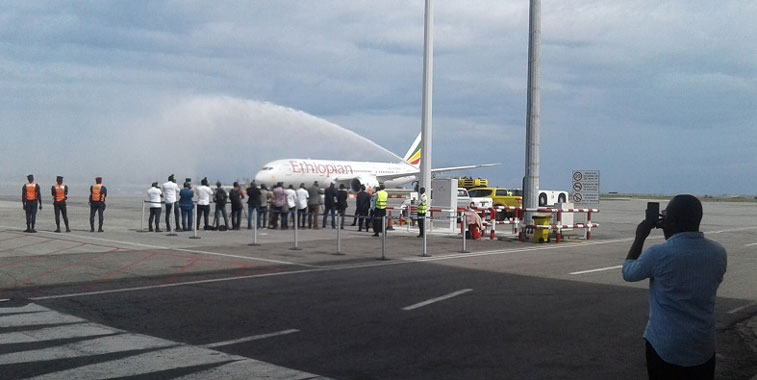 There are 23 people in front of you…get closer to the action!!

Judges’ comments: Our studious data elves (they do all the number work round here) have counted at least 23 people closer to the arriving Ethiopian Airlines aircraft than our photographer. Clearly only special attendees are allowed inside the Tensator cordon that has been arranged on the apron. Next time make sure you get a pass for that area!!

Germania Flug Zurich to Zadar 12 May 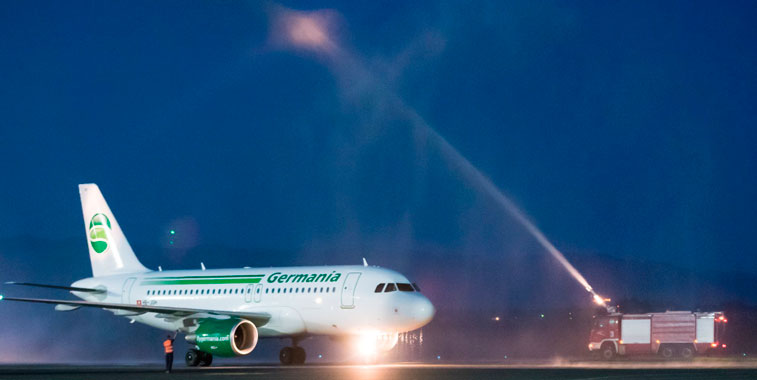 Judges’ comments: Having initially been noticed in the outskirts of London (Southend) before zipping across the Atlantic to Georgia in the US last week, the parallel-parked tender delivering an FTWA has returned to Europe, and is spotted this week in Croatia. Is this phenomenon just going to be as short-lived as the route launch FTWAs themselves…or will it last the course? You will find out here as the summer continues…

Finnair Helsinki to Nanjing 13 May 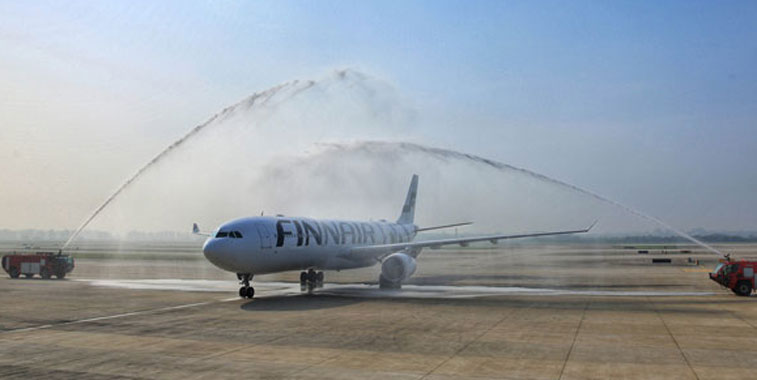 This water arch may have benefitted from a Kardashian-style FTWA…

Judges’ comments: Yet another special livery on a inaugural aircraft. Given the location of the extra details on the A330-300 fuselage (at the rear), a Kardashian-style FTWA, when the picture of the water arch is taken from the rear, may well have been a better approach for this first flight into Nanjing in China. Incidentally, this is the first ever FTWA we have received from the Chinese airport…and its not a bad first attempt either…

KLM Amsterdam to Växjö 14 May 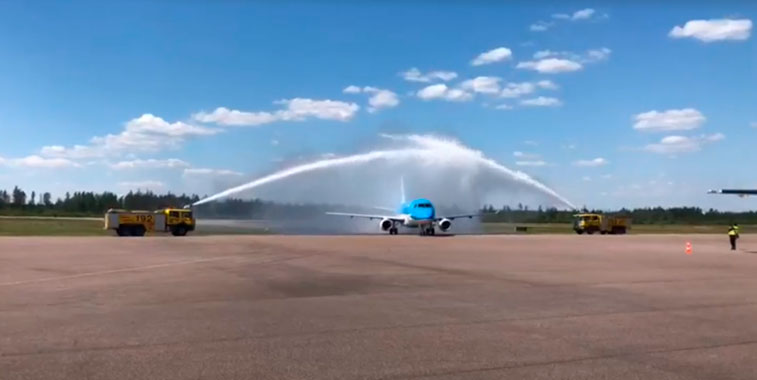 Do they really have 192 fire tenders at Växjö Airport?

Judges’ comments: Ohhhhhhhhh. This Swedish FTWA is just a few feet or a handful of degrees away from being a very good water arch. If the left-hand tender was a bit further from the arriving E175…or indeed if its water jet was just a couple of degrees more acute then this FTWA could have been seriously troubling the top 10…instead it has to settle for third place this week…

Primera Air Birmingham to Malaga 14 May 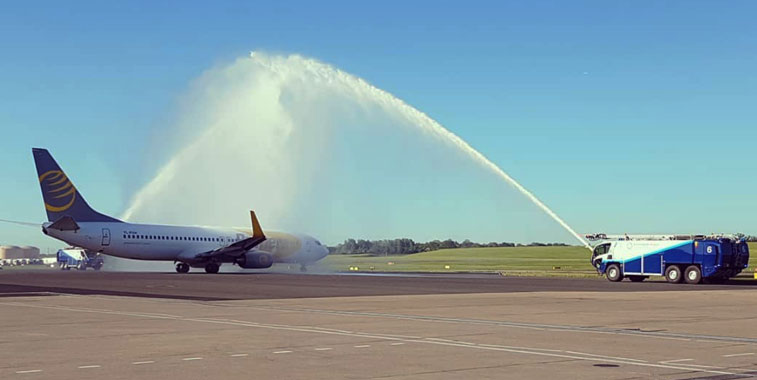 A departing FTWA…rather than the more traditional arriving one…

Judges’ comments: The majority of water arches that the four anna.aero judges receive each week are from the destination airports – clearly as a result of being overjoyed at receiving a new service. However the one above, plus two others from the 10 that have been entered this week are notably from the departing airport. So you don’t need to be a data elf to work out that 30% of this week’s FTWAs have been produced for a departing flight… 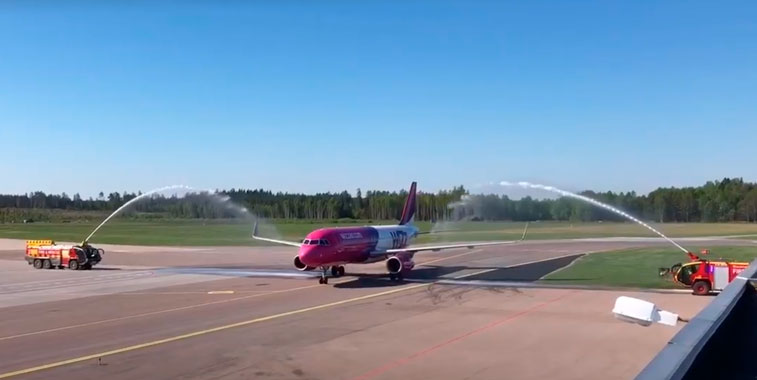 Judges’ comments: There is a timidity to this Swedish water arch for this Wizz Air launch. Firefighters of Stockholm Skavsta – don’t be afraid…crank up the power on those fine-looking tenders and get those water jets to meet neatly in the middle over the aircraft. Instead it looks like they are aiming for the engines…which is not good!!