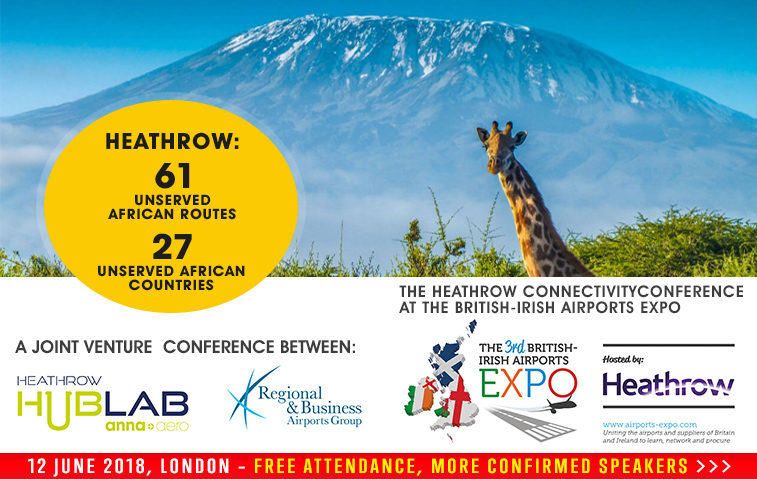 In the latest of a series of analyses leading up to the anna.aero-RABA Heathrow HubLAB conference next month, we take a look at which country markets and routes are missing from Europe’s largest hub airport to Africa and the Middle East. Heathrow HubLAB is the FREE-OF-CHARGE Heathrow Connectivity Conference taking place at the Heathrow-hosted British-Irish Airports EXPO at London Olympia 12-13 June 2018 (200 exhibitors, 3,000 visitors). This FREE event is an important opportunity for airports to find out more about airline plans to provide new services from an expanded Heathrow. The Star Presentation will be made by easyjet’s Group Director of Strategy & Network, Robert Carey, who will explain the plans for a Heathrow easyJet base.

27 Africa countries link to European hubs (but not LHR)

A key benefit of Heathrow Expansion, including a third runway, is to make extra capacity available for new links to underserved markets. This analysis reveals there are 27 countries in Africa with links to other major European hubs, but no connections to London Heathrow. It also highlights six African routes that have been dropped from Heathrow since S08, which might be among the top candidates for new services when extra capacity becomes available, plus the 12 largest unserved African destinations from Heathrow with services to other European mega hubs.

No airport in the world has an easyJet Heathrow service – yet. Airports who want one should come and listen to the star presentation by Robert Carey, Group Director of Strategy & Network, will explain easyJet’s Heathrow base plans.

To put Heathrow’s connections to Africa and the Middle East into perspective, we have considered them alongside those of the other European mega hubs, namely Frankfurt, Amsterdam, Paris CDG and  Istanbul Atatürk, which together with London Heathrow we refer to as the FLAPI airports. An analysis of schedule data for S18 reveals that Heathrow will provide 2.97 million one-way seats to the Middle East. This is second only to Atatürk and represents significantly more available capacity than that on offer from CDG, Frankfurt and Amsterdam. Heathrow will offer 43% more seats to the Middle East this summer in contrast to S08 and will serve 11 countries in the region, equal with CDG and three more than Amsterdam but one less than Atatürk and Frankfurt. Iraq is the only country market in this region that has links to other FLAPI hubs, but has no Heathrow services, being connected to both Atatürk and Frankfurt. There are a number of specific Middle Eastern airports with links to Atatürk, which are not connected to Heathrow, but most of these are not served by Frankfurt, CDG or Amsterdam either, suggesting some could be niche markets that work due to their proximity to the Turkish hub. Since Heathrow is already well connected to the Middle East, Africa will be the main focus for new route opportunities in this analysis.

The table below shows how the FLAPI airports compare in terms of connections and S18 capacity to Africa, along with their capacity growth since S08. Heathrow is connected to 12 African countries and 16 destinations. It is the largest FLAPI origin airport for just four of these destinations: Addis Ababa, Cape Town, Johannesburg and Lagos, and the only one with a link to Luxor.

Heathrow and Africa: down 20%; well behind Istanbul, Paris

Heathrow is connected to fewer African country markets and individual destinations than all of the other FLAPI hubs. CDG leads the way with 32 countries and 53 airports served this summer, followed by Atatürk with 24 countries and 39 airports. Heathrow will offer the third-most capacity to Africa among the FLAPI airports in S18, slightly ahead of Frankfurt and Amsterdam, but considerably behind Atatürk and CDG, with the Paris hub providing 140% more seats.

Back in S08, Heathrow was second only to CDG in this market, but since then its departing seats to Africa have been cut by 20%. It was the only FLAPI hub to see a reduction in capacity to Africa from S08 to S18 with Atatürk growing rapidly as Turkish Airlines expanded its hub operation, and CDG, Frankfurt and Amsterdam all seeing an increase in African capacity of around one-third or more. Heathrow has subsequently been overtaken by Atatürk, caught by Frankfurt and is being reeled in by Amsterdam in terms of departing seats to Africa. A lack of capacity at Heathrow is likely to be the major contributing factor for the decline in African services.

In total, there are 27 African countries and 61 airports with services to at least one FLAPI hub, but no connections to Heathrow in S18. Clearly not all of these destinations will be viable from Heathrow, since there will be very specific city and country pairs in which demand is influenced by shared cultural and economic ties, some of which have been born out of Europe’s colonial past. Nevertheless, these destinations are a good starting point when identifying potential demand for additional African links from Heathrow.

The below table lists the top 12 African destinations based on combined capacity from the FLAPI hubs in S18, that do not have a direct service from Heathrow. The largest of these is Marrakech, which is already served from Amsterdam, CDG and Frankfurt. Four of the five largest destinations are in North Africa. Seven of the top airports already have links to more than one FLAPI hub. The largest country market with FLAPI links but no Heathrow service is Tanzania.

Six African routes have been dropped from Heathrow since S08: Dar es Salaam, Dakar, Entebbe, Freetown, Lusaka and Tripoli. Some of these could be candidates for reinstatement when additional capacity becomes available. The largest African airport (based on departing capacity in S18) without a direct connection to Heathrow is Durban in South Africa. This will soon be rectified with British Airways recently confirming its intention to begin serving the airport pair three times weekly in W18/19.

This analysis uses data from countries based on OAG’s classification of the Middle East and North, Eastern, Southern and Central/Western Africa. When capacity for these regions is combined, eight of the 12 largest country markets from Heathrow in S18 are in the Middle East, with only four (highlighted in orange) in Africa. The UAE tops the table with more than twice as much capacity as the next largest market. The biggest African market from Heathrow is South Africa, with Johannesburg being the single largest destination. Heathrow’s four largest African country markets – South Africa, Nigeria, Egypt and Kenya – will account for 72% of the airports departing seats to the continent alone this summer. 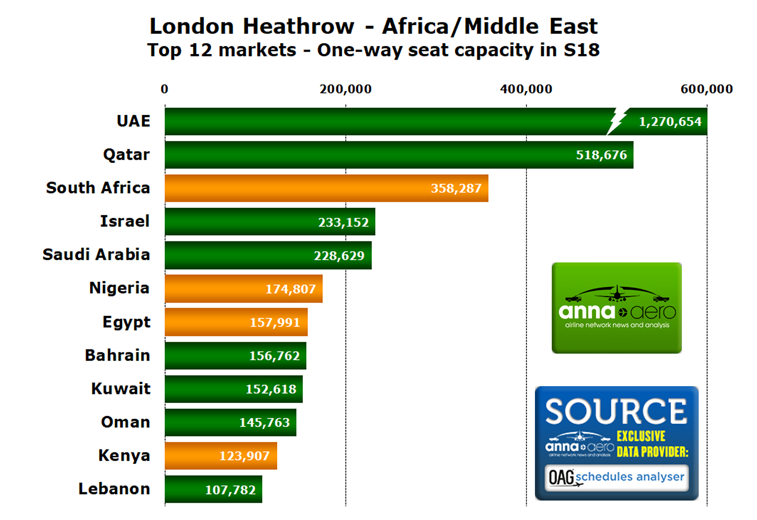